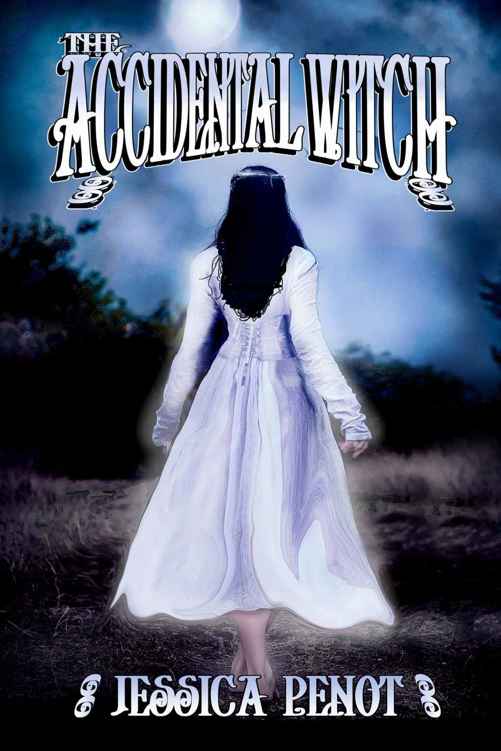 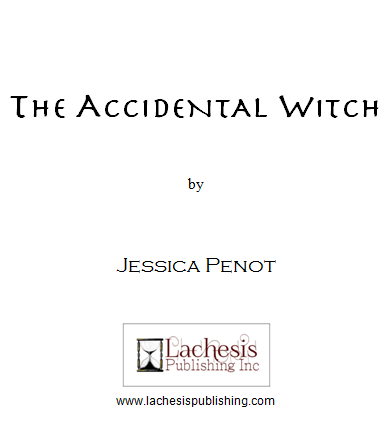 All rights reserved. The use of any part of this publication reproduced, transmitted in any form or by any means, electronic, mechanical, photocopying, recording, or otherwise, without the prior written consent of the publisher, Lachesis Publishing Inc., is an infringement of the copyright law.

A catalogue record for the Ebook is available

from the National Library of Canada

Ebooks are available for purchase from

This is a work of fiction. Names, characters, places and incidents are either the product of the author’s imagination or are used fictitiously, and any resemblance to any person or persons, living or dead, events or locales is entirely coincidental.

I would like to thank my agent, Sharon Belcastro, and my editor, Joana D’Angelo for their help in making
The Accidental Witch
possible. Their support in this endeavour has been invaluable. I would also like to thank the authors of two wonderful books,
Spells for the Solitary Witch
by Eileen Holland and
Encyclopedia of 5000 Spells
by Judika Illes. These books helped me create a world of spells for Phaedra.

A
LSO
A
VAILABLE

T
HE
A
CCIDENTAL
W
ITCH

It is amazing how the most world-changing days can seem entirely mundane to begin with. Friday the 13
th
seemed no different than any other day to me. I woke up late, as always, and rushed to get dressed and make it to the car with my usual box of animal crackers and diet cola. I pulled my shoes on as I backed out of the driveway and ate while I drove to work.

I was late to work, but just early enough to not be noticed as late. The small hospital where I worked was a blip in a vast nowhere and the small psychiatric floor I worked on was a blip in a blip. I was a blip within a blip within a blip, making me practically nothing. I could’ve died in my sleep and the world would barely belch. I liked to think that I was good at what I did. I liked to think that even though I was a nothing, I made a difference in the patients’ lives. I was one of those deluded people that believed in saving the world one person at a time. I guess I still am. Certainly, I was one of the few people that actually cared about the patients. The management didn’t care that I cared. Management was too busy trying to balance the books and keep the floor profitable to care what the staff did with the patients. I could take all the patients outside and have them moo like cows and management wouldn’t care as long as I billed it as a recreational therapy group and got the proper reimbursement.

“Hey, Phaedra,” Millie said as I walked onto the locked portion of the floor. My keys jingled against my chest as I walked towards the nursing station. I was one of five therapists that covered the psychiatric floor. I never really saw the other five therapists because the hospital was too cheap to ever have more than one therapist working at a time, but I knew the other therapists existed somewhere out there in the same kind of way you know an atom exists without ever seeing it.

I smiled as I approached Millie. I was used to smiling when I didn’t mean it. That is what being a therapist is. It is putting your own feelings aside so that other people can find happiness. At least, that is what it is supposed to be. That is what I wanted it to be.

“All bullshit as always,” Millie said in her thick southern drawl.

Millie was one of those people who wasn’t happy unless she was complaining about something.

“Sorry about that,” I said with a small smirk. “What’s going on?”

“We have Kara Watson again,” Millie whined. “I swear if they admit that girl one more time, I’ll kill her myself. She’s just doin’ this for attention and she ain’t right for our floor.”

“What’s she doing for attention?” I asked

“She’s in there bangin’ her head on the wall and expecting me to care,” Millie said. “She shouldn’t be here.”

I couldn’t figure out who Millie thought would be right for the floor. It was like she didn’t really realize that the psychiatric floor was where crazy people were supposed to be. She thought that all the crazies that came and went through our doors acted out just to annoy her. All their suicide attempts and hallucinations were an elaborate ploy just to make her day shitty or get something from her. Although, I couldn’t imagine what anyone would want from Millie.

I walked down the hall to room 101A where Kara Watson sat on her small white bed sobbing and slamming her head against the wall. Large tears bubbled down her plump cheeks and puddled on her bosom. Kara was more than plump. She was fat in that way that made other fat people look thin. The fat kind of rolled off her like dough.

“But you were doing so well,” I said.

“There’s no reason for me to be alive. Why can’t you people just let me die?”

“I got nothing to live for,” she said.

“You have yourself to live for,” I said. And that was a lot. A whole lot.

“Well, that ain’t much,” she snapped.

“Your little ones wouldn’t want you to give up like this,” I whispered.

“You still have a son and a husband and they need you,” I said. “You can’t give up. You have to keep fighting for them.”

“I’m so glad you’re here,” Kara said. “Nurse Ratchet is on a rampage this morning.”

I laughed. Kara always called Millie “Nurse Ratchet”. The patients hated a few of the nurses, but they hated Millie most of all. Many of the other nurses were curt and blunt and assumed the patients were all lying losers, but they did their job with professionalism. Millie, on the other hand, snarled at patients when they asked for any kind of help. She sat behind her desk typing notes and making the patients’ lives a living hell. I had no power to do anything about Millie, so I made my peace. Management didn’t care. They would have staffed the Devil himself if he was good at billing and paperwork. I had once asked my supervisor what to do when the patients complained about the nurses. She told me to nod and smile. That was our official policy—don’t complain, just nod and smile.

“Does she have good moods?”

Kara nodded and turned away from the wall. She looked at me with eyes bluer than the ocean. When I looked in her eyes, I could see through the fat and self-abuse to the woman underneath. I could see her as she used to be. I had seen the pictures. Before her twin daughters died, Kara had been lovely, and slim, and athletic, but years of depression had eroded that as surely as a river carves out a canyon.

“I’ll see you in group? It starts in ten minutes.”

I walked back out to the nurses’ station and looked through the charts. I checked to see which paperwork I needed to do and which patients needed individual sessions. It was going to be a long day. Bob had worked the weekend and he didn’t like to work with patients. He liked to sit behind the desk with the nurses and shoot the shit. Bob was a licensed counselor, but I couldn’t imagine why he’d gone into it. He seemed about as concerned about the patients as Millie. I hated working after him. It was like doing two days work in one day.

The floor was full. Every bed was taken. They always were. There weren’t enough psychiatric hospitals in Alabama, let alone rural Alabama. Mostly, unless your family was willing to commit you, you would slip through the cracks. The people on our floor, despite its flaws, were the lucky few. Suicide is the eighth leading cause of death in Alabama. Those on our floor were the few that someone cared enough about to save or who were just lucky enough to attempt suicide on a day when we had beds open.

The morning support group was a crap shoot. It was one of those things that can sometimes reach people in such a profound way that it almost seems divine and can sometimes piss people off in such a horrible way that you just have to dodge the obscenities being flung in your general direction. The moment I walked into the group room, I could tell it was going to be a crap-dodging day. All our regulars were there. The regulars are the ones with the good insurance that the psychiatrists will directly admit because they have good insurance, or the ones that spend so much time driving the ER doctors crazy that the ER doctors force the psychiatrists to admit them under penalty of death. Ironically, these lucky few, the regulars that get help more than they deserve when others get no help, are usually the whiniest, most complaining, miserable people that can climb up out of the crazy bin.

“Good morning,” I said cheerfully to the group. I scanned the group quickly. Wayne Braselton was there. He was one of the regulars. Everyone knew everything about him. His wife had killed herself last year and his son had shot himself in the head a few days later. It is a strange coincidence that oftentimes the floor seems filled with the same types of people at the same time. Looking over the room, at least five of the people there had someone die on them in the last three years. Last week the group had been all rape or incest survivors and the week before, they’d been all Iraq war veterans. It came in waves and I never understood why, but in my heart, I believed it was fate.

“What are you doing back here, Wayne?” I asked directly.

Wayne just started sobbing. Big fat tears rolled down his face. “I just want to die now,” he said. “Why can’t I die?”

“Did you try to kill yourself again?” I asked.

“I took all my clonazepam,” he wailed. “I should be dead. Why aren’t I dead?”

Kara leaned over and put a hand on Wayne’s shoulder. “It gets easier,” Kara whispered.

“What do you think, Kara? Can you help Wayne accomplish his goal of playing cards today?”

“I know you do, sweetie, but you know how you feel right now?” I said.