Read The Adventures of a Love Investigator, 527 Naked Men & One Woman Online

The Adventures of a Love Investigator, 527 Naked Men & One Woman 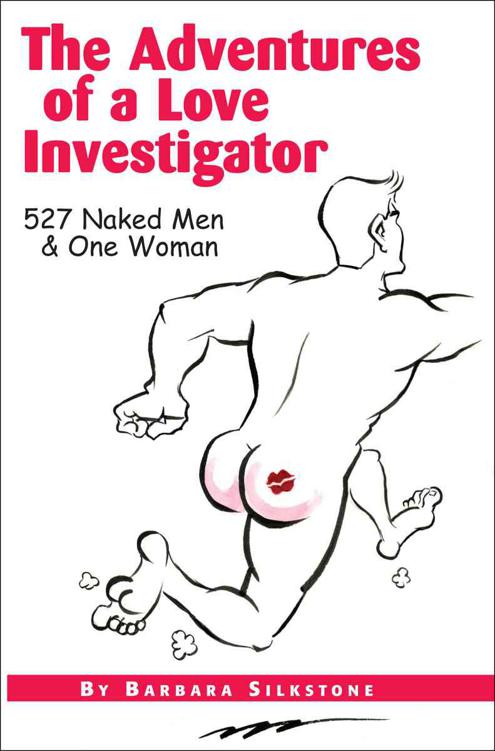 The Adventures of a Love Investigator

All rights reserved. No part of this publication may be reproduced, distributed, or transmitted in any form or by any means, or stored in a database or retrieval system, without prior written permission of the author. This eBook is licensed for your personal enjoyment only. This eBook may not be resold, returned, or given away to other people. If you would like to share this book with another person, please purchase an additional copy for each person you share it with. Thank you for respecting the hard work of this author.

Although every precaution has been taken in the preparation of this book, the publisher and author assume no responsibility for errors or omissions. Neither is any liability assumed for damages resulting from the use of the information contained herein.

This is a work of true fiction. The identities of the men and women interviewed have been altered or disguised at their requests.

The following story is based on my real-life adventures as the Love Investigator. Names have been changed, identities disguised, and situations re-situated all in the interest of saving my skin. These interviews do not reflect my personal opinions except when I’m caught mumbling under my breath.

Books in the Fractured Fairy Tales by Silkstone series:

The Secret Diary of Alice in Wonderland, Age 42 and Three-Quarters

Wendy and the Lost Boys

The Secret Diary of Alice in Wonderland, Age 42 and Three-Quarters has been a consistent best seller in comedy. Both Wendy and Alice have been in the top 10 Amazon comedies.

This book contains bonus excerpts from

The Secret Diary of Alice and Wonderland, Age 42 and Three-Quarters

Wendy and the Lost Boys

“Marriage beats the dignity out of people.”

I sat in the witness box feeling like a kid in the principal’s office. “Just answer the questions, don’t make any comments,” the divorce court judge said.

“But whether I’ve been married once before has nothing to do with this case. All I’m asking for is the return of my house and all my other premarital assets. And I’m requesting a refund of the all money I loaned Steve for his business. It’s only fair.” I tucked a strand of red-blond hair behind my ear and leaned forward, riding the judge with my stare.

Steve’s lawyer, Howard Dewey, shot Judge Cheatum a raised eyebrow. Former law partners, they could read each other like bad novels. Cheatum had denied my motion for him to step down as judge from my case stating there was no conflict of interest. If it looks like a conflict and it quacks like a conflict... it’s a conflict. I was in deep waters and paddling hard.

Lawyer after lawyer had turned my representation away explaining – off the record – that there was no winning where Dewey was the lawyer and Cheatum was the judge. Florida was a no-fault divorce state. At the age of forty-two I was about to learn a big lesson.

Dewey handed me a paper. “Do you recognize this?”

“Yes, it’s the sworn statement of Steve’s bookkeeper attesting to the checks I gave her when he needed money for his business.”

“Was I present when you took her deposition?” Dewey asked then he turned and walked away, his air of practiced anger coming across like the lead in a school play.

“Look at me when I’m answering you,” I said to his well-tailored backside.

The lawyer reached in his jacket pocket and took out a cellophane bag of lemon drops, ripped it open, approached the bench, and offered the candy to Cheatum. They rattled the bag and crunched the lemon drops, the sound magnified in the judge’s microphone. They were telling me my words held less value than sour candy. This could only get worse.

Steve was my second husband, my second mistake. From the time I was five I’d had more than my share of marriage proposals. Twice I chose to accept and twice I regretted it. Now I sat in a witness box playing masochist to their candy munching misogynists.

Why had I made such lousy decisions? Was it a talent I could unlearn? Most of my dearest friends were guys. They were easy to talk to and great listeners. Yet when it came to accepting husbands I picked the users and the losers. Why didn’t men come with instruction manuals? Was I the one who was going to have to write one?
Understanding the Male Mind –
I could see it now.

The idea of a mass head invasion, of being the profiler of one thousand guys came together with the pieces floating in and out of my consciousness for months after the Steve-divorce was final. I began to feel the need to dissect and compare the guts of men to see what makes the rotten ones so awful and the good ones so hard to come by. I could see myself pulling out body parts and pinning them to crime scene boards with little labels, the heart of a liar, a good man’s spleen.

Thanks to Judge Cheatum’s ruling, I lost my home, which I’d owned alone for ten years prior to my marriage to Sleazy Steve. My ex had managed to pick up all the chips on the table in a way that made me question our legal system, the institution of marriage, and the very fabric of reality. Scarred, battle-hardened and weary, I was rendered temporarily homeless. It was time to visit old friends and rediscover my chi.

Sal’s my best friend. I fly out to Los Angeles for a stay at his place. We’re in his kitchen, conducting an autopsy on our lives. I’m leaning against the refrigerator trying not to knock off his memories and memos. My buddy is sitting hunched over coffee at the breakfast table.

A decade younger than me, at thirty-two Sal looks like a puppy in need of grooming. He has dark flashing eyes and white flabby arms. He never lifts anything heavier than a coffee mug.

“I just don’t get it,” he says. “I’m not a geek or a loser. If I were a woman I would rate me a high nine on any woman’s one-to-ten scale. I have most of the popular options: looks, talent, great sense of humor and I can be damn compassionate when I need to be. I even iron a mean shirt. I used to be a hot item. What did I lose and when did I lose it?”

One glance around his apartment and I can understand a lady’s reluctance to get closer to Sal. His taste is circa
Dracula Meets the Wolfman.
My friend writes movie screenplays, he keeps plastic skulls and demented ceramic dwarfs around for inspiration. I’m not in a position to critique his lifestyle as my track record isn’t anything to brag about.

Feeling nostalgic I push the conversation in another direction. “Remember what it was like being in love for the first time?” A brilliant memory-photo flashes before me of a tall, thin, seventeen year old guy with Clark Kent glasses and a smile that sent warm, snuggly things dancing in my body. His name is Mark.

“Lauren,” he says. “She was crazy about me. I should have taken advantage of her innocence and married her after graduation. We’ll never be that dumb or that young again, too much sludge under the bridge.” Sal refilled our coffee cups and settled back with a weary groan.

I sip the steaming coffee tentatively. “My first love set a standard for happiness I can’t ever duplicate. I think I just gave up and applied logic and pity to all my relationships after that. I wonder if Mark would have made me happy? All my friends who married their high school sweethearts are still wed and they act like they’re on their honeymoons. I don’t understand it.”

“Times have changed. People are different. We’re a mobile society. The wrong people can slip in and out of your life like a cat through a picket fence,” Sal said.

“Do you think anybody gets it right?”

“Maybe the ones who never move on are lucky. They stay surrounded by the same people they grew up with. Maybe that’s what makes the difference – the ones who spend their entire lives in their hometowns with the same friends. Maybe that sort of married couple grows at the same pace.” Sal lights another cigarette. His apartment reeks. I can actually see his ashy breath.

A headache rolls in like a thundercloud, and a chill-glob forms in the center of my chest. Is this all life has to offer any of us? Do we outgrow and shed love like a snake drops its skin? Move on to the next affair and hope the breakup doesn’t hurt as much?

An image of Mark comes into my mind again. I wonder if he’s alone tonight or if he’s holding someone he loves. I know my aching heart is seeking the familiar. I’m looking for the first and last time I was really happy.

“I’ll bet if I asked a hundred men about love, I’d find the real thing. It has to be out there. Too many people claim to have found it. I can get men to open to up to me, it’s always been easy.” My mind kicks into high gear. Once it gets like that I scare myself with my enthusiasm and lack of planning. “I’ll just let a thousand men get emotionally naked and take notes. Maybe I’ll write a book and call it...
Naked Men
.”

“I think love is a place of certainty that allows for constant change.”

Kurt leans over the table, all but making it disappear. Thirty-five, of German-Italian stock, everything about him is large. Broad-shouldered, with a full head of curly dark hair, he uses his deep green eyes to propel his thoughts, his smile is boyish, the eternal grin of the big affable kid. If he’s faking sincerity, he’s a pro.

We’re in Jerry’s Famous Deli on Ventura. Around us, the usual L.A. backwash chows down. A couple of ‘big names’ walk by, but I’m so confident, I don’t even look at them ... much. I’m faking being cool on the outside, while inside I’m jumping up and down screaming “Look at me!” This can’t get any better.”

It’s afternoon, and Jerry’s is a zoo. Bottom feeders and wannabees ply air kisses and hugs side-by-side with their real-deal heroes. The white noise of ambition only notches down momentarily when their food is delivered. Booths of oak hug the walls, sardine-packed tables creating narrow little alleys for black-garbed people to slink through. Metal dishes of pickles and sauerkraut appear automatically at each table, as if triggered by the weight of well-toned butts on the red vinyl seats. I’m having second thoughts about meeting him here. We have no privacy and I do want answers.

Kurt doesn’t appear to care. He’s wearing a green plaid shirt with the sleeves casually torn off. His blue-jeaned legs sprawl on either side of the table. A rock musician, recording engineer and producer, he’s just given me a demo tape from his latest band, the Navajos. Sal said their sound is earthy and powerful. Our conversation is veering into sex, and the two teenage Valley squabs at the next table catch our drift, inadvertently eavesdropping. They toss their long, lemony hair for Kurt’s benefit. He ignores them.