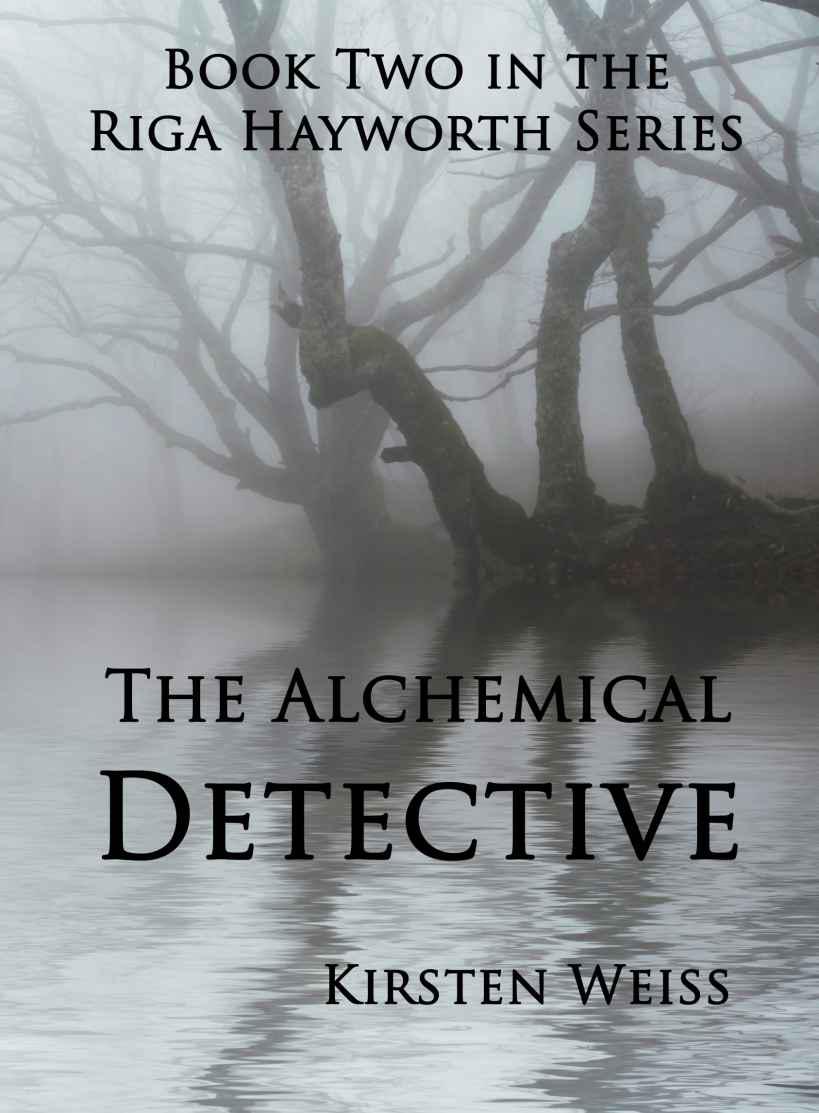 This book is a work of fiction.  Names, characters and incidents are either the product of the author’s imagination or are used factiously.  Any resemblance to actual persons, living or dead, is entirely coincidental.

Copyright ©2012 Kirsten Weiss.  All rights reserved, including the right to reproduce this book, or portions thereof, in any form.  No part of this text may be reproduced, transmitted, downloaded, decompiled, reverse engineered, or stored in or introduced into any information storage and retrieval system, in any form or by any means, whether electronic or mechanical without the express written permission of the author.  The scanning, uploading, and distribution of this book via the Internet or via any other means without permission of the publisher is illegal and punishable by law.  Please purchase only authorized electronic editions, and do not participate in or encourage electronic piracy of copyrighted materials.

The publisher does not have any control over and does not assume any responsibility for author or third-party websites and their content.

“He who fights with monsters might take care lest he become a monster.  And if you gaze for long into an abyss, the abyss gazes also into you.”

– Friedrick Nietsche, Beyond Good and Evil

The egg quivered, then rolled, seemingly of its own accord, to the edge of the counter.

Riga stared at it, her violet-colored eyes narrowed in concentration.  Magic, she reminded herself, was a matter of will and she had that in spades.  However, it was also a matter of focus and in this area, she was lacking.

The egg trembled, then slowly rose into the air; one inch, two inches, five.

The egg exploded, splattering the gargoyle with shell and yolk.

Brigitte shrieked, the sound of rocks scraping against each together.  “Faugh!  Water!  Bring ze water!”

Riga hurried to the sink and turned on the tap, frustration wrinkling her brow.  She grabbed a dishtowel and soaked it in warm water.  Her hands trembled and Riga swore under her breath.  Two months ago, this would have been easy.

At first she’d thought her magic was gone.  Now Riga knew it had gone haywire and her rehab attempts weren’t working.  If anything, her magic had become more unpredictable, more dangerous.  She only dared practice with Brigitte because the centuries-old gargoyle was made of stone.  But even Brigitte wasn’t indestructible.

Someone beat upon the front door and Riga whipped around, startled.  She should have sensed whoever was coming up the steps.  Another small failure.  More pounding; the cheap wooden door vibrated beneath the blows.

Gargoyle and woman looked at each other.  Woman acted first.  Riga tossed the towel in the sink.  “Don’t move,” she said to Brigitte.

“But ze egg.  It dries like cement,” Brigitte wailed.

“Later.”  Riga hurried to the door and flung it open.  A chilly blast of pine-scented air swept inside, tossing Riga’s auburn hair and stinging her skin.

Two sheriffs stood before her in wide brimmed hats and heavy dark brown parkas.  Riga might have taken them for rangers had it not been for their belts, strapped with weapons, slung low on their hips.  The older one had his fist raised for another round of door pummeling.  He lowered it with what looked like regret.  He was bulky, bearlike, with steel blue eyes, and she imagined he enjoyed making the door shiver beneath his fist.  The tag under his badge read: Sheriff John King.  The badge itself: El Dorado County.

“I banged my shin on the coffee table,” Riga said.

“Are you alone?”  He peered over Riga’s shoulder.  It wasn’t hard – Riga was five foot six, and he stood well over six feet tall, imposing in every direction.

“Yes.  Can I help you?”  Riga didn’t budge, unwilling to let them in.  It wasn’t that Riga didn’t like cops; she was friends with plenty of them, when they were out of uniform.

She quirked her lips.  “Now you’re just embarrassing me.”

The Sheriff looked at her.  She returned his gaze.  The silence stretched between them.

The Deputy coughed.  “Are you Ms. Hayworth?” he asked.  Riga figured him for his early thirties, which meant she had a decade on him.   He was well built, and between the startling pale blue of his eyes and the chiseled planes of his face, would have looked at home on a magazine cover.  But Riga’s gaze was drawn to the Sheriff.  The Deputy had youth, the Sheriff had presence.

“My name is Night, Deputy Night.  May we come in?  Please?”  He smiled ruefully, exposing dimples and gleaming white teeth.  “It’s kind of cold out here.”

Riga hesitated.  But she wasn’t wearing a coat and was freezing in the doorway.  She could feel the heat from the cabin oozing past her, out the door.  “Okay.”  Reluctantly, she stepped back, and allowed them past her.

Hands resting on the butts of their guns, they prowled the room as if they owned the place.  They could have it, for all Riga cared.   It was one of the lower-end tourist cabins, crammed with a mis-matched jumble of seventies era furniture.  A giant picture window looked out upon a forest scene:  pines, and patches of snow wetting the ground.  The afternoon sun slanted low in the sky, sending beams of light glittering through damp tree branches.

Brigitte, still covered in egg, had shifted to face the cabin’s small living room.  The deputy stared at the gargoyle, walked to Brigitte, and ran his hands across her stony feathers as if in a caress.  Brigitte would love that, Riga thought.

Night tucked his hat under one arm, and ruffled his blond hair with his free hand.  “Do you know it’s got egg on it?”

“Forget the statue,” the Sheriff barked.  Turning, he stumbled over a cheap American-Indian themed rug.  “Miss Hayworth, may we sit down?”

She indicated the lumpy sofa, a cruel gesture given the state of its springs, but she didn’t want them to linger.

They sat.  She remained standing.

The Sheriff removed his hat and put it on a nearby coffee table, covering decades of coffee rings.  “Riga Hayworth.  Is that your real name?”

She raised an eyebrow.  “If you mean, did my parents choose it?  Yes.”

“Funny sort of name,” King said.  “Like that old movie star.  Were your parents fans?”

She shook her head, no.  Not after she’d grown to look more and more like the screen siren; that had disturbed her parents, made them wonder if they’d really picked the name or if the name had picked their daughter.  Riga’s resemblance to Rita Hayworth was uncanny; auburn hair, arched eyebrows, and olive skin.

“How well did you know Sarah Glass?” King asked.

Riga looked at him blankly.

“The palm reader?” Riga asked, surprised.  “Not at all.  I think she’s a member of the Tea and Tarot group.  She didn’t show at last week’s meeting, which was my first, so I never had a chance to meet her.”  Riga had forced herself to attend for the first and probably last time.  She wasn’t a joiner.

Now, Riga knew, she was supposed to ask why the police wanted to know about Sarah Glass.  But the cops weren’t here to satisfy a casual curiosity.  Something bad had happened and Riga wanted to put off learning what it was for as long as possible.  Though her magic had gone awry, she sensed the tug of something dark and inexorable moving towards her, and didn’t like the feeling.

“The local metaphysical professionals meet twice a month to talk shop at the Fortune Teller’s Café.”

“Who was there last week?” the Sheriff said.

“The owner of the café, Tara, was there.  She reads cards.  Lily, a tea leaf and palm reader was too.  And so was an astrologer, Audrey.  She also has an energetics practice.”

The Sheriff drummed his fingers on the nearby table.  “I hear you’re a P.I. of some sort, did some consulting for the Oakland police.”

Riga crossed her arms, thinking.  The Oakland connection was an odd one for them to pick up since she’d lived in San Francisco.  The SF cops would have been a more obvious reference.  “I’m a metaphysical detective and I have a California investigator’s license.  I’m not licensed in Nevada.  How did you hear of it?”

“Cops talk,” the Sheriff said.  “They said you knew how to keep your mouth shut.”

It wasn’t exactly a rave review, but she couldn’t blame the Oakland PD.  It had been an unusual case, even by her standards. She was surprised they talked about her at all.  “Are you looking to hire a consultant?” Riga placed a subtle emphasis on the word “hire.”  She’d come here for an extended vacation, but turning it into a work trip held a certain tax deductible appeal.

In response, the Sheriff unzipped his parka and pulled out a manila file folder.  From it he withdrew an eight by ten photo.  He extended it towards her.

Okay, she thought: he wanted to see what a metaphysical consultant could do.  She took the photo, and returned to her spot against the counter beside the gargoyle.  Riga held the picture before her so Brigitte could view it: a black and white glossy of a metal disk with a symbol impressed upon it – two concentric circles with oddly shaped letters and symbols drawn between the two and a square grid in the center overlaid with jagged lines.  The expression on her face flickered, then stilled.

“You know it?” the Sheriff said, leaning forward in his seat.

She grimaced in distaste.  “It’s a sigillum used to summon and control a demon when you don’t know the demon’s name,” she said.  “The style is similar to the Sigillum Dei Aemeth created by John Dee but there are key differences which make this unique.  There was a man in Paris who used a system like this, invented it in fact, named Francois Lefebvre.  The Parisian police will have a file on him.  He died five years ago in a fire.  Lefebvre didn’t take students, wasn’t the type to share, but he had servants.  They may have learned his technique.”

“How did you learn it?” the Deputy asked.  He was taking notes and turning a pencil between his fingers.  His hands were calloused, roughened by work, and she imagined the young man swinging an axe, splitting firewood.

“I never said I learned it,” she said.

Twice-Told Tales by Nathaniel Hawthorne
Ghost at the Drive-In Movie by Gertrude Chandler Warner
Caprion's Wings by T. L. Shreffler
At the Bottom of the River by Jamaica Kincaid
My Biker Bodyguard by Turner, J.R.
Dark Side of the Moon by Sherrilyn Kenyon
The Lammas Curse by Anna Lord
Hurt Go Happy by Ginny Rorby
Whatever You Love by Louise Doughty
Out Late with Friends and Regrets by Egerton, Suzanne