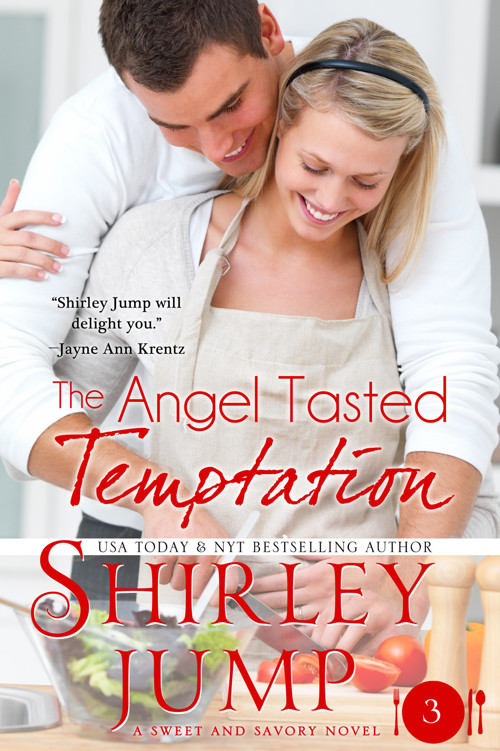 A Sweet and Savory Novel

This is a work of fiction. All of the characters, organizations, and events portrayed in this novel are either products of the author‘s imagination or are used fictitiously.

Original version published in 2005 as The Angel Craved Lobster

Check out the entire Sweet and Savory Novel series:

Other books by Shirley:

Return of the Last McKenna

Get your groove on, baby, before you start cooking. You want to make a good impression for the ladies so they'll tip you better. Can't let that guitar-strumming, Stetson-wearing wannabe-star in New York City get all the attention, now can you?

Start by cooking the bacon until crisp in a heavy stock pot. Don't do this part naked! Frying bacon can be very dangerous to your performing career, so be sure to stay clothed until you're doing a safer activity.

Once the bacon's crispy, add the onions and celery. Sauté until the vegetables get all wilty. The vegetables, now, not you. Next, add a little seasoning. Start with some salt and pepper, then toss in the bay leaf and thyme. Shimmy those hips as you do—it's good practice.

Sprinkle the flour over everything and cook for two minutes, stirring the whole time, wiggling hips and spoon all at once. If needed, put on Uncle Kracker's latest and sing along. Add the potatoes and the clam juice, then get everything hot and boiling for a minute. Turn the heat down, let it simmer and wait about ten to fifteen minutes until the potatoes are nice and tender.

All frying dangers are over now, so if you're more comfortable in your skivvies, by all means get down and dirty for the rest. Once your potatoes are tender (just your potatoes, not the rest of you), add the cream and cook for a minute or two before putting in the clams.

Keep simmering, until those little New England babies are cooked through. Spice it up as needed with additional S&P, then serve to someone you want to impress—while you provide the serenade, of course. Don't forget to remove the bay leaf. Choking your guest isn't cool.

And if she wants to tip the chef, remember to shake 'em good to get every last nickel out of her!

One of the first things to greet Meredith Shordon to Boston was a man in a pair of Fruit of the Looms, playing a set of bongos.

She'd come here looking for a man—but not one like that.

Meredith stood in the middle of the bustling airport subway stop and stared. Exactly like every other tourist beside her. If there was one thing she hadn't wanted to do, it was look like a gaping Midwesterner who'd never seen a big city in her life.

Well, there went
that
plan.

Heck, she'd been gaping since she left Indiana. First, there'd been the quartet of Patriots fans who'd been on the second leg of her flight, returning from an out-of-town game. They'd brought the ongoing celebration with them, from the red and blue stripes painted on their faces to the way they yelled "Go Pats!" at odd times, like they had a rare, two-word form of Tourette's syndrome.

Then, the clouds had parted and revealed the massive skyline through the oval window of the jet.

She'd forgotten the NFL fools behind her and stared at the massive stone behemoths of Boston's skyline. It looked more like Neptune than Heavendale, Indiana, where she'd been a few short hours ago. There were none of the wide expanses of green land and patchwork quilts of farms she was used to.

She'd stopped staring long enough to get off the plane and through the overwhelming crush of people to meet her cousin's friend, Maria Pagliano, and to claim her baggage without looking too much like a bewildered farm girl.

The man tum-tummed on the two drums hanging from a leather strap around his neck, his long, dark, curly hair swinging in concert. He danced to the rhythm, a contented smile on his face, as if bongoing hit a high sex never could.

He caught Meredith's stare, hit his bongos harder and thrust his slim hips to the left, toward a big white bucket with a handwritten sign that read
Tips for the Hips
.

Meredith drew her caramel leather trench coat closer around her, resisting the urge to button up. She hadn't seen a man this naked since she'd walked in on Bobby Reynolds getting his football physical at the end of senior year.

Unfortunately, she'd opened the locker room door right in the middle of his hernia screening.

For two years after that, she'd been unable to look Bobby in the face. Or eat pork products ever again.

"Don't give a dime to Bongo Boy," Maria said, grabbing Meredith's arm and hauling her away. "He makes more than most investment bankers."

"He does?" Meredith craned her head over Maria's, casting one last look at Bongo Boy's swiveling anatomy.

"There's a naked man playing guitar in New York?" Geez. She needed to travel more. Scratch that. Travel, period, considering this was only the second time in her life she'd left Indiana, if she even counted that trip to the Ohio State Fair.

And this time she hadn't
left
. Exactly. More like
run away
. She'd abandoned a whole lot of people's expectations, leaping at the chance for something new, exciting, different.

She just hadn't expected the first exciting thing she saw to be a man in his tightie whities pounding out
Yankee Doodle Dandy.

"The Naked Cowboy isn't
really
naked. I saw him once in Times Square." Maria shook her head, clearly disappointed. "I tell you, there's no truth in advertising anymore."

The instant she'd met her, Meredith decided she liked Maria. Maria was one of the trio of business partners at Gift Baskets to Die For, along with Meredith's cousin, Rebecca Hamilton, and another woman named Candace Woodrow.

A buxom Italian brunette, Maria wore a bright red dress and medium heels that set off her fabulous legs and made virtually every man in a thirty-foot radius stop and stare. The complete opposite to Meredith's long, straight and uninspired blond hair and dark blue eyes, all about as exciting as a Honda in a lot full of Ferraris.

Brash, outspoken and unafraid of color in her clothes, Maria was everything Meredith was not. Most of all, Maria was a perfect friend for what Meredith wanted to accomplish while she was staying in the city: a major overhaul of her life and her self.

"I think it's great that you're doing this for us," Maria said, shouting a little to be heard as they made their way through the crowds. "Dropping everything to come and help Rebecca while she's on bed rest. We were desperate for the extra help."

Desperate was something Meredith understood. When Rebecca had called yesterday morning to ask if Meredith could help out while Rebecca was home working on a healthy pregnancy, Meredith couldn't say yes fast enough. Undoubtedly, her blue-ribbon past at the Indiana State Fair and familial loyalty made her the first choice for helping them out of a jam.

Meredith circumvented a businessman with a lethal briefcase that kept swinging into her knees. "When Rebecca called, it took me about a half second to give my notice at Petey's Pizza Parlor, hang up my uniform for good, pack my bags and hop on the first plane out of Indiana."

"Oh
yeah
. I'd have
crawled
to Boston from Indiana to finally find a life that involved more than cows and corn." She glanced back over her shoulder at Bongo Boy. "I just didn't expect to have it thrust in my face, percussion complement included."

"Hey, get used to the unusual. That's part of what this city is all about."

Bongo Boy's native pounding was silenced when she and Maria stepped onto the subway car and the doors swooshed shut behind them.

Crowds shoved their way through the jam-packed Blue Line conveyance. Meredith thought of the hundreds—maybe thousands—of hands that had touched those silver poles today. She wasn't so sure she wanted to hold one, not without some gloves and antibacterial gel.

"But they're all full." Besides, who knew what had sat in those seats? She was glad she was wearing long pants. Didn't want anything ... foreign crawling up her legs.

"Not for long." Maria turned and flashed a flirty smile at two men with bright yellow construction hats, sitting side by side on the long plastic benches. A second later, the two men rose and gave up their seats.

"I thought men didn't do that kind of thing anymore. Chivalry is dead and all that," Meredith said after they sat down.

"You just have to know how to work with men, Meredith, and they'll treat you right." Maria crossed one leg over the other. Above them, the two men watched her bare legs move with undisguised appreciation. "And remember to use the top view to your advantage."

"It helps that you
have
a top. I'm a little barren up there." Meredith glanced down at her 34Bs, looking flat beneath her jacket and white turtleneck, and sighed.

"Different strokes for different folks." Maria winked. "I hope Bongo Boy didn't give you a bad impression of Boston."

"Not at all. Calvin Klein should snatch him up, though."

Maria laughed. "Now that's an ad I'd like to see when I open up my
Cosmo
."

Meredith clutched her purse in her lap, holding it tight to her chest. For the third time since she'd landed in Boston—and the tenth time since she'd left her apartment that morning—her cell phone vibrated against the inside of her bag. She peeked inside, glanced at the missed call list and let out a sigh.

She doubted even the witness protection program could hide her from her mother.

The subway car rushed around a curve, sending the bench of people against each other like a human wave. The lights flickered. Across the aisle, a burly man in a winter cap and a holey gray sweater gave Meredith a toothless smile. The scent of humans—sweat, perfume and desperation—swept through the enclosed car.

The closest she'd come to such a confined space was Elmer Tyne's annual Halloween hay ride. Most of the smells on that one came from Elmer's plodding and gassy mare, Heloise.