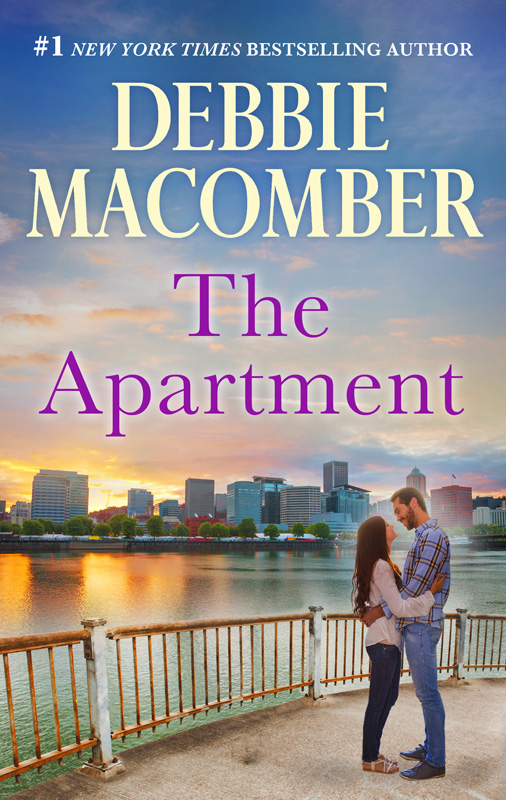 Hilary Sullivan's new apartment is the first place she's ever had on her own. She left San Francisco to live and work in Portlandâand to get away from her much-loved but overprotective mother. Hilary's twenty-four, after all! But she soon discovers that the apartment comes with an unexpected roommateâSean Cochran, a good-looking pilot who's just left the army and shows up at the place he thinks
he's
rented!

The Shop on Blossom Street

Back on Blossom Street

The Twenty-First Wish: A novella

A Turn in the Road

Bride on the Loose

Because of the Baby

From This Day Forward Books

Can This Be Christmas?

There's Something About Christmas

F
reedom. Hilary Wadsworth savored the sweetest of nectars. She was becoming fanciful, she decided, giddy with exhilaration.

“Frankly, my dear, I don't give a damn,” she shouted into the wind as she traveled across the Golden Gate Bridge, laughing without reason. The top was down on her red convertible, her hair was whipping across her face, and she wasn't the least bit concerned what the wild breeze was doing to her hair, her skin, her eyes and every other concern her mother had listed.

Louise Wadsworth, her devoted, sweet mother, had been shocked when Hilary had purchased her first car. It was unsafe, a death trap. The damning rays of the sun would destroy her peaches-and-cream complexion. People would stare at her. The list seemed endless. Hilary had listened with the patience of Job, then promptly explained she'd accepted a position with the Portland Symphony and packed her bags.

She was on her own. For the first time in her twenty-three years she was out of her mother's clutches. For once, there wouldn't be someone looking over her shoulder, commenting on everything she said and did. For once, Hilary could see who she wanted, when she wanted, without censure or disapproval. She could wear white shoes after Labor Day and black ones after Easter. No longer would she be constrained by convention and her mother's outlandish, outdated rules.

Hilary had her own apartment, her own job, and neither was connected to her domineering mother.

By the time Hilary arrived in Portland, Oregon, a day later, she experienced the first twinge of conscience. Her mother meant well. Her concerns had been prompted by a deep, bonding love.

Hilary hesitated as she unloaded the car, knowing Louise was waiting to hear from her, but she refused to give in easily. Louise Wadsworth would make a nuisance of herself if Hilary permitted it.

She hesitated. It wasn't as though she could completely ignore her own mother from here on out. Feeling a little foolish that such a small decision should be so difficult, she carted the last of the bags into the duplex and reached for the telephone.

“I've arrived safe and sound,” she announced into the receiver.

“Oh, Hilary, darling, I was so worried about you. Did Mr. and Mrs. Greerâ”

“Mother, I've already explained that the Greers will be gone for six weeks.” Apparently her mother assumed the owner of the duplex would be babysitting her.

“Mother, please, I'm completely and totally on my own.”

“Why couldn't you have found employment closer to home? Is that so much to ask?”

“Motherâ¦” Hilary expelled a small, but not discourteous sigh. “I don't mean to hurt you, but it's time I left home. It's better for us both.” Portland was perfect. Just far enough from San Francisco to prevent her mother from popping in unexpectedly and smothering her with gifts and advice. But close enough to plan occasional visits.

“It's just that I'm going to miss you so much.” Resignation echoed in the elder Wadsworth's voice. “You'll call home often, won't you?”

“Of courseâ¦” Hilary found herself agreeing without thinking. “Once a week.”

Louise's hesitation made her disappointment obvious. Hilary was certain her mother expected her to phone at least once a day. “Iâ¦love you, Hilary.”

They spoke for a few minutes longer before Hilary ended the call. She stood in the middle of her new kitchen and breathed in the magical feeling of independence. It was all she could do not to spread her arms out at her sides, whirl around and break into the chorus from “The Sound of Music.”

Everything had fallen into place for her like marching tin soldiers. After several fruitless months of waiting for a flute position with the San Francisco Symphony Orchestra, Hilary had heard of an opening in Portland. It seemed like a lark to apply, but encouraged by friends and her own growing sense of discontent, she'd flown north for the audition. From the first, her mother had a list of objections which Hilary ignored.

The tryout had gone exceptionally well. Hilary had played a selection from Mozart's Concerto in G Major in the first round with other flutists. Later she'd been called back and asked to perform several sections of Debussy's
Prelude to the Afternoon of a Faun.
After what seemed like an interminable wait, she'd been offered the position.

With the help of the orchestra director, Hilary was able to find part-time employment at a music store to supplement the meager income she'd collect from the symphony. Although she received an adequate income from a trust account, she felt it was important to live entirely on what she earned herself. It was a matter of pride. A traitâshe hated to admit thisâthat she'd learned from her mother. One that had been drilled into her since birth.

By the time she arrived back in San Francisco, Hilary had already made arrangements for the interest on her trust fund to be reinvested. She would burn her bridges behind her when she moved. The only way to travel was forward. Her goal, her purpose, was to become totally independent of her family, to support herself.

Being accepted with the Portland Symphony had been the first step in this bid for freedom. If she was going to be completely on her own, then she would need to make her own decisions. Within a few hours of accepting the job, she rented a small two-bedroom apartment. The owner, a retired couple, lived in one half of the duplex and rented out the second half.

Hilary had expected a full-fledged battle with her mother over the impending move. She'd gotten one, which had ended with her mother in tears and Hilary more determined than ever to move away. Her mother was suffocating her. Louise was ruling Hilary's life, and if Hilary didn't leave soon, she was convinced she was going to shrivel up and die.

It wouldn't have been so bad if her father were still alive. Hilary had been thirteen when her wonderful, fun-loving father had been killed in a car crash. The freak accident had sent Hilary and her mother's comfortable world into chaos.

Her mother had never been the same and neither had Hilary. Louise seemed to live in constant fear that something would happen to Hilary, too. For years, Hilary had tolerated her mother's protectiveness. She'd always been a quiet, unassuming daughter. The good daughter. Introspective, intelligent and talented. It had taken her years to come up with enough courage to break free. She was free nowâand the air had never smelled sweeter.

It took several hours to unpack. The apartment was ideal, and she loved it more now than when she'd first seen it. She took the larger bedroom as her own, grateful for the second room, which she intended to set up for practice.

As third-chair flutist she'd need to rehearse for two to five hours a day. Not that she begrudged the time. Music was the one true love of her life. Her means of escape.

Hilary had dated over the years, but had never been involved in a serious relationship. Unless she counted William, which she refused to do. There was only herself to blame for the lack of romantic interests in her life. Hilary didn't understand men. She'd lived so long without one that she felt awkward and ill at ease with them.

She was attractive enough, she supposed, both slender and delicate. She'd inherited her father's dark good looks, his coloring and her mother's beautiful gray-blue eyes. In the last few months she'd turned down several dates because she strongly suspected her mother had arranged them. If and when she found a man, she preferred to do so on her own.

Although Hilary was exhausted by the time she finished unpacking, she cooked herself dinner, a small spinach quiche which she had with a glass of white wine and fresh slices of pear.

Then she lingered for a full forty minutes in a tub of hot water while her radio sounded the strains of Rimsky-Korsakov's
Scheherazade.
This was heaven, she decided.

She'd best relax now, since the following day would be exceptionally full. In the morning she started her job at the music shop and later that afternoon she was scheduled to meet with the full symphony for practice.

If she anticipated trouble sleeping, Hilary was wrong. Her eyes drifted shut the moment her head hit the pillow, and dreams weren't far behind. She was about to begin the grandest adventure of her life.

The Unfinished Garden by Barbara Claypole White
Crave by Melissa Darnell
The Warrior's Wife by Denise Domning
Colton's Folly (Native American contemporary romance) by Simons, Renee
The Angel in My Arms: A Regency Rogues Novel by Stefanie Sloane
Ladyfish by Andrea Bramhall
United State of Love by Sue Fortin
Night Calls the Raven (Book 2 of The Master of the Tane) by Rath, Thomas
The Vampire Keeper by Sabrina Street
Foresight by McBride, EJ