The Apocalypse and Satan's Glory Hole! (1) 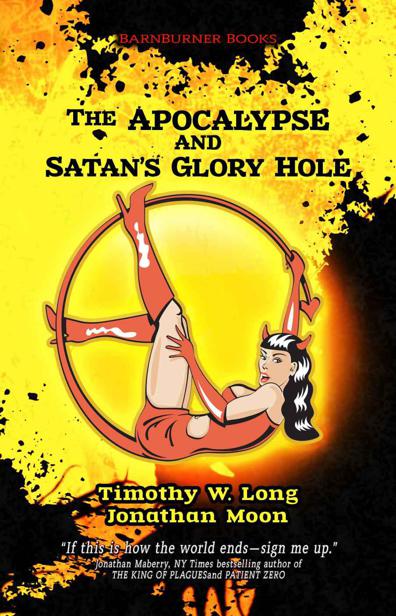 “A deranged and absurd balls-to-the-wall
romp
through a deliciously fractured universe. It reads like Douglas Adams on magic mushrooms. If this is
how the world ends—sign me up.”

“Disgusting, offensive, irreverent, and profane, and all kinds of wrong.
Jonathan Moon and Timothy W. Long are going to hell for sure.”

“Bizarro with bite.
Long and Moon are the Lennon and McCartney of apoc-horror.”

"As imaginative and engrossing as it is just fucking weird.
The Apocalypse and Satan’s Glory Hole violated my mind in the best way."

-- David Dunwoody, author of EMPIRE'S END and UNBOUND & OTHER TALES

“It's so off the wall, it's on the floor. And the floor is littered with all kinds of congealing viscera and humor so black it would make Mandingo burn you in the eye with a cigar out of jealousy.”

-- Jason Wuchenich, author of DINNER BELL FOR THE DREAM WORMS

“It's so much more than a good read, or a great read, or an excellent read! This is one over the top, hilarious,
disturbing,
poop filled, vomit inducing, bloodletting, sweat pouring, heart racing, psychologically damaging book.”

Published by arrangement with the authors.

“
The Apocalypse and Satan’s Glory Hole
”

Without limiting the rights under copyright reserved above, no part of this publication may be reproduced, stored, or introduced into a retrieval system, or transmitted in any form, or by any means (electronic, mechanical, photocopying, recording, or otherwise) without the prior written permission of both the copyright owner and “Library of the Living Dead Press,” except in the case of brief quotations embodied in critical articles and reviews.

This book is a work of fiction. People, places, events, and situations are the product of the authors’ imagination. Any resemblance to actual persons, living, dead or undead, or historical events, is purely
fucking coincidental
.

THE NEW REBELS OF FICTION
An Introduction
by William Pauley III

My first encounter with bizarro fiction was nearly ten years ago. At the time I was a very jaded reader, everything I would pick up would bore me, so when I first found bizarro, It felt like I had found a hidden door in a room that I had spent my entire life inside of. But that feeling quickly left me.

Bizarro seemed to be a style of fiction that was written specifically for my tastes. I’ve always been drawn to weird fiction, strange plots, and unique characters, and bizarro promised to have it all and more.  For at least a year, I tried to get into bizarro, but every book I read felt flat, rushed, and, to be perfectly honest, half-assed. I gave it up and returned swimming through that great big ocean of books out there.  That is until about three years ago.

Over the years, bizarro changed, a lot… and for the better. New authors had hold of the reigns, and most of them had the same idea of what bizarro should be that I had had. I decided to dip my toes in the bizarro pool once again, this time trying out books by authors Andersen Prunty, Jordan Krall, and Gina Ranalli. Holy shit. There it was. Those were the types of books I was looking for nearly ten years ago – full, well-developed, and perfectly paced stories about interesting characters in wild situations. Bizarro quickly became a way of life for me. In the last three years, over half the books I’ve read have been bizarro books.

But I’m not going to sit here and lie to you, bizarro is still about 50/50 – for every good bizarro book, you have at least one bad one. But that’s how it is in any genre of fiction. There is something in bizarro fiction for everyone, so I encourage you, avid reader, to not give up if one or two books let you down. Bizarro is more than a
genre,
it’s
all
genres – horror, sci-fi, romance, comedy, et cetera. It’s cult fiction.

There is something beautiful about this genre, this literary movement, that I’m sure most other bizarro authors probably recognize as well – Bizarro will be big, and it will be big very soon.
We are all standing hand-in-hand on the shoreline waiting for the wave to come crashing down on us all. Some of us will swim, some of us will sink, and a few of us will be eaten alive. It’s coming. There is no escaping it. I actually feel a little sad that this moment is soon to be our past. There is a brother/sisterhood in bizarro fiction that is unlike anything I’ve ever witnessed before. I’m sure success will tear a lot of us apart, some of us it already has.  But right now, in this moment, we are rock stars. We are what Hunter Thompson was in the 70s, what the splatter and cyberpunks were in the 80s. We are the new rebels of fiction. Our day is coming soon.

If you picked up this book,
The Apocalypse and Satan’s Glory Hole
by Timothy W. Long and Jonathan Moon, and it is your first exposure to bizarro fiction, then you did well my friend. This book is not only highly entertaining and hilarious, but it also serves as a great introduction to the world of bizarro. If you enjoy this style of fiction, then I would suggest reading Cartlon Mellick’s SUNSET WITH A BEARD, Steve Lowe’s MUSCLE MEMORY, or even my books DOOM MAGNETIC!
and
THE BROTHERS CRUNK, as they all are very bizarre, but easily accessible works.

You’ll like this one a whole hell of a lot, that I am sure. And the best thing is, there are two more in the series coming out very soon. That ought to juice your brain for the time being.

HE is everything. He is Brilliance and Beauty.
Glory and Power.
White Hair and Chicken Pot Pies.

He is God. Billions of humans weep for him. Pray to him. Kill in his name.

Omnipresence is exhausting. And fattening.

He frowns. Somewhere a crippled child trips and falls.

He feels the knock before it thunders around him. It ruffles the clouds that drift through the all-encompassing brightness. He feels his angel’s impatience. He hates impatience. So now he is irritable. So now he has to eat. A chicken pot pie sounds delicious. The smell of processed chicken chunks, rehydrated peas and carrots, and flakey golden crust overwhelms his godly senses. His worry is over humankind and their impending Apocalypse, but it washes away in a wave of chicken gravy.

The end is upon the world, and his angels are impatient. He knows Gabriel is knocking. He knows his angels are thirsting for battle. He is thirsty for gravy. No one has to die for gravy. They have waited and waited while the dark one’s plans grew bolder.
That bastard child.
He could find him with a glance and burn him to a cinder with a thought.

A knock at his heavenly door sounds again. He knows chicken pot pies can’t satisfy the masses the way they calm his tumultuous spirit.

"Humans,” he scoffs to himself in a voice that radiates and thunders.

He created the universe, and now his creations annoy him. Pester him. Blame him.

Not all his creations, just humans.

Why did he model his angels after humans? Beelzebub modeled most of his demons from animals and nightmares. Angels were modeled solely from humans. Foolish mistakes. He’d do better next time.

He hiccups. A tidal wave erupts, killing all six thousand, four hundred and eighty-two villagers living in its path.

Now can be next time.

“Gabe,” he shouts a split second before the large angel pounds on the door again, “calm down, my child.”