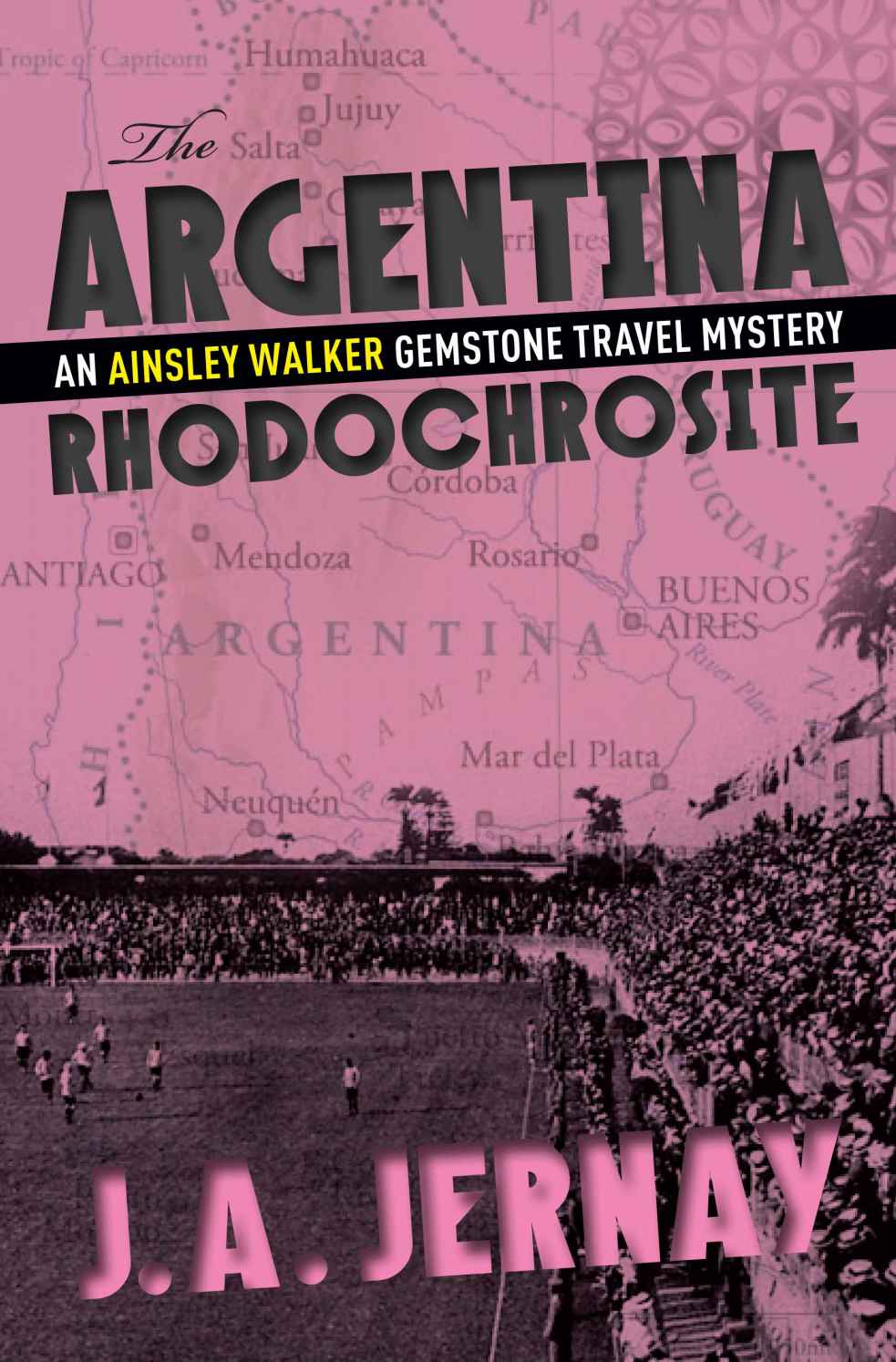 For fans of Nora Roberts and Janet Evanovich…

A famously tempermental soccer star has just suffered a terrible loss: Someone has stolen his favorite necklace.

No ordinary piece of jewelry, this rhodochrosite had belonged to his birth mother, a woman he has never met. She had ‘disappeared’ during the famous Argentine dirty war of the nineteen-seventies.

This superstar really wants it back. And he refuses to play soccer again until someone finds it.

It’s shaping up to be a national tragedy, until the arrival of…

Fresh off her amethyst adventure, Ainsley immediately embarks on a journey into the brash heart of Argentinian
futból
culture.

Running from nightclubs in historic mansions to seedy tango parlors…

…from impoverished shantytowns to the grand landscape of Patagonia…

…Ainsley discovers glamour, danger, excitement, and the dark secrets of a country’s hidden past.

…who explored North and South America for nearly twelve months…

…who was a finalist in a prestigious short story contest sponsored by the estate of F. Scott Fitzgerald…

…comes a travel adventure that will change the way you see your life.

Read what others are saying about the
Ainsley Walker Gemstone Travel Mystery
series:

“Well-paced and skillfully told, with an outstanding sense of place, an enjoyable main character, and entertaining supporting cast…
The Uruguay Amethyst
swept me off my feet.”

“
The Uruguay Amethyst
is a delightful book – it will enchant you with exotic places and interesting characters.”

“I recommend
The American Turquoise
to anyone… it is definitely worth the money.”

“Vivid and exciting…
The Argentina Rhodochrosite
made me feel like I had just watched a great Travel Channel episode.”

“The writing is tight, I just love the main character… For anyone who has ever hoped for a whole new life, this is sheer fun… ”

This book is licensed for your personal enjoyment only. This is a work of fiction. All characters and events in this book are fictional, and any resemblance to any characters, living or dead, is coincidental. This book, or parts thereof, may not be reproduced in any form whatsoever without permission.

Approximately 82,000 words.
Sixth in the series.

“Soccer is a long series of frustrations leading up to near certain heartbreeak. It rewards neurotic creativity. Many of the greatest players have been marginally insane. They respond to unfolding situations in unpredictable ways.

It’s also a game that teaches you that life is unfair. Superior performance does not often translate into victory. It reflects a tragic view of the universe.”

Ainsley Walker was stirring cream into
her coffee when she noticed the businessman making a kissyface at her.

At first, she hadn’t even been sure that she was the intended target. She’d turned around to see which unfortunate soul was the lucky recipient of this stranger’s love.

But there was nobody behind her. Ainsley herself was the mark.

She was in the cafeteria aboard the Buquebus, a large, modern hydrofoil with comfortable seating for five hundred, though there weren’t even a fraction that many on this weekday morning.

They had just left the country of Uruguay. Their destination lay three hours across the wide brown waters of the Rio de la Plata estuary.

Buenos Aires. The capital of Argentina.

The night before, her Uruguayan friend Sofia had warned her about Argentine men, about their masculinity, their forwardness, their presumptuousness. Ainsley had believed her, but she hadn’t expected the come-ons to start quite so quickly. The hydrofoil wasn’t even ten minutes out of the port.

Ainsley placed a lid onto her coffee and walked back to her seat. She could feel the businessman’s eyes burning a hole in the back of her pants. In her seat, she hazarded a glance at him.

Bad move. He had been waiting for eye contact. Now he was coming over.

After all, she had zero knowledge of what lay in store in the new country, beyond the fact that a driver would be picking her up at the terminal when she arrived. And that her new employer was apparently a famous person. Other than Evita, the scandalous first lady who had died fifty years ago, Ainsley didn’t really know any Argentine celebrities.

In the meantime, she’d have to hoist up her armor to fend off this suitor. Of course she’d chosen a seat in a row that ended against the window. There was no escape. She’d sealed her own doom.

Ainsley looked at the pack of cigarettes in her purse. She’d picked up this habit again this year after her husband, a man she only referred to as the Legal Weasel, had left her. A smoke would really help the anxiety right now, but the Buquebus didn’t allow it.

The lecherous businessman swung himself into her row, choosing a nearby seat. Ainsley began to study her passport. It had suddenly become an incredibly fascinating document.

“Do you have Spanish?” the businessman asked in Spanish.

“I think that you do,” he said, “so allow me to tell you something. Uruguay has a serious problem at immigration.”

Ainsley’s heart skipped a beat. She thought of all the misunderstandings that had occurred on her last gemstone adventure, the murder of José Ignacio Tabarez, her charcoal drawing splashed across the media, the last week she spent hiding inside Sofia’s apartment. The moment at immigration counter, just before the official had stamped the passport and waved her through, ranked as one of the most suspenseful of her life.

She decided to bite. “What do you mean?” she said.

The businessman became deadly serious. “Because they let a woman as beautiful as you leave the country.” His eyes carried the look of a true romantic.

Then his eyes glanced at her figure. “Right now it feels like a small miracle that you walk upon this earth.”

“It’s a miracle that I’ve allowed to you stay in that seat,” she said.

“Of course you are hostile,” he said. “It’s natural. Like the cactus grows the needles to protect its sweet core.”

“Maybe you’re right, but I have the wallet of a businessman. Come have a coffee with me.”

“Only if you like it poured onto your head.”

He sighed. “You are such a piece of beef. I wish I was an egg, so that I could lay down alongside you on a plate.”

Ainsley had to laugh at that one. Her suitor took the opening and reached out to touch her hand. She knocked it away. “Take yourself somewhere else,” she said, “I’m not interested.”

The businessman shrugged. “Okay,” he said.

He stood up and walked away. Ainsley grudgingly admired his confidence.

She twisted around in her seat to verify that he had indeed left. Then she settled back again and stared out the window, out into the grayness and fog of the open river. She couldn’t see water, land, or anything else.

There was a similar fog in her head.

She felt someone sit down next to her. It was the businessman.

Ainsley sighed out loud. “Wasn’t I clear? You don’t interest me.”

“This is no longer a romantic conversation,” he said.

“I would like to give you a piece of advice.”

“Yes. I was trying to tell you that you are a beautiful woman.”

“Don’t you think it is better to appreciate the compliment than to become angry?”

“You were defensive. You still are.”

He cut her off. “Stop, please. I come to you with humble appreciation of your natural gifts.”

“That’s not how I interpreted it.”

The businessman leaned forward. “But that’s how the game is played. And I didn’t invent the game. I’m only a player. We men are all players.”

The businessman let the comment sink in. Then he patted Ainsley’s knee.

“Welcome to Argentina,” he said.