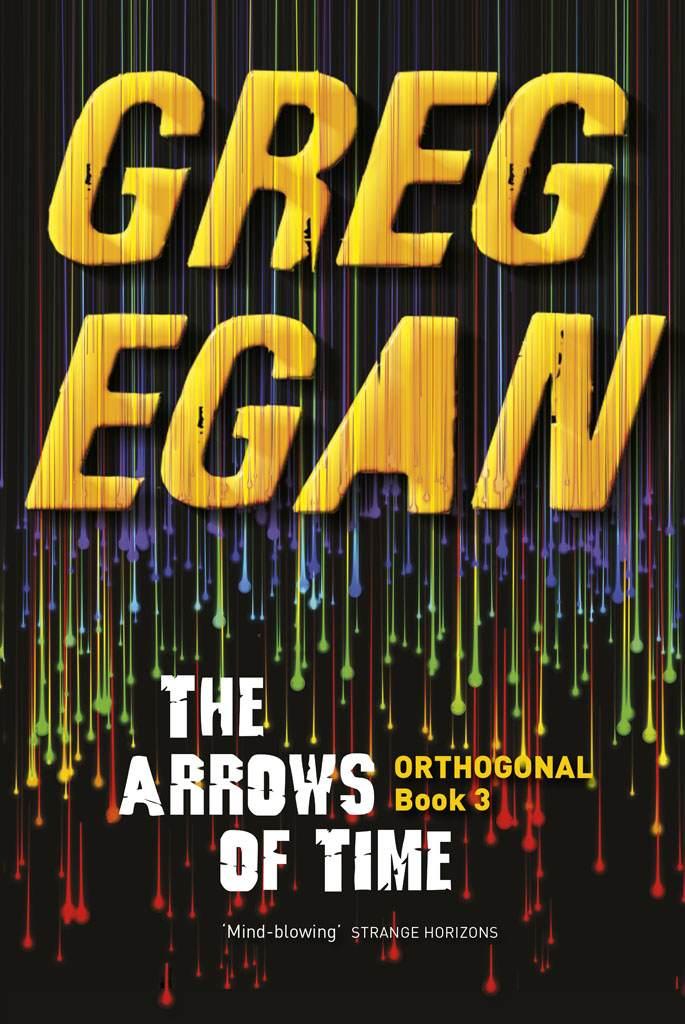 THE ARROWS OF TIME

The Arrows of Time
is the third volume of a trilogy set in a universe with laws of physics that are very different from our own. The protagonists belong to a species
whose biology, history, politics and technology – as revealed in the previous books – bear crucially on everything that follows. Accordingly, anyone approaching this volume is strongly
advised to read the preceding volumes first.

Book Three: The Arrows of Time

Also by Greg Egan from Gollancz

From her hilltop post, Valeria swept the telescope’s field of view methodically across the barren plain. The grey rock showed few features in the starlight, but so long
as she didn’t rush the task and left no gaps in her search, the kind of change she was looking for would be hard to miss.

She knew she was done when she’d made a full circle around the scope’s mount, bringing her feet back to a patch of rough ground that she could recognise by texture alone. Done and
ready to begin again.

Two bells into her shift, Valeria could feel her concentration faltering, but whenever she was tempted to abandon the mind-numbing routine she thought of the incident outside Red Towers. The
watcher there had seen a speck of light in the distance, small but growing steadily brighter. His team had reached the fire within a chime or two, and by drawing out its heat into three truckloads
of calmstone sand they’d succeeded in extinguishing it. The Hurtler that struck must have been microscopic, the point of ignition shallow, the field of flame relatively small – and some
scoffers had gone so far as to insist that there must have been similar strikes before, unobserved and untreated, that had come to nothing. But Valeria was sure that between the spot fires that
would fizzle out on their own and the kind of unstoppable conflagration that would simply vaporise everyone in sight, there was room for the watchers to make a difference. If a planet-killer
struck, it struck, but it wasn’t futile for people to try their best to fend off disaster for as long as possible.

The clock beside her rang out the last bell before dawn. Valeria gave herself a break, rolling her neck and taking in the view untrammelled by the scope’s restrictions. At the foot of the
hill the response team, her co among them, were napping in their sand trucks. Gemma had risen now, bright enough to hide most of the stars, but seven Hurtlers shone in the grey half-light: seven
streaks of colour, scattered but parallel, each one displaying perfect mirror-symmetry across its dark centre. These ghostly spikes were lengthening slowly, their violet tips just perceptibly in
motion, proof that they hadn’t even been near misses. If a planet-killer was on its way, there’d be no elegant pyrotechnic warning.

But nor would the opposite fate come with portents: if a real solution to the Hurtlers was imminent, the moment of salvation would pass without distinction. If such a feat was possible at all
then it was due to be achieved any day now, but there would be no signal from the travellers on the
Peerless
, no manifestation in the sky, no evidence of any kind.

Still, Valeria took the Hurtlers themselves as proof that the travellers’ first goal was attainable: one object really could possess an infinite velocity relative to another. The history
of each Hurtler was orthogonal to her own: the tiny rock’s eons of ancient darkness and its fiery passage through the thin gas between the planets all came and went for her in an instant,
with nothing but the time lag for the light to reach her prolonging the spectacle. If the
Peerless
really had been accelerating steadily for the past year, its engines firing without
mishap, its relationship to her would soon be the same as the Hurtlers’. Having entered that state, the travellers could maintain their course for as long as they needed, and whether the need
was measured in generations or in eras, from her point of view they would live out their lives in the same blink of her eye, regardless.

Valeria stepped away from the telescope and followed the lines of the Hurtlers to their notional vanishing point. Watching from Zeugma, she’d seen the blaze of flaming sunstone as the
mountain sped away in exactly this direction. She held up her thumb, blotting out the point in the sky where the
Peerless
had been heading – blotting out a line that stretched away
from her for an immeasurable distance. At the moment of orthogonality, that line would contain the entire history of the travellers from the day they shut off the engines to the day they had reason
to return.

In that instant, Yalda would struggle to give the whole endeavour the best foundations she could; in that instant, her time would come and she’d divide or die. In that instant, generations
would follow her who had never seen the home world, and knew they never would. But they’d strive to gain the knowledge that their distant cousins needed, because they’d understand that
it was the only way their own descendants could thrive. And in that instant, the journey, however long it had continued, would have to reach some kind of turning point. Hard-won triumph or abject
failure, the same moment would encompass it all.

Valeria kept her arm stretched out to the sky, humming softly as she mourned the woman who’d helped raise her. But Yalda would leave behind a powerful legacy. Among her successors in that
cloistered mountain, free to spend their lives in unhurried rumination, someone would find a way to spare the world from the Hurtlers.

Valeria was done with asking when. With nothing in the sky to prove her right or wrong, she was free to name the moment when the story of those generations finally unfurled, and the fate of the
planet was settled in the blink of an eye, behind her thumb.

Everything that happens, she decided, happens now.

‘Let the ancestors burn!’ Pio declaimed. ‘Why should we risk our children’s lives to save those barbarians? We need to stop talking about “the
home world” and start looking for ways to make a home for ourselves, right where we are.’

Agata was shocked. She turned to her mother and whispered, ‘Did you know he was planning to go this far?’

‘It’s a debate,’ Cira replied calmly. ‘The speakers should put both sides as strongly as possible; that’s the whole point.’

In the meeting room’s near-weightlessness the audience was spread out in three dimensions, and the hubbub evoked by her brother’s opening statement came at Agata from all directions.
It sounded very much as if the people around her had taken Pio’s words to be more than a rhetorical flourish – and, alarmingly, she could hear a few chirps of approval mixed in with the
murmurs of disquiet.

Pio waited a few more pauses for the crowd to settle before he continued. ‘People talk about estimating the risks and making some kind of trade-off. People talk about weighing the
gross-to-the-fourth living on the home world against our own numbers: less than a gross squared. People do their best to convince us that it would be an abominable act of selfishness and treason to
contemplate sacrificing so many lives for the sake of so few. But to sacrifice
ourselves
in some misguided attempt to rescue the ancestors would benefit no one. It would simply be the end
of the species.’

This bleak conclusion relied on at least two false premises, but Agata restrained herself from offering a running commentary. Pio’s official opponent would soon have a chance to rebut him
in front of the whole audience; all Agata could do was irritate her mother and a few hapless bystanders.

‘So what’s the alternative?’ Pio asked. ‘We have the means to go on living in this mountain for at least a dozen more generations – and in that time, surely, we can
find a way to make the orthogonal worlds our home.’

An amused voice interjected loudly, ‘How?’

‘I can’t answer that,’ Pio admitted. ‘Perhaps a physicist will find a way to transform our positive luxagens into negative ones, letting us walk safely on the Object
before we move on to a larger orthogonal world. Perhaps a biologist will find a way for us to sculpt orthogonal matter into a new generation of children, who bear our traits without being shed
directly from our own flesh.’ Agata’s neighbours in the crowd were reacting with equal parts hilarity and incredulity now. ‘Did the ancestors know that we’d learn to make an
Eternal Flame?’ Pio persisted. ‘Of course not! They merely trusted that, with time and dedication, we’d solve the fuel problem one way or another. We need to respect our
descendants’ abilities to deal with a problem of their own.’

The debate timer rang. Pio flipped the lever to silence and restarted it, then moved back along the guide rope, allowing his opponent to take centre stage.

‘Who knows what our descendants will achieve?’ Lila began. ‘I’m not going to try to refute Pio’s speculations. But it does seem clear to me that any attempt to
migrate into orthogonal matter would be perilous – and beyond the danger to the actual pioneers aspiring to set foot on the Object, everyone on the
Peerless
would be hostage to the
need to complete the process in a limited time. Over the generations, as their resources dwindled, they’d be forced to keep wondering whether they needed to cut their losses and try to head
home after all. But the longer they put it off, the longer that return journey would be, and eventually any misjudgement of the time they had left would be fatal.

‘Why should we subject our descendants to that kind of torture? We can turn the
Peerless
around right now, confident that it will support us long enough to complete the
trip.’

Lila brought an image onto her chest; the room’s camera picked it up and displayed it on the giant screen behind her. ‘This is the plan,’ she said. ‘This was always the
plan, from the day Eusebio broached it with Yalda.’ The sight was enough for Agata to feel a latent impression of the same familiar curve, ready to rise up on her own skin. This was the map
of her life’s purpose; she’d understood that since the day she’d first seen it.