Read The Artifact of Foex Online

The Artifact of Foex 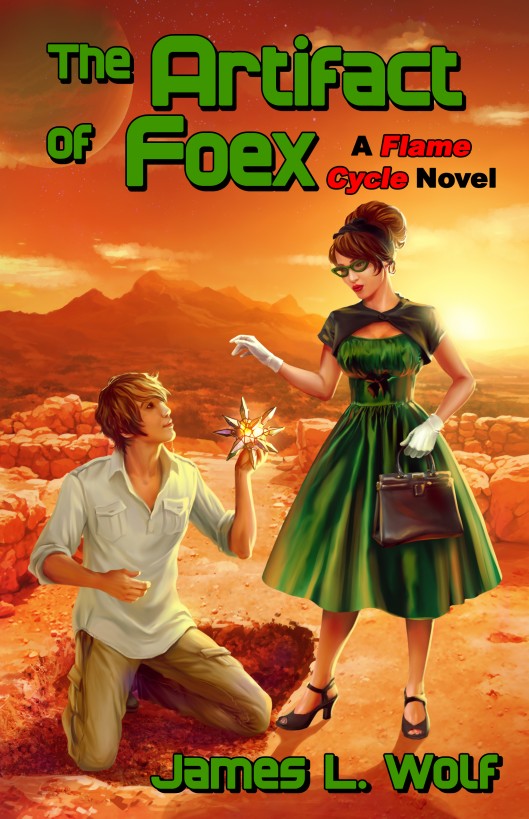 When Chet, a graduate student of archaeology
,
is invited to show a gorgeous woman named Journey around their
summer dig site, he has no idea what he’s in for. For one thing
Journey isn’t a woman: she’s Flame, one of the reviled, shape
shifting, gender-fluctuating people of Uos. Then Journey uncovers a
deadly secret in the dust. Chet must run to keep up with spies,
murder, long-lost magic, and a romantic dream embodied by a
332-year-old man who holds the key to absolute power on the world
of Uos. (Other, M/F, M/M)

The Artifact of Foex

THE ARTIFACT OF FOEX

All rights reserved. No part of this work may be
used or reproduced in any manner whatsoever without permission from
the publisher, except as allowed by fair use. For more information,
contact [email protected]

All the characters, locations and events
herein are fictional. While elements of existing locations or
historical characters or events may be used fictitiously, any
resemblance to actual people, places or events is coincidental.

1.
Lusting After the
Past

6.
Taking One for the Team

11.
Getting Away from It
All

15.
The Trouble With
Hitchhiking

30.
Lusting for the
Present

Chapter 1
Lusting After the Past

Chet concentrated on pit 214, his miniature
mattock grimy from sweat and dust. He was glad that the equipment
was the same shape—if not size and composition—of the ancient
farming tool. He loved the way the mattock’s form and name
connected him with the past.

Chet was less enamored with their current
work site. It was dusty, both hot and humid, under direct sunlight
of the poppy-colored sky. Also, it was far too close to a rumbling
construction zone. Every single one of Professor Veyaon Tibbet’s
graduate students had accompanied him to the Lucid Mud dig site,
and Chet was no exception. He coughed and lifted the kerchief
covering his mouth to spit, aiming away from where he was digging.
The last thing he wanted was actual mud in his dirt.

“Oh, brother. Take a look at that piece of
work,” Von Sampson murmured from pit 216. From his tone, Chet knew
that his feckless colleague was not referring to a find. Chet
followed his gaze and nearly dropped the miniature mattock.

Professor Tibbets, wearing his usual tweed
suit—completely inappropriate for the Wetshul summer—was leading a
lady onto the dig site. The woman was serene and elegant, her lines
flawless. She was of the flaxen race—a citrus-yellow skin tone—with
the usual red hair and almond-shaped eyes. Flaxen was the most
prolific race on the Eicha continent, including Chet himself and
most of his peers.

Pantheon, she was gorgeous.

Chet immediately decided that she’d be at
home in any historical time period. His mind’s eye dressed her:
perhaps she would shine in the garb of ancient Tache, with its
elaborate skirts and wigs. Maybe she would be splendid in Crimson
Era leathers and fur. His groin tightened at the thought. Despite
his meandering fancy, she was plainly a modern-day woman. She wore
white gloves, and her purse matched her high-heeled shoes. Her
dress was ample with crinoline petticoats peeking out just below
her knees. A real lady. Her hair was cropped in the most modern of
fashions, and her cat’s eye glasses were tinted in respect to the
sun.

Of course, Von Sampson wasn’t interested in
her clothing. “Nice stems. And those
tits
.”

“Quite the bone structure,” Wiggler said from
pit 239. He should know, being the resident osteology expert.

“Put your eyes back in your head, boys,” Rory
growled from pit 224. “You especially, Chet Baikson.”

The graduate students around him were making
noises and comments more like primary-school students, all along
the lines of, “
Oooo
, you’re bustedddd.”

Chet dropped his gaze back to the dust. It
wasn’t as if he and Rory were still dating, not since their
amicable break up last week, but he still valued her opinion.
Dating Rory had made Chet feel very uncomfortable, and he’d been
relieved after breaking up with her. It wasn’t that he didn’t like
her—he did!—but he’d felt so self-conscious. Rory’s status as a
Shadow Dancer made him cringe. Then again, every one of Professor
Tibbet’s graduate students was a god affiliate... save himself.

Few people on Uos doubted the existence of
the Pantheon of gods. There was no question of belief or faith when
it came to powerful, long-lived beings that radiated energy like a
nuclear-hot zone. Few in numbers, they tended to stay on the God
Plain. Ancient humans had thought it an ethereal place, but these
days rational people considered it a different dimension. Close to
the physical reality of Uos but not of it. Distance was a good
thing. Personally, Chet hated the idea of beings that could crush
you with a look; he wanted no truck with the Pantheon. Nor their
political system, family squabbles, incest, back stabbing or
dynastic power struggles. Nothing.

Well... maybe a few of the gods were okay.
But the one Chet really liked was dead, alas.

“Hey, want to get some water at the
pavilion?” Rory said as she wandered over to his pit, wiping her
grimy face with a handkerchief. It didn’t make much difference.
Rory was of the bistre race, a brown skin tone so dark she almost
looked purple.

As usual, Chet was awed by her beauty. He
always wondered what a girl like her had ever seen in a guy like
him. “Maybe later.”

“Suit yourself.” She looked like she wanted
to say more, her mouth tight as she walked away.

This was ridiculous. He wanted her so much,
and by all signs she liked him right back, but he always felt
crushed by her intense superiority, both racial and affiliate wise.
Rory was something by birth that Chet had chosen never to become: a
god affiliate. It was a symbiotic relationship. The god granted
their chosen humans powers, and thus gained numerous allies on Uos.
Freakish, terrifying, dangerous, powerful, and politically savvy,
it could be said that affiliates ruled Uos like monarchical regents
of ancient times. Not quite god, not quite human. Chet knew that
Shadow Dancers—the type of god affiliate Rory was—were often
portrayed as devious spies who could become invisible, but he’d
never seen her fade from view. Never asked her to demonstrate.

Maybe he was a coward at heart.

It was a good theory. Rory was out of his
league in every way possible, and even if she’d never acknowledged
it out loud, it was true. Everyone knew it. Chet had nothing to
offer her; he was just a guy. The worst part was that she hadn’t
deserved his self doubts or fear cast upon her. Strict friendship
was less fraught.

Chet grinned, instantly heartened by the
professor’s choice and confidence. “Looks like I’m nominated,” he
said in Von Sampson’s direction as he vaulted out of the pit. That
was the nice thing about Professor Tibbets. He chose Chet for
duties regardless of the fact that he was unaffiliated, not like
some
professors.

Upon closer inspection, the mystery woman was
just as breathtaking. Chet felt his groin rise to half mast as he
drew close. Hopefully, no one would notice.

Professor Tibbets was speaking to her
sotto voce.
“Perhaps male would have been the better
choice to avoid attention.”

“Now that I’m here, I think you’re right. I
haven’t been to Wetshul in over a century. Didn’t realize it was
still this bad,” she said, her perfectly formed lips frowning.

A century?
Chet blinked. He arrived
beside them and smiled expectantly.

Professor Tibbets turned to him. “Chet, this
is Journey. She is my honored guest and a historical expert with
practical experience in the time periods we’ve been studying. I’m
putting you in charge of Journey’s needs while she’s with us. For
now, please give her an overview of the site.”

Chet caught a whiff of her scent as she
turned his way. To his horror, his groin tightened further, not
quite fully erect but close to it. He could have sworn she wasn’t
wearing perfume. Not the sort that most women wore, anyway. He
coughed—his throat dusty—and made a sweeping gesture of the
dig.

“This site is the first of its kind this
century and certainly the first in Eastern Eicha. It’s very
exciting. The only reason we haven't gotten much press yet is we
just started. You know Professor Tibbets—have you read his papers?
Do you know of his theories about this kind of dirt? It’s what they
used to call lucid mud...”

“Of course I know what it is. Lucid mud in
liquid form used to churn throughout Uos, rising and falling
through the inner layers of the planet. It’s a preservative.
Sometimes people used lucid mud as a dump but not often. In the old
days, we always believed it churned everything down to the center
of the Abyss, where the mother of gods herself resided. No one
wanted to throw garbage onto Aerora. We were a superstitious lot,
eh?”