Read The Ascent of Man Online

The Ascent of Man 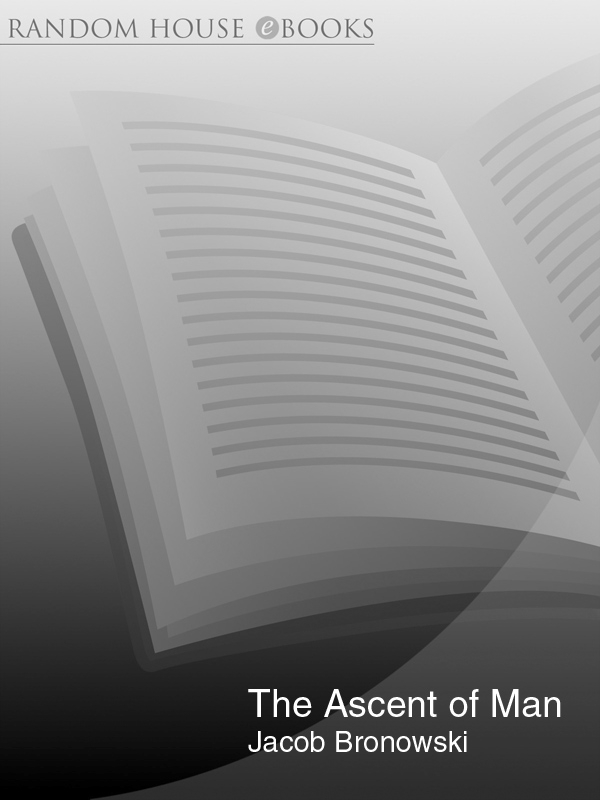 CHAPTER ONE: LOWER THAN THE ANGELS

CHAPTER TWO: THE HARVEST OF THE SEASONS

CHAPTER THREE: THE GRAIN IN THE STONE

CHAPTER FIVE: THE MUSIC OF THE SPHERES

CHAPTER EIGHT: THE DRIVE FOR POWER

CHAPTER NINE: THE LADDER OF CREATION

Dr Jacob Bronowksi’s
The Ascent of Man
traces the development of human society through our understanding of science.

First published in 1973 to accompany the groundbreaking BBC television series, it is considered one of the first works of ‘popular science’, illuminating the historical and social context of scientific development for a generation of readers. In his highly accessible
style, Dr Bronowski discusses human invention from the flint tool to geometry, agriculture to genetics, and from alchemy to the theory of relativity, showing how they all are expressions of our ability to understand and control nature.

Dr Bronowski’s magnificent thirteen-part BBC television series
The Ascent of Man
traced our rise – both as a species and as moulders of our own environment and future. The book of the programmes covers the history of science, but of science in the broadest terms. Invention from the flint tool to geometry, from the arch to the theory of relativity, are shown to be expressions of
man’s specific ability to understand nature, to control it, not to be controlled by it. Dr Bronowski’s rare grasp not only of science, but also of its historical and social context, gave him great advantages as an historian of ideas. The book gives us a new perspective not just on science, but on civilisation.

Dr Jacob Bronowski, who was born in Poland in 1908, died in 1974. His family had settled
in Britain and he was educated at Cambridge University.

He was distinguished not only as a scientist but also as the author of books and broadcasts on the arts. Many viewers will remember his science programmes on television: he also wrote radio plays, including one which won the Italia Prize.

Dr Bronowski, who was an Honorary Fellow of Jesus College, Cambridge, had lived and worked in America
since 1964, as a Senior Fellow and Director of the Council for Biology in Human Affairs at the Salk Institute for Biological Studies, San Diego, California.

Other Books by J. Bronowski

with
The Abacus and The Rose
:

The Philosophy of Contemporary Science
1969 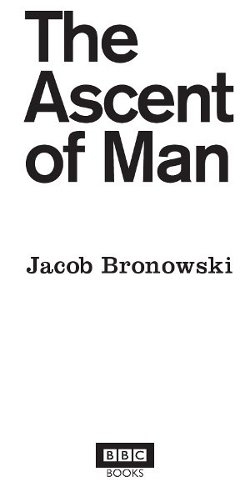 ‘Last renaissance man’ has become a cliché, but we forgive a cliché on the rare occasion when it is true. Certainly it is hard to think of a better candidate for the accolade than Jacob Bronowski. You’ll find other scientists who can parade a deep parallel knowledge of the arts, or – in one actual case – combine eminence in science with pre-eminence in Chinese history.
But who more than Bronowski weaves a deep knowledge of history, art, cultural anthropology, literature and philosophy into one seamless cloth with his science? And does it lightly, effortlessly, never sinking to pretension? Bronowski uses the English language – not his first language, which makes it all the more remarkable – as a painter uses his brush, with mastery all the way from broad canvas
to exquisite miniature.

Inspired by the
Mona Lisa
, here is what he has to say about arguably the first and greatest renaissance man, whose drawing of the baby in the womb introduced the television version of
The Ascent of Man
:

Man is unique not because he does science, and he is unique not because he does art, but because science and art equally are expressions of his marvellous plasticity of
mind. And the
Mona Lisa
is a very good example, because after all what did Leonardo do for much of his life? He drew anatomical pictures, such as the baby in the womb in the Royal Collection at Windsor. And the brain and the baby is exactly where the plasticity of human behaviour begins.

How deftly Bronowski segues from Leonardo’s drawing to the Taung baby: type-specimen of our ancestral genus
Australopithecus
, victim – as we now know, though Bronowski didn’t when he performed his mathematical analysis on the tiny skull – of a giant eagle two million years ago.

There’s a quotable aphorism on every page of this book, something to treasure, something to stick on your door for all to see, an epitaph, perhaps, for the gravestone of a great scientist. ‘Knowledge … is an unending adventure
at the edge of uncertainty.’ Uplifting? Yes. Inspiring? Without doubt. But read it in context and it is shocking. The grave turns out to belong to an entire tradition of European scholarship, destroyed by Hitler and his allies almost overnight:

Europe was no longer hospitable to the imagination – and not just the scientific imagination. A whole conception of culture was in retreat: the conception
that human knowledge is personal and responsible, an unending adventure at the edge of uncertainty. Silence fell, as after the trial of Galileo. The great men went out into a threatened world. Max Born. Erwin Schrödinger. Albert Einstein. Sigmund Freud. Thomas Mann. Bertolt Brecht. Arturo Toscanini. Bruno Walter. Marc Chagall.

Words so powerful don’t need a raised voice or ostentatious tears.
Bronowski’s words gained impact from his calm, humane, understated tones, with the engagingly rolled Rs as he looked straight into the camera, spectacles flashing like beacons in the dark.

That was a rare dark passage in a book that is mostly filled with light, and genuinely uplifting. You can hear Bronowski’s distinctive voice through this book, and you can see his expressive hand chopping down
to cut through complexity and make a point. He stands before a great sculpture, Henry Moore’s
The Knife Edge
, to tell us,

The hand is the cutting edge of the mind. Civilisation is not a collection of finished artefacts, it is the elaboration of processes. In the end, the march of man is the refinement of the hand in action. The most powerful drive in the ascent of man is his pleasure in his own
skill. He loves to do what he does well and, having done it well, he loves to do it better. You see it in his science. You see it in the magnificence with which he carves and builds, the loving care, the gaiety, the effrontery. The monuments are supposed to commemorate kings and religions, heroes, dogmas, but in the end the man they commemorate is the builder.

Bronowski was a rationalist and
an iconoclast. He was not content to bask in the achievements of science but sought to provoke, to pique, to needle.

That is the essence of science: ask an impertinent question, and you are on the way to a pertinent answer.

That applies not just to science but to all learning, epitomised, for Bronowski by one of the world’s oldest and greatest universities – in Germany as it happens:

The University
is a Mecca to which students come with something less than perfect faith. It is important that students bring a certain ragamuffin, barefoot irreverence to their studies; they are not here to worship what is known but to question it.

Bronowski treated the magical speculations of primitive man with sympathy and understanding, but in the end

… magic is only a word, not an answer. In itself, magic
is a word which explains nothing.

There is magic – the right kind of magic – in science. There is poetry too, and magical poetry on every page of this book. Science is the poetry of reality. If he didn’t say that, it is the kind of thing he might have said, articulate polymath and gentle sage, whose wisdom and intelligence symbolises all that is best in the ascent of man.

The first outline of
The Ascent of Man
was written in July 1969 and the last foot of film was shot in December 1972. An undertaking as large as this, though wonderfully exhilarating, is not entered lightly. It demands an unflagging intellectual and physical vigour, a total immersion, which I had to be sure that I could sustain with pleasure; for instance, I had to put off researches
that I had already begun; and I ought to explain what moved me to do so.

There has been a deep change in the temper of science in the last twenty years: the focus of attention has shifted from the physical to the life sciences. As a result, science is drawn more and more to the study of individuality. But the interested spectator is hardly aware yet how far-reaching the effect is in changing
the image of man that science moulds. As a mathematician trained in physics, I too would have been unaware, had not a series of lucky chances taken me into the life sciences in middle age. I owe a debt for the good fortune that carried me into two seminal fields of science in one lifetime; and though I do not know to whom the debt is due, I conceived
The Ascent of Man
in gratitude to repay it.

The invitation to me from the British Broadcasting Corporation was to present the development of science in a series of television programmes to match those of Lord Clark on
Civilisation
. Television is an admirable medium for exposition in several ways: powerful and immediate to the eye, able to take the spectator bodily into the places and processes that are described, and conversational enough
to make him conscious that what he witnesses are not events but the actions of people. The last of these merits is to my mind the most cogent, and it weighed most with me in agreeing to cast a personal biography of ideas in the form of television essays. The point is that knowledge in general and science in particular does not consist of abstract but of manmade ideas, all the way from its beginnings
to its modern and idiosyncratic models. Therefore the underlying concepts that unlock nature must be shown to arise early and in the simplest cultures of man from his basic and specific faculties. And the development of science which joins them in more and more complex conjunctions must be seen to be equally human: discoveries are made by men, not merely by minds, so that they are alive and charged
with individuality. If television is not used to make these thoughts concrete, it is wasted.

The unravelling of ideas is, in any case, an intimate and personal endeavour, and here we come to the common ground between television and the printed book. Unlike a lecture or a cinema show, television is not directed to crowds. It is addressed to two or three people in a room, as a conversation face
to face – a one-sided conversation for the most part, as the book is, but homely and Socratic nevertheless. To me, absorbed in the philosophic undercurrents of knowledge, this is the most attractive gift of television, by which it may yet become as persuasive an intellectual force as the book.

The printed book has one added freedom beyond this: it is not remorselessly bound to the forward direction
of time, as any spoken discourse is. The reader can do what the viewer and the listener cannot, which is to pause and reflect, turn the pages back and the argument over, compare one fact with another and, in general, appreciate the detail of evidence without being distracted by it. I have taken advantage of this more leisurely march of mind whenever I could, in putting on paper now what was
first said on
the television screen. What was said had required a great volume of research, which turned up many unexpected links and oddities, and it would have been sad not to capture some of that richness in this book. Indeed, I should have liked to do more, and to interleave the text in detail with the source material and quotations on which it rests. But that would have turned the book into
a work for students instead of the general reader.