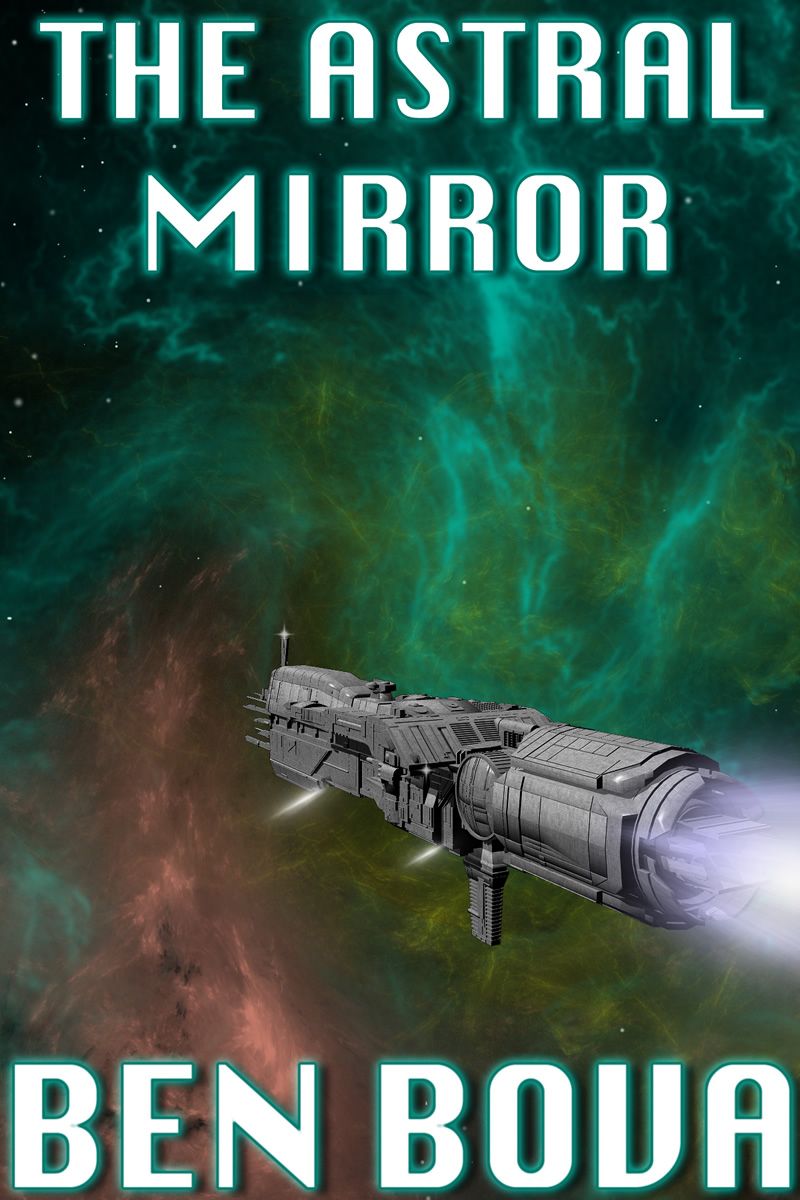 “What you are about to read deals with the stars, the wide galactic future that lies at our fingertips today... both factual articles and fictional stories. In a world where robots are causing human unemployment, spaceflight is so commonplace the news media regard it as dull, and science fiction has become a mainstay of the bestseller lists... nonfiction has become just as exciting as the fiction.

“So here are a dozen and a half views of the world, past present and future, as seen through the
Astral Mirror....”

Other books by Ben Bova:

As on a Darkling Plain

The Winds of Altair

The Story of Light

The Craft of Writing Science Fiction that Sells

This ebook is licensed for your personal enjoyment only. This ebook may not be re-sold or given away to other people. If you would like to share this book with another person, please purchase an additional copy for each person. If you're reading this book and did not purchase it, or it was not purchased for your use only, then please purchase your own copy. Thank you for respecting the hard work of this author.

The Secret Life of Henry K.

To Be or Not

It's Right Over Your Nose

Astral:
adv. [from Latin
astrum,
star] 1. Of or relating to the stars; starry; 2. consisting of, or belonging to, or being a supersensible substance supposed to be next above the tangible world in refinement; 3. visionary, unwordly, exalted...

If art is a mirror held up to life, then the stories and essays in this collection are an
astral
mirror. What you are about to read certainly deals with the stars, the wide galactic future that lies at our fingertips today. Since these works of fiction and fact deal with the future, they are astral in the second sense, as well. They are beyond the tangible, everyday world of the here-and-now. And I fondly hope that you will find them astral in the third sense, too: visionary, unworldly—or rather, otherworldly—and farseeing enough to leave you feeling exalted.

This book is somewhat different from most science fiction collections. It contains both factual articles and fictional stories. In a world where robots are causing human unemployment, spaceflight is so commonplace that the news media regard it as dull, and science fiction has become a mainstay of the best seller lists, the nonfiction has become just as exciting as the fiction.

So here are a dozen and a half views of the world, past, present, and future, as seen through the Astral Mirror.

Ad astra per aspera.
The first piece we hold up before the Astral Mirror deals quite literally with the stars—how to get to them. I had this fantasy about putting together a panel of distinguished experts to brainstorm the problem of traveling to the stars. A few years after this essay appeared in print, an enterprising student at Boston University actually created the television broadcast I had dreamed of and asked me to be its anchor man. Among the “stars” of the panel was Professor Philip Morrison of the Massachusetts Institute of Technology, the brightest and most human man I have ever met. If—no, when we get to the stars, it will be because scientist/teachers such as he have paved the way.

Imagine a television talk show, a panel discussion, where the moderator or “anchor man” is a science fiction writer.

He’s sitting at a large round table of gleaming dark wood with touches of shining metal around the edges. Sitting at the other chairs around the table are experts from every field of science. Farther away from the table are the cameras and lights and technicians.

“In the old days—say, fifty years ago—science fiction writers had a much easier job than we have now. For example, when Edgar Rice Burroughs wanted a strange and marvelous setting in his stories, he simply placed his characters on Mars or Venus or even in the center of the Earth. Nobody could tell him he was wrong.”

“I thought Burroughs wrote about Tarzan,” says the astronomer, two seats down from the writer.

Nodding, the writer answers, “He did. But he also wrote terrific adventure stories that were set on Mars and Venus and in Pellucidar, the land
inside
the Earth.”

“That’s just the trouble,” the writer says. “Today I can’t get away with such stuff. People know that the Earth isn’t hollow. They know that Venus is a red-hot desert underneath its clouds, where the ground temperature’s hot enough to melt aluminum and the air is an unbreathable soup...”

“And Mars,” the writer continues, with something like a tear gleaming in the corner of one eye, “good old Mars—we’ve
photographed
it. No canals, no cities, no Martian princesses. Nothing but craters and desert.”

“Well, what’s your problem?” the physicist asks sharply. She’s sitting across the table from the writer. “I should think you’d be glad to get all this accurate information. Now you can write stories that have real, accurate backgrounds.”

“Yes, that’s true,” the writer admits. “And sometimes I do write such stories. But where do I turn to when I want an absolutely wild and wonderful planet? I can’t tell my readers that Mars has cities of glass surrounded by fields of purple trees. I can’t tell them that Venus is populated by sea serpents that sing underwater...”

“Why on Earth would you want to tell anyone such nonsense?” the medical doctor asks, looking startled.

“Because sometimes I just want to write a story that goes way beyond the everyday world. Sometimes I need a strange and wonderful landscape for a story. And there aren’t any... not in our solar system.”

The entire panel of experts falls silent. Finally the writer says, “So where can a science fiction writer turn if he wants to create a bizarre world with strange-looking alien creatures? He’s got to go outside our solar system. He’s got to set his story on a planet that circles a different star.

“And that’s the purpose of our discussion, ladies and gentlemen. You’re going to tell me how to get to the stars.”

“Impossible!” the physicist snaps, with a shake of her head. “You just can’t get to the stars. Not really. A rocket would have to reach a burnout speed of nearly 58,000 kilometers per hour to escape from the Sun’s gravitational influence.”

“We could improve the rockets,” the writer says.

“Please let me finish,” says the physicist. “Even if the rocket could keep going at its top speed of 58,000 kilometers per hour—which it won’t, once the rocket engines shut down—it would take 80,000 years to reach Alpha Centauri, the next nearest star. Actually, figuring that the rocket will slow down and coast almost all the way, it will take more like a million years for a rocket to get to Alpha Centauri.”

The astronomer adds, “And that’s the star that’s closest to our solar system. It’s only 4.3 light-years away. Even if you could travel at the speed of light—which is 300,000 kilometers
per second—
it would take 4.3 years to get there.”

“A light-year is a measure of distance, isn’t it?” the science fiction writer asks.

“Precisely,” answers the astronomer. “Light travels at 300,000 kilometers per second. There are about 31.5 million seconds in a year. Therefore light can travel nearly nine and a half trillion kilometers in a year. This distance is used as a unit of measurement in astronomy and called a light-year.”

“And the nearest star is 4.3 light-years away,” adds the physicist, somewhat smugly.

“Which means it would take you 4.3 years to get there even if you traveled at the speed of light,” the astronomer says.

Undaunted, the science fiction writer asks, “Well, what about hyperspace? I can send my starship into super-lightspeed overdrive and leave this continuum for a different dimensional coordinate system. In hyperspace I can travel as fast as I want to. I can get my hero to Alderbaran VI just in time to win the battle... or just late enough to allow the heroine to have been abducted by the tarantula people...”

The physicist throws her hands up and nearly screams. “Gibberish! Absolute nonsense. You just invented hyperspace as a convenience.”

“Not me,” the writer counters. “The mathematicians did. And anyway, since you can’t prove that I’m wrong, the idea is still useful. Science fiction can always use an idea that hasn’t been proved wrong. Right?”

Muttering something about the conservation of energy, the physicist sinks back into her chair.

“She’s got good reason to be upset,” the astronomer says. “This hyperspace business is merely a mathematical trick. It’s got nothing to do with the real world. Nothing in the universe has been observed to travel faster than light. Chances are that nothing ever will. No... if you want to go to Alpha Centauri, it’s going to take you at least 4.3 years. The speed of light is a barrier that apparently can’t be broken through.”

The science fiction writer frowns. “The ‘light barrier’ sounds a lot like the ‘sound barrier’ that the aircraft engineers broke through about forty years ago.”

All the scientists groan in protest. The engineer, waving his pocket calculator as he speaks, explains that everyone knew that the speed of sound was not a fundamental barrier.

“Bullets, meteors, shock waves... there were plenty of things that we knew traveled faster than sound. The problem was to build an airplane that could do it without breaking up because of the stresses it flew into right around Mach 1—sonic speed.”

“But
nothing
goes faster than light,” the physicist resumes. “Nothing in the whole universe.”

“Isn’t there something called tachyons?” the writer asks, his voice somewhat subdued. “Don’t they go faster than light?”

“Tachyons are completely theoretical,” the physicist explains. “A few physicists have been playing with the idea that there are particles somewhere in the universe that go faster than light, and they called these particles tachyons. But as far as we know, they don’t exist. In fact, according to the theories, if tachyons did exist we could never see them or use them... so it doesn’t really matter whether they exist or not!”

“This is beginning to sound awfully gloomy.” The writer leans back in his chair, sulking.

“You asked us and we’re telling you,” the physicist insists. “Look. At the speed of light, the basic relationships between matter and energy begin to do strange things. For example, we’ve built powerful particle accelerators. In them we can speed up the motion of an electron until it’s going at better than 95 percent of the speed of light. At those speeds, when we add more energy to the electron, it doesn’t go any faster—it gets heavier! Its mass grows. No matter how much energy we pump into the electron, it never reaches light speed. The energy changes into mass.” The writer looks ready to slide under the table and forget the whole affair.

But from a quiet part of the table the mathematician says, in a thin but clear voice, “Although the physicist and engineer can’t tell you how to build a ship that goes as fast as light, I can show you what would happen if such a ship existed.”

The Pig Goes to Hog Heaven by Joseph Caldwell
Covenant by Crawford, Dean
Damsels in Distress by Joan Hess
The Daring Escape of Beatrice and Peabody by Kimberly Newton Fusco
Tread Softly by Wendy Perriam
Bet in the Dark by Higginson, Rachel
Death in Her Eyes (A Mac Everett Mystery Book 1) by Nick Vellis
Pqueño, grande by John Crowley
The Shards by Gary Alan Wassner
The Island of Last Truth by Flavia Company, Laura McGloughlin