The Atomic Weight of Love 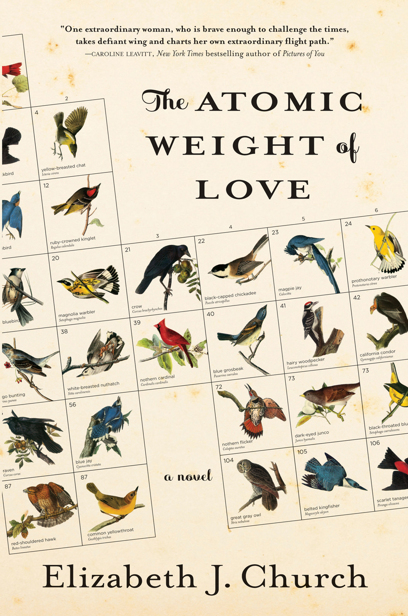 The Atomic Weight of Love

For Meridian Wallace and many other smart, driven women of the 1940s being ambitious meant being an outlier. Ever since she was a young girl, Meridian has been obsessed with birds, and she s determined to get her PhD, become an ornithologist, and make her mother s sacrifices to send her to college pay off. But she didn t expect to fall in love with her brilliant physics professor, Alden Whetstone. When he s recruited to Los Alamos, New Mexico, to take part in a mysterious wartime project, she reluctantly defers her own plans and joins him."

An Amazon Best Book of May 2016:
The Atomic Weight of Love
sounded like a quiet book to me, but the process of transformation from caterpillar to butterfly is a quiet thing, too, and that’s what this story reminds me of. It’s a fascinating account of Meridian Wallace, a science-minded woman who falls in love with a brilliant man working on big things—in this case, the atomic bomb. She puts her dreams on hold in service to his, sure that it’s only temporary and in these years meets other women who have done the same. Suddenly, it seems as if she has just faded into the background of her own life. Then the catalyst--a young man, both hippie and Vietnam veteran, who introduces her to many things, freedoms born of the era, and there is indecision. Ultimately Meridian reclaims herself, takes her identities over all those years and patches them together into a new and meaningful life. Woven throughout are interesting facts about human-like bird behavior and historical anecdotes, so while Meridian’s story--a reflection of the changing role of women between the 1940’s and 1970’s--is the centerpiece, there are many other treasures along the way.
--Seira Wilson

"Church’s debut will likely strike a chord, especially with women who find that not much has changed in our patriarchal society since Meri’s time, and that Meri’s story might well be their own."
—Poornima Apte for *Booklist
*

“Church's debut novel explores the relationship between sacrifice and love...Church's commentary on the American nuclear family, particularly the expectations placed on women, showcases iterations ranging from doting housewives and mothers who are content in their roles to the rebellious. Each sentence drives the plot further, exploring love's limits and its spoils. But it's Church's exploration of Meridian's role in her relationships that is the most gracefully executed feat of the novel. Meridian's voice is poignant, a mixture of poetry and observation...An elegant glimpse into the evolution of love and womanhood.”
—*Kirkus Reviews
*

“Oh, what a incandescent debut! From the atomic bomb tests at Los Alamos to the Vietnam War protests to the fascinating lives of crows, Church follows one extraordinary woman, who is brave to enough to challenge the times, take defiant wing, and chart her own extraordinary flight path. So engrossing, I couldn’t wait to read another page, and so alive, I never wanted the story to end.” —
Caroline Leavitt,
New York Times
bestselling author of
Is This Tomorrow
and *Pictures of You
*

“This exquisite debut is the beautifully written story of a woman who must negotiate the tricky terrain of love, responsibility, ambition and sacrifice.  In her impeccable portrayal of a long marriage, Elizabeth Church weaves together the historical and the personal and shows the impossible choices women faced - and still face - between family and self.”
—Tara Conklin, author of *The House Girl
*

“Church hits the mark in this emotionally driven debut that spans the chapters of a long life….What does love require of us? How does one strike a balance between compromise and self-fulfillment? In her debut novel, Church writes to these issues in a style that is thoughtful and elegant.”
—*Library Journal
*

To my brother Alan A. Church,

How have all those exquisite adaptations of one part of the organisation to another part, and to the conditions of life, and of one distinct organic being to another being, been perfected?

—CHARLES DARWIN,
On the Origin of Species

Los Alamos is in a restricted airspace reservation covered by an Executive order, dated May 23, 1950. This airspace cannot be penetrated except by authority of the AEC [Atomic Energy Commission]. Historically permission has been refused except for the chartered [AEC flights of official visitors and project personnel].

—from the report of the Hearing before the Subcommittee on Communities of the Joint Committee on Atomic Energy, Congress of the United States, Eighty-Sixth Congress, First Session on Community Problems at Los Alamos, December 7, 1959

A Parliament of Owls

A Watch of Nightingales

A Party of Jays

A Tidings of Magpies

A Descent of Woodpeckers

A Charm of Hummingbirds

A Murmuration of Starlings

A Pod of Meadowlarks

A Kettle of Hawks

An Exaltation of Larks

A Deceit of Lapwings

An Unkindness of Ravens

A Murder of Crows

A Fall of Woodcocks

A Flight of Sparrows

In early January of 2011, forty-five hundred red-winged blackbirds fell dead from the Arkansas skies. A few days later, five hundred more birds plummeted to earth, and their broken bodies covered an entire quarter-mile stretch of the highway near Baton Rouge, Louisiana. Some thought that one bird, confused by bad weather, led the others to their deaths; others blamed pesticides. I suspect there were also those who felt God had struck the birds from the sky in some sort of apocalyptic fever. Eventually, wildlife experts determined that the birds had died of blunt force trauma. Startled by the explosion of celebratory New Year’s fireworks, the birds—who had poor night vision—flew into power lines, telephone poles, houses, mailboxes, and tree branches. Our exuberance killed them.

I’m watching the birds, still. Paying attention, observant—ever the ornithologist. Stories such as these keep me awake at night when I cannot escape the beating of my eighty-seven-year-old heart, the constancy of it, the weariness of it. I cannot say with scientific certainty how many times over these many decades it kept or deviated from its rhythm, how many times it catapulted with love or capitulated in grief. Maybe Alden could have calculated those numbers for me. Across the universes of so many academic blackboards he flung like stardust numbers and symbols, the language of mathematics and the elegant formulae of physics. He dissected unseen worlds, galaxies I could only begin to imagine. One of the scientists who created the first atomic bomb, Alden knew the weight of invisible neutrons, could predict the flight paths of escaping electrons. He could conceive of the existence of such phantasms and then release their formidable, destructive power.

But Alden never knew how to measure the weight of a sigh. He could not predict the moment when the petal of a spent rose would release and descend. Alden could not tell me when a screech owl would cry out from a darkened pine bough outside my bedroom window and insinuate itself into my dreams.

I first loved him because he taught me the flight of a bird, precisely how it happens, how it is possible. Lift. Wing structure and shape, the concepts of wing loading, drag, thrust. The perfectly allotted tasks of each differently shaped feather. The hollowness of bones to reduce weight, to overcome gravity. I was too young to realize that what I really yearned to know was
why
birds take flight—and why, sometimes, they refuse.

This is not Oppenheimer’s story. It is not that of Edward Teller or Niels Bohr, Fermi or Feynman. This is not the story of the creation of the atomic bomb, or of Los Alamos, the birthplace of the bomb. It is not even Alden’s story. Someone else has told their stories—will tell their stories. This is my story, the story of a woman who accompanied the bomb’s birth and tried to fly in its aftermath.

A Parliament of Owls

1. A solitary, nocturnal bird of prey characterized by its small beak and wide face.

2. A farsighted bird, the owl cannot clearly see anything within a few centimeters of its face.

He was a giant of a man. You had to be, to win on the battlefield. Over six foot seven inches tall. A mountain of a Scotsman.” My father held the carving knife suspended in the air over a Sunday roast chicken. “Brown, curly hair, piercing eyes that could spot treachery and deceit one hundred yards away.” He freed a drumstick. “Meridian, pass me your plate.”

I felt relieved. Sometimes Daddy purposefully denied me a piece of dark meat; he thought I should learn to make do with whatever was offered. Caught up in his Scottish lore, he must have forgotten for a moment about building my character.

“Guns are a great equalizer. You don’t have to be physically strong to shoot someone, not like close-quarter combat,” he continued. “Wallace had to be a true warrior. Still, he carried a Psalter with him, knew the psalms of David by heart, even quoted them as the English tortured and killed him.”

“Grahame, no. Stop now.” My mother forced his gaze to meet hers across the supper table.

“Why would he carry salt?” Eight years old, I was wholly enamored of my father and his stories.

“They’re facts, Jennie. Meridian shouldn’t be afraid of facts. That’s life.” My father turned to me. “A book of psalms, not salt.”

A high school history teacher with thinning brown hair and a deep cleft chin, my father loved outlandish tales of wildly self-destructive Scottish courage and the brilliant defeat of the English by Wallace during the Scottish Wars of Independence. Grahame Alan Wallace could not prove it, but he was certain we were descended from Scotland’s greatest hero, a man whose unconventional tactics let the Scots win against all odds.
Stirling Bridge
.
1297
. My father hammered those facts into me, a litany more powerful than any I ever heard in Sunday school.

“God comes in handy in a war, that’s why he carried the book of psalms,” my mother pronounced, tugging at the cuff of her sleeve. She made all of our clothes then. It was 1932, and the Great Depression was heavy upon us. To my enduring shame, I had to wear a neighbor girl’s dresses made over by my mother to fit me. My soft, fine, dark blonde hair hung lank to my chin, just the tips curling inward, as if seeking protection beneath the angle of my jaw. Omnipresent dark shadows dwelt beneath my eyes, maybe because when I could get away with it I stayed up late into the night, reading.

“Is one side in a war always right and the other wrong, is that why God picks sides?”

“This is what your conversational topics are doing to us, Grahame.” My mother held out her plate for her serving of chicken.