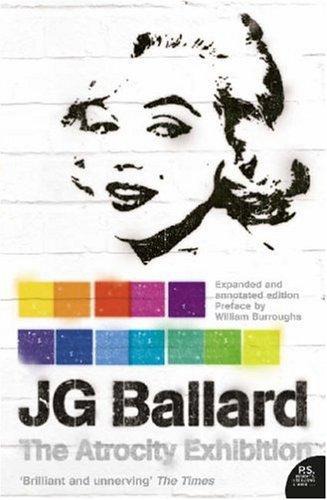 with an Preface by William Burroughs

This revised, expanded, annotated edition of
The Atrocity Exhibition
first published in a large format in Great Britain by Flamingo, 1993

The author asserts the moral right to be identified as the author of this work.

This novel is entirely a work of fiction. The names, characters and incidents portrayed in it are the work of the author’s imagination. Any resemblance to actual persons, living or dead, events or localities is entirely coincidental.

All rights reserved. No part of this publication may be reproduced, stored in a retrieval system, or transmitted, in any form or by any means, electronic, mechanical, photocopying, recording, or otherwise, without the prior permission of the publishers.

The University of Death

Notes towards a Mental Breakdown

Tolerances of the Human Face

You and Me and the Continuum

Plan for the Assassination of Jacqueline Kennedy

The Generations of America

Why I Want to Fuck Ronald Reagan

From the reviews of The Atrocity Exhibition:

Most of the film stars and political figures who appear in
The Atrocity Exhibition
are still with us, in memory if not in person - John F. Kennedy, Ronald Reagan, Marilyn Monroe and Elizabeth Taylor. Together they helped to form the culture of celebrity that played such a large role in the 1960s, when I wrote
The Atrocity Exhibition
.

Other figures, though crucially important to the decades that followed, have begun to sink below the horizon. How many of us remember Abraham Zapruder, who filmed the Kennedy assassination in Dallas? Or Sirhan Sirhan, who murdered Robert Kennedy? At the end of each chapter I have provided a few notes that identify these lesser characters and set out the general background to the book.

Readers who find themselves daunted by the unfamiliar narrative structure of
The Atrocity Exhibition
- far simpler than it seems at first glance - might try a different approach. Rather than start at the beginning of each chapter, as in a conventional novel, simply turn the pages until a paragraph catches your eye. If the ideas or images seem interesting, scan the nearby paragraphs for anything that resonates in an intriguing way. Fairly soon, I hope, the fog will clear, and the underlying narrative will reveal itself. In effect, you will be reading the book in the way it was written.

The Atrocity Exhibition
is a profound and disquieting book. The nonsexual roots of sexuality are explored with a surgeon’s precision. An auto-crash can be more sexually stimulating than a pornographic picture. (Surveys indicate that wet dreams in many cases have no overt sexual content, whereas dreams with an overt sexual content in many cases do not result in orgasm.) The book opens: ‘A disquieting feature of this annual exhibition . . . was the marked preoccupation of the paintings with the theme of world cataclysm, as if these long-incarcerated patients had sensed some seismic upheaval within the minds of their doctors and nurses.’

The line between inner and outer landscapes is breaking down. Earthquakes can result from seismic upheavals within the human mind. The whole random universe of the industrial age is breaking down into cryptic fragments: ‘In a waste lot of wrecked cars he found the burnt body of the white Pontiac, the nasal prepuce of LBJ, crashed helicopters, Eichmann in drag, a dead child . . . ’ The human body becomes landscape: ‘A hundred-foot-long panel that seemed to represent a section of sand dune . . . Looking at it more closely Doctor Nathan realized that it was an immensely magnified portion of the skin over the iliac crest . . . ’ This magnification of image to the point where it becomes unrecognizable is a keynote of
The Atrocity Exhibition
. This is what Bob Rauschenberg is doing in art - literally
blowing up
the image. Since people are made of image, this is literally an explosive book. The human image explodes into rocks and stones and trees: ‘The porous rock towers of Tenerife exposed the first spinal landscape . . . clinker-like rock towers suspended above the silent swamp. In the mirror of this swamp there are no reflections. Time makes no concessions.’

Sexual arousal results from the repetition and impact of image: ‘Each afternoon in the deserted cinema: the latent sexual content of automobile crashes . . . James Dean, Jayne Mansfield, Albert Camus . . . Many volunteers became convinced that the fatalities were still living and later used one or the other of the crash victims as a private focus of arousal during intercourse with the domestic partner.’

CHAPTER ONE
THE ATROCITY EXHIBITION

Apocalypse.
A disquieting feature of this annual exhibition - to which the patients themselves were not invited - was the marked preoccupation of the paintings with the theme of world cataclysm, as if these long-incarcerated patients had sensed some seismic upheaval within the minds of their doctors and nurses. As Catherine Austin walked around the converted gymnasium these bizarre images, with their fusion of Eniwetok and Luna Park, Freud and Elizabeth Taylor, reminded her of the slides of exposed spinal levels in Travis’s office. They hung on the enamelled walls like the codes of insoluble dreams, the keys to a nightmare in which she had begun to play a more willing and calculated role. Primly she buttoned her white coat as Dr Nathan approached, holding his gold-tipped cigarette to one nostril. ‘Ah, Dr Austin . . . What do you think of them? I see there’s War in Hell.’

Notes Towards a Mental Breakdown.
The noise from the cine-films of induced psychoses rose from the lecture theatre below Travis’s office. Keeping his back to the window behind his desk, he assembled the terminal documents he had collected with so much effort during the previous months: (1) Spectro-heliogram of the sun; (2) Front elevation of balcony units, Hilton Hotel, London; (3) Transverse section through a pre-Cambrian trilobite; (4) ‘Chronograms,’ by E. J. Marey; (5) Photograph taken at noon, August 7th, 1945, of the sand-sea, Qattara Depression, Egypt; (6) Reproduction of Max Ernst’s ‘Garden Airplane Traps’; (7) Fusing sequences for ‘Little Boy’ and ‘Fat Boy’, Hiroshima and Nagasaki A-Bombs. When he had finished Travis turned to the window. As usual, the white Pontiac had found a place in the crowded parking lot directly below him. The two occupants watched him through the tinted windshield.

Internal Landscapes.
Controlling the tremor in his left hand, Travis studied the thin-shouldered man sitting opposite him. Through the transom the light from the empty corridor shone into the darkened office. His face was partly hidden by the peak of his flying cap, but Travis recognized the bruised features of the bomber pilot whose photographs, torn from the pages of
Newsweek
and
Paris-Match
, had been strewn around the bedroom of the shabby hotel in Earls Court. His eyes stared at Travis, their focus sustained only by a continuous effort. For some reason the planes of his face failed to intersect, as if their true resolution took place in some as yet invisible dimension, or required elements other than those provided by his own character and musculature. Why had he come to the hospital, seeking out Travis among the thirty physicians? Travis had tried to speak to him, but the tall man made no reply, standing by the instrument cabinet like a tattered mannequin. His immature but at the same time aged face seemed as rigid as a plaster mask. For months Travis had seen his solitary figure, shoulders hunched inside the flying jacket, in more and more newsreels, as an extra in war films, and then as a patient in an elegant ophthalmic film on nystagmus - the series of giant geometric models, like sections of abstract landscapes, had made him uneasily aware that their long-delayed confrontation would soon take place.

The Weapons Range.
Travis stopped the car at the end of the lane. In the sunlight he could see the remains of the outer perimeter fence, and beyond this a rusting quonset and the iron-stained roofs of the bunkers. He crossed the ditch and walked towards the fence, within five minutes found an opening. A disused runway moved through the grass. Partly concealed by the sunlight, the camouflage patterns across the complex of towers and bunkers four hundred yards away revealed half-familiar contours - the model of a face, a posture, a neural interval. A unique event would take place here. Without thinking, Travis murmured, ‘Elizabeth Taylor.’ Abruptly there was a blare of sound above the trees.

Dissociation: Who Laughed at Nagasaki?
Travis ran across the broken concrete to the perimeter fence. The helicopter plunged towards him, engine roaring through the trees, its fans churning up a storm of leaves and paper. Twenty yards from the fence Travis stumbled among the coils of barbed wire. The helicopter was banking sharply, the pilot crouched over the controls. As Travis ran forward the shadows of the diving machine flickered around him like cryptic ideograms. Then the craft pulled away and flew off across the bunkers. When Travis reached the car, holding the torn knee of his trousers, he saw the young woman in the white dress walking down the lane. Her disfigured face looked back at him with indulgent eyes. Travis started to call to her, but stopped himself. Exhausted, he vomited across the roof of the car.

Serial Deaths.
During this period, as he sat in the rear seat of the Pontiac, Travis was preoccupied by his separation from the normal tokens of life he had accepted for so long. His wife, the patients at the hospital (resistance agents in the ‘world war’ he hoped to launch), his undecided affair with Catherine Austin - these became as fragmentary as the faces of Elizabeth Taylor and Sigmund Freud on the advertising billboards, as unreal as the war the film companies had restarted in Vietnam. As he moved deeper into his own psychosis, whose onset he had recognized during his year at the hospital, he welcomed this journey into a familiar land, zones of twilight.
At dawn, after driving all night, they reached the suburbs of Hell. The pale flares from the petrochemical plants illuminated the wet cobbles. No one would meet them there
. His two companions, the bomber pilot at the wheel in the faded flying suit and the beautiful young woman with radiation burns, never spoke to him. Now and then the young woman would look at him with a faint smile on her deformed mouth. Deliberately, Travis made no response, hesitant to commit himself into her hands. Who were they, these strange twins

- couriers from his own unconscious? For hours they drove through the endless suburbs of the city. The billboards multiplied around them, walling the streets with giant replicas of napalm bombings in Vietnam, the serial deaths of Elizabeth Taylor and Marilyn Monroe terraced in the landscapes of Dien Bien Phu and the Mekong Delta.

1942664419 (S) by Jennifer M. Eaton
Breaking Through (Atlanta #3) by Kemmie Michaels
Genesis by Karin Slaughter
UNSTOPPABLE (Siri's Saga Book 2) by Klide, Jessika
Before I Let You In by Jenny Blackhurst
George Pelecanos by DC Noir
Dreams of Dani by Jenna Byrnes
Tonio by Jonathan Reeder
The History Boys by Alan Bennett
Set Sail for Murder by R. T. Jordan