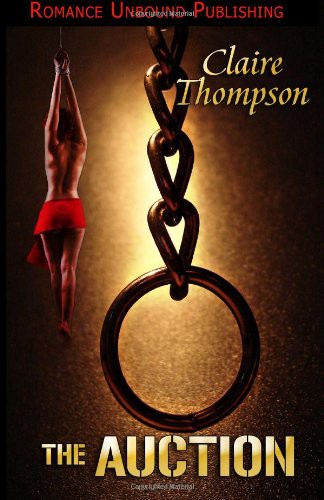 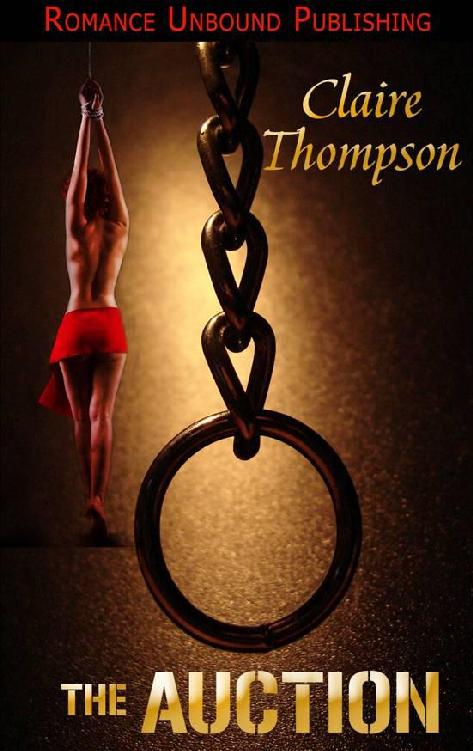 “The last man who bought me kept me chained by the wrists to a bar inside a closet when he wasn’t using me. I would fall asleep on my feet, surrounded by his clothing.” Jessica, one of Carly’s fellow slaves-in-training at the auction house, closed her eyes and sighed dramatically. “He was
so
hot, though. The time spent in the closet was
well
worth the wait, let me tell you.” Jessica leaned back in the huge hot tub, sliding down until only her head showed. The tips of her white-blond hair darkened to honey as they floated on the frothing water.

Cassandra, a redhead with breasts as round and hard as cantaloupes interjected, “Hey, at least he was good looking. The guy I had last time was at least twice my age. He must have weighed over three-hundred pounds. Even his ears were fat! The only thing tiny on that guy was his dick.”

All five women soaking in the tub laughed at this, but beneath the laughter Carly sensed the others shared her edgy excitement. Even the women like Cassandra and Jessica who had already been successfully auctioned in the past were still required to undergo the week-long slave training, though for them it was just a refresher, while for Carly the experience had been intense and rigorous. She had managed to get into the program under somewhat false pretenses, and as she listened to the women share their prior experiences, she wondered for the hundredth time that week if she was getting in over her head.

“Let’s go, girls. Free time is over.” Mistress Audrey entered the large communal bathroom where the young women had been given their first half hour of free time since they’d arrived for training seven days before. All conversation instantly ceased, as the slave girls were not permitted to speak in the presence of their trainers, except in answer to a direct question.

Mistress Audrey was dressed in her usual black Spandex tank top, a riding crop tucked into the waistband of her leggings. Despite her outfit, Mistress Audrey always reminded Carly of a queen, the tilt of her chin and the toss of her head regal and utterly commanding. At the same time, she was gracious and patient, which Carly especially appreciated, being one of the new kids on the block.

The next hour passed in a whirlwind of hair styling, makeup and last minute instructions by both Mistress Audrey and Master Franklin on auction decorum and expectations. At the stroke of eight, Master Franklin announced, “It’s time. Remember all you’ve learned. I trust you will prove yourselves worthy. Hopefully each one of you will have a new Master tonight.” If Mistress Audrey reminded Carly of a queen, Master Franklin would have been one of her knights, a guard with his sword ever at the ready, his feelings kept well in check behind a stern expression that betrayed no hint of emotion.

The slave girls were led onto the small stage, each girl taking her place on the silk cushion placed on the side stage, back straight, head bowed. As Master Franklin greeted the gentlemen sitting at tables in front of the stage, Carly tried to remember how to breathe. Butterflies were batting wildly in the cage of her stomach. She experienced a sudden, nervous urge to giggle.

Despite the relatively modest exterior of the building that housed
Erotica Auctions
, the auction room had been decorated like something out of a nineteenth century mansion, with real crystal chandeliers, Persian carpets over polished wood floors and deep wingback leather chairs. Original oil paintings of nudes reclining on silk settees or the soft moss of riverbanks hung in gilded frames on the walls, and there was a marble fireplace with a huge mirror above the mantle set in an elaborately ornate antique silver frame. The room smelled of leather, lemon oil and the lingering smoke of fine cigars.

Though she knew better, Carly dared to turn her head slightly, giving her a view of the auction room and the ten men who made up the night’s select clientele, one of whom, she both hoped and feared, would take her home that evening.

Her eyes lingered on a man in the center of the room. He had thick black hair that curled against his neck, clear gray eyes and a strong chin. He was dressed in the understated elegance of the truly wealthy—cashmere, finely spun cotton and loafers Carly guessed cost a month’s rent. He held a brandy snifter in one hand, the other resting lightly on the leather folder Carly knew contained all the pertinent details about the five women who were up for bid, including explicit photos in leather and rope, detailed descriptions of each woman’s health record and experience level in BDSM, and what she was seeking in a potential Master.

As she stared at the man, he turned as if aware of her gaze and looked directly at her. Carly knew she should look away, should look down at the ground as she had been instructed to show her submission and respect, but she couldn’t seem to tear her eyes from his face. He continued to stare at her, giving her the oddest feeling that he was looking past her face and into her secrets.

Master Franklin touched Carly’s shoulder and squeezed. She felt the warning in his fingers and, face blazing, quickly averted her gaze, focusing on the royal blue cushion beneath her knees.

The first potential slave put up for bid was Angie, a voluptuous beauty. She was naked, as all the girls were, and boasted long black hair that cascaded down her back in shiny waves. Her skin was dark and smooth, her features exotic, with almond-shaped eyes and sensual, pouting lips. She moved gracefully, without a trace of self-consciousness as she was ordered to pose in various positions that intimately revealed her many attributes.

As she moved with languorous ease, arching her back, spreading her legs, turning to show her ass to the men and bending forward to grasp her ankles, the auctioneer directed the bidding and the men called out their offers. After several minutes, the auctioneer hit his gavel against the podium, the sharp crack of wood on wood making Carly jump.

“Slave Angie is awarded to Mr. Chapin for thirty-four thousand dollars.” Master Franklin approached Angie, clipped a leash to her collar, and led her off the stage.

“Our second lovely slave girl of the evening is slave Carly,” the auctioneer announced, punctuating his words with another sharp tap of the gavel. Carly looked at Mistress Audrey, who nodded. Her heart knocking against her ribs, Carly rose unsteadily from her kneeling position, praying no one could see that her legs were shaking. She followed the trainer, trying to walk in the swaying, lilting way she had been taught by the trainers.

Carly came to a stop at center stage and turned to face her audience. Though they’d been kept naked or nearly so for most of the week, Carly felt more exposed at this moment than she ever had in her life. While she had grown increasingly comfortable with her constant nudity, now that she was standing naked and alone on the stage, it was all she could do to resist covering her body with her arms and turning away from the hungry gazes of the men staring up at her.

Yet when Mistress Audrey tapped her shoulder with the end of her riding crop, the week’s constant training kicked in and Carly sank obediently into a kneeling position on the stage floor, keeping her back straight and eyes downcast.

Another tap and Carly spread her knees to give the men a better view of her shaved pussy. She held herself still, her chin raised. She focused on the middle distance, carefully avoiding eye contact with the man with the dark hair who sat only a few feet away, brandy and cigar in hand. When she felt two taps on her shoulder she rose with as much grace as she could muster on legs that felt like rubber.

A tap to her upper arm, and Carly placed her hands behind her head, lacing her fingers together as she displayed her naked body for her potential Masters. A tap on her back and she turned, hands still behind her head, thrusting her ass out toward the men as she’d been taught. Finally she bent as Angie had, grasping her ankles, glad the men couldn’t see her face, which from the scalding heat on her cheeks she knew was beet red.

Another tap, and Carly turned slowly back toward the audience while Mistress Audrey addressed the men. “You have Carly’s detailed information in your folders, but as quick recap, she is thirty-two years old, five foot six and weighs one hundred twenty-two pounds. This is Carly’s first time with
Erotica Auctions
, but if she pleases you, we are hopeful this won’t be her last.”

Was Mistress Audrey really talking about her? Was Carly really up there on the stage waiting to be handed off to the highest bidder? How surreal this felt, displaying herself like a slave girl in Ancient Greece. “She is available for the standard one-month contract,” Mistress Audrey continued, “with renewal terms to be negotiated.”

Though Carly kept her eyes down, she felt Mistress Audrey move away and her heart, which was already pounding, leaped into her throat as the auctioneer said, “The bidding begins at twenty thousand.”

“Twenty-one,” called out a voice from a far corner of the room.

“Twenty-two,” called out another. Carly had the odd sensation that she was standing outside of her body, watching this bizarre event unfold as if it were happening to someone else. She wanted to look up, to see who was bidding, to see if the man with the gray eyes was one of the three voices that kept calling out their bids, but she didn’t dare.

“Thirty,” came the voice from the corner. In the silence that followed Carly bit her lip so hard she nearly broke the skin. The auctioneer hit the gavel. “Going once…”

There was sudden hush in the room as if everyone, Carly included, were holding their breath. Carly’s heart beat against her sternum as she stood in front of the men, feeling as if her very life hung in the balance as the auctioneer waited for another bid.

Finally she heard the strike of the gavel. “Slave Carly is awarded to Mr. Wise for fifty thousand dollars.”

As Mistress Audrey approached her, Carly couldn’t help it. She looked up, her heart lurching as she saw the handsome man with the gray eyes getting to his feet and moving toward the stage.

Adam Wise wasn’t quite sure what had compelled him to jump in with that winning bid. The slave girl he’d just purchased wasn’t even his physical type. He favored slim, small-breasted women like slave Nina, a twenty-four-year-old beauty who seemed to have a submissive streak a mile wide. He had focused on Nina’s dossier and had planned to bid on her and only her.

Yet when the five women had been led out, for some reason he was drawn to the woman kneeling to Nina’s left. He recognized her from the photos as Carly, with her unruly tumble of curly, golden brown hair and vivid blue eyes set in a heart-shaped face. She looked younger than her stated age of thirty-two, and where Nina exuded exotic sophistication, Carly looked more like the fresh faced girl next door, too puppy-dog eager for Adam’s tastes.