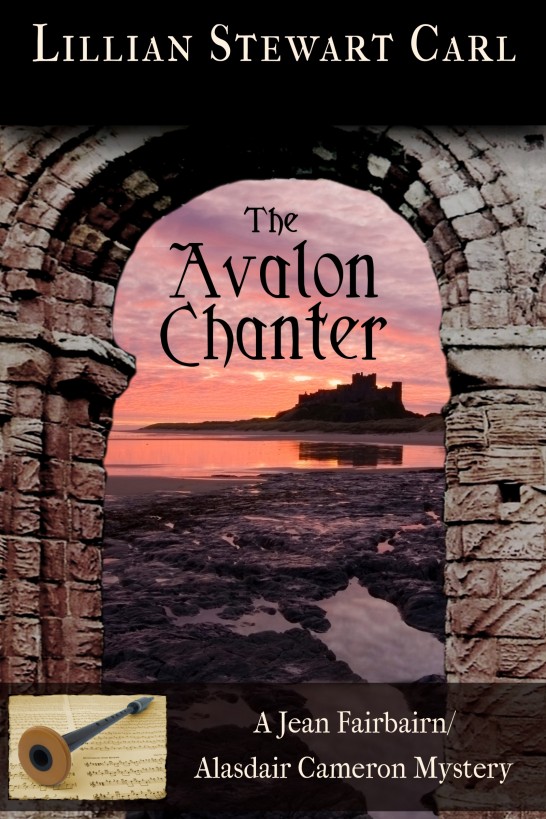 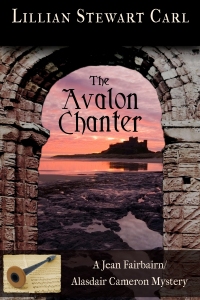 What
reviewers are saying about
The Avalon Chanter
:

Could Farnaby
Island be the Avalon of Arthurian legend? Farnaby lies off the
coast of Northumberland, near the better-known holy isle of
Lindisfarne. First Elaine Lauder and now her daughter Maggie,
inhabitants of Farnaby, have tried to prove that it is Avalon.
Maggie has announced the opening of a tomb she’s convinced will
cause a sensation. It does but not the one she had imagined . . .
full of enjoyable twists.

…
full of
fascinating Arthurian connections . . . Carl's fondness for the
mythology of the British Isles, a dash of ghost sighting, and the
region will work for armchair travel enthusiasts.

The novel is
beautifully written and whether you believe the ethereal singing of
ancient Priory nuns is real or mere wisps from the fog-shrouded sea
only enhances the brooding atmosphere of danger that pervades the
pages of this novel. The family complications and old passions are
complicated and carefully worked out to logical conclusions so that
in the end, the resolution to mystery and murder is solidly
satisfying. An excellent novel that comes strongly recommended.

This book is available in print at most
on-line retailers

For all the Scottish musicians who have
enriched my life, starting—but not ending—with Brian McNeill, John
Taylor, and Ed Miller.

“
I play with Gallowglass from time to
time.”

The Secret
Portrait
, book one of the Fairbairn/Cameron
series.

Jean Fairbairn gazed past the edge of the
map, at the gray-green hills gliding anonymously outside the car
window. “Dang! I wanted to get there by the time she opens the
grave!”

Her husband favored her with a glance from
his keen blue eyes. “Professor Lauder and her chantry chapel, eh?
What’s she on about this time?”

“
She hasn’t said. I mean, the purpose
of a press release is to tease and promote, not answer ques— What
do you mean,
this time
? Are
you thinking of that old court case?”

“
The woman was on trial for
murder.”

“
Well, yeah. Big scandal and all that,
but she was acquitted. Even an old cop like you—former cop, not
old, I mean—even a meticulous guardian of truth, justice, and the
British way like you has to cut her some slack. It happened twenty
years ago and she’s been a model citizen ever since.”

Alasdair slowed the car. His hint of a frown,
Jean estimated, commented on their location, not their
conversation.

“
As for the chantry chapel and the
mysterious tomb,” she went on, “I think I know where Lauder’s
going, considering her earlier work and who her mother is. Or was,
poor thing.
You
know how much
I love a reality–mythology smackdown.”

“
That I do,” he said with a sigh. “I’m
wishing we knew where we were going just now.” He peered over the
weathered stone wall hemming in the strip of blacktop that passed
for a road. The hills weren’t so much rolling as twitching, with
sudden screes and narrow gullies sprouting bristly shrubs, lumpy
grass, and the occasional sheep. And the ruins of farms long
gone.

Britain was one of the most thickly
populated countries in the world, and yet there were areas you’d
swear hadn’t seen a human being since Eric Bloodaxe was a pup.
“When I called Miranda I told her we were taking the scenic route,”
Jean rationalized. “Country roads, Roman and Dark Age sites,
Flodden Field and the flower of Scotland a’ wede awa’—I’ll do some
sort of ‘Legends of the Scottish Borders’ article for
Great Scot
if the chapel, grave,
thing, turns out to be a bust.”

“
Oh ye of little faith in the follies
of an archaeologist on the trail of the next big discovery. You
don’t get funding opening the grave of some nameless
peasant.”

All he replied was, “Next time we’re hiring a
car with GPS. Or bringing along a guide.”

“
I could try again with the GPS on one
of our phones, but . . .” Pulling out her handheld supplemental
brain, Jean switched it on, saw that it was still registering a
lack of contact with its own kind, and switched it off again.
“Well, we can actually see the sun today, and since it’s going down
behind us, we’re heading east. If we keep going, we’ll either meet
the main highway or tip over into the North Sea. Then we’ll know
where we are.”

Alasdair muttered something about English
roads—or perhaps about England, period.

“
We’re only a few miles into
Northumbria, a long way north of Hadrian’s Wall. It’s barely
England. You can stow the rampant lion of Scotland in the trunk of
the car. The boot of the car.”

Stopping at a crossroad, Alasdair considered
both directions, said “Right!”, and turned left.

Jean folded the map—no, not that way. She
tried again. Not that way either. “GPS,” she said, half to herself.
“Global Positioning System. How about Green Pastures Strange? That
has a Biblical sound to it.”

“
Yes, dear,” she replied. Funny how his
remark provoked an indulgent smile, not resentment. They were
settling into married bliss, a little give, a little take, a trim
of the sails here, a solid push-back there. They’d learned from
their first marriages. They were determined to have learned from
them.

Jean forced the map into a bulging rectangle,
tossed it into the back seat, and once again inspected the hills
outside the window. They were smoothing out, calming down. There
lay an inhabited farm, and beyond it, rising from the horizon, the
massive rotating blades of several wind turbines. In the tender
light of the April afternoon they looked like alien spaceships.

“
Well then. Ancroft. Civilization of a
sort.” Alasdair slowed to a decorous crawl through the photogenic
village, but not slow enough for Jean to fully appreciate the
church, part house of worship, part fortress.

“
Historical physics,” she wrote aloud.
“Two independent entities can’t occupy the same territory at the
same time. Roman, Celt, Briton, and Pict, Angle, Saxon, and Dane,
Scotsman and Englishman, sometimes fighting with, sometimes against
each other. Dark and bloody ground, the Borders, like all borders,
physical or metaphorical. Like the borderlands of perception where
ghosts walk.”

“
Yes, dear,” Alasdair said with an
indulgent smile of his own.

Between a break in the hills glinted the sea.
The road traced a tight curve, like a thread of interlace design on
the Lindisfarne Gospels, and came to a stop at the wide tarmac of
the A1. Traffic sped by, seeming almost as alien as the wind
farm.

Jean winced as Alasdair swung into a right
turn, across traffic—over a year in the UK and her instincts still
defaulted to the American side of the road. Then she widened her
eyes to watch for signs. Within moments she spotted one indicating
the village of Beal and the causeway crossing to Lindisfarne, the
Holy Island itself. Waiting cars were backed up almost to the
highway.

“
Here’s me,” said Alasdair as they
drove on by, “worried about catching the tide. If it’s low enough
for driving the causeway to Lindisfarne, it’s too low for the ferry
crossing to Farnaby Island.”

“
Oh. You can tell I was born and raised
a long way away from anything having tides. That never occurred to
me.”

“
I’m hoping a Plan B’s occurred to you.
If the ferry’s not this side of the crossing, there’s no point our
calling for it. We’ll be sleeping the night on the mainland, and
going across with Michael and Rebecca tomorrow.”

“
Dang,” Jean said again. “First we miss
the grand opening—not that your average dig is run with military
precision—and now we might miss Hugh playing tonight.”

“
We’re always hearing Hugh playing. The
walls between our flat and his aren’t so thick as all
that.”

“
You know what I mean. Hugh in session
with the students at the Gallowglass School, since he’s this week’s
artist-in-residence. A shame Gallowglass the group never could get
going again after the accident. You remember Hugh talking about
that, how their van slid off the road in a snowstorm, crashed into
a gully, and injured them all. Wat Lauder never really recovered,
and their comeback was a bust.”

“
Losing him’s what drove the last nail
into their coffin. Intending no pun.”

“
Poor Maggie Lauder, losing her father,
and her mother so ill. I hope she’s found what she thinks she’s
found at the chapel, although I doubt if it’s actually there to be
found . . . Oh! There’s the sign. Farnaby Island.
Ferry.”

Alasdair guided the car onto a strip of part
blacktop, part gravel. It jounced over a railroad crossing and
between several high shrubs to emerge in a parking area pitted with
mud puddles. Six or eight vehicles sat there, no two pointed quite
the same direction. Jean had eyes only for the small ferry just
pulling into the dock. “Yes! Plan A is officially under way.”

Wasting no words on the obvious, Alasdair
parked the car, leaped out, opened the boot and extracted their
bags. They were heading for the ferry, their suitcases jolting
behind them, by the time it scraped against the pier’s weedy
stones.

Above the smooth lower flanks of the boat, a
metal panel walled off a flat deck like a mini-aircraft carrier’s.
As the rumble of the engine changed tones, the rusty metal sheet
creaked, gaped, and then with a mighty squeal and clang unfolded
onto the dock.

You could only bring a vehicle to Farnaby
Island with special permission. Jean had been anticipating stepping
off a curb or two and not looking either way, let alone both, an
indulgence that would be suicidal in Edinburgh.

But no one brought any vehicles away
from Farnaby, either—not one rolled off the ferry. Several men and
women surged over the now almost-horizontal metal panel, up the
dock, and into the parking lot. Jean detected not a smile among
them, even at finding their paths clear to happy hour at the
closest pub. The sea was calm, only small waves tripping and
falling onto the beach beyond the pier, so they couldn’t be
seasick. Or not all of them could be seasick, although one or two
might have a stomach as delicate as that of Jean’s friend and
professional partner at
Great
Scot
, Miranda Capaldi, who would get queasy in a hot
tub.

Kate and Julia: Slave Girls of the Raj by Lindsey Brooks
The Man Who Broke Napoleon's Codes by Mark Urban
The Runaway Princess by Kate Coombs
Fever Pitch by Heidi Cullinan
A Future Arrived by Phillip Rock
Blowback by Peter May
Just One Bite by Kimberly Raye
Muslim Fortresses in the Levant: Between Crusaders and Mongols by Kate Raphael
1996 - The Island of the Colorblind by Oliver Sacks
Revenge by Joanne Clancy