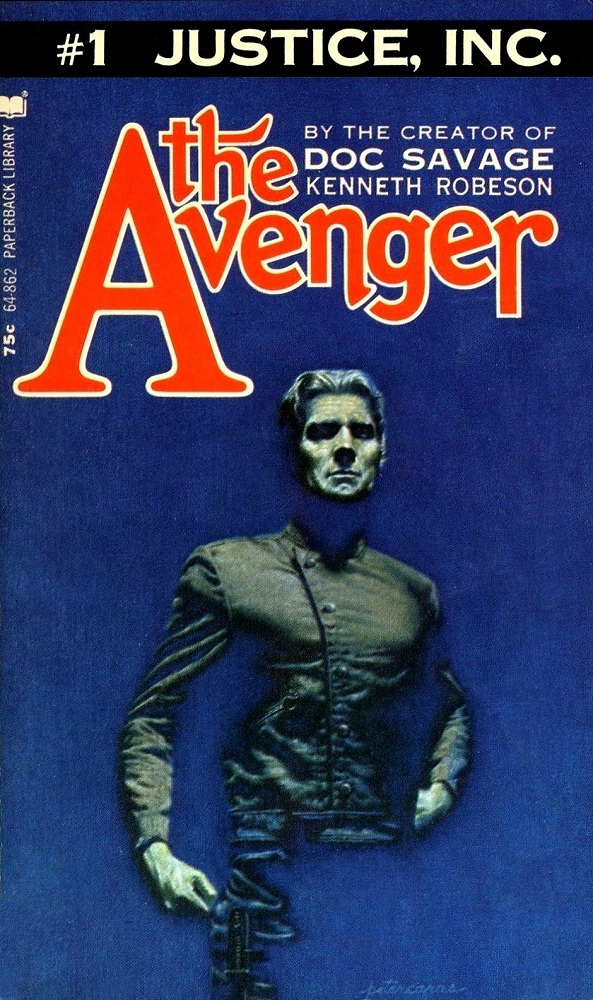 Also In This Series

C
OVER
I
LLUSTRATION
BY
P
ETER
C
ARAS

In the roaring heart of the crucible, steel is made. In the raging flame of personal tragedy, men are sometimes forged into something more than human.

It was so with Dick Benson. He had been a man. After the dread loss inflicted on him by an inhuman crime ring, he became a machine of vengeance dedicated to the extermination of all other crime rings.

He turned into the person we know now: a figure of ice and steel, more pitiless than both; a mechanism of whipcord and flame; a symbol of destruction to crooks and killers; a terrible, almost impersonal Force, masking chill genius and supernormal power behind a face ever as white and dead as a mask from the grave. Only his pale eyes, like ice in a polar dawn, hint at the deadliness of the scourge the underworld heedlessly invoked against itself when crime’s greed turned the retired adventurer, Richard Henry Benson, into— The Avenger.

Under the May sun, the Buffalo airport looked as peaceful as a pond in a calm. Like a pond it had its water bugs—planes, some standing, one coming onto the runway, several wheeling into position for a take-off.

Calm and peaceful in the late May sun. Looking back on it, Richard Benson found it almost impossible to realize that in that peace and orderliness had begun the fantastic thing of horror that was to change the whole course of his life.

But the seed of tragedy did sprout from that field. And the thing did happen to him.

A ten-passenger Douglas was one of the two planes with props idling for a getaway. It squatted on the runway receiving the last luggage of passengers into its maw. And Benson saw it from the window.

Benson was talking to the agent.

“I’ve got to get to Montreal at once! You understand? I’ve got to!”

The agent was listening respectfully. People always listened respectfully to Benson. His jet-black hair, framing a lean, square face, his pale-gray eyes, flaming with vitality and will, his erect, whipcord body and swift, sure movements, inspired respect on sight.

But just the same the agent shook his head.

“The Montreal plane leaving now is booked solid. Didn’t they tell you at the downtown office?”

“They told me. But there
has
to be a place for the three of us. My wife’s mother is dying in Montreal.”

He put his hand—the kind of slim-fingered, long hand that is made up of steel wire and leather sinew—on the arm of Mrs. Benson, who added mute appeal to his out of soft brown eyes.

She was beautiful. Benson’s wife. Tall and lovely and slim, with soft gold hair and dark-brown eyes. She looked like a gold-crested gray dove in her tweed traveling suit. Benson’s face softened as he looked at her. It always did. And the hard flame in his gray eyes always softened when they rested on the dainty little figure beside Alicia Benson—his little daughter, as brown-eyed and gold-haired as her mother. A wife and girl to be proud of, those two!

The agent was shaking his head, looking sympathetically at the three.

“It simply can’t be done. There’s a plane at midnight—”

“Can’t wait that long,” snapped Benson. His face was a lean square of inflexible purpose. There was on it the look that had come there in his varied and adventurous past, when some problem unsolvable to ordinary men came up—and was solved by him.

“We haven’t a plane on the field to be chartered,” said the agent. “I’m afraid you simply won’t be able—”

It was then that Benson looked out the airport office window and saw the Douglas wheeling to the runway.

Without a word to the agent he hurried to the door, with Alicia and little Alice coming after him.

“What are you going to do, darling?” Alicia Benson asked. Her voice was as lovely as the rest of her. In it was implicit trust in this gray flame of a man.

The banging door shut off his sentence. He hurried to the airliner.

At rest Benson compelled respect. In motion he roused something like awe. Only about once in a decade do you see a man move with the flow of easy power, the perfect co-ordination and the rhythm of intense vitality owned by Richard Benson. Yet he didn’t look particularly big. He was no more than five feet eight, weight about a hundred and sixty.

He and Alicia and little Alice got nearly to the plane. The double metal door was still open, the stairs still in place. An attendant came around the plane and stood in front of them.

“You the three who have the vacant seats on this plane?” the attendant asked.

He was tall and bony, with knobs of hands and with red, coarse skin. Sandy eyebrows were like sand ropes over his frosty blue eyes.

Benson stared at the man, eyes pale blazes of triumph.

“So there are three seats on that plane! Everybody said there was no chance to board her. Perfect conspiracy to keep us from getting aboard! But we’ll show ’em.”

“If you haven’t the tickets—” the attendant began, with a heavy Scotch burr.

“We’ll pay at the other end. Fix up the irregularity any way you please. Come on, sweethearts.”

A Book of Death and Fish by Ian Stephen
Bonds of Blood by Shauna Hart
Clouds by Robin Jones Gunn
The Tamarind Seed by Evelyn Anthony
Final Demand by Deborah Moggach
Rapunzel by Jacqueline Wilson
The Aberration by Bard Constantine
The First Last Boy by Sonya Weiss
Pieces of Lies by Angela Richardson
Attic Clowns: Volume Four by Jeremy Shipp