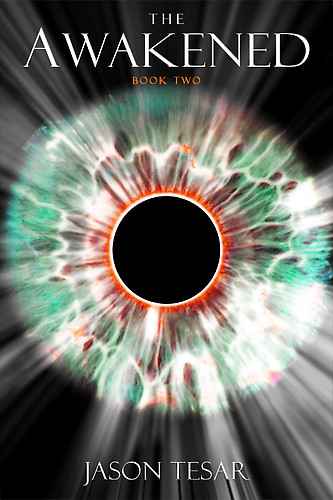 Published by 4shadow Publishing at Smashwords

Books
One
through
Three
are available in a single print edition at most online retailers. For more information, visit
http://www.jasontesar.com

Quotations taken from the Book of Enoch, Not in Copyright, Translation by R H Charles, 1917

The History and Prophecy

(a)…the angels which kept not their first estate, but left their own habitation…
wandering stars
, to whom is reserved the blackness of darkness forever.

(b)And it came to pass when the children of men had multiplied that in those days were born unto them beautiful and comely daughters. And the angels, the children of the heaven, saw and lusted after them…

(c)And they were in all two hundred; who descended.

(d)And all the others together with them took unto themselves wives, and each chose for himself one, and they began to go in unto them and to defile themselves with them…

(e)…taught men to make swords, and knives, and shields, and breastplates, and made known to them the metals of the earth and the art of working them…

(f)There were giants in the earth in those days; and also after that, when the sons of God came in unto the daughters of men, and they bare children to them, the same became mighty men which were of old, men of renown.

(g)…whose height was three thousand ells, who consumed all the acquisitions of men. And when men could no longer sustain them, the giants turned against them and devoured mankind. And they began to sin against birds, and beasts, and reptiles, and fish, and to devour one another's flesh, and drink the blood…

(h)…and as men perished, they cried, and their cry went up to heaven...

(i)Therefore, I will raise up one from among those you despise. And I will
awaken
his eyes to the mysteries which I have hidden from men since the foundations of the world. His feet will I make to tread upon the paths of destruction and his hands to make war. He will uproot the seeds of corruption which you have sown throughout the earth. And then you will know that I am the Lord and my justice is everlasting.

From the writings of Ebnisha(i) 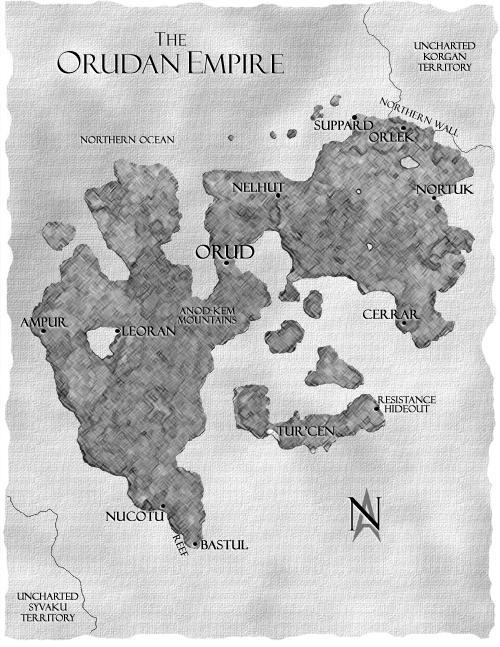 The feeling of falling was gone, replaced by a suffocating presence. Adair was conscious of his limbs moving sluggishly around him. At first, there was only the feeling of pressure against his body. Then his skin began to detect temperature.

The awareness that he was under water suddenly dawned on him and caused an initial panic. But his years of conditioning as a soldier took over. He stopped struggling in the water and held still, trying to determine which direction was up. A bubble escaped his lips and rolled sideways across his face, telling him the way to the surface.

He opened his eyes and felt the stinging saltwater. At first, his vision was cloudy. Then a flashing light drew his attention to his left. He turned his head and peered through the darkness.

There was another flash of blue light that turned white at the edges, illuminating something next to it. As Adair watched, the object moved.

It was the head of some creature.

Adair suddenly felt vulnerable and kicked his legs hard. He grabbed at the water and pulled himself upward. Without being able to see, he had no idea how fast he was swimming, but it seemed too slow.

Something crashed hard against his head and he winced, letting out a mouthful of air. Instinctively, he lashed out with his hands and felt a smooth surface above his head.

Again, panic threatened to overtake him.

He glanced in all directions, then noticed that the darkness was less intense to his right. He moved toward it and as he did, the water began to grow lighter. He swam faster. Then the light was above him. He swam upward again, but this time, nothing was blocking him.

Starved of air, he began to move the air from his mouth down to his lungs and back again. It didn’t help, but seemed only to distract his body from the fact that it would soon drown.

Faster and faster he swam and the light above grew more intense. He looked down into the darkness below and could now see a black shape coming up through the murky water beneath him.

He kicked his legs harder, then looked again.

The dark creature was gaining on him. Bubbles were coming from its distorted face, as two long fins propelled it through the water.

Adair looked up and saw the surface. He was only ten feet away, but it felt like a mile.

He broke through the surface into a hazy sunlight that instantly blinded him. He gasped for breath, taking in large quantities of air. Without the benefit of sight, he randomly chose a direction and began to swim as fast as his limbs would carry him, dreading that at any second he would be pulled under by the creature below.

It took only a few seconds for his eyes to adjust. To his surprise, he saw land.

That’s not possible! I shouldn’t be anywhere near land.

He turned around and saw that he was in the center of a muddy bay, roughly a mile across. There was land on every side, covered by lush, green vegetation.

Then he saw the creature. It was only ten yards away, its head sticking out of the water. Light reflected off one giant eye at the center of its black face. Its breath hissed in and out. All of a sudden, another head popped out of the water…then two more.

Adair turned and swam for the shoreline. His heart was racing from both fear and exhaustion. Though he struggled with every ounce of his being, his progress seemed terribly slow.

Something grabbed his ankle from behind.

Without looking, he kicked hard and broke free of the grasp.

A second later, something clamped down hard on his legs.

Ready to fight to the death, he spun around and punched the head of the nearest creature with all his might. The hit landed on the side of its giant eye and it reared back.

Adair’s hand exploded with pain and he knew instantly that he had broken bones.

But he was free again.

He backed away quickly, grabbing at the water to get some distance between him and these things, whatever they were.

The one that he punched reached up to its head with two arms and began to pull its face apart.

Adair flinched in horror, then stopped.

It was a man. He was removing something like a shield from his eyes and lifting it over his head. He spit out something from his mouth that was connected to a rope running over his shoulders. His head was covered in a tight black fabric of some sort, with an opening that only revealed his dark-skinned face, now covered in blood from a gash in his forehead.

The man spoke harshly in a foreign tongue.

Though Adair didn’t understand the language, he could tell that the man was cursing.

The other man who had grabbed him, turned around and raised one hand into the air, waving it back and forth.

Adair looked over the man’s shoulder and could see a dark shape floating on the water a hundred yards away.

Then, there was a bark, followed by a faint growling sound that got louder as the boat raced across the water. Adair watched in amazement.
I’ve never seen a boat move this fast. What’s driving it? There’s no wind. I don’t see any oars. What kind of boat is this?

The growling ended abruptly as the boat veered to the starboard and came to a stop. The wake moved past Adair, lifting him slightly as he treaded water.

A man aboard the boat stood up. His strange clothes were mostly green, with patches of different colors all over. He wore pants and a tunic that covered his arms all the way to the wrists. He yelled at Adair in the same language that the other men had used. Then he waved his hand and beckoned Adair to come to him.

The man aboard the boat reached for something hanging from a strap around his neck. He raised it to his shoulder with both hands, then leaned his head to the side and closed one eye.

Adair looked at the object in the man’s hands. If it was a crossbow, he couldn’t see the arrow, or a bow string for that matter. There was nothing intimidating about it. There were no sharpened points, nothing to impale him. He thought briefly that he should be alarmed, but somehow he was not.

A few seconds of silence passed as the man peered at him through one eye.

Then the man moved his weapon a few inches to the left. A flash of fire exploded from the weapon, accompanied by ear piercing claps of thunder in rapid succession.

The water next to Adair burst into numerous fountains, reaching up to the sky. Adair flinched. When the water settled, he looked back to the man in the boat.

He was still aiming his weapon. With one hand, he waved for Adair to come to the boat.

When he neared the boat, another man reached down and grabbed hold of his tunic and pulled him from the water and into the boat. He dropped Adair to the floor, then backed away toward the stern.

Slowly lifting his head, Adair noticed that there were a total of three men. The other two also had similar weapons on straps around their necks, pointing them in his direction.

Adair looked to the empty prow of the ship, then back to the men.
They want me to move.
He obeyed, moving cautiously. When he had gone as far as he could, he stopped, leaning against the soft side of the boat.

What is this?
The boat appeared to be made from a pliable skin of some kind, stretched over a rigid structure of bones. He had never seen anything like it.

A low growl startled him and he turned toward the stern.

Two of the men were still pointing weapons at him, while the third was sitting down and holding on to a handle.

The Year the Swallows Came Early by Kathryn Fitzmaurice
The Pirate Ruse by Marcia Lynn McClure
Brazen by Katherine Longshore
Most Talkative: Stories From the Front Lines of Pop Culture by Andy Cohen
The Queen's Mistake by Diane Haeger
The Searcher by Christopher Morgan Jones
Lust by Bonnie Bliss
Stolen Love by Carolyn Jewel
THE DOMINO BOYS (a psychological thriller) by D. M. Mitchell
Crossways by Jacey Bedford