The Babet & Prosper Collection I: One Less Warlock, Magrat's Dagger, A Different Undead, and Bad Juju 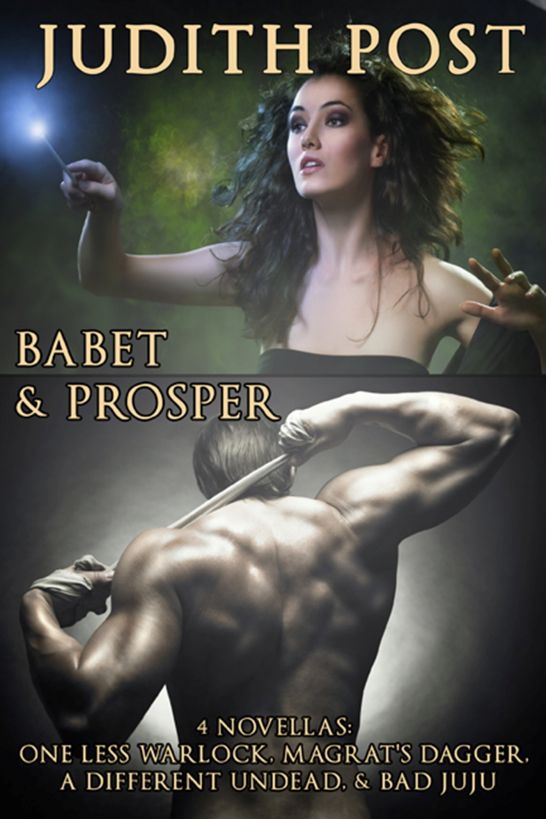 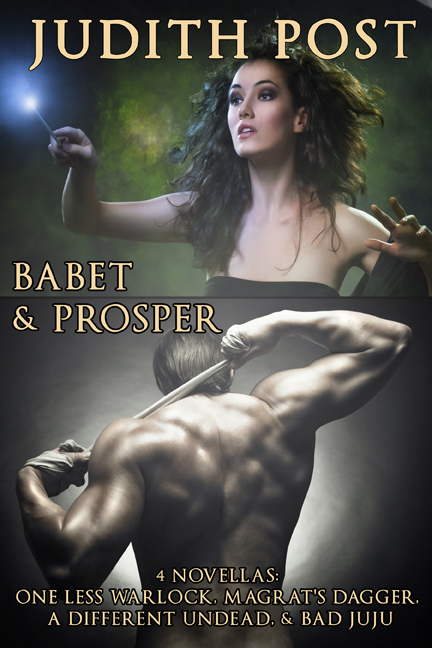 The Babet & Prosper Collection I 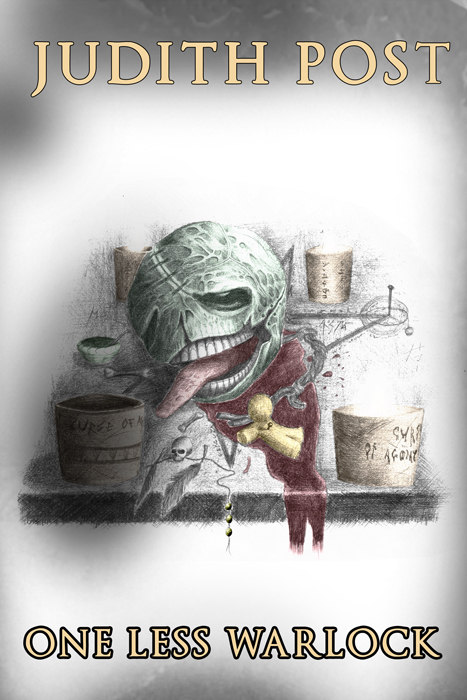 The Second Babet and Prosper Novella

Hatchet came for Babet at three in the
morning. His nickname fit him. His head was wedge-shaped, and
everything about him looked sharp and dangerous—a perfect man to
work liaison between the supernaturals and the human enforcers.

She answered the door before he knocked. He’d
waken her when he called. His news made her hustle to be ready. No
one would mourn Emile, and everyone would wonder who’d been smart
enough to kill him. No one thought it possible. The warlock seemed
indestructible.

“Who found him?” Babet asked, as she climbed
into Hatchet’s squad car.

“His personal servant. Emile sent him out
while he entertained a friend. He wasn’t to return until two.”

“Do you know who Emile’s visitor was?” Babet
glanced at a group of partiers, clinging to each other to stay
upright, on the sidewalk outside of one of River City’s bars. Emile
lived in a nearby suburb, a rich, secluded area that guarded its
privacy.

Hatchet shook his head. “Emile dismissed
Simon before dinner was served and ordered him to stay away until
two. We’ve knocked on neighbors’ doors, but no one saw
anything.”

That didn’t surprise Babet. Emile’s friends
wouldn’t make a public entrance. No, she amended herself. Emile had
no friends that she knew of. He threw lots of parties, but rarely
entertained one-on-one. Whomever he’d summoned in the wee hours of
the morning might have been dreading their meeting. Or else hoped
to form a brief alliance with the warlord—but always at a
price.

Hatchet’s headlights caught a man and woman
leaning against a building at an alley’s entrance, their bodies
smashed so tightly against each other, Babet couldn’t tell where
one ended and the other began. The man’s hands roamed the woman’s
curves, then slid under her blouse. Risky, in River City, where
vampires and succubi prowled bars looking for willing mortals.
Rumor had it that Emile called and paid female mortals to pleasure
him, not taking any chances that a supernatural might take
advantage of him during a heated moment.

“I’ve heard that Emile always hired humans
for sex. Does your department know which agency he called?”

“You’ve got to be kidding.” Lillith ran the
biggest whore house in the entire area. She supplied whatever a
person fancied—mortals, witches, Weres…you name it. But being a
succubus herself, her specialty was her own kind. And she had
plenty of takers. No money passed hands. For the price of a tiny
bit of your life force, a person got a sex partner that left him
drained in unimaginable ways when the door shut behind her. Or him,
Babet reminded herself, if the call was for an incubus. “I thought
Emile would be more discerning, more secretive.”

“Who’s more secretive than a succubus?”
Hatchet passed the public park that separated the plebeians from
the patricians in their town. “If you want a striped virgin,
Lillith can send you one. She guarantees her product. Emile didn’t
have to worry about halfbreeds when he used her.” The park behind
them, Hatchet entered the ritzy section of town, and the houses
changed immediately. No more bungalows or townhouses. Huge mansions
towered skyward with small side yards and intimate back patios.
Lush landscaping. Even the air smelled more refined.

Hatchet pulled into a driveway, pushed a
button on the gatepost, and waited for the metal gates to swing
open. Babet studied the three-story, narrow, yellow house. With its
white trim, glossy black front door, and black, wrought iron bars
on each window, it looked both cheerful and intimidating. It was
more daunting inside, Babet knew. She’d been summoned here a few
months ago. She hadn’t liked it, but she didn’t think it wise to
refuse.

Emile had wanted to hire her. He was looking
for a witch who proved elusive. Babet turned him down. He couldn’t
argue with her reasoning. She was a witch. A lot of her friends
practiced magic. If she worked for him, she’d be cut off—no more
information, no one to call on for backup. She heard later that he
hired a vampire. As far as she knew, the vamp was still
looking.

Hatchet drove to the sidewalk that led to the
front door and parked.

Babet looked at a group of men huddled on the
stoop and frowned. “What’s the problem? Why is everyone
outside?”

Hatchet gave his slim smile. “Didn’t I tell
you? We can’t figure out how to get in.”

She stared in surprise. “I thought the
servant came home.”

“He did. The door was locked. He doesn’t have
a key. No one seems to.”

“Then how do you know Emile’s dead?”

“Look through the window.”

Babet stepped past the blooms that bordered
the house to press her face against the glass. Emile lay on the
floor in the living room, not moving, looking completely relaxed,
except that his eyes were wide open and didn’t blink.

She turned to the men. “What am I supposed to
do? How can I help you if I can’t get inside?”

A deep voice came from the shadows of the
driveway as footsteps sauntered toward them. “You’re the best in
the business, Babs. Use your tricks to open the doors.”

Babet cocked her head. No one else dared to
call her Babs. The Were had some nerve. But then, she already knew
that. He was looking especially good tonight, dressed in khakis and
a black tee. He could make casual look drool-worthy. “I thought
your department hired a witch for moments like these.”

“She came. She went. The doors are still
locked.” Prosper grinned. “No one would lock you out, hon, not even
Emile. I bet he had a special hex to make the door spring open to
beckon you in.”

“But I bet he appreciated the package it came
in.” His eyes looked her up and down. Prosper had always been a
sucker for shapely legs and long, dark hair.

Babet shrugged. “He invited me here once. I
came to a party or two. His magic gave off certain vibes, but it
will take me a while. At least an hour. And the only reason I can
help you at all is because his power’s gone. The magic is already
fading.”

Prosper’s eyebrows rose. He hadn’t thought of
that. But every witch knew it took energy to keep up shields.
Emile’s energy was stronger than most witches’, but it wasn’t
infinite. When he died, the shield did too. That didn’t mean there
weren’t curses and spells that needed attention.

Babet shooed the men to the back of the house
and slipped out of her shoes. She planted her feet firmly on the
lawn, bonding with the earth. She inhaled deeply and felt the
energy rush into her. She raised her hands and scanned the air for
whiffs of Emile’s magic. Lights shimmered to life, and she studied
the chants and spells that were etched in them. They were
intermingled and entwined, a complex concoction of power. She began
humming counter spells of her own, starting with the smallest and
working her way to the most potent.

Prosper came to check on her, saw the sweat
dewing on her forehead, saw her arms quiver with fatigue, and left
her alone. Once she removed the spells, she removed the hexes. And
only then did she call Prosper and tell him to try the key.

He raised a brow and looked at her. “Are you
sure?”

“Hell, no. Emile’s the most powerful warlock
I’ve met. But I don’t feel any more magic. Maybe it’s gone.”

Babet ran a hand through the strands of dark
hair that clung to her face, pushing them behind her ears. Working
magic was hot work. “I’m not turning the key,” she told him.

A growl rumbled in his chest, but he inserted
the key and turned the lock. Then he stepped back. The door creaked
open. No sparks shot out at them. No dragon charged from the
kitchen.

Prosper locked eyes with her. Brown eyes,
like hers, only his looked like melted chocolate. His skin was the
color of bronze. She wasn’t sure what his nationality was, but it
was all things good.

She asked, completely out of context for the
moment, “Are you Italian?”

His mouth quirked at one corner. “A
little.”

“A little Creole, a little mulatto, a dash of
this, a splash of that.”

“I wish I had that recipe.”

He laughed. “If I’m still around after I step
inside this house, I’ll share it with you.”

“Lucky me.” She would be too. He’d shared
before, and it was memorable.

They both held their breaths as he stepped
over the door’s threshold. He started across the floor, was still
in one piece, and called for the others to follow him inside.

Babet took that as an invitation to join
them. She circled Emile’s body with Hatchet and four other cops,
studying it. There was nothing to see.

Prosper nodded and the team went to work.
Pictures. Evidence bags. When they finished, an older man stooped
and turned Emile over. Must be the medical examiner, Babet decided.
But they didn’t need an expert to see that something sharp had been
rammed into Emile’s back, probably puncturing his heart.

Hatchet whistled. “Holy crap, who got close
enough to stab him?”

“And how did they get inside the house?” the
servant asked. A mortal, by his scent.

Babet shrugged. She had no answers.

Prosper turned to her again. “You have enough
guard spells on your house to protect you against almost anything,
don’t you? What would Emile have?”

She ticked spells off on her fingers.
“Protection spells against enemies. Spells so no one else’s magic
can work in his house. Spells against poisons…”

Prosper held up his hand. “We get the idea.
No one should be able to kill the guy here. So how did it
happen?”

“It couldn’t be a witch.” Even if someone
tried to disguise her magic, Emile would smell it. “It couldn’t be
an enemy, coming with the intention of harming him, or they
couldn’t pass the invisible potion around the perimeter of his
property.” She’d sensed it when she crossed it.

“Wait.” Hatchet rubbed his narrow chin. “Who
else would stick a guy unless he was an enemy?”

Babet had to think about that. “He might not
have come with the intention of killing Emile, but that might have
changed. Emile probably pulled something dirty, and the person
became an enemy before he left.”

“With Emile….yeah, that’s something to
consider. But where did the person get the weapon? Wouldn’t Emile
notice someone picking up a butcher knife and coming for him?”

“Nothing in this house could be used to hurt
Emile,” Babet said.

Atavus by S. W. Frank
The Curse of Sangrook Manor by Steve Thomas
Friends of a Feather by Lauren Myracle
The Savage Boy by Nick Cole
Fill Me by Crystal Kaswell
Broken Fairytales by Alexander, Monica
Cut to the Quick by Kate Ross
Never Have I Ever by Clearwing, August
mythean arcana 06 - master of fate by hall, linsey
A Biscuit, a Casket by Liz Mugavero