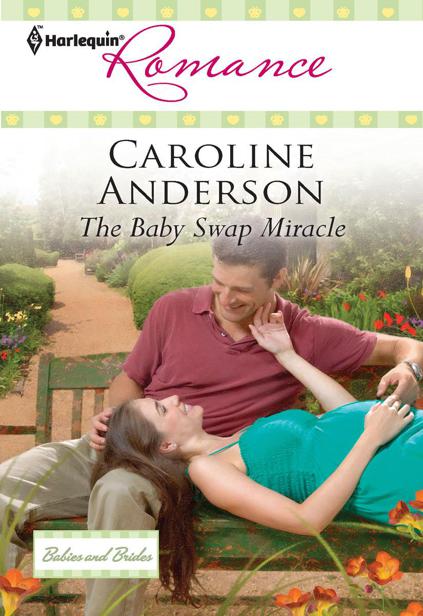 Wedding bells and the pitter-patter of tiny feet can be heard in our February Harlequin Romance novels! This month we’re celebrating couples saying “I do” and the arrival of tiny miracles, little surprises and bouncing bundles of joy!

So sit back, relax and discover six very different paths to parenthood as single fathers find their brides, couples become families, and babies find their perfect homes. Don’t miss any of the Babies and Brides books this month:

THE NANNY AND THE CEO

When I was asked to write a book for this special Brides and Babies month, it was a no-brainer to say yes! I love brides and babies, but how to find something really unusual and original, a new twist on a very familiar theme? I bounced some ideas around, but one kept coming to the top. Two people, both single, sort of, both doing something essentially for someone else—and then it all goes wrong.

Or does it? A baby is in the making, a baby who was never planned, could never even have been dreamed of and yet is, in so many ways, a miracle for them all. Emelia thought she was carrying her late husband’s child, but the IVF clinic have blundered and the father is in fact Sam, a man who’s been hurt, whose heart is deeply guarded. Coming to terms with the shattering and life-changing implications of this baby takes both of them firmly out of their comfort zone, but although Sam’s commitment to the baby is absolute, Emelia is reluctant to accept his help. Sam wants the baby close to him, Emelia wants her independence. It’s complicated, and falling in love just complicates it further. Or does it?

See for yourself how they resolve their difficulties and find their happy ending.

Caroline Anderson
has the mind of a butterfly. She’s been a nurse, a secretary, a teacher, run her own soft-furnishing business and now she’s settled on writing. She says, “I was looking for that elusive something. I finally realized it was variety, and now I have it in abundance. Every book brings new horizons and new friends, and in between books I have learned to be a juggler. My teacher husband, John, and I have two beautiful and talented daughters, Sarah and Hannah, umpteen pets and several acres of Suffolk that nature tries to reclaim every time we turn our backs!” Caroline also writes for the Harlequin
®
Medical Romance
™
line.

To Samantha for all the gen on IVF.
Congratulations to you and your family!

‘O
H, STOP
dithering and get it over with!’

Putting the car back in gear, Emelia turned into the IVF clinic car park and cut the engine. In the silence that followed, she could hear her heart pounding.

‘Stupid,’ she muttered. ‘It’s just an admin hiccup.’ Nothing to feel so ridiculously wound up about, but she was tempted to drive away again right now.

Except she couldn’t, because she couldn’t stand the suspense another minute. She just had to
know
.

She took the keys out of the ignition and reached for her handbag. The corner of the envelope stuck out, taunting her, and she stared at it for a second before getting out of the car. There was nothing to be gained by rereading the letter. She’d nearly worn the print off looking at it, but she wished she wasn’t on her own—

‘Sam?’ Her heart stalled at the sound of his voice, and she spun round, not really believing it—but he
was
there, not a figment of her imagination but the real flesh and blood Sam Hunter, walking towards her with that long, lazy stride, in a suit she’d lay odds was handmade. She’d never seen him in a suit before. He’d usually worn jeans or casual trousers, but he looked good in it. More than good—he looked even more gorgeous than she’d remembered.

Broad shoulders, long lean legs, and those eyes—spectacular eyes the colour of slate, fringed with sinful black lashes. They had the ability to make her feel she was the sole object of his attention, the focus of his entire world, and as they locked with hers she felt a rush of emotion.

‘Oh, I’m so pleased to see you!’ she said fervently. ‘What on earth are you doing here? Not that I’m complaining! How are you?’

He smiled, those eyes crinkling, the tiny dimple in his lean, masculine cheek turning her legs to mush. ‘I’m fine, thanks. And you—you’re looking…’

‘Pregnant?’ she said wryly, as his eyes tracked over the lush, feminine curves that had grown even curvier, and Sam gave a little grunt of laughter and drew Emelia into his arms for a quick hug. Very quick, because the firm, round swell of her baby pressing against him sent a shockwave of longing through his system that took him completely by surprise. He let her go hastily and stepped back.

‘I was going to say amazing, but—yeah, that, too,’ he said, struggling to remember how to speak. ‘Congratulations.’

‘Thank you,’ she murmured, feeling a little guilty—which was silly, because it really wasn’t her fault that his brother’s wife still wasn’t pregnant when she was. ‘So—what
are
you doing here? I thought Emily and Andrew were taking some time out from all this?’

‘Yeah, they are. “Regrouping” was the word Andrew used.’

She scanned his face, really puzzled now; his smile was gone, and she felt her own fade as she read the troubled expression in his eyes. ‘So—why
are
you here, Sam?’ she asked, and then apologised, because it was none of her business. Only, without Emily and Andrew, the presence of their sperm donor was—well, unnecessary, frankly.

‘I’ve got an appointment to see the director,’ he said.

He frowned, his dark brows drawing together, his firm, sculpted mouth pressing into an uncompromising line. ‘I have no idea,’ he said after a moment, ‘but I intend to find out. Whatever it is, I don’t think it’s trivial.’

He gave a quiet grunt. ‘Oh, plenty, but all without foundation. They’ve written to Emily and Andrew, as well, but of course they’re away for a few more days so they haven’t got it yet. And they wouldn’t tell me anything, either, but as you say, they were cagey. The only thing I can imagine is there’s been a mix-up.’

She stared at him for a moment, then felt the blood drain from her face. ‘This is really serious, isn’t it?’ she said unevenly. ‘Like that thing in the news a while ago about switched embryos. That was horrendous.’

‘Yes. I saw the media frenzy.’

‘I thought it must be a one-off, because it’s so tightly regulated, but—what if it’s happened here, Sam?’ she asked, her blood running cold. ‘There were only the two of us there that day, me and Emily. What if they mixed our embryos up? What if this is their baby?’ Her knees suddenly weak, she floundered to a halt as it sank in that the baby she’d thought of as hers and James’ might not be hers to keep.

Tears scalding her eyes, she pressed her fingers to her lips, her other hand going instinctively to shield the baby.
No! She couldn’t hand it over to them—but if it wasn’t hers…

Sam studied her in concern, his eyes drawn to the slender hand splayed protectively over that gentle swell. Please, God, no, he thought. The other batch of embryos had all died before they could be implanted into Emily, but if Emelia was right, then they’d been hers, her last chance to have her late husband’s child, and when this baby was born, she’d have to hand it over to Emily and Andrew, and she’d be left with nothing. All the plans, all the joyful anticipation would be crushed with a few words.

It’s not your baby.

The memory scythed through Sam, and he slammed the door on it and watched as another tear spilled over her lashes and tracked down her face. Oh, Emelia…

He lifted his hands and smoothed the tears away with his thumbs, gutted for her. ‘It may not be that,’ he offered without conviction, his fingers gentle.

‘It must be,’ she said, her voice expressionless with shock. ‘What else could it be?’

What else, indeed. He dropped his hands and stepped back. ‘Come on, let’s find out,’ he said, impatient now to get this over with. ‘It might be something else entirely—something to do with the fees, perhaps.’

‘Then it would be the finance people dealing with it, not the director,’ she pointed out logically. ‘No, it’s something else, Sam. Something much worse. I think it
must
be the embryos.’

Her smoky green eyes were still glazed with tears, her lashes clumped, but she sucked in a breath and her chin came up, and he laid a hand on her shoulder and tried to smile. ‘Why don’t we find out?’ he said again, more gently, turning her towards the entrance, but she hesitated, and he could feel her trembling.

He felt her hand grope for his, and he threaded his fingers through hers and gave a quick squeeze. ‘Ready?’

She nodded, tightening her grip.

She shook her head to clear it as Sam ushered her out of the building into the spring sunshine. Odd, it had been cloudy before, and now it was glorious. How ironic, when her world had been turned upside down.

‘So—what now?’ she asked, looking up at him for guidance and grateful for the feel of his hand, warm and supportive in the small of her back.

‘Well, I don’t know about you but I could do with a nice, strong coffee.’ He smiled, but the smile didn’t reach his eyes. They were strangely expressionless, and she suddenly realised she didn’t know him at all. Didn’t know what he was thinking, how he was feeling—which under the circumstances wasn’t surprising, because she wasn’t sure what she was thinking, either.

She tried to smile back, but her lips felt stiff and uncooperative and her eyes were prickling. ‘Me, too. I haven’t had coffee for months but suddenly I feel the need.’

‘Two. I’ll go straight on from there.’ And it would give her the next few minutes alone to draw breath.

She nodded, and got into her car, following him on autopilot, curiously detached. It all seemed unreal, as if it was happening to someone else—until she felt the baby move, and then reality hit home and her eyes filled. ‘Oh,
James, I’m sorry,’ she whispered brokenly. ‘I tried so hard for you. I really tried.’

She felt something thin and fragile tear inside her, the last tenuous link to the man she’d loved with all her heart, and she closed her eyes briefly as she pulled up beside Sam, giving her grief a moment. It was a gentle grief, a quiet sorrow now, and it was her constant companion. She was used to it.

Was she? Probably not, but she smiled up at Sam and got out of the car and let him usher her in. They’d gone, as usual, to the riverfront café they’d all frequented in the past. Before, she’d always had fruit tea. This time, settling into a chair opposite Sam, she had a frothy mocha with a chocolate flake to dunk, and a sticky Danish pastry, also laced with chocolate.

The Crushes by Pamela Wells
Stepbrother Bastard by Colleen Masters
Travels with Barley by Ken Wells
Dick Longg: Sexual Saviour of the Universe by Mark Leigh
Turkey Trouble on the National Mall by Ron Roy
Among the Powers by Lawrence Watt-Evans
Marry Me by Dan Rhodes
Out of the Ashes by Michael Morpurgo
Sweet Disgrace by Cherrie Lynn
Eyes by Joanne Fluke