The Bangkok Asset: A novel 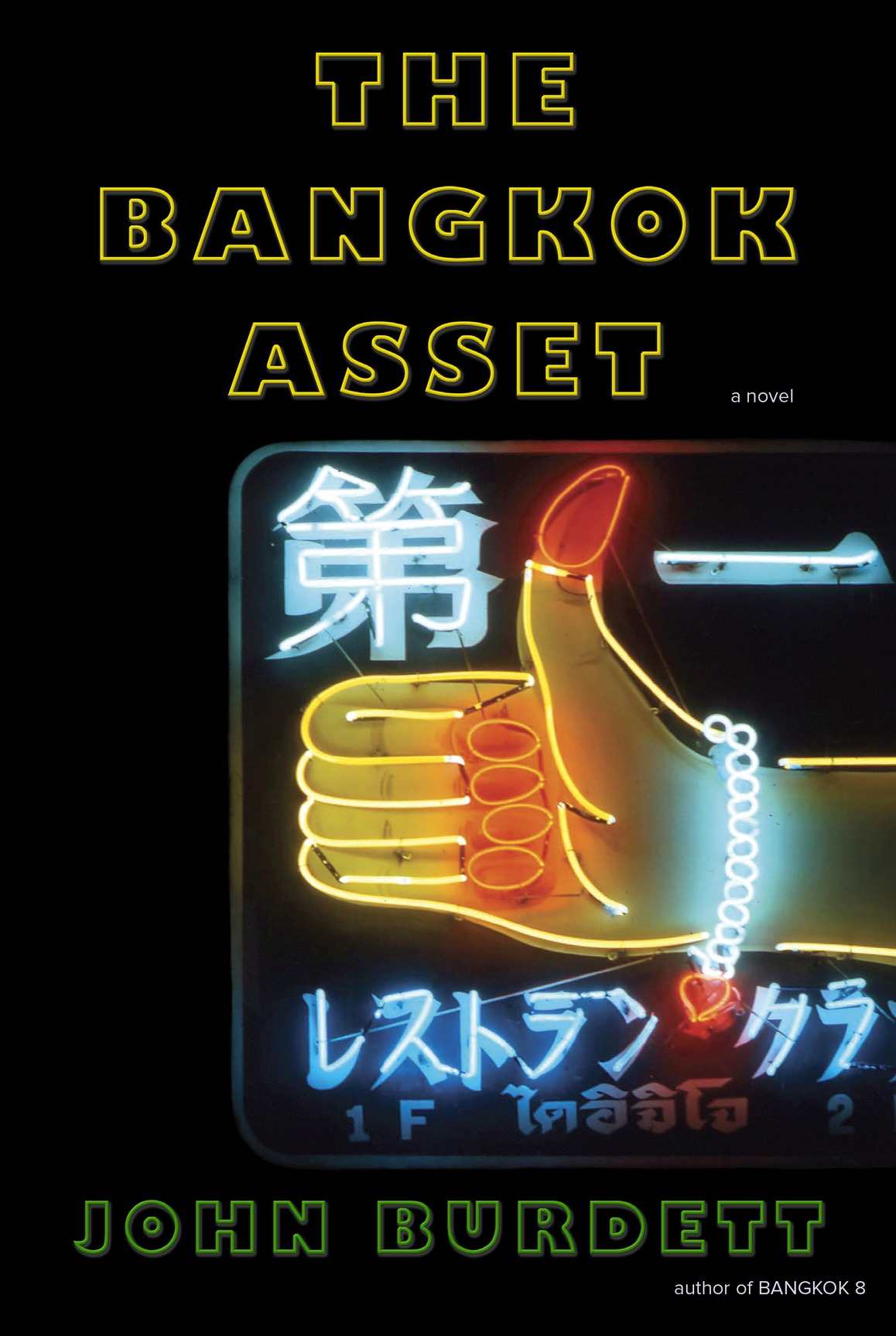 The Godfather of Kathmandu

A Personal History of Thirst

Part I: The River

And in grateful memory of F. W. Burdett and Patrick Harry Wilson (sometimes it takes two)

and Joel McCleary for introducing me to MKUltra

This novel was all but complete before May 22, 2014; therefore, it has not been possible to address the many changes that have taken place in Thailand since the military coup of that date.

Phenomena have no signs.

—The Buddha (corroborated by Ludwig Wittgenstein)

S
o I’m at my desk in the open-plan area of District 8 Police Station when a rumor blows through the room similar to a gust of wind in a rice paddy. Like Big Data, Big Rumor has no obvious source or contact point and is not coherent until you join up all the different packets of information:
Behind the station; In the market square; Male or female? Not sure; Young or old? Unclear; So, what? Dead; How? Murder or natural causes? Unclear; When? Who knows? Who found the corpse? Dunno.

One day someone will produce an award-winning thesis to show why information that arises from close in is invariably more garbled than that which comes from a distance. In a more remote case I would have expected precise detail and a named informant and clear orders to investigate. Here, though, with the scene of crime less than five minutes’ stroll away, cops and staff simply turn their heads and stare at me. Pretty soon everyone including the tea lady has turned to look at the only homicide cop in the room on duty and available. I shrug and stand up, ready to do my duty: even if there was no foul play, in a case of sudden death you still need a murder cop to say so before anyone will believe it. Anyway, I’m as curious as everyone else. And, yes, it is easier to descend the emergency stairs to leave the building by the rear entrance and cross the
soi
to the market and ask the first vendor I see where the body is than to wait for some official order to investigate.

“Over in one of those shop houses in the corner behind the roti vendor.”

It is true there is a small crowd just behind the roti vendor, who is doing a brisk trade. Does the proximity of death give people a sweet tooth? We know about sex and death, but what about death and other appetites? About ten people are lining up to buy pancakes, which we call
rotis
thanks to our Hindu community, wrapped around bananas smeared in a Swiss chocolate spread, a culinary form long since mastered and perhaps even invented by the stall owner—and it is to these enhanced bananas in wheat-flour wrappings that the small crowd has resorted in its grief and confusion.

Okay, not grief and confusion: there’s nothing like sudden death-cum-murder to provide an excuse for a break, a chat, and a snack. There are no Thai bosses so insensitive that they would force people to work under such pressure of curiosity, for gossip is a force of nature no more deniable than gravity.

Do you detect a slightly frivolous mood on my part, Reader (I’ll call you R if you don’t mind)? Please do not label me and my people as callous, you see the common assumption at this moment is that the body, wherever it is, will be that of an older person, probably a male vagrant who drank too much rice whiskey and drowned in his own vomit, or a younger person not necessarily male who OD’d on
yaa baa
(crystal meth). I’m afraid it is incidents like that, rather than your great operatic homicides beloved of the media, that form the bread and butter of a murder squad’s humble servant such as I. Even the unexpected presence of a forensic team at the S of C does not faze me. They would have experienced the Big Rumor earlier than the rest of the station, for their laboratory is on the ground floor at the back: they would have felt the invisible pressure to stroll over quite a few minutes before me.

Now I see they have left one of their young gofers at the bottom of the three-story shop house, who greets me and jerks his head at the stairs. “Top floor,” he says, without calling me
sir.
I am sufficiently irritated by this insubordination, a more severe transgression in these parts than corruption, to give him a double take. He looks away. Once I have checked his face I think it was not insubordination; I think he forgot himself out of some kind of embarrassment or inhibition. His strangeness is sufficiently odd for me to check his face again as I set foot on the stair: he looks slightly scared and seriously embarrassed, as if I will find something personally compromising on the third floor. I put his attitude down to youth and stupidity. I am confident that if a murder were committed on the third floor it was nothing to do with me. I even have an alibi: I was at home with my wife all night.

At the top of the stairs forensics have placed another gofer, who also looks away as soon as he sees me, directing my attention to an open door where I glimpse a crime scene specialist in white coveralls squatting over something on the floor. It is A-Wut (Weapon), an old pal from way back. A glance into the room reveals more old pals: Channarong (Experienced Warrior) on the video camera and Khemkhaeng (The Strong) standing around. But I know them all too well to use their official forenames; intimacy built up over more than a decade requires and expects nicknames of cozy vulgarity (e.g., Damned Aye, Bloody Toei, and so on). I enter the room on tiptoe. When A-Wut, aka Effing Tam, catches sight of me he looks surprised, as if I am the last person he expected to come across right now; as if there is something important that he assumed someone would have told me already. He gives a quick look behind him, which seems to me somewhat furtive, then gestures for me to step farther into the apartment. At the far end Bloody Toei is standing in front of a mirror holding the video camera and panning monotonously across the crime scene with grim determination. There are also two women from forensics, who I’ve not met before although I’ve seen them around, and who are slouched against a wall, one stone-faced with a thousand-yard stare, the other softly and continuously weeping over something that lies between them

Their anguish possesses a mystic force that takes you back to the Fall: primal loss. So why is the team in two separate groups, with the women squatting against a wall and A-Wut, the leader, about ten feet away from them? A-Wut gestures for me to look first at what he is squatting over: a Thai girl laid on her back, probably about twelve or thirteen years old, still fully dressed in the blue-and-white costume of secondary school children and minus a head.

It is the head the two women are watching over on the other side of the room, the two body parts joined by a trail of what must have been spurting blood from a snapped jugular not too long ago: crimson and pink splashes, mists and sprays have penetrated everywhere, including the ceiling.

I am in shock, my professional reflexes reduced to idiot-level slowness. Only one thought emerges clear and strange: against all the rules of psychological profiling the face is undamaged. This is unnatural: terrorism aside, your deranged perp resorts to the extreme violence of decapitation because he must punish and destroy the Other who, as a projection of himself, he blames for everything that has gone wrong and will continue to go wrong in the tormented world he inhabits. Destruction of the face is basic. Here, though, the face is not only undamaged, it shows no sign of trauma at all. It is delicate, beautifully modeled, tan, big-eyed, slender-necked, innocent, like the golden head of an alabaster Buddha. A shudder convulses my body when I realize that the neck is so very slender—hardly more than an inch in diameter—because of elongation.
Someone pulled her head off with bare hands?
Isn’t that impossible?

Now I am throwing A-Wut a look of anguish—and still there is a reserve about him, a certain distance, almost as if he suspects me in some way. Then I realize the two women also are staring at me. Silence. The weeping has stopped, the women’s eyes shift to the far end of the room where Bloody Toei the video operator has moved to a corner and also is staring at me. When his eyes shift to the mirror I follow the cue and finally begin to understand:

Detective Sonchai Jitpleecheep, I know who [smudge] father is.

The words are written in blood in neat handwriting across the top of the mirror. What I have described as a
smudge
is an elongated spurt of blood between the words
who
and
father.

I am being hollowed out by something even more toxic to mental health than fear. I find my features pinching in some kind of caricature of righteous rage. A-Wut is no fool, he sees what is happening to me.

“Who…” My mind wanders, searching for an escape. I force it to return to the scene of the crime. “Who reported it?” I demand.

A-Wut puts an arm around me and squeezes hard. “That’s your job to find out, good buddy,” he says in a consoling tone. “We’re only forensics.”

“But…” I lose track, try again. “But somebody must have…”

“We came because of the rumor. Think about it, who in Bangkok is going to own up to being the first to see a corpse like that? If superstition doesn’t faze them, fear of law enforcement would have the same effect. No one wants to be associated with anything so extreme. Bad joss. Very, very bad joss. You know that.”

“Right,” I say, gulping and staring again at the mirror, all too aware that a great heap of very bad joss has landed on me also. “Right.” I fish out my phone to call Sergeant Ruamsantiah, who says he will detail half a dozen constables to start taking statements from the people in the market. For the moment I am unable to bring myself to tell him about the writing on the mirror. For the moment I cannot face the world, either. I wait downstairs for the Sergeant to arrive.

By the way, my name is Sonchai Jitpleecheep, Homicide Detective, attached to District 8 Police Station where one Colonel Vikorn presides, at your service.