Read The Bayou Trilogy: Under the Bright Lights, Muscle for the Wing, and The Ones You Do Online

The Bayou Trilogy: Under the Bright Lights, Muscle for the Wing, and The Ones You Do

BOOK: The Bayou Trilogy: Under the Bright Lights, Muscle for the Wing, and The Ones You Do
13.4Mb size Format: txt, pdf, ePub
Read Book Download Book
ads 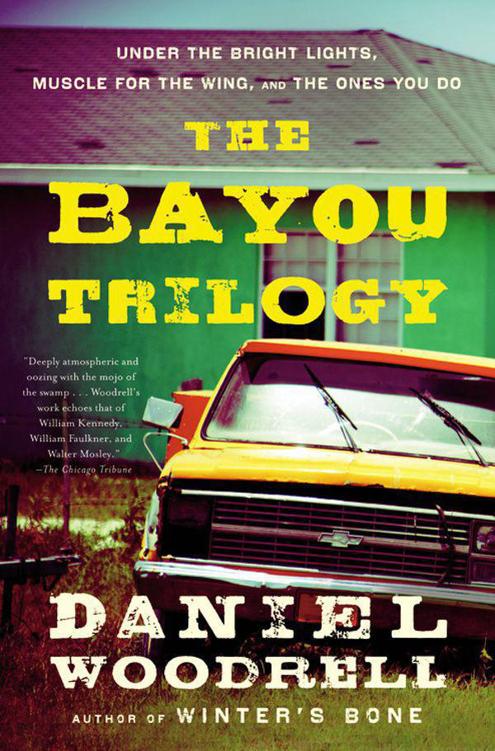 UNDER THE BRIGHT LIGHTS

MUSCLE FOR THE WING

THE ONES YOU DO

Under the Bright Lights

Muscle for the Wing

The Ones You Do

UNDER THE BRIGHT LIGHTS

To Katie, for all the reasons

“You can map out a fight plan or a life plan, but when the action starts, it may not go the way you planned, and you’re down to your reflexes—that means your [preparation]. That’s where your roadwork shows. If you cheated on that in the dark of the morning, well, you’re going to get found out now, under the bright lights.”

J
EWEL
C
OBB
had long been a legendary killer in his midnight reveries and now he’d come to the big town to prove that his upright version knew the same techniques and was just as cold. He sat on the lumpy green couch tapping his feet in time with a guitar he scratched at with sullen incompetence.

It was hard to play music in this room, he felt. There was a roof but it leaked, and great rusty stains spread down the corners of the apartment. The walls were hefty with a century’s accumulation of layered wallpaper bubbled into large humps in their centers. The pipe from the stove wobbled up to and through a rip in the ceiling where some industrious derelict had tried to do a patch job by nailing flattened beer cans over the gaps. It was altogether the sort of place that a man with serious money would not even enter, a man with pin money would not linger in, but a man with no money would have to call home. For a while.

After a few more slashing strums Jewel gave up on trying to bully a song from the flattop box. He shoved the guitar under the couch. He wore a stag-cut red shirt, shiny black slacks, and sharp-toed cowboy boots. His bare left bicep exposed the wet-ink blur of a cross with starlike points jail-tattooed into his pale skin. His long blond hair was combed up and greasy, sculpted into a style that had been the fashion at about the time of his birth. Jewel, however, had divined an image of himself in his nocturnal wonderings and the atavistic comb work was the key flourish in it.

He called to Suze again. “Well, get out of the john! And bring me a cup of coffee, hear?”

Maybe he should have left her back home, Jewel speculated. Let her dodge grease splatters at the Pork Tender Stand for the rest of her life. Give joy to pig farmers at drive-ins on Saturday night and wonder why she’d ever let Jewel Cobb slip away. That would be fitting. He was bringing her along in the world, taking her to Saint Bruno, a city where things can change, but was she grateful?

Not by a long sight. She’d rather paint each of her toenails a different color, or count the pigeons under the bridge, than learn how to cook him a decent meal. Lots of women knew things that she didn’t and he might not put up with just a whole lot more of her laziness before he picked up his walking cane and strolled out to pluck some daisies.

Ah, but he couldn’t leave her now. He’d come to Saint Bruno to change his life, dip a great big spoon into the fabled gravy train of the city, and if cousin Duncan hadn’t been greening him, then tonight could be the first little taste of how sweet that new life could be.

Jewel stood up and looked out the window onto Voltaire Street, a street of front-room appliance repair businesses, discount clothing shops, a pool hall called the Chalk & Stroke, a bail bondsman’s office, and two hair salons that promised summer cuts and granite perms.

“I let it cool for you, Jewel.” Suze’s voice entered the room before her loose-jointed shuffle that advertised her dissatisfaction with mundane physical processes. This body was meant for finer things, she seemed to mime, and fine things could happen with a body like that. She was still prey for pimples, and several smears of pink makeup marked the scenes of the latest attacks. Her hair was black and fell in a tangle past her shoulders, front and back, the longer strands flirting with the deep neckline of her floral-print, showtime summer dress.

She sat the cup on the arm of the couch. “Most like it hot. You must’ve bit a nerve in your mouth when you was drunk or something. It’s just the other way about with you.”

“I like to drink it, darlin’ girl, not sip it. Not slurp around at it like my teeth was loose and I can’t wander too far from the front porch rocker no more.”

“Some folks put ice in it. Like a Coke.”

“No kiddin’,” Jewel said. “I think I’ve heard of that. Must’ve saw it on Walter Cronkite.”

Suze’s shoulders slumped beyond their normal depth. “You shouldn’t make fun of me,” she said. “Everybody makes fun of me.”

“Hmm,” Jewel grunted, raising the cup of coffee and draining it in one long pull. But then he remembered Duncan.

Suze smirked at him, her hands on her hips in the pose of a barn-dance coquette. “You got the nerve, hillbilly?”

“It’s about quarter past eight.”

Jewel glanced out to the street where the buildings blocked what was left of the sun, giving an extra dose of gloom to the scene.

“That about makes it time,” he said as he walked to the dresser that buttressed the far wall. He opened the top drawer and raised a short, evil-looking knife with a bumble-bee-striped handle and stuck it, sheath and all, into his rear pocket. “You know my business?”

“It’s got to do with Duncan, I would guess.”

“Well, you can’t know that. Forget you do. It’s not something you can know.”

He started dealing through the few rags in the drawer until he came to a red towel that was wadded in a ball. When the towel was unwadded he lifted a .32 Beretta from it and holstered it inside his waistband. He pulled the tails of his shirt out and let them dangle.

“Oh, fudge,” Suze said. “I see it’s still going to be
that
kind of business.”

Jewel shrugged, then started toward the door.

Jewel was to wait for Duncan on the corner of Napoleon and Voltaire, so he stepped into the Chalk & Stroke and bought a couple of bags of Kitty Clover potato chips and a six-pack of tall-boys. He would, given the choice, rather eat potato chips than steak, and since there was rarely such a choice to ponder, he pretty well lived on Kitty Clover.

He stood inside a phone booth and opened a beer, then began to eat the chips. The street was now awake, busy with people going toward taverns and others staggering home, all of whom avoided the younger denizens, bare-chested in satin jackets, who kicked down the streets waiting for something funny to happen at which they could snort and guffaw, or for something mean to pop up so they could prove meaner and stomp it down. If boredom gave way only to more boredom then, perhaps, they would take it upon themselves to borrow something shiny and custom upholstered in which to escape that chronic state.

No one paid any attention to Jewel Cobb.

Duncan was just on time. He pulled up in a long blue Mercury that was past its prime but still flashy enough for a Willow Creek boy to take horn-honking pride in.

Jewel slid in on the passenger’s side.

Duncan regarded his younger cousin with some disdain. The boy was country tough, but hillbilly tacky. That shirt was an open admission to cops, citizens, and marks—watch out, I’m trouble.

“You settled right in the middle of it,” Duncan said as he pulled into traffic, heading north on the cobblestone street. “Frogtown.”

“The price is right.”

Duncan was in his late twenties with a neatly molded pot belly and thick, strong arms. There was a placid quality about his pale, sagging features that the ambitious glint of his green eyes served to counterpoint. His clothes were simple: open-necked blue knit shirt, a cream sports jacket, and gray slacks. His wheat-straw hair was cut short but not freakishly so. By careful design there was very little that would cause him to be remembered in a crowd of three or more.

“It’s called Frogtown,” Duncan said, “because it was French folks who settled it. Run into lots of Frogs hereabouts.”

Jewel had gorged on the chips and swallowed most of the beer. He finished it, stuffed the empty under the seat, and opened another.

“I can’t say I know. They seem to like water, swamps, and such like. I don’t know. It’s a saying, like coon, you see? Maybe like redneck.” He caught Jewel’s eye. “You don’t call ’em Frogs to their face, though. If you ain’t one, too. You see, it’s not as bad as nigger, but it’s not good.”

As they traveled, they left the close-in, crowded jumble of buildings and entered an area that was more spacious but no less grim. The river was in sight, a huge presence to the east, and trailers and wooden houses on stilts were flopped as near to the water as possible. They had come only four blocks but it could have been miles.

“This looks like Willow Creek, only with water instead of rocks,” Jewel said.

“Only it ain’t. And the people in them places ain’t Willow Creek kind of folks.”

They passed under a railroad bridge as the light faded into dark. Once beyond the bridge Duncan began to count the slim dirt lanes. At the third he turned toward the water. On either side of the lane was a tangled, belching, smelly swamp. Soon a yellow light was seen, then another light that bounced on the water from a dock.

“That’s it,” Duncan said. He turned off the car and headlights, then faced Jewel. “Now leave the beer here. Pete Ledoux, he’s a grown man and won’t go for that joyriding style of yours. If I had to bet, that’s what I’d bet, anyway.”

“I’d rather camp under the outhouse than fuck with Pete Ledoux, boy. You keep that attitude, Jewel. You keep it.” Duncan sighed, a troubled man. “If you wasn’t kin I’d deal you out right now.”

“Then act like you deserve the chance to get it. Opportunity’s
knockin’ on your thick skull, boy. This ain’t the annual Willow Creek–Mountain Grove dustup, Jewel. We’re fixin’ to tree a fella and tack his hide on the side of the barn. There’s folks that won’t like that, don’t you know? You can’t be lousin’ it up.”

BOOK: The Bayou Trilogy: Under the Bright Lights, Muscle for the Wing, and The Ones You Do
13.4Mb size Format: txt, pdf, ePub
Read Book Download Book
ads

MIRACLE ON KAIMOTU ISLAND/ALWAYS THE HERO by MARION LENNOX
Immortal Stories: Eve by Gene Doucette
Christmas Romance (The Best Christmas Romance of 2016): The Love List Christmas by Bates, Natalie-Nicole, Kleve, Sharon, Conner, Jennifer, Ford, Angela
My Girl by Stormy Glenn
Rev It Up by Julie Ann Walker
Now You See Me by Sharon Bolton
Havisham: A Novel by Ronald Frame
Star Spangled Murder by Meier, Leslie
The Forever Man: A Near-Future Thriller by Pierre Ouellette
Like a Cat in Heat by Lilith T. Bell