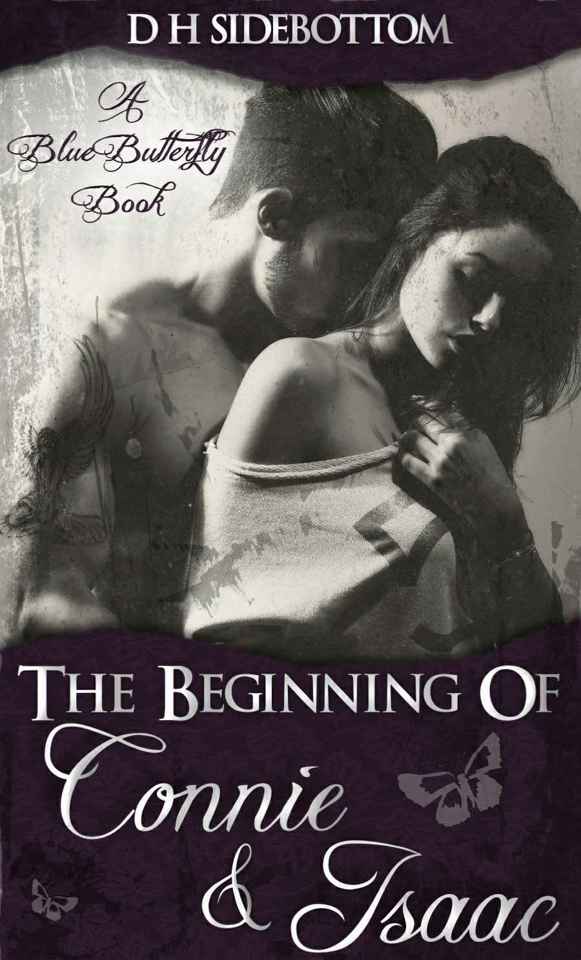 The Beginning of Connie & Isaac

This book is a work of fiction and any resemblance to actual places, incidents and persons, living or dead, is purely coincidental.

Copyright © 2015 D H Sidebottom. Please do not copy, alter or redistribute this book.

Excerpts from
The Temptation of Annie
and
My Diary by Mason Fox
, Copyright © 2015 D H Sidebottom.

Please secure author’s permission before sharing any extracts of this book.

Sneak peek of The Temptation of Annie

The Temptation of Annie - Prologue

My Diary By Mason Fox

PULLING MY COAT
farther around me, I turned up the heating dial, shivering against the ice that formed on the inside of the car window, never mind the outside. The music coming from the speakers was quiet and I wanted nothing more than to blast it higher to drown out my thoughts.

I tapped the steering wheel to the beat, shifting my glance to the upstairs window of the house I was watching. Light still glowed from behind the thin curtains, the shadow of a figure moving around behind them.

I needed to wait until they were asleep, to make this easier. For some reason, amongst others, this job felt different. I couldn’t put my finger on it. Although the targets didn’t sit well with me, it wasn’t just that that grieved me. Yet here I sat, waiting to do what I did best.

The shadow in the window appeared to be dancing. I smiled, watching the figure move to what I presumed to be an upbeat tune. The way her hand rested to her mouth, I knew she held a hairbrush, singing for her life.

I grabbed my ringing phone from the passenger seat beside me, rolling my eyes at the number displayed on the screen.

“Hey. You back tonight? The place is flooded with pussy, man. Your father’s decided to hold a party for some unknown reason.”

I couldn’t hold back the growl. I knew the exact reason for his party. “No. I’m out.”

“What?” Joel scoffed. “Pussy, Isaac. Lots and lots of glorious pussy. What the hell’s wrong with you?”

I rubbed at my face, suddenly tired. My eyes flicked back to the house and I sighed. “I dunno. It’s this fucking job. Doesn’t feel right.”

“Since when did you develop a conscience?” he mumbled, but I knew he understood.

“Since I got sent to do the dirty jobs.”

“What the fuck?” I spat, my lip curling in disgust. “Thirteen, Joel.
Thir-teen
!”

“Fresh pussy.” I stared, gobsmacked, at the pattern the ice had formed on the window, tracing the developing web with my gaze as Joel jabbered on. “And hell, if I know girls nowadays, you might not even be their first.”

“You sick fuck.” I shook my head, wondering what the hell I saw in Joel as a friend. “You’re gonna regret saying that when I get back.”

“Yeah? Go fuck her then. She’ll more than oblige.” I ended the call, throwing my phone back on the seat.

Glancing back at the house, I murmured a groan when I saw the upper light extinguish. “Fuck!”

I climbed from the car, looking around to make sure I wasn’t being watched, and walked around the back of the house. I scaled the high gate and dropped to the ground on the other side, my feet skidding slightly on the frosty ground. My brow quirked at the large fountain standing proud in the centre of the garden, masses of bushes doing half my job for me and blocking me from neighbours’ eyes.

My feet dragged along the floor, my heart someplace else. Shit, they were teenage girls. This was never right. What the fuck was my father playing at? I knew he was an evil bastard, but hell, kids? He’d recently started to take kids in, training them into Phantoms, but I’d never been given an order to kill any. And even worse, who the hell had given the order? Which depraved fuck relished in the slaughter of a child?

I traced the length of the wire from the alarm system then slipped the blade from my pocket and severed the line before picking up a stone from beside the door. A key hidden underneath mocked me, making me slightly disappointed with how easy this was. Christ! Did this family have no regard for security? Especially leaving their teenage daughters home alone for the night. Someone, anyone, could break in. I couldn’t help the small tilt of my lips at my humour.

It was dark inside, the door leading into a large square kitchen that was only lit by a small ray of moonlight slipping between the blinds. I didn’t bother to observe anything; there was no point, and this should be easy enough. I didn’t need to be aware of available exits, or objects that may be needed in the loss of my weapons.

I moved silently through the hallway that led off the kitchen then placed a foot on the bottom step to go up to the bedroom. A noise from a slightly open door on the left stilled me, my eyes narrowing and my head tilting as I listened harder.

“I’ve told you no, Lee. I’m not doing it.” Her soft voice seemed to curl inside me. The unique pitch was soothing, even though she sounded frustrated. “She’s my sister, and even I’m not that cruel.”

I walked silently to the door and pushed it open a little more. She sat on a couch, bent over, painting her toenails a sickly red as she held a phone to her ear. Her long black hair fell in front of her face, hiding me from her view as she slid the brush slowly up each nail, dipping it into the pot occasionally to recoat it.

She giggled into the phone. “No,” she breathed, her soft whisper making me wince at how it made me feel. My brow lifted at her obvious flirting. The sound of her laughter made me smile slightly. She was so contrary, flirting one second then giggling like a small child the next. This girl had no idea of the affect she had over boys, but she would find that seduction and teasing are two different things and would one day get her into trouble. Then again, after tonight she’d never… yeah.

Whisper in the Dark (A Thriller) by Robert Gregory Browne
Sing by Vivi Greene
All Jacked Up by James, Lorelei
Louder Than Love by Topper, Jessica
Covering Home by Heidi McCahan
All Mine by Jesse Joren
Street Fair by Cook, Jeffrey, Perkins, Katherine
The Slayer (Untamed Hearts #2) by Kele Moon
’Til the World Ends by Julie Kagawa, Ann Aguirre, Karen Duvall
The Birth of the Pill: How Four Crusaders Reinvented Sex and Launched a Revolution by Jonathan Eig