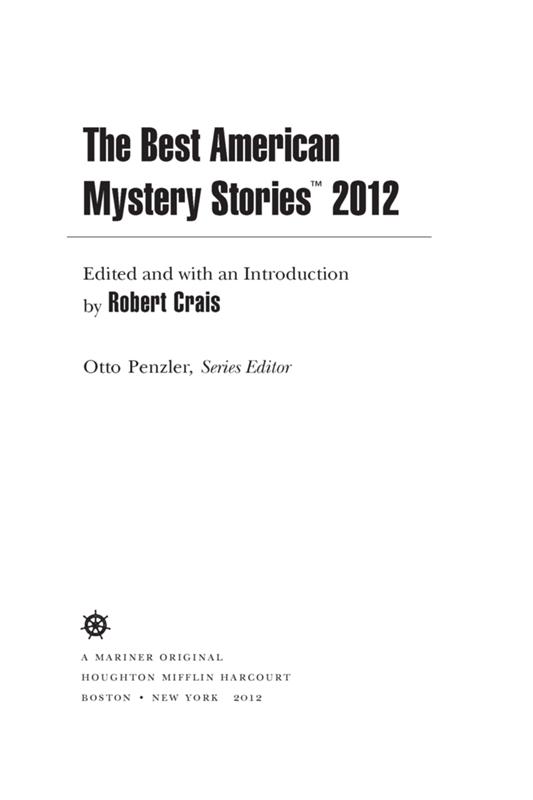 KATHLEEN FORD
Man on the Run

MARY GAITSKILL
The Other Place

GINA PAOLI
Dog on a Cow

Other Distinguished Mystery Stories of 2011

These stories are works of fiction. Names, characters, places, and incidents are products of the authors' imagination or are used fictitiously. Any resemblance to actual events, locales, or persons, living or dead, is entirely coincidental.

“The Hit” by Tom Andes. First published in
Xavier Review,
Vol. 31, No. 1. Copyright Â© 2011 by Thomas Andes. Reprinted by permission of the author.

H
AVING WRITTEN AND SPOKEN
about mystery fiction frequently (some ungenerous soul might say ad nauseam) through the years, I have maintained that one of its appeals is that it is a literary presentation of a fundamental life force: a battle between those who value Good in opposition to the spear carriers of Evil.

Ruminating on it recently, however, I came to think this may be less true at this time than it was when I first became interested in crime fiction. As character and psychological elements of a story have transcended plots and clues, as the reason
why
a murder was committed has transcended the question of
who
committed it or
how
it was done, it seems to be that the two omnipresent factors in contemporary crime fiction are Death and Sin.

Death appears to provide the minds of readers with a greater fund of innocent amusement than any other single subject except love, but of course in crime fiction they are not mutually exclusive components of a novel or short story. Furthermore, when Death is accompanied by Sin in its most repugnant shapes, the fun increases exponentially. Some readers prefer the intellectual cheerfulness of a detective story while others have a taste that runs more to noir fiction, but in either case the story generally requires at least one dead body and at least one very wicked person for it to provide that frisson of pleasure that may be had while viewing horrible events from a safe distance.

Here, then, in the sixteenth volume in this distinguished series, is a collection of stories nearly all of which are about Death and Sin, with plenty of dead bodies and an abundance of wicked people. They are designed, albeit unconsciously on the most part, to make you feel that it's good to be alive and, while alive, on the whole, to be good.

It should be noted, in a parenthetical aside, that mystery writers are, with (truly) few exceptions, good. It is fundamental to their jobs to be aware of the fact that your sins will be discovered, no matter how clever you think you are. This is why, it should be further noted, mystery fiction is such a good influence in an increasingly degenerate world, and why it is so popular with academics, lawyers, politicians, and others who have reputations to protect; reading mysteries improves their morals and keeps them out of excessive mischief.

While it is redundant for me to write it again, since I have done it in each of the previous fifteen volumes of this series, I recognize the lamentable fact that not everyone has read every one of those books, nor memorized the introductory remarks, so it falls into the category of fair warning to state that many people regard a “mystery” only as a detective story. I regard the detective story as one subgenre of a much bigger genre, which I define as any work of fiction in which a crime, or the threat of a crime, is central to the theme or the plot. While I love good puzzles and tales of pure ratiocination, few of these are written today, as the mystery genre has evolved (or devolved, depending on your point of view) into a more character-driven form of literature, as noted previously. The line between mystery fiction and general fiction has become more and more blurred in recent years, producing fewer memorable detective stories but more significant literature. It has been my goal in this series to recognize that fact and to reflect it between these covers. The best writing makes it into the book. Fame, friendship, original venue, reputation, subjectânone of it matters. It isn't only the qualification of being the best writer that will earn a place in the table of contents; it also must be the best story.

As frequent readers of this series are aware, each annual volume would, I am convinced, require three years to compile were it not for the uncanny ability of my colleague, Michele Slung, to read, absorb, and evaluate thousands of pages in what appears to be a nanosecond. After culling the nonmysteries, as well as those crime stories perpetrated by writers who may want to consider careers in carpentry or knitting instead of wasting valuable trees for their efforts, I read stacks of them, finally settling on the fifty bestâor at least my fifty favoritesâwhich are then passed on to the guest editor, who this year is the creator of Elvis Cole and Joe Pike, Robert Crais. Coincidentally, but generously, he began writing the introduction to this volume on the same weekend that his most recent novel,
Taken,
hit the number-one spot on the
New York Times
bestseller list.

While Michele and I engage in a relentless quest to locate and read every mystery/crime/suspense story published, I live in fear that we will miss a worthy one, so if you are an author, editor or publisher, or care about one, please feel free to send a book, magazine, or tearsheet to me c/o The Mysterious Bookshop, 58 Warren Street, New York, NY 10007. If the story first appeared electronically, you must submit a hard copy. It is vital to include the author's contact information. No unpublished material will be considered, for what should be obvious reasons. No material will be returned. If you distrust the postal service, enclose a self-addressed, stamped postcard.

To be eligible, a story must have been written by an American or a Canadian and first issued in an American or Canadian publication in the calendar year 2012 with a 2012 publication date. The earlier in the year I receive the story, the more fondly I regard it. For reasons known only to the blockheads who wait until Christmas week to submit a story published the previous spring, holding eligible stories for months before submitting them occurs every year, which causes much gnashing of teeth while I read a stack of stories as my wife and friends are trimming the Christmas tree or otherwise celebrating the holiday season. It had better be a damned good story if you do this. Because of the very tight production schedule for this book, the absolute deadline is December 31. If the story arrives one day later, it will not be read. Sorry.

The Eighth Trumpet (The Jared Kimberlain Novels) by Jon Land
Get Wallace! by Alexander Wilson
The Square of Revenge by Pieter Aspe
The Storms of War by Kate Williams
Deceived by Stephanie Nelson
Wilderness by Roddy Doyle
The Carrier by Sophie Hannah
Totally Fishy (A Miller Sisters Mystery) by Borger, Gale
Perfect Ruin by Lauren DeStefano
Lifeforce by Colin Wilson