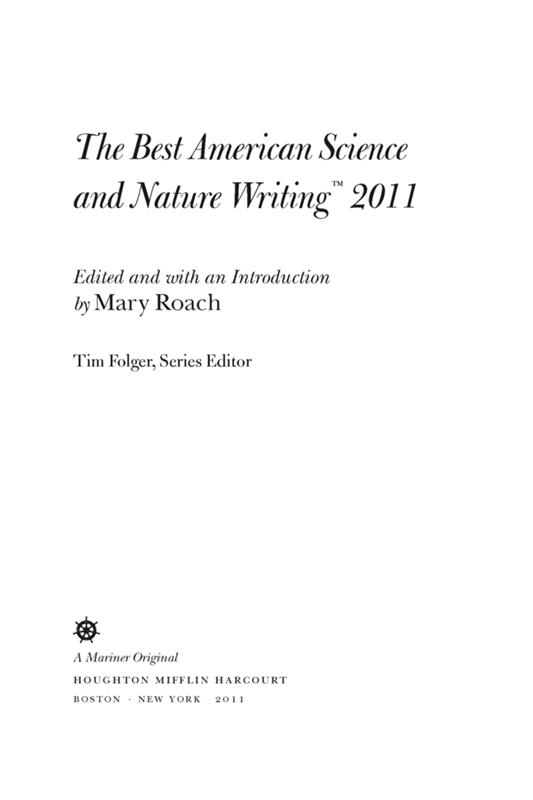 The Brain That Changed Everything

Fish Out of Water

The (Elusive) Theory of Everything

The First Church of Robotics

The Love That Dare Not Squawk Its Name

The New King of the Sea

The Killer in the Pool

Other Notable Science and Nature Writing of 2010

No part of this work may be reproduced or transmitted in any form or by any means,
electronic or mechanical, including photocopying and recording, or by any information
storage or retrieval system without the prior written permission of the copyright
owner unless such copying is expressly permitted by federal copyright law.
With the exception of nonprofit transcription in Braille, Houghton Mifflin Harcourt
is not authorized to grant permission for further uses of copyrighted selections
reprinted in this book without the permission of their owners. Permission
must be obtained from the individual copyright owners identified herein. Address
requests for permission to make copies of Houghton Mifflin Harcourt material to
Permissions, Houghton Mifflin Harcourt Publishing Company, 215 Park Avenue
South, New York, New York 10003.

"Fertility Rites" by Jon Cohen. First published in
The Atlantic,
October 2010.
Adapted from
Almost Chimpanzee: Searching for What Makes Us Human in Rainforests,
Labs, Sanctuaries, and Zoos
by Jon Cohen. Copyright Â© 2010 by Jon Cohen. Reprinted
by permission of Henry Holt and Company, LLC.

"Fish Out of Water" by Ian Frazier. First published in
The New Yorker,
October 25,
2010. Copyright Â© 2010 by Ian Frazier. Reprinted by permission of The Wylie
Agency, LLC.

"The (Elusive) Theory of Everything" by Stephen Hawking and Leonard Mlodi-
now. First published in
Scientific American,
October 2010. Reprinted by permission
of the authors.

"The Love That Dare Not Squawk Its Name" by Jon Mooallem. First published in
the
New York Times Magazine,
March 31, 2010. Copyright Â© 2010 by Jon Mooallem.
Reprinted by permission of the author.

O
NE DAY LAST
February a team of NASA scientists made an astonishing announcement. A space telescope named Kepler, launched in March 2009, had found 1,235 planets orbiting other stars. Astronomers cautioned that they would need years to confirm the discovery completely, but there's little doubt that most of the new planets will survive scrutiny. In one stroke the number of planets in our galaxy more than doubled; as recently as twenty years ago the only known planets were those in our own solar system. For the first time in history we now know that planetary systems are common in the universe, which raises considerably the odds that lifeâperhaps even intelligent lifeâmay exist elsewhere in the cosmos. Geoff Marcy, an astronomer on the Kepler team, could barely contain his excitement.

"It really is a historic moment," he told me during a chat in his office on the University of California campus in Berkeley. "I really think February 3, 2011"âthe date NASA released the newsâ"will be remembered for a long time. It was a moment when all the interested members of our species, no matter what continent they lived on, realized that the Milky Way galaxy is just teeming with Earth-size planets. What Kepler is doing is literally finding new worldsânot metaphorical worlds, but actual worlds. This really is an extraordinary new chapter in human history."

The new chapterâone of the great discoveries of the agesâmade headlines for a day, and then ... our collective attention moved on. The Super Bowl was only a few days away; protesters were massing in Cairo's Tahrir Square. A thousand new worlds, some of which might be habitable? Yesterday's news. It made me wonder what cultural life might have been like, say, in Galileo's time, if Renaissance Italy had been plagued by a twenty-four-hour news cycle. Would endlessly recycled rumors of a papal scandal have eclipsed Galileo's discovery of the moons of Jupiter in 1610? Or maybe a hit reality stage showâ
Growing Up Medici
âwould have so distracted officials of the Inquisition that they wouldn't have cared when Galileo claimed that Earth orbited the sun, and the old man would have been spared his sentence of lifetime house arrest.

So give the Inquisitors some credit. They tortured; they burned; they broke willsâbut they knew a turning point in history when they saw one, even if they did their best to suppress it. They must have thought they were doing the right thing. Maybe they even imagined that future generations would be grateful for their efforts. But who now remembers the name of the pope who reigned when Galileo was imprisoned? (It was Paul V, but I had to look it up.) Four hundred years from now, if our species survives, it's probably safe to assume that the wars of our timeânot to mention our leaders and celebritiesâwill be forgotten. The year 2011 may well be remembered as the time when we learned that our world was but one of many in the galaxy. And who knows? In another four centuries we may have found that we're not alone in the universe.

Although astronomers don't yet know whether any of the planets discovered by the Kepler space telescope harbor life, there's good evidence that the raw ingredients for life are as common as space dust. One of the articles in this year's anthology, "Cosmic Blueprint of Life," by Andrew Grant, informs us that some of the complex organic molecules that are essential for life apparently form spontaneously in interstellar space. These compounds may have been the seeds from which life on Earth beganâand if it happened here...

After pondering the question of life's beginnings, you might want to consider a provocative meditation on the nature of reality presented by Stephen Hawking and Leonard Mlodinow in "The (Elusive) Theory of Everything." In just two mind-bending pages they make a compelling case that physicists will never develop an overarching "theory of everything." The universe, they argue, is too complex ever to be tamed by any single theory, no matter how elegant. I don't know what the Inquisitors would have thought about this, but I think house arrest would be the best that Hawking and Mlodinow could hope for.

As exciting as it would be to find evidence of life on other worlds, our own planet abounds with strangeâand disturbingâexamples of the often savage forms life can take. Jill Sisson Quinn's transcendent "Sign Here If You Exist" challenges us to consider what we can learn about the nature of reality, the existence of God, and our notions of immortality from the fierce ichneumon wasp. It's an unforgettable story.

And there are many others in this collection, from Tim Zimmermann's gripping account of a fatal encounter with a killer whale at a marine park to Christopher Ketcham's surprising "New Dog in Town," in which we learn that the resurgence of a certain wily predator may be a sign that something is seriously wrong with wildlife habitat in North America. Mary Roach will tell you more about these and other stories in the pages ahead, and you would be hard-pressed to find a wittier, more knowledgeable guide to the world of science and nature writing in this corner of the Milky Way.

I hope that readers, writers, and editors will nominate their favorite articles for next year's anthology at
http://timfolger.net/fo-rums
. The criteria for submissions and deadlines, and the address to which entries should be sent, can be found in the "news and announcements" forum on my website. Once again this year I'm offering an incentive to enlist readers to scour the nation in search of good science and nature writing: send me an article that I haven't found, and if the article makes it into the anthology, I'll mail you a free copy of next year's edition. I'll sign it, and so will Mary. Right, Mary? I also encourage readers to use the forums to leave feedback about the collection and to discuss all things scientific. The best way for publications to guarantee that their articles are considered for inclusion in the anthology is to place me on their subscription list, using the address posted in the news and announcements section of the forums.