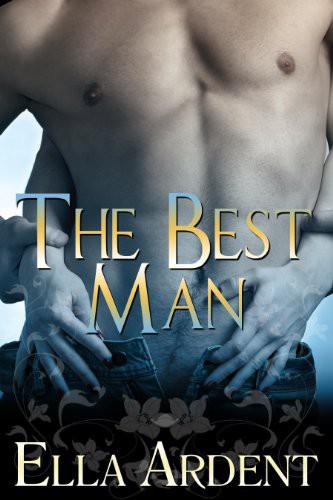 You are invited to a
wedding...

• where a mysterious lover fulfills a secret
fantasy - and finds his own dream come true.

• where a disappointed woman finds true love - in
the most unlikely of places.

• where the bride and groom have second thoughts -
but discover a happy-ever-after beyond their wildest dreams.

Christine has always been in love with her best
friend’s older brother, Jake. The fact that she’s maid of honor and he’s best
man at Jess’s Caribbean wedding means that they’ll be thrown together
repeatedly for the week of the festivities. Christine decides to make it count
and tells Jake about her secret desire, hoping he’ll realize that he’s the
fantasy lover she really wants. Jake has always wanted Christine to be more
than his ‘other baby sister’ but doesn’t want to lose her friendship. When Christine
confesses her secret desire, he appoints himself to make her fantasy come true.
His only concern is the bet made at the stag, that whichever of the guys gets
lucky first wins the money. Jake knows that winning the bet could mean losing
Christine—fortunately, he’s a man willing to be creative in pursuit of
the best prize of all.

The Best Man by Ella Ardent

The distribution of this work without the express
permission of the author is illegal and punishable by law. Please purchase only
authorized electronic editions, and do not participate in or encourage
electronic piracy of copyrighted materials. Your support of the author’s rights
is appreciated.

As
much as Christine loved to travel and as much as she was in need of a vacation,
she wasn’t really looking forward to this trip.

Weddings
were starting to feel less than celebratory.

Christine
was happy for her best friend, Jessica, and honored to be Jessica’s maid of
honor. She thought it was wonderful that Jessica would be marrying the love of
her life on a beach in the Caribbean surrounded by friends and family. It would
be a beautiful ceremony, Christine knew it.

The
problem was that weddings just made Christine more aware of her own solitude.
That it was her best friend who would be happy forever just reinforced the
improbability of Christine’s situation ever changing. She was going to be faced
with that truth at every turn on this trip.

Because
the only man Christine wanted was Jessica’s big brother, Jake.

And
he would be best man.

Being
madly in love with Jake was something Christine could usually push to the back
of her thoughts – except when she saw Jake, and on this trip, she’d see
him all the time. Christine had known Jake all her life and had adored him for pretty
much the same amount of time. She knew Jake wasn’t perfect, but he had every
quality she admired. He was handsome. He worked out. He was smart and had a
good sense of humor. He could be kind and he could be tough, depending on the
circumstances. He was scrupulously fair. He had a great job and a promising
career.

And
he was convinced that he and Christine were just friends.

In
fact, he jokingly called her his ‘other baby sister’.

He’d
introduced his sister to Ryan: because he’d set this marriage in motion, so he
was Ryan’s best man. Christine was torn between being excited that she’d be
thrown together with Jake at this wedding, given their respective roles, and
dreading the chance of making an ass of herself—under the influence of alcohol—spilling
her secret, and losing Jake’s friendship for all time.

Being
friends was better than nothing.

That
must have been why Christine hadn’t slept. She was up when it was still dark, so
early for the charter flight that the coffee shops at the airport weren’t even
open. She got through the security line and took a seat in the lounge at the
gate. She pulled out her phone and double-checked her messages. For all she
knew, she wouldn’t get service on the islands and she wanted to make sure that
everything would run smoothly while she was gone.

Naturally,
despite her planning, she was right in the middle of a big job, one that could
make her career and which had stretched out beyond deadline. It was a crappy
time to be going away, but she’d promised Jess.

Christine
was vaguely aware of a trio of guys arriving in the lounge. They were loud and
good-looking, maybe friends of Ryan’s. They looked as if they’d come straight
from a party, and one of them was checking her out. Christine focused on
getting through her messages. Someone sat down beside her and she assumed it
was one of the guys. She had time to be irritated by his presumption before he
spoke.

“So,
are you the special of the day?”

Christine
jumped at the familiar sound of Jake’s voice. She glanced up to catch his
mischievous smile, then he leaned back in the seat beside her. He could have
been a big cat stretching, a lean hunk of a big cat, and she stole a good look.
His thigh bumped against hers, making her pulse leap, but she knew he hadn’t
done it on purpose.

He
probably wasn’t even aware that he’d set her heart racing.

Jake’s
auburn hair was a little longer than usual and unruly. It looked as if he’d
shoved his hands through it a couple of times, and she smiled to see that he
hadn’t shaved. That was different. She was pretty sure she’d never seen him in
public with a day’s growth of beard.

The
sight made her tingle a little, as if the usual rules had been put aside.

As
if there were more possibilities open.

What
about the one she wanted most?

Jake
dumped his bag by his feet and pulled out his own phone, then caught her looking
and grinned. “Don’t look so surprised. I knew you’d be here. We’re always the
first to arrive.”

Christine
smiled. “That’s how we always end up making breakfast for everyone at the
cottage.”

“Or
at least coffee. I’d kill for a coffee right now.” He looked at the closest
coffee bar and grimaced that it still wasn’t open.

Christine
remembered then that the stag had been the night before. “Did you sleep?”

He
rolled his eyes. “The stag was endless. Nipples everywhere.”

Christine
laughed despite herself. “You don’t sound impressed.” She knew she had to tease
him. “Don’t go telling me that you’re gay.”

Jake
chuckled at that. “Hardly. Strippers just aren’t my thing.” He shot her a glance
so quickly that she was caught by surprise. “I like women, but would rather
know the whole woman than just rate her individual parts.”

“I
knew you were old-fashioned,” Christine said, trying to keep her tone light.

“Good.”
He said the one word so fast and low that Christine wondered if she was
imagining his intensity. “Glad to see I’m not the only one who missed out on a
coffee this morning,” he murmured, then scrolled through his messages. He
winced. “Oh, I’m going to pay for this vacation in overtime.”

“Me,
too.” Christine remembered his question a bit late.

“Here’s
hoping they actually make it to the altar.”

Christine
caught her breath, glad she wasn’t the only one who had noticed the friction in
Jess and Ryan’s relationship. “I’m sure it’s just nerves,” she said and Jake
shrugged, seeming unconvinced. The conversation stalled, both of them
uncomfortable with the idea of Jess being unhappy, and she remembered his
earlier comment. “What did you mean, special of the day?”

To
her relief, the question restored his good mood. He smiled at her. “Those guys
are looking like they’d like to have you for breakfast. Are you ignoring them
or unaware of them?”

Christine
wrinkled her nose. “Door number one, but wishing for door number two.”

Jake
smiled. “I don’t blame you.” His gaze turned warmer as he looked at her.
“Although you do look delicious. You really work that retro movie star vibe,
don’t you?”

Christine
found herself blushing. Was Jake actually checking her out—and liking
what he saw? Maybe she was dreaming this early in the day.

On
the other hand, it was pretty exciting to think of Jake having her for
breakfast. What would he think if she offered? Christine couldn’t bring herself
to do it—but she felt herself blushing more at the thought. She felt more
self conscious than usual in Jake’s presence, which was saying something. “I
just hope they’re not going to the same resort as we are.”

“Why?”
Jake’s tone was carefully neutral and he kept his gaze fixed on his phone.
“Aren’t you looking for some vacation action? I thought that was what all the
bridesmaids were planning.”

“Just
Fiona.” Christine shook her head. “But then, you know how she is.”

“No,
I don’t.” Jake spoke so firmly that she looked up.

“How
can you not have noticed? She practically stalks you.”

Jake
grimaced. “I’ve noticed, I just don’t want to know. Kind of like you and the
wolf pack there.”

Now
it was Christine’s turn to smile.

Jake’s
next words stole her smile away, though. “Those guys are Ryan’s buddies from
college. The dark-haired one is Mark. You could think of him as a male Fiona.”

“Thanks
for the warning.” Christine glanced at the guys and the dark-haired one who
must be Mark winked at her. She got interested in her cell phone and Jake made
a clucking sound under his breath.

“You
could just tell him where to go, but you stink at not being nice.”

“Takes
one to know one?” Christine retorted and Jake laughed again.

Christine
swatted him and he laughed louder—like the big brother he might as well
have been. He looked so sexy and vital that Christine’s thoughts were far from
those she should have for a brother. All she wanted to do was jump Jake’s
bones—there was her vacation fantasy!—but if she told him, he’d
probably tousle her hair like she was six years old and tease her about it.

“Maybe.”
He winked at her again, his playfulness messing with her composure. “Maybe
we’ll get lucky and they’ll all keep Fiona busy.”

“We
can hope.” Christine’s low comment seemed to amuse Jake. She had a sudden idea
of how she could avoid the guys with Jake’s help.

Did
she dare suggest it?

Jake
leaned back, surveying her, and something changed in his expression. Christine
swallowed and pretended not to notice. “So, tell me. What do you want from your
vacation, if not wild sex with strangers? What’s your ideal in terms of getting
away from it all?”

“I
want a tan,” Christine said firmly, distrusting how his eyes twinkled.

“A
tan is worth working overtime for three weeks when you get home?”

“Lots
of time scuba diving.” Jake clicked through his text messages. Christine had
the sense that he was pretending to be more interested in them than he was. She
already knew that he was observant. “So, you have no romantic fantasies set on
tropical beaches?”

He
didn’t sound like he was making fun of the idea, so Christine admitted her
weakness before she thought to do otherwise. “Maybe just one.”

Jake
looked up then, his gaze bright. “Excellent! Tell me.”

He
leaned closer. “Why not?”

“Because
you’ll use the information against me. I know how you are.”