The Best of Kristina Wright 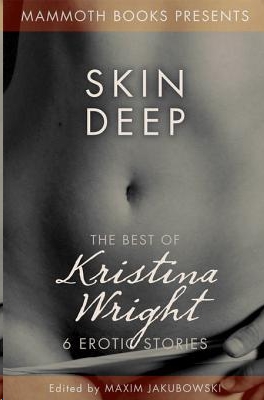 First published in the UK by Robinson,

The right of Kristina Wright to be identified as the author of this
work has been asserted by her in accordance with the
Copyright, Designs and Patents Act 1988

At Midnight, In the Month of June

The Stars Fell Down

“The Dress” © Kristina Wright, 2009. First published in
Rubber Sex
, edited by Rachel Kramer Bussel. Reprinted in
The Mammoth Book of Best New Erotica 9
, edited by Maxim Jakubowski (Robinson, 2010), by permission of the author.

“In the Stacks” © Kristina Wright, 2004. First published in
Master/Slave
, edited by N. T. Morley. Reprinted in
The Mammoth Book of Best New Erotica 5
, edited by Maxim Jakubowski (Robinson, 2006), by permission of the author.

“At Midnight, in the Month of June” © Kristina Wright, 2005. First published in
Clean Sheets
. Reprinted in
The Mammoth Book of Best New Erotica 6
, edited by Maxim Jakubowski (Robinson, 2007), by permission of the author.

“The Stars Fell Down” © Kristina Wright, 2006. First published in
Caught Looking
, edited by Alison Tyler and Rachel Kramer Bussel. Reprinted in
The Mammoth Book of Best New Erotica 7
, edited by Maxim Jakubowski (Robinson, 2008), by permission of the author.

The dress made her do it.

It hung in the back of Carrie’s closet, hidden behind silk blouses, pinstriped pants, tailored suits, summer skirts and polo shirts. It languished there in the farthest corner of the closet while other clothes were worn for business meetings and tennis matches and birthday parties and lunches with friends. The dress stayed there when other clothes were tossed in the donation bag, when other new outfits replaced old, when seasons changed and wool trousers were chosen over Capri pants. The dress was like an old friend, waiting patiently for a long overdue call.

Finally, after months, the call came.

She prepared for her night out like a bride preparing for her wedding day. Shaved, moisturized, perfumed, adorned. She put the dress on, surprised for a moment at how form-fitting it was. She wore it only occasionally, once every three or four months, and she was always surprised by how it hugged her body. Her other clothes fit comfortably, making her hardly aware she was wearing them. She never forgot she was wearing the dress. It made her stand up straighter, suck in her stomach, thrust out her breasts that were barely contained by the corset-style bodice – and that was just while she was standing in the privacy of her own bedroom admiring herself in the mirror. Out in public, the dress made her
strut.

By the time she got to the club, her whole body was throbbing with an intense energy of things to come. It wasn’t a club she went to often. It wasn’t in the best part of town and it appealed to a crowd that was a little more . . . out there . . . than who she usually hung with. She wasn’t in the mood for the khakis and cappuccino crowd tonight. She wasn’t interested in talking politics, 401(k) plans or who was getting married or who was expecting yet another baby. Tonight she wanted to be someone else. The slut in the dress.

She was rewarded for her efforts the minute she walked into the noisy, crowded club. Not everyone stopped to look at the redhead in the black, skintight vinyl dress that laced down to her bellybutton, but enough people did look – men and women – to give her a little rush. It was the dress, she knew. It didn’t hurt that she had the body to fill it out, of course, but the dress commanded attention in a way Carrie never could. The four-inch patent leather heels didn’t hurt, either. They made her already long legs look like they went on for miles and not a man in the room could look at the shoes that matched the dress and not wonder what they would look like on the floor next to his bed.

Fending off a couple of over eager guys, Carrie made her way to the bar. The bar spanned the length of one side of the club and it was standing room only. Miraculously, as soon as she approached, a space opened up for her. She thanked the two guys on either side of her and ordered a martini.

“Thanks.” Carrie gave him a predatory smile, feeling infused with power. “But I’m not going to fuck you.”

The guy on her right laughed. “Guess she told you.”

Carrie took a long sip of the martini that appeared in front of her in record time, letting her tongue linger on the rim of the glass. Then she smiled. “I’m not going to fuck you, either.”

It probably wasn’t the wisest thing to say to two guys in a seedy nightclub who both seemed a little inebriated, but the dress made her say and do things that weren’t very wise. Like a suit of armor or a protective shield, the dress gave her power and authority. Instead of turning nasty, both men smiled good-naturedly and shrugged.

By the time she finished her second martini, courtesy of the guy on the right simply because he wanted to appear to be a gentleman, Carrie was ready to mingle. She excused herself to her self-appointed guardians with a wink and a, “Thanks for the drinks, boys,” and disappeared onto the crowded dance floor before either could follow and press the issue.

The music was heavy, throbbing techno with some retro punk thrown in for good measure. It wasn’t dancing music, it was
grinding
music and the crowd writhed on the packed dance floor in pairs and threesomes in alcohol-and-lust fueled orgiastic bliss. Carrie didn’t dance alone for long. Soon she felt the press of a body behind her. A male body. She turned in the circle of his arms and gave him a feral smile.

Her smile faded when she realized she was looking up into the face of Reynolds, one of the partners at the firm. She wracked her brain for his first name and came up blank. She didn’t know him personally, the firm she worked for was one of the largest in the state with two dozen partners and a hundred or more support staff, but they’d crossed paths a couple of times and he was attractive enough for her to notice him. Dark eyes, dark hair, older than her, but with a boyish appeal that made it hard to peg his age. Of course, she’d never seen him in a social setting wearing low-slung jeans and a T-shirt that clung to his sculpted torso.

She realized his expression hadn’t changed – he was still looking at her like he wanted to devour her – and it dawned on her that he had no reason to recognize her, especially in the dress. She was as professional and proper at work as any attorney and, out of that familiar setting and in a dress meant for a vamp, she probably didn’t look like the Carrie he might remember on a good day.

“Love the dress,” he said, his hand gliding over the slippery PVC from her waist to her hip. “You’re stunning.”

She smiled again, regaining her composure. The patent leather heels made her almost his height, so she leaned forward until her lips were nearly touching his ear. “Thanks.”

She put her arm around his neck and pressed her body against him, rubbing her crotch against his hip in a smooth, sinuous rhythm. “Sure.”

He pulled her close and rubbed his erection against her. “Want to go home with me?”

He laughed. “Well then, will you at least dance with me until my dick deflates a little?”

She pressed against him, her breasts threatening to burst out of the top of the dress. “What are the odds of that while I’m here?”

She smiled. “C’mon,” she said, taking him by the hand.

She just arched an eyebrow at him.

She led him outside into the cool night air that made her nipples pucker and raised goose bumps on her bare arms and legs. The parking lot was quiet except for a couple of giggling women hanging drunkenly on each other. Carrie’s heart hammered in her chest as she led Reynolds around the side of the club, dark but for the red light cast by an emergency exit sign. She took a deep breath. Knowing there was a chance they could get caught was part of the thrill.