The Best Science Fiction and Fantasy of the Year - Volume Eight 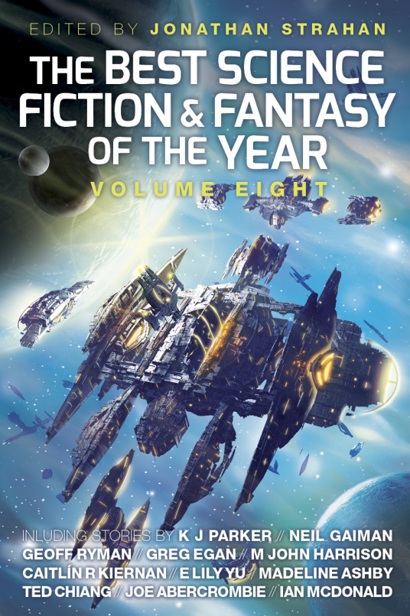 An Imprint of Rebellion Publishing Ltd

Selection and "Introduction" by Jonathan Strahan.

Pages 615-618 represent an extension of this copyright page

The right of the authors to be identified as the authors of this work has been asserted in accordance with the Copyright, Designs, and Patents Act 1988.

No part of this publication may be reproduced, stored in a retrieval system, or transmitted, in any form or by any means, electronic, mechanical, photocopying, recording or otherwise, without the prior permission of the copyright owners.

Printed in the US

For Bill Schafer, friend and maker of wonderful books…

E
diting this Year’s book has been a special pleasure and I would like to thank everyone who has been involved in compiling it, from the publishers and writers who have sent me their work, to the authors who generously allow their stories to appear here. Some people deserve special thanks, though. I feel very fortunate that the
Best Science Fiction and Fantasy of the Year
has found a new home at Solaris, and I’d like to thank my new editor, Jonathan Oliver, for bringing his editorial skill to the book: he has been consistently terrific to deal with, especially when issues arose. I’d also like to thank Ben Smith, Michael Molcher, David Moore and the entire Solaris team. Special thanks, too, to my brilliant agent, Howard Morhaim, who stood with me through a long and difficult year. And finally, as always, my sincere thanks to my loving wife Marianne, and daughters Jessica and Sophie. Every moment working on this book was stolen from them, and I am grateful to them for their kindness and understanding.

W
elcome to
The Best Science Fiction and Fantasy of the Year
. Sixty-five years ago two readers, Everett Bleiler and Ted Dikty, assembled the first science fiction ‘best of the year’ annual. It collected a dozen stories from
Astounding Science Fiction
,
Planet Stories
and other magazines of the time, a number of which, like Ray Bradbury’s “Mars is Heaven!”, went on to become classics and are now part of the SF canon.

That book,
The Best Science Fiction Stories: 1949
, was the first annual snapshot of the SF field, and it appeared at an interesting time. Up until 1950 SF had been published almost exclusively in pulp magazines. Pulp magazines were published on cheap paper in enormous numbers, often with huge print runs. They were low-cost productions with bright, garish covers and lurid sensationalistic contents. The first SF pulp, Hugo Gernsback’s
Amazing Stories,
appeared in 1926 and was followed by magazines with titles like
Startling Stories
,
Thrilling Wonder Stories
,
Fantastic Adventures
, and, most notably,
Astounding Science Fiction
.

Campbell took on the editorship of
Astounding
in 1937 and under his guidance it became the flagship publication of the first ‘Golden Age of Science Fiction’. Campbell preferred and promoted a particular sort of writing: hard SF stories with linear narratives where protagonists, almost exclusively white males, solved problems or countered threats often using technological or engineering solutions. It was a period that established many of the most enduring tropes of the field, and it was almost exclusively told in short stories in pulp magazines.

By the time Bleiler & Dikty assembled their book, though, that era was almost over. World War 2 paper shortages had a devastating effect on pulp magazine production, and there seemed to be a push for SF to grow up and move on. Robert Silverberg argued in a recent essay for the Library of America that the true Golden Age of SF was the 1950s, saying that, “Until the decade of the fifties there was essentially no market for SF books at all” and that the 1950s saw “a spectacular outpouring of stories and novels that quickly surpassed both in quantity and quality the considerable achievement of the Campbellian golden age.”

Bleiler & Dikty’s annual, the first of six they’d produce covering the first half of the 1950s, was an important part of that second Golden Age. Their books, and books like them that began to appear through the decade, provided the useful service to readers of presenting a selection of the ‘best’ and hopefully most enjoyable new stories, while also making an argument for what good SF was and what it might be. I also suspect that they were a symptom of a new self-awareness in SF, as it began to look back critically on its short history and forward to what it might become.

Bleiler & Dikty were followed by Judith Merril, who between 1956 and 1967 edited a series of annuals that deliberately pushed the boundaries of what was considered to be SF, reading widely and presenting stories that promoted higher literary standards in a series that actively worked to break down the barriers between SF and the mainstream. Edmund Crispin performed an equally vital role at a similar time in the UK. They, in turn, were followed in the mid-1960s by Donald A. Wollheim and Terry Carr, Lester Del Rey, Arthur Saha, Harry Harrison, Brian Aldiss, and others.

These books, these annual reports from one reader to the SF world, became a feature of the field, entertaining and rewarding readers and both arguing for a particular kind of SF (or fantasy) and reflecting the SF of the day. The most significant best of the year annuals of the modern era, the enormous books edited by Gardner Dozois, define the period from the mid-1980s through to the end of the 1990s, and continue to the present day. Dozois, a fine and literary writer and editor, assembled a series of books that were definitive and all-encompassing, but very much aimed at what he considered ‘core SF’. David G. Hartwell, editor of the other major SF annual anthology series of the time, often discussed in his annuals how he was deliberately attempting to shape the SF field by presenting a selection of stories that clearly belonged within the bounds of genre.

When I began this series in 2007 I hoped to steer a path between Judith Merril and David G. Hartwell, to assemble a book that was broad and wide-ranging, but didn’t lose sight of science fiction’s history or its core. It’s an awareness that I hope you will find reflected in this latest volume of
The Best Science Fiction and Fantasy of the Year
where stories like Geoff Ryman’s “Rosary and Goldenstar”, an alternate history that sits on the boundaries of SF sits alongside a space opera like Yoon Ha Lee’s “Effigy Nights” and the networked future of Ramez Naam’s “Water”, and where a slipstream fantasy like M. John Harrison’s “Cave and Julia” is in the same volume as a Neil Gaiman fairy tale retelling in “The Sleeper and the Spindle” or Priya Sharma’s powerful “Rag and Bone”. I have restricted this book to stories that I believe are definitely SF or fantasy in some way. That’s the contract I have with you, the reader, so some stories that I loved this year aren’t here because I couldn’t convince myself they belonged (the best example of this is Karen Joy Fowler’s wonderful “The Science of Herself” which has a science fictional worldview, but isn’t really SF at all), while the stories you’re about to encounter will hopefully delight and entertain while providing a view of what SF was about in 2013.