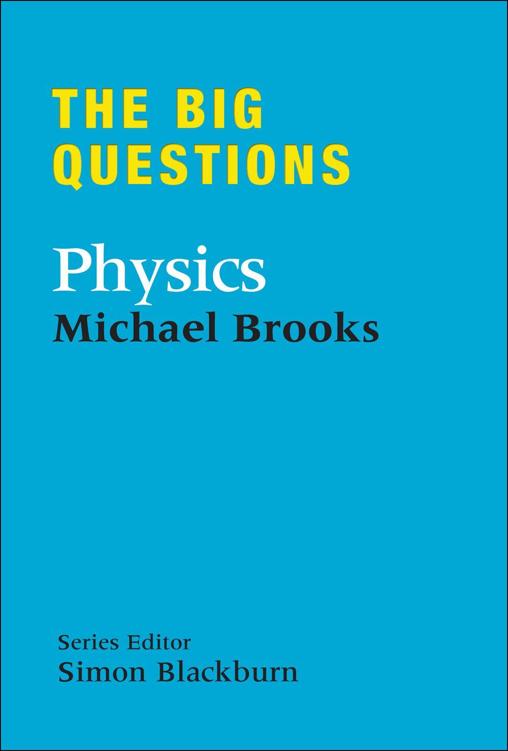 The moral right of Michael Brooks to be identified as the author of this work has been asserted in accordance with the Copyright, Design and Patents Act, 1988.

All rights reserved. No part of this publication may be reproduced, stored in a retrieval system, or transmitted in any form or by any means, electronic, mechanical, photocopying, recording, or otherwise, without the prior permission in writing of the copyright owner and publisher.

Every effort has been made to contact copyright holders. However, the publishers will be glad to rectify in future editions any inadvertent omissions brought to their attention.

Quercus Publishing Plc hereby exclude all liability to the extent permitted by law for any errors or omissions in this book and for any loss, damage or expense (whether direct or indirect) suffered by a third party relying on any information contained in this book.

All illustrations by Patrick Nugent except for p 137: Cepheus and p157: Jbourjai

Michael Brooks, author of the acclaimed
13 Things That Don’t Make Sense
, holds a PhD
in quantum physics. He is a journalist and
broadcaster, and acts as physics and cosmology
consultant to
New Scientist
magazine. He has
lectured at Cambridge University, the
American Museum of Natural History and
New York University, and his writing has
appeared in many national newspapers,
including the
Guardian
, the
Independent
,
the
Observer
and the
Times Higher Education
.

The Big Questions
confronts the fundamental
problems of science and philosophy that have
perplexed enquiring minds throughout history, and
provides and explains the answers of our greatest
thinkers. This ambitious series is a unique, accessible
and concise distillation of humanity’s best ideas.

Titles in
The Big Questions
series include:

WHAT IS THE POINT OF PHYSICS?

Impossible questions, unexpected rewards, and the never-ending quest for understanding

WHAT HAPPENED TO SCHRÖDINGER’S CAT?

Quantum physics and the nature of reality

WHY DOES AN APPLE FALL?

Gravity, mass and the enigma of relativity

Atoms, quarks and solids that slip through your fingers

WHY IS THERE NO SUCH THING AS A FREE LUNCH?

Energy, entropy and the search for perpetual motion

IS EVERYTHING ULTIMATELY RANDOM?

Uncertainty, quantum reality and the probable role of statistics

WHAT IS THE GOD PARTICLE?

The Higgs boson, the LHC and the search for the meaning of mass

The limits of our universe and the search for parallel worlds

CAN WE TRAVEL THROUGH TIME?

Drifting poles, the planet’s churning core and the threat to life on Earth

The equation that underpins the universe

CAN I CHANGE THE UNIVERSE WITH A SINGLE GLANCE?

Spooky quantum links and the chance to rewrite history

The butterfly effect’s influence on weather, climate and the motions of the planets

A strange kind of wave, and an even stranger kind of particle

IS STRING THEORY REALLY ABOUT STRINGS?

The vibrations that create our universe

WHY IS THERE SOMETHING RATHER THAN NOTHING?

The Big Bang, antimatter and the mystery of our existence

DO WE LIVE IN A SIMULATION?

Human nature, the laws of physics, and the march of technological progress

WHICH IS NATURE’S STRONGEST FORCE?

The ties that bind the universe, and their origin in the superforce

WHAT IS THE TRUE NATURE OF REALITY?

Beyond the quantum world lies the realm of information

The beauty of physics is summed up in one simple fact: a child can ask questions that no professor can answer. Indeed, searching out the ‘big questions’ in physics is rather like looking for hay in a haystack. When it comes to physics, it appears there is no such thing as a small question. A seemingly insignificant query or experiment can often lead to profound insight.

It is a short step, for instance, from asking whether the laws of physics can ever change or be broken to wondering whether there is room for a creator. It doesn’t stop there, either. Physics tells us a creator need not be divine; it could be that we live nested within an infinite number of universes, each created by a species only slightly more intelligent than its greatest creation. We may even be destined to become creators of a universe ourselves.

With such big issues at its fingertips, it is small wonder that the most iconic scientists of our generation have been immersed in physics. Albert Einstein became a celebrity almost overnight when his theory of relativity changed our conception of the universe. Carl Sagan’s TV programme
Cosmos
remains the most-watched series on public television. Richard Feynman’s cool appraisal of the physics behind the
Challenger
shuttle disaster revealed how powerful a working knowledge of the subject can be. Stephen Hawking’s work, laid out in his bestseller
A Brief History of Time
, created a thirst for scientific insight in people who had never given the sciences a thought. Only the discoverers of DNA, perhaps, can stand alongside these giants.

And yet, it has to be said, people also tend to recoil from physics. If I mention in casual conversation that I am a physicist by
training, the announcement is met with a strange mixture of admiration and embarrassment. While expressing awe at anyone who would attempt to understand the universe, many also seem to consider the subject completely beyond them. ‘Oh,’ they say, ‘I never did understand physics.’

If you recognize yourself in that statement, then hopefully this book will change your perspective. Perhaps the best-kept secret in physics is that there is too much there for anyone to understand. This is not a problem, however: this is the root of its allure.

Physics has so much to explore that, once it captures your imagination, it is hard to tear yourself away. The clock on the wall becomes a tease about the elusive nature of time. Sunshine is what results from a beautiful, intricate dance of particles known as nuclear fusion. When raindrops fall to the ground, you can ask yourself a simple ‘why?’ Exploring the answer will keep you occupied through the longest thunderstorm. The way a sunflower grows speaks of the conservation of energy and how the nature of light has shaped life on Earth. Go a step further and ask what light is, and you are peering into something widely considered to be the deepest mystery in nature.

This book is designed to show how simple questions lead to some of the most profound discoveries that humanity has ever made. They encompass the physics you probably didn’t learn in class: the real point of the subject; its implications; what we understand about the universe – and what we don’t. Carl Sagan once said, ‘Somewhere, something incredible is waiting to be known.’ Hopefully, that process can begin here.

WHAT IS THE POINT OF PHYSICS?

Impossible questions, unexpected rewards, and the never-ending quest for understanding

The question has bounced around school classrooms for decades. The answer offered usually starts with an apocryphal tale involving the legendary Greek philosopher Archimedes and King Hiero’s crown.

Hiero had come to the throne in the Sicilian city of Syracuse. He gave a craftsman a certain quantity of gold to fashion into a crown; when the crown arrived, so did a rumour that the craftsman had substituted some of the gold for silver. Hiero commissioned Archimedes, then in his early twenties, to find the truth.

The story, as related by the Roman writer Marcus Vitruvius Pollio, says that Archimedes realized how to solve the problem when he noticed the volume of water that his body displaced in a bath. Silver, being less dense than gold, would displace more water. Archimedes performed a series of experiments that involved submerging lumps of silver and gold that weighed the same as the crown to see how much water each one displaced. This enabled Archimedes to tell if there was silver in the crown. In his jubilation, Archimedes rushed down the street naked, shouting ‘Eureka’: ‘I have found it’.

Is this the point of physics: to answer seemingly unanswerable questions? We are now able to look at our surroundings across an extraordinary breadth of scales. Where we once thought visible matter to be indivisible, we have gone
smaller and smaller, down to the atom, and onward to the most fundamental particles, and ultimately to a view where matter is actually composed of fluctuations in the energy of empty space (see
Are Solids Really Solid?
). The sky was once the limit of our vision; now we know the universe to be so vast that it would take light nearly 28 billion years to cross (see
Am I Unique?
). And, it should not be forgotten, understanding the notion that light has a defined and constant speed is a hard-won triumph of physics, too (see
Can We Travel Through Time?
).

We know much of the history of the universe, the nature of matter and the structure of our planet, but perhaps the greatest lesson we have learned is that, whenever we think we have nature figured out, it surprises us again, revealing just how little we actually know. Isaac Newton probably put it best in his memoirs: ‘I do not know what I may appear to the world,’ he wrote, ‘but to myself I seem to have been only like a boy playing on the sea-shore, and diverting myself in now and then finding a smoother pebble or a prettier shell than ordinary, whilst the great ocean of truth lay all undiscovered before me.’