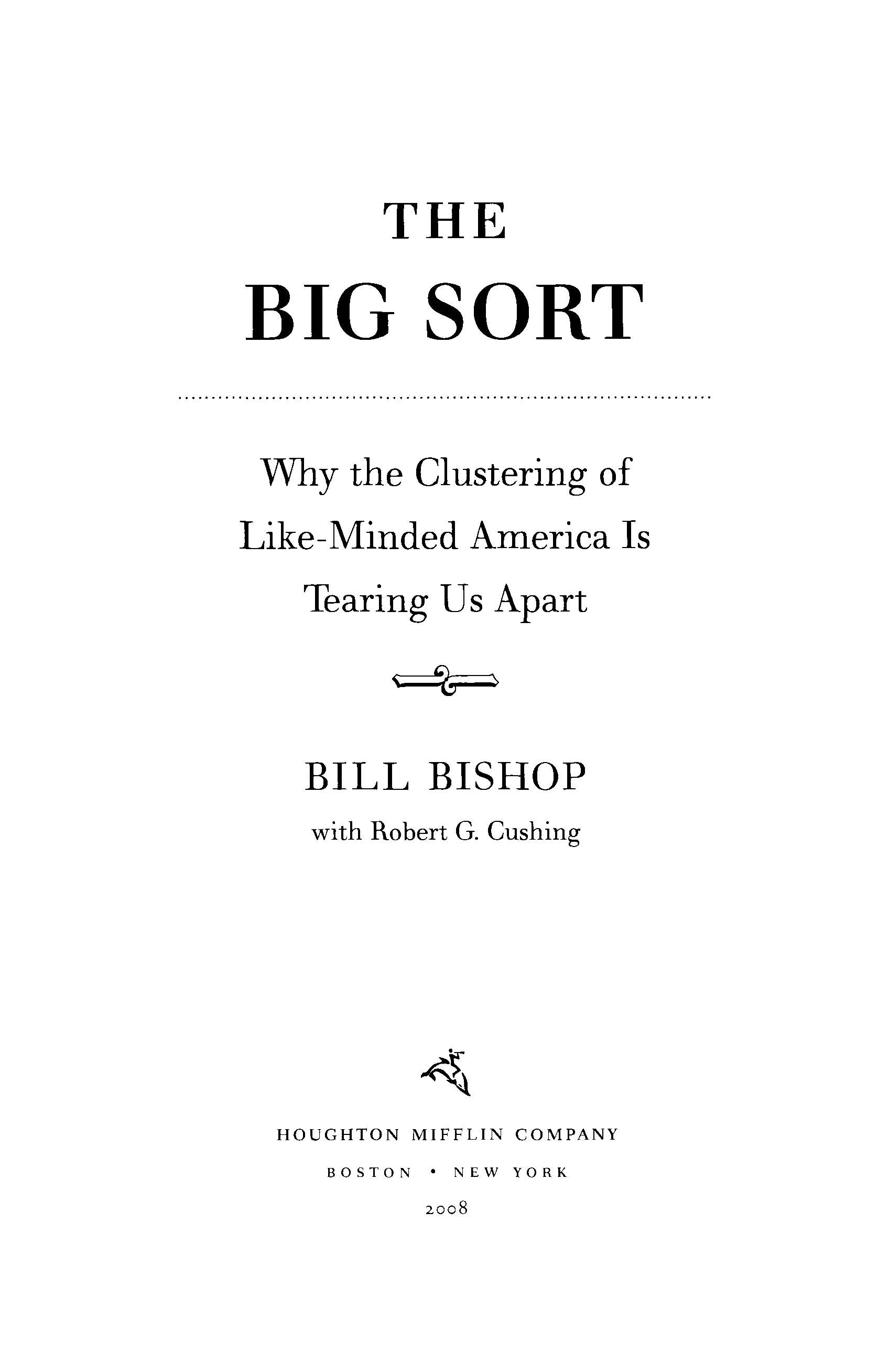 1. THE AGE OF POLITICAL SEGREGATION

2. THE POLITICS OF MIGRATION

3. THE PSYCHOLOGY OF THE TRIBE

5. THE BEGINNING OF DIVISION

6. THE ECONOMICS OF THE BIG SORT

12. TO MARRY YOUR ENEMIES

For Julie Ardery
and Frances Cushing 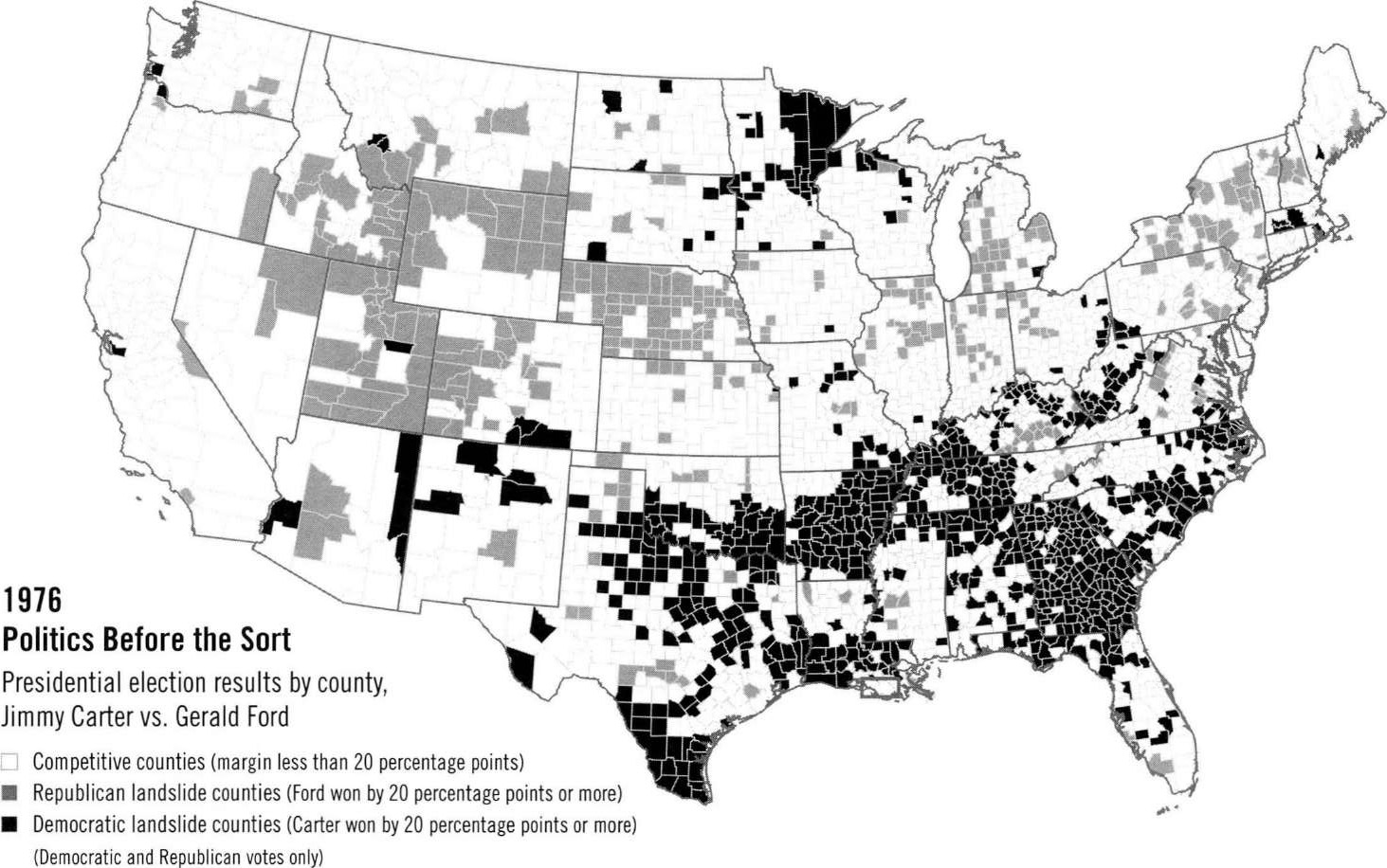 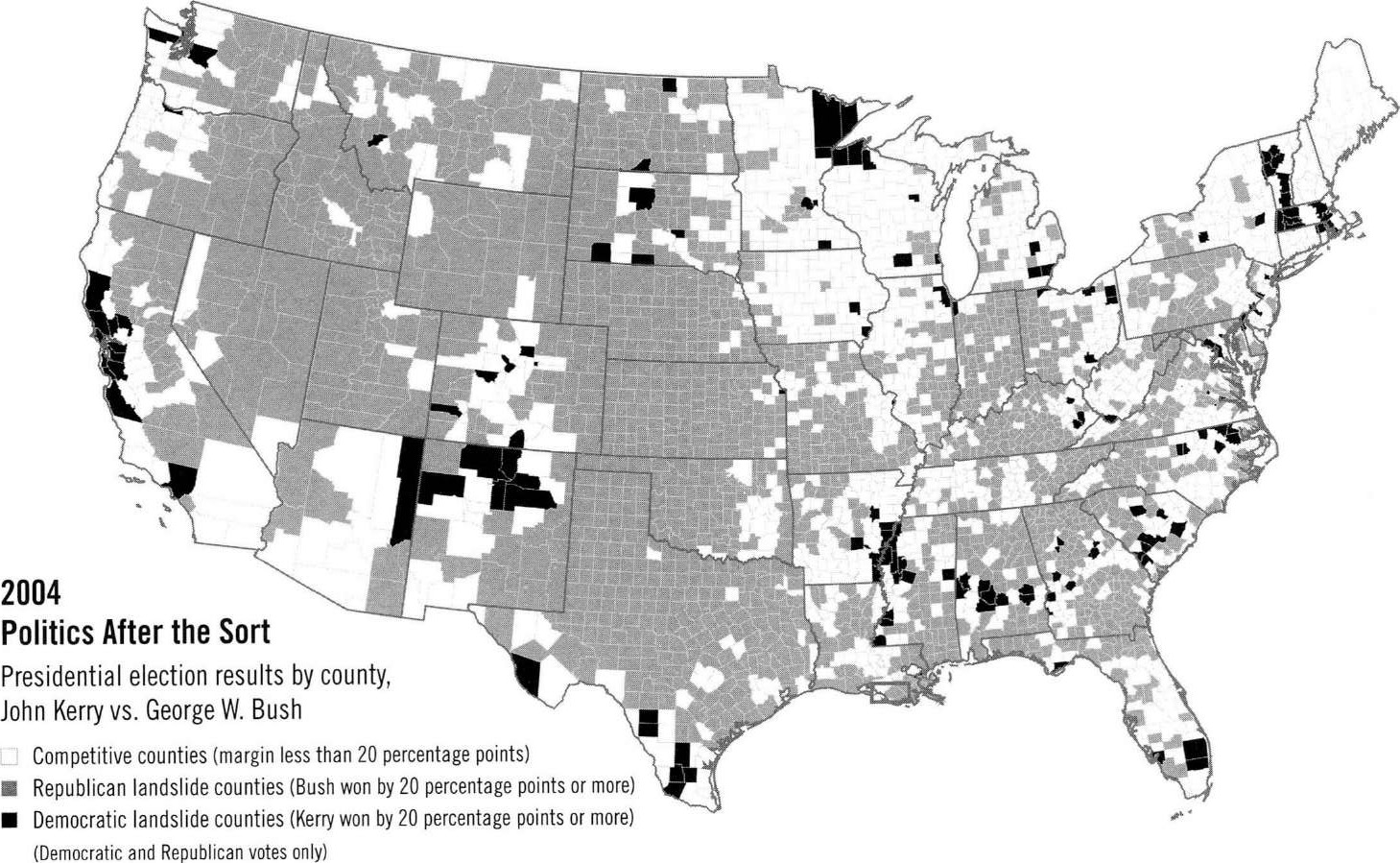 Most of us make at least three important decisions in our lives: where to live, what to do, and with whom to do it.

M
Y WIFE AND
I made the move to Austin, Texas, in the way of middle-class American migrants. We rented a Ford Taurus at the airport, bought an Austin map at a U-Tote-Um quick stop, and toured the city in search of a place to live. We didn't have a list of necessitiesâgranite countertops or schools with killer SATsâas much as we had a mental image of the place we belonged. We drove and when a place felt comfortable, seemed right, my wife, the daughter of one of Kentucky's last New Deal liberals, drew a smiley face on the map.

We didn't intend to move into a community filled with Democrats, but that's what we didâeffortlessly and without a trace of understanding about what we were doing. We bought a house on one of those smiley-face streets, a shady neighborhood of dog walkers, Jane Jacobs-approved front porches, bright paint, bowling-ball yard art, and
YOU KEEP BELIEVING; WE'LL KEEP EVOLVING
bumper stickers. In 2000, George W. Bush, then the governor of Texas, took 60 percent of the state's vote. But in our patch of Austin, Bush came in third, behind both Al Gore and Ralph Nader. Four years later, eight out of ten of our neighbors voted for John Kerry.

Our neighborhood is one of the friendliest I've encountered. It is in some ways more like the rural Texas town where we lived for a time, publishing the weekly newspaper, than a community on the edge of the central city. We have potlucks in the park and movies for the kids. A woman down the street organizes outdoor concerts to raise money so the toddlers' pool in the neighborhood park stays wet and open into the torrid Texas September. We take just as much pride in our politics. Soon after the invasion of Iraq, our neighbors held a meeting and decided to print antiwar T-shirts and bumper stickers. The agreed-upon slogan promoted both place and policy. It said simply, 78704
PEACE.
In Austin, Zip Codes have political meaning.

I live in a place where any event holds the potential for political expression, even a neighborhood house fire. On a summer afternoon, I happened on a slew of red trucks and hoses wet and slithering across a street. Firefighters were dousing the spooky Victorian on the corner. The commotion had drawn out the neighbors and a television news crew. The owners of the smoldering house had been rehabbing the structure for years, and it was beginning to shape up. The house was big and yellow, but I remembered it mostly because it sported a large peace sign dangling from the peak of a third-story window. The sign was five feet across and wrapped with Christmas twinkle lights. I commiserated with a woman walking two dogs. She had noticed the peace sign, too. Holding the leashes in one hand, she motioned toward the TV cameraman. "I hope he gets the peace sign in the picture," she said. "After all, it's Travis Heights."

Far from avoiding politics as a topic of discussion in neighborly talks, Travis Heights encourages it. That the woman could speak comfortably to me about politics evinces the solidarity of the people who live here. It was simply understood that we agreed about the peace signâand about all the issues and ways of life the peace sign represented. Our like-mindedness was a comfort, a shortcut to intimacy.

It can also be a shortcut to conflict. We have a neighborhood Internet listserver in South Austin that is often a source of good information about painters, plumbers, and lost animals. The e-discussion can also become a parody of liberal preciousness. One participant wrote to say that he planned to live-trap rats that had invaded his garage. The vermin-friendly homeowner wanted to know where it might be safe to "relocate" the rodents. The one Republican on the newsgroup, Stephen Mason, dared to say what most of us probably thought, volunteering that the man could release the varmints near Mason's rat terrier, Hotard, who would happily "relocate them to rat heaven." Our lone conservative correspondent, however, knew better than to make his comments overtly political. Mason, an intellectual property attorney and Texas A&M graduate, had tried to start a genuine political discussion on the list the year before. He wasn't about to try again.

It was the spring of 2004, so things were already tense when Mason called the newsgroup's attention to the election for the board of the local community college. Mason gave the names of both candidates, listed their websites, and then, after a warning that what followed was "possibly inappropriate electioneering," recommended one of the candidates. The man Mason backed was deeply conservative, a member of the Federalist Society, a former officer of the Young Conservatives of Texas, and an opponent of gay marriage and adoption. Within the day, the newsgroup reacted in a way that wasn't as much ideological as biological. Mason wasn't just someone to be argued against. For the protection of the group, he needed to be isolated, sealed off, and expelled.

Okay, as a member of this list, I'd really like to see this political discussion disappear. As a lesbian, obviously I'm not going to vote for anybody who doesn't believe I shouldn't be allowed to adopt kids ... As a resident of Travis Heights and a member of this neighborhood list, I'm not interested in having this kind of discussion here. I have to defend myself against my government pretty much daily these days, and one place I don't want to have to do it is on this list.

A-men. Stephen, you're in the minority politically on this list and in this neighborhood, and while your opinions are your own to have, this list isn't the place for them ... T-Hts is my home, and this list an extension of that ... I hope we can all agree to prevent it from becoming a battleground.

[The] ideological balkanization of America is dead-on true ... Living here, especially as an "out" Republican, is a great deal of fun, and I learn a great deal from it. The most valuable thing that I learn daily is the capacity to respect people with whom I have disagreements. I hope not to be exiled to some place where the vast majority agrees with me.

Then, alas, enough with the calls for reasoned discussion:

I'm really not interested [in] being surprised by right-wing e-mail in my in box, no matter what its guise. It makes me feel bad, and I don't like it.

There were dissenting views. "I really don't want political or other uncomfortable subjects segregated into some kind of opinion ghetto where only proselytizing activists and ideologues would venture," wrote one South Austinite. Another: "I'm going to stick my neck out here. I DO want to have political discussion ... It is a tragedy that this country is becoming more and more polarized. Neighborhoods are becoming more and more homogeneous, either Democrat or Republican. Talk about segregation!" But Mason got the picture: he was a Republican Crusoe on this Democratic island, and so he withdrew, promising never to talk politics again with his neighbors.

"Look, I know a lot about homogeneous political communities," Mason said one afternoon at a South Austin coffeehouse. He'd grown up in the Republican suburbs of Houston and attended the conservative hive of Texas A&M University. He was pugnacious about his politics, ending every e-mail message with a quote from Teddy Roosevelt: "Aggressive fighting for the right is the greatest sport in the world." Mason was also engaged to marry a feminist filmmaker, an experience that taught him that "nearly everything is political." But nothing had prepared him for the unsettling experience of being a political minority in the community where he livedâfor being a minority in the age of political segregation. "I ran off that listserve when the rhetoric became so shrill that I didn't have the taste for saying about anyone the things you would need to say to win that argument," Mason continued. "I'm not going to use that listserve for politics again, and there is some shame in that." The experience had changed the way he saw himself in the neighborhood. Knowing he was a minority, he wondered what people thought of him as he walked Hotard. "In some way after that exchange, I think I'm viewed with suspicion by my neighbors because of an act of political expression, which is a little on the bizarre side," he said. "I'm just a guy who has a dog and works a job."
1

The "red" and "blue" states shown on television maps during the past several national elections depict a country in a static standoff. On this scale, politics is a game of Risk. What will it take for Republicans to capture Michigan? For Democrats to regain Ohio? But people don't live in states. They live in communities. And those communities are not close to being in equipoise, even within solidly blue or red states. They are, most of them, becoming even more Democratic or Republican. As Americans have moved over the past three decades, they have clustered in communities of sameness, among people with similar ways of life, beliefs, and, in the end, politics. Little, if any, of this political migration was by design, a conscious effort by people to live among like-voting neighbors. When my wife and I moved to Austin, we didn't go hunting for the most Democratic neighborhood in town. But the result was the same: moving to Travis Heights, we took a side and fell into a stark geographic pattern of political belief, one that has grown more distinct in presidential elections since 1976.

Dream Dancer by Janet Morris
The Admiral and the Wildcat: Scifi Alien Romance by Mina Carter
The Luxe by Anna Godbersen
The Two-Gun Man by Seltzer, Charles Alden
Children of the Lens by E. E. (Doc) Smith
Snatched by Cullars, Sharon
In the Alpha's Bed (Stealing the Alpha Book 3) by Kate Rudolph
Wood's Wreck by Steven Becker
Growing Up Duggar by Jill Duggar
The Claimed by Caridad Pineiro