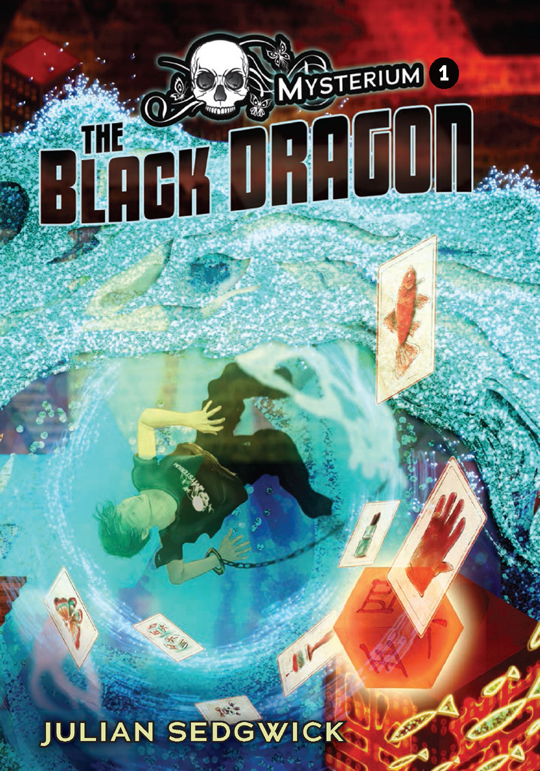 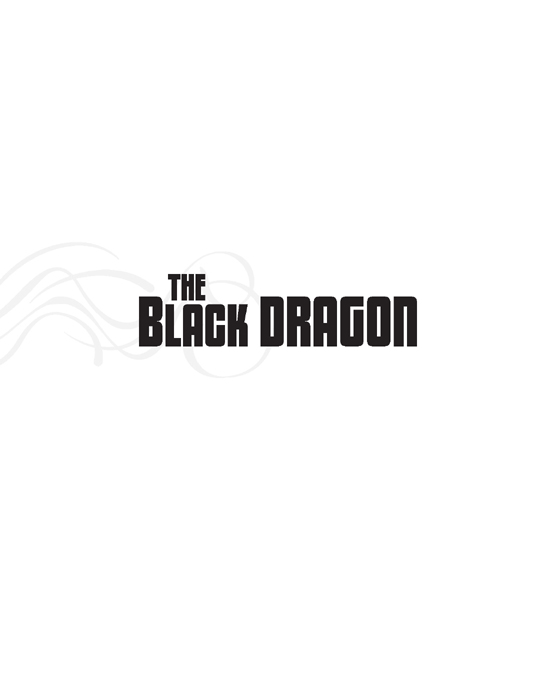 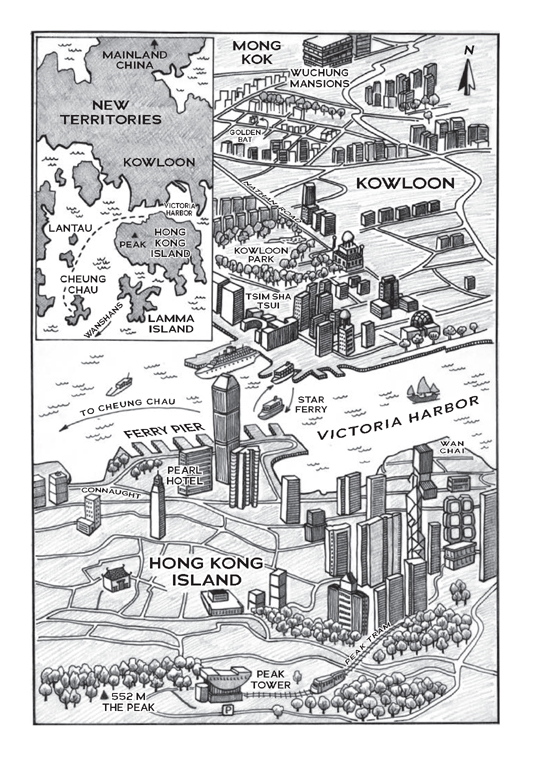 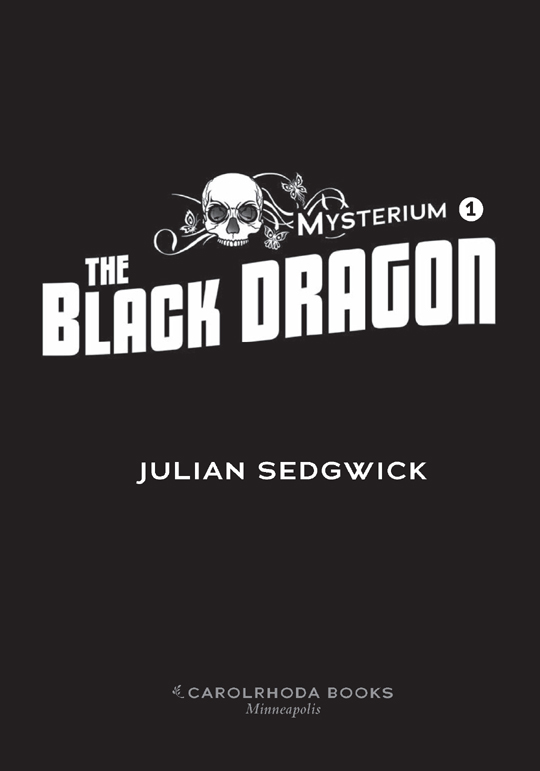 All US rights reserved. No part of this book may be reproduced, stored in a retrieval system, or transmitted in any form or by any meansâelectronic, mechanical, photocopying, recording, or otherwiseâwithout the prior written permission of Lerner Publishing Group, Inc., except for the inclusion of brief quotations in an acknowledged review.

The Cataloging-in-Publication Data for
The Black Dragon
is on file at the Library of Congress.

FOR JOE AND WILL.
OF COURSE. 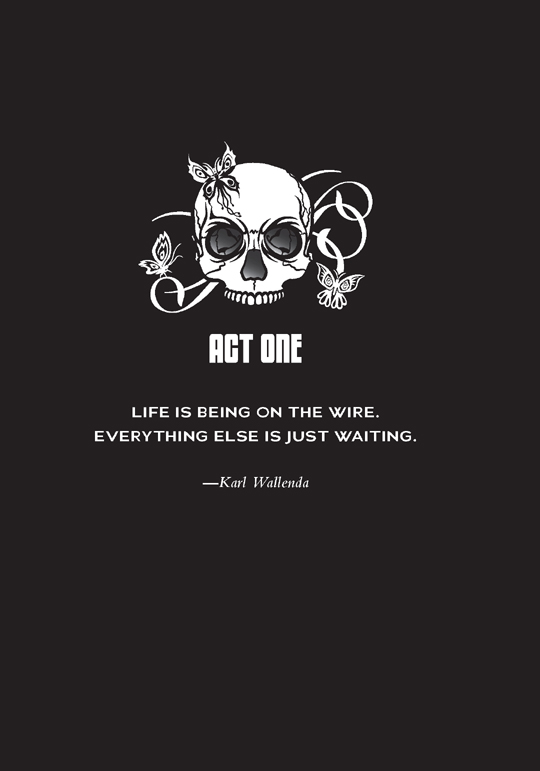 The left one is electric green, the right a deep, chestnut brown. Intense and brooding, they gaze out into the October morning.

“Hey, Woo! You going to show us your stupid card trick or what?”

Danny groans inwardly as Jamie G. leans over him. “Now?”

“Got time, Freaky. Unless you're scared of missing the bell.”

Danny shakes his head and takes the magician's deck from his jeans pocket. Heartbeat thickening, he shuffles the cards and cuts. It must work, he thinks. He must get it rightâor face more rubbish from Jamie and his mates. He remembers this very same pack sliding through Dad's practiced fingers. Hard to believe.
Concentrate, Danny.

He draws a breath, steadies his hands as the others gather to watch. The raucous noise of the changing rooms ebbs away to an expectant hush.

“OK. Pick a card,” he says, fanning the deck, holding them out face down, andâyesâthe timing of the “force” is perfect. As if drawn by a magnet, Jamie plucks out the king of spades as planned. Good.

That gives him the vital half-second he needs to get the rubber band in place, tucked behind the deck.

“Put it back. Wherever you want.” Except that's not true. It must be in just the right place.

Jamie shoves the card back, trying to throw him, but Danny gets his little finger in placeâa perfectly disguised “pinky break”âand snicks the elastic band around the corner of the king. He tightens the deck. Maybe it hasn't quite caught? No going back now.

“Think about your card. Say its name over and over in your head.” He holds the pack at arm's length, eyes burning into their backs, then snaps his little finger toward him, hidden from the others. But the band slips, and instead of jumping, the king does no more than jut up a fraction, before stopping dead.

Danny pulls it from the deck, putting on a brave face as he shows his audience. “King of spades, right?”

“Uh huh.” Jamie curls his lip, trying not to look impressed. “You got it. Now show it to me again, Freaky.”

“No,” Danny says, thinking of what Dad would say. Never repeat. Never explain . . .

“Then I'll show you my own trick, Woo,” Jamie says. He snatches the deck and hurls it into the air. “Fifty-flipping-two-card pick-up! Catch!”

The others laugh as Danny scrabbles to retrieve the cards from the changing room floor. He can smell disinfectant on the tiles, sterile and cold. He's been boarding at Ballstone for over a year, but still the place gives him the creeps. So different from the Mysterium and its heady aroma of wet grass, dry ice, burning paraffin, thunderclap smoke, greasepaintâthe vital, living scent of the big top when you unrolled it at a new venue. But that's all gone. And he's got to get used to that.

He picks the cards up one by one, counting them to make sure they're all there.

And now he's late for the next class.

Danny runs after the others, needing to make up time or face another mind-numbing detention. His slim form darts across the main courtyard, overtaking Jamie and the rest. He glances at his watchâonly a fraction past ten thirty. Should be OK.

The rooks are calling darkly overhead, flapping away at their nests in the elm trees. Danny's fingers reach for the door . . .

And then the explosion rocks the building to its foundations.

It flashes on Danny's face, whites out his vision.

The blast wave follows a split second later, thumping down the corridor, blowing out the doors, sending him sprawling across the tarmac. He knows how to fall and roll, but there's no time to prepare. His face strikes the tarmac hard and he flops over twice, before lying there stunned, listening as the explosion dies away in a long, drawn-out growl.

Stars dance in his head. The air is full of smoke and the stench of smoldering electricityâand it feels like all the breath has been sucked from his lungs.

In his mouth there's the iron tang of blood, and when he reaches up to check, his fingertips come away red. Sitting up, his mind blank for a moment, he tries to work out what has happened. It takes a minute or so to remember where he is.
Who
he is! He sees Jamie and the others staggering around looking equally dazed.

Paper from the notice boards floats down around them like oversized, charred snowflakes. One sheet, half crisped, brushes his cheekâand instinctively he reaches up to catch it. Instead of carrying the school's logo and usual heading, it's almost blank. In the middle of what's left is a small diagram of sorts: a neat grid of black dots, seven rows by seven columns. One of themâsecond row down on the left-hand sideâis circled in red pen.

The dots swim in his vision, eyes watering.

Under the diagram someone has written “1030.” The numbers are heavily done, pressed down into the paper.

He looks at it for a moment, but, like so much in his life right now, it makes no sense at all. Absent-mindedly, he folds the paper and shoves it in his back pocket.

Through the smoke he can see the rooks wheeling overhead, shaken from the trees by the explosion. They cackle and caw, ragged black crosses against the sky.

HOW TO BE FULLY ALIVE

By a fluke, the main corridor was empty when the explosion hit, and so there are no major casualtiesâjust nasty cuts and bruises from flying debris, and a few students suffering from shock. They sit around the courtyard, dazed, wrapped in reflective blankets, while the emergency services put up yellow tape and walkie-talkies crackle the air with static.

Danny is assessed by a paramedic. She asks if he banged his head, and gets him to follow her finger with his eyes, before shining a torch deep into them.

“Pupils dilating fine. Nice colors!” she adds with a smile. “You get them from Mum and Dad? One from each?”

Danny does his best to smile back, but as the medic dresses the cut, she notices that his eyes don't join in. The rest of the face is almost frozen.

“Well, take it easy, young man. Watch out for shock.”

He nods. But isn't that what he's been feeling each and every day this last year and a half?

Classes are suspended until further notice and Danny retreats to the sanctuary of the room thatâthankfullyâhe has to himself. He flops on the bed and stares at the cracks in the ceiling. A few minutes earlier and . . . No, it doesn't bear thinking about. He shakes his head to clear the thought.