The Black Mausoleum (Memory of Flames 4) 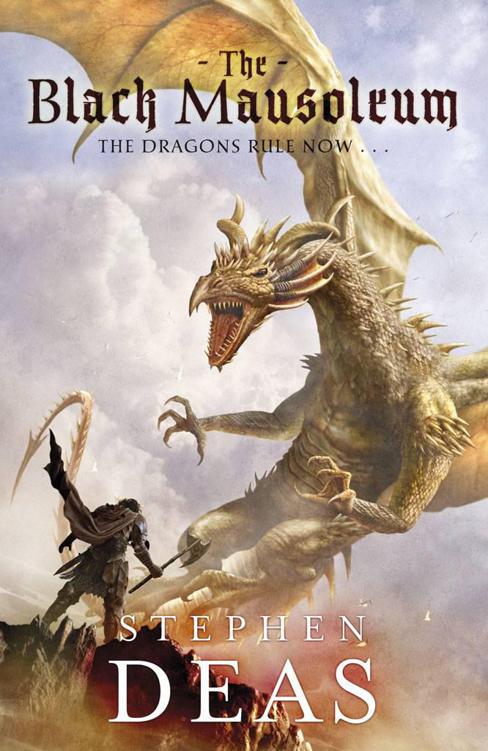 True courage is not the brutal force of vulgar heroes, but the firm resolve of virtue and reason.

Twenty-three days before the Black Mausoleum

He wasn’t stupid. Kataros had seen the way he looked at her, right from the start. Her jailer. She was a woman in a prison cell, frail and fragile, and he was the man
charged with keeping her, a brute, massive and scarred with one crippled hand. In stories that went one of two ways. Either he’d fall in love with her, or he’d try to rape her and
she’d get the better of him. Either way, in stories, fate always found a way to save the frail and fragile woman.

Actually no. In the childish stories she remembered the frail and fragile woman never saved herself. In those stories she stayed exactly where she was until some gallant rider on the back of a
dragon tore open the door to her cell with his bare hands and whisked her away to a happy-ever-after. But in this story that wasn’t going to happen, which left her back where she started. He
was interested. He didn’t take much trouble to hide it either. He wasn’t ugly, at least not on the outside, despite the scars. He was an Adamantine Man, though, and so her story
wasn’t going to end in love.

There weren’t many cells down here. As far as Kataros could tell, there hadn’t been any at all until recently. Whatever this place was it had served some other purpose, something
more benign, probably until the Adamantine Palace had burned. There were patterns on the floor, tiles, half buried now under a layer of filth. Ornate murals and faux arches decorated the walls.
They were all over the place those arches, in almost every room she’d seen as they dragged her here. At the far end, towards the door that was the only way out, hangings lined the walls,
intricate pictures of Vishmir and the first Valmeyan duelling in the skies; of the body of the Silver King, carried towards his tomb by men in masks and veils; of Narammed holding the Adamantine
Spear, bowing down so he looked almost as though he was worshipping it – she could understand that, knowing now what it did.

Yes, it had been a genteel room once, quiet and out of the way and meant for reflection until someone had slammed in a few crude rows of iron bars and called it a prison.

There was no privacy. The prisoner in the cell next to hers had stared the first time she’d had to squat in a corner. The Adamantine Man, at least, had looked away.

She steeled herself to wait until the gentle sunshine glow of the walls and of the ceiling faded to starlit night. Not that waiting was difficult. She hadn’t been fed since she’d
arrived and so hadn’t eaten for most of a week, and a few more hours would make no difference. The man in the cell next to her had been here longer. He’d been little more than a
skeleton when she’d arrived. These days he hardly ever moved. He was dying, slowly but surely.

There weren’t any others, just the two of them and three more empty cells. Their floors were like hers, covered in filth crusted dry with time, yet the air in the prison smelled fresh and
cool. That was the magic of the Pinnacles at work, the magic of the Silver King who’d come from nowhere and tamed the dragons, who’d built the world that every last one of them had come
to know and then been torn down by jealous men.

Kataros spared a glance for the other man. His name was Siff, but she thought of him as something else. The Adamantine Man called him Rat, and she could see that too. He’d talked a lot
when they’d first thrown her in the cell beside him; mostly he’d talked about all the things he’d like her to do for him, or the things he’d like to do to her if only he had
the chance. That had been before starvation had turned its final bend and the lechery and the leering had given way to ranting and raving. Once, as the madness took him, he’d let slip his
name.

He’d told her a lot of other things too, as he slipped away, more than enough to make her wish she’d heard them when he was lucid. He’d come out of the Raksheh. He’d
crossed the whole Realm of the Harvest Queen and yet the dragons hadn’t eaten him. You had to admire anyone who could do that yet here he was at death’s door, starving. A week or a day
or somewhere in between, was all he had left.

She let him go and turned her eyes back to the Adamantine Man. He was watching her. There was no pretence about it – today he was simply staring. Something had changed, had it? Most likely
the man who called himself King of the Pinnacles had decided there would be no reprieve. Hyrkallan, that was his name. She’d heard of him before she’d come here, but she hadn’t
understood his hate for her kind until it was too late. There would be no change to his law, no clemency for any who called themselves
alchemist
, no matter what they might bring. And what
did
she bring? A hope that was no hope at all. An impossible idea. Another mouth for a starving court to feed.

She looked at the Adamantine Man as he stared at her. She bit her tongue until she tasted blood. ‘Hey.’

‘Hey!’ Half the Adamantine Men she’d ever met thought that the War of the Two Speakers had made them into gods. The other half were mad, as if there was much difference. Some
managed to keep some seed of civilisation inside them, but most of the ones she’d seen were violent drunkards, brutes, rapists who thought they had a right to anything and everything.
We
are swords. We sate ourselves in flesh as the need comes upon us and then we move on
, that was their creed and they were proud of it. Sometimes they killed dragons like they were supposed to,
but usually when they tried that they just died.

This one still didn’t answer. His eyes didn’t flicker. He was making it hard for her, harder than it already was. The blood in her mouth sharpened her mind. She could see the
knowledge in his eye. They both knew what was coming.

‘Hey.’ She made her voice softer this time. He moved a little now, tilted his chin slightly and looked at her some more, silent as the still air. She forced herself to get up and
walk towards him until she was almost against the bars. If he’d wanted to, he could have reached through and touched her.

For a long time they looked at each other.

‘I’m hungry,’ she said. Each day he brought them water. Water, water, always water, the one thing the Pinnacles never lacked. He never brought food. He never ate in front of
them either, but she could smell it on his breath. Food. The answer was in his eyes.
Everyone is hungry.

‘Are you going to ask me to be gentle?’ he asked.

Eight months before the Black Mausoleum

Bloodsalt. There used to be a city here. Skjorl had never seen it in its glory and never would because it had been gone for more than a year. Burned. Flattened. Crushed. The
alchemists said it had been the first city to fall when the dragons had broken loose, the first place they’d gone after shattering the tower at Outwatch. The first and now the furthest from
the few companies of Adamantine Men who still survived. Skjorl watched the sun set behind it. There was nothing left, nothing but ash and sand and salt and ruin. The dragons had dammed the river.
Changed its course. Whatever they hadn’t burned, whoever had stayed hidden, had been left to parch in the relentless sun. The more foolish probably tried to drink from the lake; they would
have been the ones to die first, for the waters of Bloodsalt had earned their name. As for the rest, the last survivors? Skjorl had walked past their bones, scattered along the Sapphire valley.

Now he lay on the top of a low hill, squeezed between two rocks and hidden beneath a thorn bush, itself old and dead and dried. The river had found its way through the dragon dam in time, but
not until everyone here was long dead. Nonetheless he kept absolutely still. There were still things alive at Bloodsalt. There were dragons.

His fingers tightened around the haft of his axe, closer to him and cared for with more tenderness than any lover. He squinted. Two adults. The same two adults he’d seen every day for more
than a week now as he and what was left of his company of men eased their way along the Sapphire valley towards the lake and the ruins of the old city. Two adults and perhaps a score of hatchlings.
More dragons than any of them had seen in the year since the Adamantine Palace burned.

Terror by Gaslight by Edward Taylor
Dirty Aristocrat: British Billionaire Bad Boy Romance by Unknown
Dawnflight by Kim Iverson Headlee
This Ordinary Life by Jennifer Walkup
The Elegance of the Hedgehog by Muriel Barbery, Alison Anderson
The Last Flight of the Argus by E. R. Torre
Because of Stephen by Grace Livingston Hill
I Pledge Allegiance by Pat Mora
Aftershock by Sylvia Day
Dead Hunger III: The Chatsworth Chronicles by Eric A. Shelman