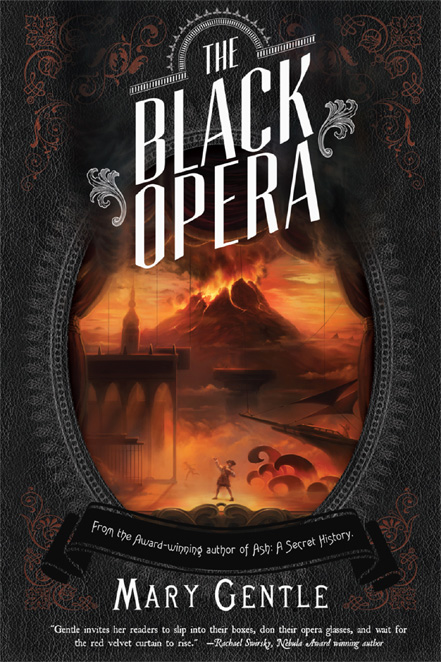 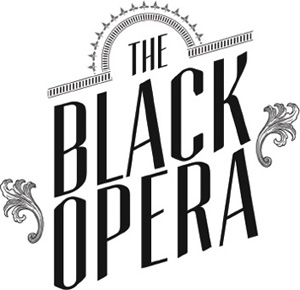 âa novel of Opera, Volcanoes, and the Mind of Godâ

To Maggie Noach, a much-missed friend
.

This story takes place in that curious gap in European history, the two decades between the battle of Waterloo and the arrival of the Victorian age; when bel canto opera flourished, and the word
“scientist”
was first coined.

I have used the source material regarding the history and royalty of the Kingdom of the Two Sicilies with the same careful and exact attention to detail as the bel canto composers.

Given that Gaetano Donizetti once set an opera in Liverpool and described it as “a small Alpine village outside London,” the reader is probably safe in regarding
The Black Opera
as Alternate History.

T
he water rose up in a wall like the end of the world.

The ship's prow dropped downâdownâso far down it seemed impossible it could ever lift againâSpilling off a monumental weight of water, it began slowly to rise.

The Flores Sea blazed, darker than indigo, every wave crest tipped with crimson and carmine.

Yes, we are a day late. The dark of the moon was yesterday
. But perhaps,
perhaps
we will not all be dying for nothingâ

Ranieri glanced back through the glass of the steamship's wheel-house. Two of his men grappled with the captain: a grey and grizzled man in a salt-worn peaked cap. By his lip movements, he appeared to be shouting.

Protesting where we're taking his ship, no doubt
.

The steam-driven paddles made it in advance of all its kind; keel laid down in France by special order.
That alone must make it ours, to do with as we wish
, he thought.

A pain sawed at his waist, from the rope that bound him to the rail.

The wind, hot and abnormally dry, snatched the voice from his mouth. He shouted to the woman:

Identical ropes trapped her. The same wind snapped her black hair out in a pennant, and slapped it back in her face. Against the violet sky, she appeared a ghost from Byron or Shelley; her skin visibly white through the skirls of ash and spray.

Her gaze riveted, not on him, but on the child he held.

The girl, her daughter, had no ropes lashing her to the rail. Nothing held the six year old safe on the pitching, yawing deckâexcept the grip he had on her shoulders.

He read it from her lips. Not his real name, but he has been answering to it from Rome to Indonesia.

“Give me Maria Grazia!
Anything
else is yours!”

The ship's prow strained, lifting towards the vertical. As if the baying of the gale were nothing, he mouthed his order again at the woman. And lifted one hand free of her child.

The woman frantically nodded, her hand shielding her mouth against the snowfall of ashes.

Air cleared unnaturally around her face.

She began to sing.

It should not have been possible to hear her over the storm. That he could hear a thread of sound, no matter how soft, under the ear-battering gale, made his spirits rise immeasurably.

The whole hull thrummed with the straining side paddle-wheel's engines. Barely a dishrag of canvas high on both her masts kept her facing into the seas.

The ship stood all but upright on her stern at the top of the alizarin and scarlet wave. The prow pitched forward; down. Spray deluged him, tightening the hemp ropes painfully. A hill of water momentarily cut off the wind from his right-hand side.

At one and the same moment, he heard the singer's voice leap up into a spine-shivering soprano, and saw clear across the seething ocean to the island.

Sumbawa: one among an archipelago of thousands of islets that make up the Lesser Sundra Islands, on the border between Indonesia and the Indian Ocean. Twelve thousand miles from Europe, and fifteen miles away, now, from their foundering ship in the tiny Flores Sea. An island-shape barely visible in the dimness.

He could not have seen it at all if not for the single cone of the volcano, Mt. Tambora. A lightning-filled pillar of smoke plundered upwards from the volcano: dark violet and deepest black.

Hard to be sure in the spray and detritus-filled airâ¦ He slitted his eyes, and made out a red spark of lava beginning to snake down from the peak.

“Sing louder!” He shrieked into the momentary lull of the wind, barely audible over the slamming of steam-pistons, and the shrill sound of rivets popping free of the side paddle-wheel casing.
“Sing!”

The woman sobbed a note, reaching out her hands to her daughter.

Ranieri picked the child up. He put a distasteful hand over her mouth to stop her blaring; ignored her kicking, stained legs, and held her outâto the full
length of his armsâso that she would fall directly into the glistening slide of the wave's trough, never touching the ship's side.

He did not need to voice the threat. Only the exhortation:

“Sing louder!
better!
than you have ever sung before!”

Ranieri drew in a breath, sour with the volcano's exhaled gases, and sent his own ringing tenor to join her, spiralling upwards in a duet.

Keepers of the Covenant by Lynn Austin
The Highlander by Elaine Coffman
Awakening Beauty by Bonnie Dee and Marie Treanor
Deadlocked 5 by Wise, A.R.
On Deadly Ground by Lauren Nichols
Recipe for Disaster by Stacey Ballis
Pack of Lies by Laura Anne Gilman
Wanted by Potter, Patricia;
Kidnapped and Claimed by Lizzie Lynn Lee
Shogun by James Clavell