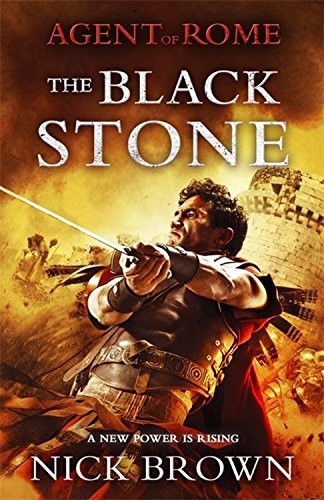 Nick Brown grew up in Norfolk and later studied history at the University of Sussex. In 2000 he embarked on a PGCE course at the University of Exeter and began a career as a teacher of humanities and English. Having taught in England and Poland, he has recently returned to his home town, Norwich.

The Agent of Rome series

The right of Nick Brown to be identified as the Author of the Work has been asserted by him in accordance with the Copyright, Designs and Patents Act 1988.

The Romans divided day and night into twelve hours each, so the length of an hour varied according to the time of year.

The seventh hour of the day always began at midday.

Four sesterces (a coin made of brass) were worth one denarius.

Twenty-five denarii (a coin made partially of silver) were worth one aureus (partially gold).

Ursus took his mug from the bedside table and turned back towards the girl. Like him she was naked, lying on her front, feet atop the bunched-up blankets. She was sleeping now, head resting on her crossed arms, sleek black hair splayed between her shoulder blades. Sipping the honey-sweetened wine, Ursus surveyed her body and allowed himself a triumphant grin: as shapely a back as he’d seen; narrow waist; pale, inviting buttocks; and legs slender and shapely enough to drive a sculptor to distraction.

He’d spotted her a few days ago, several weeks into the posting at the temple and long after the more forward of the men had taken up with the more forward of the local girls. Such arrangements were as old as the hills; in return for a few coins every month, they would offer their favours plus the odd bit of sewing and the occasional home-cooked meal.

Ursus was pretty sure none of the legionaries had been near this one, though. The younger men were too interested in powdered faces and low-cut tunics to bother with her. But he’d been around long enough to take his time, seek out a nice girl who hid her assets well and wouldn’t cause him any trouble.

Even so, he’d taken the precaution of bringing her to his quarters only after dark (the men had been told to keep their dalliances completely away from the barracks). It was best all round if the priests didn’t find out. Holy men could be funny about that sort of thing and he didn’t want any trouble when the tribune next visited. In fact, he didn’t want any trouble full stop. Army postings didn’t come much better than this one.

The candle on the other side of the bed flickered, casting watery light over the girl’s skin. Ursus commended himself once more; he really had outdone himself this time. Who else would have noted the statuesque curves beneath the dull, shapeless clothing? He moved down the bed and ran his tongue over her hip, then sucked at the soft, yielding flesh of her bottom.

She gave a little moan then opened her eyes and turned over. ‘Is there more wine?’

He passed her the mug and continued kissing: her side, her belly, then up between her breasts to her throat. Giggling, she stretched over him and put the mug down.

Ursus lay back and let out a long breath. ‘So was I right? Did you enjoy yourself?’

She hissed the second syllable and ran her fingers through the thick hair upon his chest. He hoped she wouldn’t notice the few grey ones that had appeared in recent years.

‘Tertius.’ She caressed the bunched muscles of his left shoulder.

Staring up at the shadowy ceiling, Ursus reminded himself to give her some of that herb concoction he’d bought in Gerasa. The officers there had sworn by it, told him it never failed. The last thing he needed was a girl with child.

She lay back and nestled against him. Ursus checked the hourglass by the candle but then remembered he hadn’t turned it since she’d arrived. Judging by the impenetrable dark beyond the window and the lack of noise coming from the barracks, it was late. Agorix would have come to tell him if any of the men were causing trouble but it was a relief to know they were asleep. Most would be drunk, of course – that was to be expected on the last night of the Festival of Mars – but they would still have to be up early, ready to take over from the unfortunates currently on duty.

All Ursus could hear was the girl breathing. He thought about putting his hands on her again, getting her wet for a second bout, but he too had downed a jug or more and he couldn’t leave everything to Agorix the next day. Better to sleep and be up in time to get her safely away unseen. He’d make sure she didn’t leave without some of the concoction, of course. Couldn’t forget that.

Settling into his pillow, he flicked the blanket up over his feet and closed his eyes. He knew he’d sleep well anyway but routines were routines and this one rarely failed him.

The ringing of the bell was frantic and at a higher pitch than the one used by the priests. Ursus hazily remembered it had been his idea – to be used only in an emergency. And now someone was ringing it in the dead of night.

‘Blood of the gods.’

He half-clambered, half-fell out of the bed. Finding himself sitting naked on the chilly floor, he grabbed one of his boots and pulled it on. ‘There’s a lantern below the window. Light it.’

‘Light it! Use the candle.’

Ursus put the second boot on and made sure he tied the laces well. The girl was up but stumbling around.

‘Use the candle,’ he repeated. ‘Lantern’s on the floor below the window.’

He snatched his tunic from the hook closest to his bed and pulled it on over his head. The bell was still ringing. And was that shouting in the distance? On the second hook was his belt. Once he’d buckled it, he turned; the girl had the lantern’s shutter open and was now lighting it. On the third hook was his sword belt. He grabbed it and threw it over his shoulder. He hurried around the bed and the girl handed him the lantern. ‘What is it? What’s going on?’

He ran back across the room and wrenched the door open. ‘Stay here.’

He stepped outside and pulled the door shut. Despite the clanging of the bell, the parade ground was empty, the only light provided by the torches mounted at each corner. He turned to his left and gazed past the barracks. The army post was separated from the temple by two hundred yards of path surrounded by woodland. He saw dots of light – torches on the move. He heard more shouts, then a man scream.

Lantern held out in front of him, Ursus ran into the barracks and along the central corridor. ‘Get up! Boots and swords!’

There was no time for anything else; he just had to get to the temple with as many legionaries as he could muster. ‘Get up! Boots and swords! Every last man. Up!’

He darted into the closest room, which stank of bodies and wine. All eight beds were occupied but only one soldier had made it onto his feet. Naked but for a loincloth, he winced at the light.

‘Yes, sir,’ replied the legionary, staggering towards the equipment rack by the door.

Ursus reached for the closest man still in his bed and bodily dragged him out onto the floor. ‘Get dressed. Get your weapon!’

The still-drunk legionary grunted something but Ursus was already back outside and pounding along the corridor again. ‘Get up! Every man! Up!’

A few of the soldiers were out of their rooms and awaiting orders. A slight figure pushed between two of them and approached Ursus. ‘Centurion.’

The soft Gaulish accent of Agorix, the younger and more able of the two guard officers.

‘Sounds of battle from the temple, sir. We’re under attack.’

‘Get them up, get them outside.’

Ursus ran on, bellowing as he passed the remaining rooms, half a dozen men now behind him. In the last doorway on the right, one soldier was struggling with the straps of his segmented armour.

‘Forget that.’ Ursus pulled him into the corridor.

Just as he exited the barracks, a figure came bolting along the path. Ursus was about to draw his sword when the man tripped and fell in front of him. He was clad in long robes, his hair cut in a childish fringe. The young priest cried out as Ursus grabbed him.

The priest shook under the centurion’s grip.

The youth uttered a garbled stream of Aramaic. Ursus didn’t understand a word. He let go and moved away from the barracks door to let the others out.

Perfiditas by Alison Morton
Chasing Dare by Mikayla Lane
Evolution, Me & Other Freaks of Nature by Robin Brande
High Spirits at Harroweby by Comstock, Mary Chase
In a Class of Their Own by Millie Gray
Infinite Desire by Danielle Jamie
Geared for Pleasure by Grace, Rachel
Phantoms of Fall (The Haunting Ruby Series Book 2) by Joy Elbel
Skylark by Jenny Pattrick
My Ruthless Prince by Gaelen Foley