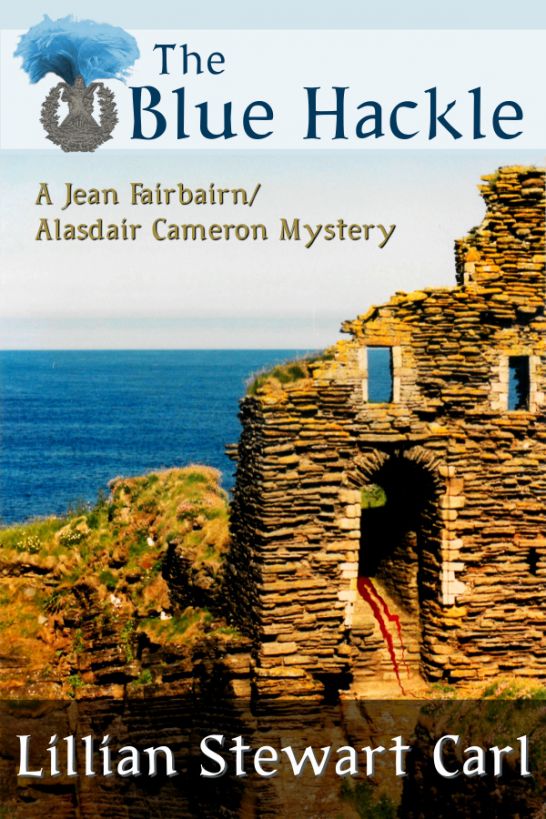 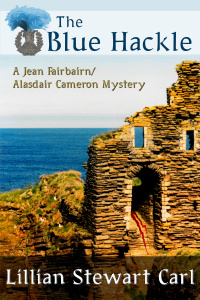 What reviewers are saying about
The Blue
Hackle

Jean Fairbairn and Alasdair Cameron are
getting married on New Year's Eve at friend Fergie's Dunasheen
Estate on the Isle of Skye. Alas, a guest is found murdered
beforehand. Fifth in what is billed . . . as a cross-genre series
(mystery, romance, paranormal) . . .—
Library Journal

Lillian Stewart Carl is very adept at placing
her readers in her geographical settings. [She] weaves an
interesting plot with myths, legends and the paranormal along with
a secondary storyline for the upcoming wedding. In
The Blue
Hackle
each and every character is skillfully portrayed with
diversity. A most enjoyable read intertwined with Scottish history
and geography.—Connie Gregory,
conniesreviews.blogspot.com

I've enjoyed this series so far and The Blue
Hackle is the best so far . . . As you'd expect there's a great
sense of place, in this case, the Isle of Skye. The people are
definitely individuals—there are no interchangeable characters as
filler . . . Normally, I can figure out mysteries quite early, so
it is a joy to find books where I can't guess until nearly the last
page . . . get yourself a copy of
The Blue Hackle
. If you
enjoy it as much as I did, you can then read the earlier works
since each one can stand alone.—Gayle Surrette,
Gumshoe
Review

This book is available in print at most
on-line retailers

Jean Fairbairn peered over the railing of the
footbridge. If sufficiently motivated—chased by bloodthirsty
swordsmen, for example—she could have dangled by her hands from the
walkway and dropped into the rocky, muddy gully that had once been
a moat. She’d be skewered anyway, but giving up and going quietly
had never been part of her vocabulary.

Nor was it part of the vocabulary of
Scotland, where the past had played out in scenes of blood and
thunder, fire and sword. Now popular memory and the Scottish
Tourist Board elided here, revised there, and edited fierce
bloody-mindedness into high Romance. Though history could still be
perilous, as the thud and blunder of Jean’s own, lowercase, romance
had proved.

Alasdair Cameron, the object of her romantic
inclinations, inspected the ruined castle that rose above the far
end of the narrow walkway even as he said, “No need to go chucking
yourself over the edge just yet, the wedding’s not ’til the
third.”

“Thank you, light of my life,” Jean returned.
“Was it this Dunasheen Castle or the other one where Rory MacLeod
tried to jump from wall to tower to see his lady love?”

“This one, I’m thinking, it being a medieval
tale. Though it goes that he reached his lady love via the stairs,
her husband came breaking in, sword in hand, and he made the leap
from tower to wall, meaning to escape.”

“Both versions are variations on a theme, the
lover’s leap, fatal or otherwise.” That brought Jean back around to
the choice she did not, thank goodness, have to make, between a
sharp edge and a hard place—her imminent matrimonial plunge
notwithstanding.

She hadn’t intended to fall for anyone, let
alone a Scottish detective inspector. And now-ex-policeman Alasdair
hadn’t meant to fall for a part-time historian, part-time
journalist, full-time inquiring mind wanting to know. But their
hearts had led, leaving their heads to play catch-up, and here they
were, on a bridge both literal and symbolic.

Smiling, Jean also considered the
snaggle-toothed battlements of the ancient castle keep. Outside the
tower, lichened blocks of dark gray stone imperceptibly became
lichened bedrock, knitted together with tussocks of grass and
tufted by saplings springing from crevices. Inside the tower,
seabirds nested in empty windows and in hollow fireplaces now
suspended from sheer walls. The wooden floors where people had
stood warming their chilblains, cooking their food, and thanking
goodness for strong defenses atop a small, craggy islet—moats and
drawbridges making good neighbors—had decayed into nothingness long
ago.

The old castle was dignified in its
desolation, and yet Jean also sensed an air of sadness for times
past and regret for lives spent. She wouldn’t be surprised if it
was also haunted, but she hadn’t lingered long enough for her
spectral early warning system to activate.

Alasdair raised his camera, took several
photos, then jotted something on a notepad.

“Now what? Secret passages? Buried treasure?”
Jean pulled her hands up into her sleeves in an attempt to warm
them up.

“That path running outside the enceinte, the
boundary wall,” he replied. “It’s partially eroded, right
dangerous, and wants blocking off. Or rebuilding with a railing,
but Fergie’s saying he can afford only what will keep the place
standing.”

“Structural faults aren’t really in your line
of work.”

“Oh aye, here’s Fergie—and wee Diana as
well—thinking I’ll be advising him on locks and the like for the
new castle, not on shoring up the old one, but it’s something I can
be doing to help. This bridge, now, is likely no more than thirty
years old. A bit damp, mind. It wants checking for rot.” He stamped
on the walkway, sending a reverberation through the wooden slats
beneath Jean’s feet.

A good thing she wasn’t acrophobic.
Claustrophobic, yes, and dubious about darkness. She’d declined a
visit to the dungeon in the foundations of the old tower, more like
a cave than a cellar, never mind Alasdair and his flashlight. The
issue wasn’t only its impenetrable shadow and low, vaulted ceiling,
but its smell; dead fish, defunct rats, decaying seaweed, mold and
mildew.

She inhaled deeply of the cold wind and
vaporized Atlantic that scoured her cheeks—out with the bad air, in
with the good—and looked up at the sullen gray sky. Sea gulls
spiraled like flecks of white confetti, their harsh squawks
piercing the thrum and seethe of the waves against the far side of
the islet. “What isn’t damp? This is the Isle of Skye. It’s a giant
soggy sponge. Look at those clouds, it’s going to rain again any
minute. Sleet. Snow.”

“It’s not cold enough to sleet or snow.”

Alasdair glanced at his watch. “It’s getting
on for half past three. Sunset, this time of year.”

“Tell me about it. I moved to Edinburgh from
Texas last January. That was a shock. It wasn’t until it was still
light at midnight in June that I thawed out and dried up.” Not
least because it was in June that she and Alasdair stopped circling
each other like duelists and surrendered to their mutual
attraction.

If he caught her reference, he showed no sign
of it. Grasping her gloved but cold hand in his, he pulled her
toward the mainland—or main island—side of the bridge. “Skye can
have positively brilliant days in December and January. We’ll be
seeing one yet. Just now, though, we could do with a cuppa.”

Their rubber wellie boots clumping, they
scrambled up the mud-and-gravel path to the top of the brae. This
hill might not be nearly as tall as the towering cliffs propping up
other stretches of the Skye coastline, but still it commanded a
view. Or would, when one of those brilliant days came along. Fergie
promised a panorama, from the islands of the Outer Hebrides across
several miles of open sea to the north to the peaks of the Black
Cuillins to the south, beyond the end of Loch Roy, a narrow inlet
of the ocean that formed the eastern boundary of Dunasheen
Estate.

Now, though, either sinking cloud or rising
mist blotted the horizon, and the waves where loch met sea, below
the ramparts of old Dunasheen, gleamed gunmetal gray. The terrain
resembled a tattered crazy quilt laid over the bones of the earth.
Patches of olive drab, rusty brown, and more gray were lumped
around weathered boulders and pocked by reed-fringed pools scummed
by ice. A few blots of light in the murk were all Jean could see of
the village of Kinlochroy, at the far end of the loch.

But she and Alasdair weren’t walking to the
village, not when the magnificent Scots Baronial pile of new
Dunasheen Castle lay just ahead. The warm glow of its windows and
the red and green fairy lights edging its eaves made the building
into a humongous Christmas card. All it needed to complete the
effect was snow softening the stark, black limbs of the trees
tucked in behind garden walls.

“All right!” Jean pulled Alasdair to a halt.
“Take some photos to go with Fergie’s interview. Look, there’s even
a guy in a red jacket walking out of the courtyard—perfect timing,
very photogenic.”

Muttering something about electricity rates
and Fergie not knowing when to stop, Alasdair raised his camera.
“The interview’s covering the estate, the renovations, the paying
guests and all. You’re not meaning to encourage his fancies and odd
notions.”

“Define your terms. You think not putting
milk in your tea is an odd notion.”

His slate-blue eyes that could be chill as
the North Sea sparkled like a tropical lagoon. A wry crumple only
deepened the graceful curve of his lips.

Jean ignored his silent retort. “Sure, that’s
the deal, your security expertise and my journalistic skills in
return for a New Year’s Eve party and a wedding. The weird stuff is
off the record. It would hardly scare away the customers, though. A
lot of people love weird stuff.
I
love weird stuff. But
Fergie’s your friend, so he gets a free pass. Especially now,
during the Daft Days between Christmas and New Year’s Eve.”

“Especially as we’re all a bit daft, in our
own ways.”

That was one concession, Jean thought, he
would not have made even a few months ago.

Either rain or sea spray drifted across her
face and glasses, making her squint at the suddenly blurry
landscape. But the welcoming windows and cheerful lights still
shone, and with Alasdair at her side she walked toward them.

It wasn’t her step that was springy, it was
the ground she walked on—water, peat, layers of cultivation both
literal and cultural. Skye,
An t-Eilean Sgithanach
, the
wing-shaped isle, a name to conjure history, legend, and the
dubious shores between. She could create multiple articles for
Great Scot, the magazine that was partly her investment and fully
her employment, without getting too close to Fergie’s more marginal
notions, although his notion of making a self-sustaining business
of a Scots Baronial white elephant was the point of the
exercise.