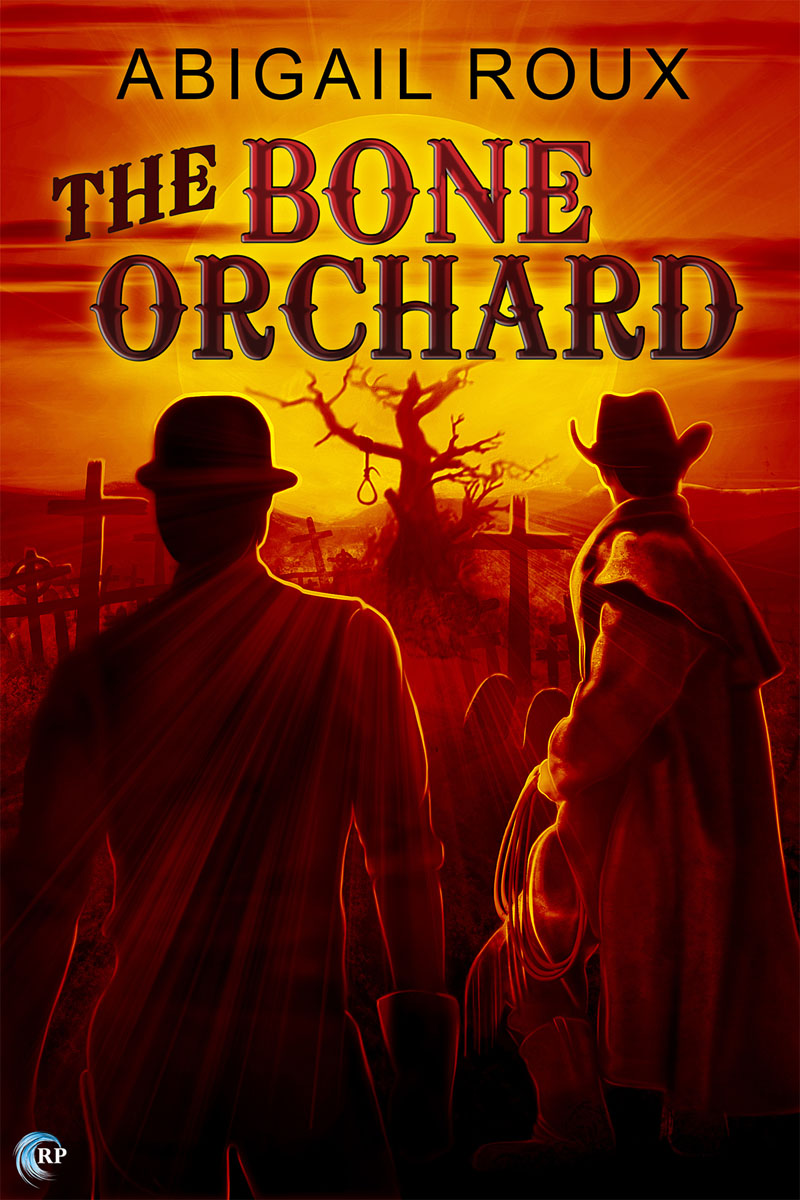 After leaving a trail of terror and death in his wake, the notorious “Missouri” Boone Jennings finally meets his match in San Francisco when US Marshal Ambrose Shaw catches up to him. The story of his capture, and the marshal’s bravery, has already become legend back east by the time Pinkerton inspector Ezra Johns gets off the train from New York City to testify in the murderer’s trial.

When Ambrose is unable to give witness to the evils he’s seen, Ezra becomes their lone hope for putting Jennings in a noose. But if Ezra thinks that’s his biggest problem, he’s got plenty to learn about life—and the afterlife—in the spirited West.

Fortunately, Ambrose is there to assist, and more than happy to oblige Ezra—in the courtroom or the bedroom. He spent his life bringing justice to the Wild West, and if he has a say in it, that’s how he’ll be spending his death too.

To those who are gone but not forgotten.

Marshal Ambrose Shaw shoved through the doors of the Continental Hotel, squinting into the dim interior. He headed for the rowdy saloon, following the sound of the piano, and gave the patrons a once-over before moving toward the bar and the dapper tender behind it.

The man greeted him with a nod, tossed a rag over his shoulder, and came over. “What can I get you, sir?”

“Top-shelf,” Ambrose said, jutting his chin toward the row of bottles above the mirror on the back wall. Anything from below the bar, even in an establishment as fine as the Continental, was sure to make a man blind. As the bartender moved away, Ambrose reached into his vest and pulled out a cigarillo he’d rolled the night before. He placed it between his lips, then patted himself down, looking for a light. He found none, which was why he hadn’t smoked the damn thing earlier. With a sigh, he reached in again for a folded-up piece of paper he’d been carrying with him clear across the country.

He spread it out on the bar, smoothing his fingers over the creases.

The bartender set his glass and bottle beside the paper, then silently lit Ambrose’s cigarillo for him.

“Obliged,” Ambrose said around the cigarello. He tapped the drawing of the man on the paper. “You seen this man hereabouts?”

The bartender raised both brows, then met Ambrose’s eyes again. He shook his head slowly, but his eyes darted to a dark corner of the saloon, to a table that was shielded from the doorway by the player piano.

Ambrose sighed deeply, smoke wafting from his lips. “Is that right?” he murmured.

The bartender’s eyes darted toward the corner again, and he moved away, putting as much distance between himself and Ambrose as the bar back would allow. Leaning to his left, Ambrose could see “Missouri” Boone Jennings in the mirror behind the bar, and he tracked the man’s movements. He took the cigarillo from his lips and set it down, then pushed back his overcoat, revealing the pommel of the six-shooter at his hip.

The saloon cleared almost by magic, with gamblers, grifters, miners, traveling businessmen, drunks, and dancing girls scrambling for cover or slinking away to safety in corners and behind solid tables. Even the piano had gone silent. Ambrose didn’t turn around; to do so would have been deadly. Instead he watched Jennings in the mirror, trying to judge the distance of the reflection.

Jennings stood from the table he’d been drinking at, his feet spread apart, his jacket pushed back to reveal twin sidearms. His fingers tapped the ivory butt of one gun. “You come to take me, Marshal Shaw?”

“That I did,” Ambrose answered. He kept his back to Jennings, almost a dare for the wanted man to shoot him down like a coward. Jennings wouldn’t do that, not in front of people who would tell the tale.

“You been on my dust since St. Louis. Took you long enough, Shaw; I hit the damn ocean before you found me.”

Ambrose smiled sadly. “Had a handful of funerals to attend. You been collecting quite the bone orchard.”

“You find any witnesses to testify to my . . . ownership of that bone orchard?”

“Not any left alive.”

“Last one I saw buried was nothing but a boy.” Ambrose took a gulp of whiskey, then set his glass back down with a clink. “I decided I ain’t going to let you get in front of a judge.”

Jennings moved, his muscles tensing, his hands merely a flash. Ambrose pulled his gun and turned, firing. Bottles behind the bar popped and exploded. The glass in Ambrose’s hand burst into a million fragments. The mirror shattered, filling Ambrose’s vision with glittering shards of light like quartz dust on a sunny afternoon.

Jennings went to his knees, though Ambrose couldn’t say where he’d hit him. Then warmth and pain began to spread through his belly, and the shards of refracting light surrounding him turned blindingly white, brighter and warmer until he could see and feel no more.

Ezra Johns was hot, dusty, and sore. It had taken five rail days to make his way from New York City to San Francisco. After the chilly peaks of the Rocky Mountains and Sierra Nevada range, with stars so large and bright Ezra thought he must have been taken to another world, the heat of the California coast was enough to knock him back.

He stepped out of the carriage in front of the Continental Hotel and Saloon. Down the street, he could see the monstrous frame of the Palace Hotel, where the trial would be held. Just two years old, it was arguably the most luxurious building west of the Mississippi, built in 1875 with all the modern fineries of the time. The Pinkerton Agency would never pay for a room there, though, so Ezra would make do with the Continental.

It would be but a short walk each morning to get there for the trial. Ezra had been summoned to testify against one “Missouri” Boone Jennings, a man wanted for murder as far back east as New York. As many as eleven deaths had been pinned on Jennings, who was notorious for his cruelty and violent nonchalance. None of those eleven murders, and there were probably even more than that, could be proved. None but the Irish dockworker Jennings had beaten to death in the streets of New York City.

Ezra had investigated that murder. He had a leather satchel full of evidence and witness statements. Proof beyond the shadow of a doubt that Jennings was the killer. And it would ultimately be Ezra’s testimony that would put Jennings in a noose.

That was what his superior had told him, anyway, to justify dragging him across the country.

Ezra entered the Continental. The saloon appeared to be under construction, with workers hanging an ornate mirror behind the bar. Ezra gave the dining room and saloon another glance before heading for the proprietor’s desk.

“We have one room available,” the attendant told him, casting a hesitant glance at his ledger.

“Is there a problem?” Ezra wiped down his spectacles so he could read the book.

The man winced and looked around, as if making sure no one else could hear him. “An injured lawman died in that room some time back. Our guests complain of there being . . . spirits.”

“Spirits?” Ezra couldn’t keep the amusement out of his voice. He smiled and gave the attendant a nod. “Well. I’m not opposed to double occupancy, so I’ll take it.”

He received his key and turned down assistance with his luggage, considering he only had his small canvas bag and the leather satchel full of evidence. He didn’t intend to let anyone handle that until it reached the court.

He trudged up the flight of stairs to his room, sighing in relief when he was finally able to close the door behind him and shrug off his frock coat. He’d not been prepared for the warmth out here; he might have to find a mercantile to purchase a summer coat.

The room was a nice one, almost comparable to his accommodations back east. It had a bed large enough for two, a washbasin and a private entrance to a water closet, not one but two armoires, and a sitting area. It was possible this room was the honeymoon suite. Considering the affordable rate, there must have been some powerful lore to keep it from being rented nightly. Ezra didn’t put much stock in spirits or hauntings, but he was grateful for the discount.

He set his bag on the end of the iron-framed bed, but before he could begin unpacking, he heard a scratch at the door. He turned, frowning as he watched the doorknob rattle. After a moment, the door creaked open, and just as Ezra was beginning to second-guess his belief in the afterlife, a man pushed the door open.

He was handsome. Blond, with a well-groomed mustache, a tan that gave evidence of many days spent in the sun, and blue eyes so clear they seemed almost silver peering out from under the brim of his hat.

“Can I help you?” Ezra asked, flustered from the intrusion.

“Name’s Ambrose Shaw.” He pushed the door open wider. His saddlebag was draped over his shoulder. “Man at the front desk said you might not mind sharing a room.”

“Oh. Oh! Of course not.” Ezra gestured to the room, then walked forward and offered his hand. “Ezra Johns.”

Ambrose looked down at his hand and nodded, but he didn’t take it.

“Right.” Ezra backed away to allow Ambrose into the room. He wasn’t sure if the lack of a handshake was supposed to mean something in the west or not, but he was too distracted to be offended. “Ambrose Shaw. You’re a US Marshal, aren’t you? You’re the one who finally brought down Boone Jennings?”

Highlander's Bride (Heart of the Highlander Series Book 1) by Gafford, Deborah
Blind Panic by Graham Masterton
Blood Wild: Paranormal MMF Menage Romance (Wolves on the Prowl Book 3) by Bardsley, Michele
Because the Night (The Night Songs Collection) by Strassel, Kristen
Surrender to Love by Raine English
Stillness and Speed: My Story by Bergkamp, Dennis
Grand Opera: The Story of the Met by Affron, Charles, Affron, Mirella Jona
Drink Your Way to Gut Health by Molly Morgan
Hosker, G [Sword of Cartimandua 09] Hero of Rome by Griff Hosker
The Comedians by Graham Greene