Read The Book of Dragons Online

The Book of Dragons 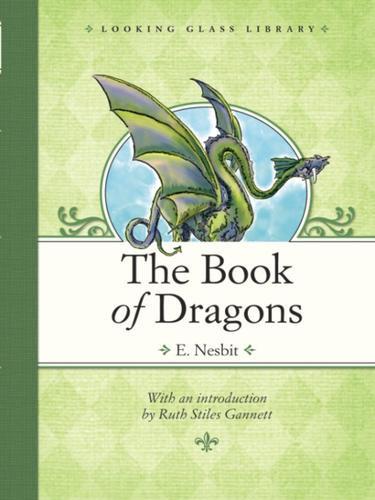 To Rosamund
,
chief among those for whom these tales are told
,
THE BOOK OF DRAGONS
is dedicated
in the confident hope that she
,
one of these days
,
will dedicate
a book of her very own making
to the one who now bids
eight dreadful dragons
crouch in all humbleness
at those little brown feet
.

1.
The Book of Beasts

2.
Uncle James, or The Purple Stranger

3.
The Deliverers of Their Country

4.
The Ice Dragon, or Do as You Are Told

5.
The Island of the Nine Whirlpools

8.
Kind Little Edmund, or The Caves and the Cockatrice

T
hese fantastic tales about princes and princesses, evil kings, poor peasants, trickery and greed, and scary dragons were written over a hundred years ago for English children. In these tales, children are empowered to deal with “reality” in their story world through their bravery, compassion, and knowledge. Also, there are unobtrusive lessons for the reader, to whom the author occasionally speaks.

Most grown-ups and even some children will tell you that there are no such beings as dragons, and never were. This may be true, but then why is it that tales of dragons come from peoples all over the world and have been revered through the ages? I do not know the answer.

Perhaps people have needed stories about heroes who could protect them from powerful kings and witches, all kinds of disaster, and voracious dragons.

Possibly such stories helped people to believe in miraculous rescues from their hard and unsafe lives.

Today, some people like to scare themselves by reading about dragons, knowing there will be a just and happy ending.

Maybe once there were dragons!

It is interesting that dragon stories from many lands often have a lot in common. Dragons are ancient beings, big and strong, but are also able to grow even bigger or smaller and completely change their shape. They usually have scaly wings and long tails, nasty sharp claws, fire-spitting nostrils, and enormous appetites. They enjoy devouring both the good and the bad. They come in many colors, as in these stories, and are not necessarily flesh-and-blood creatures. Besides their strength, dragons may have special powers to cast spells and change the weather.

In these eight tales, you will meet an awesome variety of fierce dragons, and the clever children who must defy and outwit them to find ways out of desperate situations.

You will also read both real and fantastic descriptions of the world’s creation, tides, the aurora borealis, weather, gravity, caves, the North Pole, and English schools of yesteryear; and you will read about how much it matters to be kind and good-hearted.

THE BOOK OF BEASTS

He
happened to be building a palace when the news came, and he left all the bricks kicking about the floor for Nurse to clear up—but then the news was rather remarkable news. You see, there was a knock at the front door and voices talking downstairs, and Lionel thought it was the man come to see about the gas which had not been allowed to be lighted since the day when Lionel made a swing by tying his skipping-rope to the gas-bracket.

And then, quite suddenly, Nurse came in, and said, “Master Lionel, dear, they’ve come to fetch you to go and be King.”

Then she made haste to change his smock and to wash his face and hands and brush his hair, and all the time she was doing it Lionel kept wriggling and fidgeting and saying, “Oh,
don’t, Nurse,” and, “I’m sure my ears are quite clean,” or, “Never mind my hair, it’s all right,” and “That’ll do.”

“You’re going on as if you was going to be an eel instead of a King,” said Nurse.

The moment Nurse let go for a moment Lionel bolted off without waiting for his clean handkerchief, and in the drawing-room there were two very grave-looking gentlemen in red robes with fur, and gold coronets with velvet sticking up out of the middle like the cream in the very expensive jam tarts.

They bowed low to Lionel, and the gravest one said:

“You will be crowned this afternoon,” said the grave gentleman who was not quite so grave-looking as the other.

“Your Nurse will be removed to the palace later. No, never mind about changing your suit; the royal robes will cover all that up.”

The grave gentlemen led the way to a coach with eight
white horses, which was drawn up in front of the house where Lionel lived. It was No. 7, on the left-hand side of the street as you go up.

Lionel ran upstairs at the last minute, and he kissed Nurse and said:

“Thank you for washing me. I wish I’d let you do the other ear. No—there’s no time now. Give me the hanky. Good-bye, Nurse.”

“Good-bye, ducky,” said Nurse; “be a good little King now, and say ‘please’ and ‘thank you,’ and remember to pass the cake to the little girls, and don’t have more than two helpings of anything.”

So off went Lionel to be made King. He had never expected to be a King any more than you have, so it was all quite new to him—so new that he had never even thought of it. And as the coach went through the town he had to bite his tongue to be quite sure it was real, because if his tongue was real it showed he wasn’t dreaming. Half an hour before he had been building with bricks in the nursery; and now—the streets were all fluttering with flags; every window was crowded with people waving handkerchiefs and scattering flowers; there were scarlet soldiers everywhere along the pavements, and all the bells of all the churches were ringing like mad, and like a great song to the music of their ringing he
heard thousands of people shouting, “Long live Lionel! Long live our little King!”

He was a little sorry at first that he had not put on his best clothes, but he soon forgot to think about that. If he had been a girl he would very likely have bothered about it the whole time.

As they went along, the grave gentlemen, who were the Chancellor and the Prime Minister, explained the things which Lionel did not understand.

“I thought we were a republic,” said Lionel. “I’m sure there hasn’t been a King for some time.”

“But hadn’t my great-great-however-much-it-is-grandfather a crown?”

“Yes, but he sent it to be tinned over, for fear of vanity, and he had had all the jewels taken out, and sold them to buy books. He was a strange man; a very good King he was, but he
had his faults—he was fond of books. Almost with his latest breath he sent the crown to be tinned—and he never lived to pay the tinsmith’s bill.”

Here the Prime Minister wiped away a tear, and just then the carriage stopped and Lionel was taken out of the carriage to be crowned. Being crowned is much more tiring work than you would suppose, and by the time it was over, and Lionel had worn the royal robes for an hour or two and had had his hand kissed by everybody whose business it was to do it, he was quite worn out, and was very glad to get into the palace nursery.

Nurse was there, and tea was ready: seedy cake and plummy cake, and jam and hot buttered toast, and the prettiest china with red and gold and blue flowers on it, and real tea, and as many cups of it as you liked. After tea Lionel said:

Red Rose by J. C. Hulsey
Getting Some Of Her Own by Gwynne Forster
The Magnificent Elmer by Pearl Bernstein Gardner, Gerald Gardner
Something Like Beautiful by asha bandele
The Droitwich Deceivers by Kerry Tombs
Cheryl Holt by Total Surrender
Collected Kill: Volume 2 by Patrick Kill
Liz Carlyle - 05 - Present Danger by Stella Rimington
The Headsman by James Neal Harvey
The Progeny by Tosca Lee