Read The Book of Revenge Online

The Book of Revenge 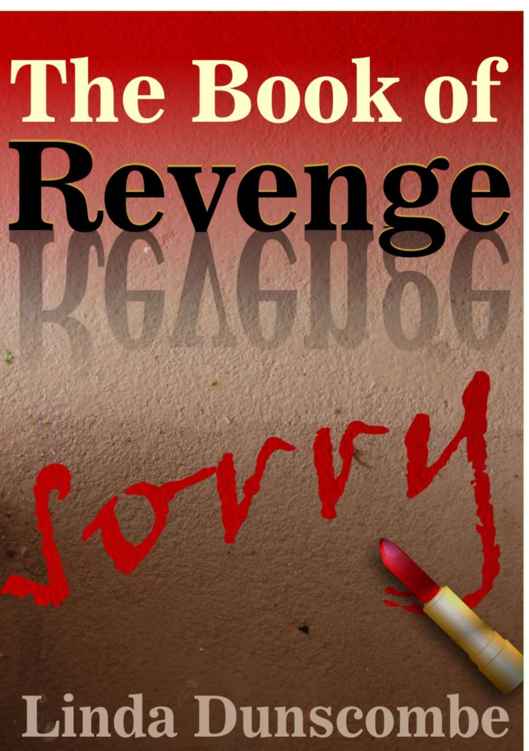 The Book of Revenge
A Crime Novella
Linda Dunscombe

I had never killed anyone before.

He was on his knees on the dirty floor. The place was a shit hole. I could smell his fear and I hadn’t expected that. I’d read somewhere that during extreme stress all your senses go into hyper drive. It was true. I was acutely aware of every sound and every movement. I had a strange sensation of time slowing down; like every second lived lasted a minute.

The man smelt of sweat and urine and something else, something that I knew instinctively was the stench of fear, some primitive chemical signal sent out by his body.

I threw the lipstick onto the floor. He glanced up at me, just briefly. I nodded my head towards it. So he picked it up and removed the small piece of paper wrapped around it with an elastic band. His hands were shaking violently as he unfurled it and read. He looked up at me again, but without making eye contact. His gaze focused on my chin and I felt a surge of anger. Was he such a coward that he couldn’t even look into the eyes of his executioner?

‘You want me to write?’ he said, his voice little more than a rasping sound.

I pointed to the floor. He took the lipstick lid off and fiddled for a few seconds until he managed to twist the tip out enough to do the job.

He started to form the letters; it wasn’t easy on the cheap, grimy lino. He was working against months, maybe years of ground-in grease and dirt. The lipstick smudged and he was struggling to keep his hand steady.

Noises from the street outside were making me nervous. Drunken shouts, cars, I even heard the sound of a siren. But I had to keep calm, keep control. It was a rough neighbourhood. The part of my brain still capable of being rational, knew that the noises were normal. I took a few deep breaths, forced myself to be strong. My hand holding the gun was steady.

I could do this.

He finished writing and looked up at me again. Hope was in his eyes. He’d completed the task. Surely his reward would be mercy.

But I had no mercy in my soul.

I took aim and I fired.

In the fraction of a second it took for the bullet to make contact with his head, I saw his hope turn to disbelief and then to terror and finally... Well, I’m not sure what the final fleeting emotion or thought was. I hope it was recognition, understanding or acceptance.

I was frozen for a few seconds. Hit by the enormity of what I had just done. But once again my rational brain saved me. On autopilot, I picked up the elastic band and the note. Careful not to step in any blood, I quickly left the flat.

I don’t think anybody saw me leave. I heard a door open in the flat above me and footsteps on the stairs. But I didn’t pause to look back. Outside on the street I removed the balaclava and walked quickly past the row of rundown terrace houses and round the next bend. I’d gone little more than a hundred yards before the shaking started, and just a few steps later I was on my knees throwing up into the gutter.

I felt a little better then.

The streets were fairly empty. It was late, or early, technically a new day. I blended in. I looked like just another drunk, staggering home. Nobody took any notice of me.

One more corner and I would be safe.

Was I pleased? Probably not. In all my mental practice runs, I felt a huge surge of emotions, including satisfaction and elation. But the reality was a bit flatter. I did what had to be done. I wanted him to suffer, to be sorry, maybe even to plead or beg for his life. But in reality he had been a pathetic rat, trapped in a rat hole. I almost felt I had done both him and society a service by ending his wretched, worthless existence, and that wasn’t what I wanted. I needed to feel that I had robbed the man of a life worth living. That depriving him of a future was a fair judgement and a fitting punishment.

I knew I was being hard on myself. All the anticipation, all the preparation, maybe an anti-climax was inevitable. He was only the first. Hopefully the next from the list would satisfy my need for revenge.

Matt opened his eyes and reached for the bedside light. He found the switch and groaned as he squinted in protest. He picked up the ringing mobile phone.

‘Jen it’s ...’ he glanced at the alarm clock, ‘the middle of the sodding night. If someone isn’t dead, then you soon will be.’

Hearing her response he ended the call and with resignation he climbed out of bed. An empty bottle of whisky was on the floor and he winced as he stubbed his toe on it. He picked the phone up again and pressed speed-dial. ‘Jen? Better send a car...’

Matt climbed into yesterday’s clothes. He picked them up from the bedroom floor with no memory of dropping them there. He caught a glimpse of himself in the wardrobe mirror and then wished that he hadn’t. He ran his fingers through his hair. It didn’t help. ‘Bugger,’ he groaned.

He left the bathroom looking much the same as he had when he entered. But at least his mouth didn’t feel like he’d swallowed sawdust anymore. He pushed open the door to the spare room. It was empty. Doubting the evidence of his own eyes, he switched the light on. The bed was made and untouched. He wondered if he should worry, be concerned for her safety. Her behaviour had been erratic lately. But she was an adult and although he was still her husband, he certainly wasn’t her keeper. He switched the light out and closed the door.

Downstairs, Matt put the kettle on and checked through the window that the car wasn’t already waiting. He knew he had little chance of making and drinking a coffee before his lift arrived. But he needed caffeine and it was worth the try.

He spooned in the sugar and stirred. What he really wanted to do was add a dash of brandy to kick start his brain, but he resisted. He managed a sip before he heard a car pull up outside. He took a long slurp and burnt his mouth. The day, or more accurately, the night, was not going well.

The front door opened. His tired and fuzzy brain registered that it was wrong; the driver wouldn’t have a key. Matt hurried into the hall. His wife staggered through the door, smiled inanely at him and then promptly threw up on his shoes.

Matt climbed out of the car. Jen Tyson had everything under control. She was young, ambitious, beautiful and bright. In Matt’s opinion she represented all that was unjust in the world. How was it fair that one person was given everything? And why did it have to be her? It wasn’t even that he didn’t like her. Since arriving in town three months ago, she had settled into the job. She was friendly and keen, pleasant and never rude. The problem was his, he knew that. All her bright shiny perfection, made him feel jaded, bitter, and, if brutally honest with himself, a failure.

The flat was in a rundown converted Victorian terrace, on the wrong side of town. Not that there was really a right side of town. Bidbury was one of those places that prosperity forgot to touch. Anyone sensible who managed to make a success of life got out the minute they could, and if they stayed they moved to the villages on the outskirts of the town. But even by Bidbury standards this was the bottom of the neighbourhood pile.

The area was cordoned off. Police cars, blue lights, suited and booted Socos going about their business. Jen waved him in. Despite the early hour she was immaculate and perky. Matt groaned. He seemed to be doing a lot of that lately. He looked around the room with the eyes of a man who’d seen it all before. Humanity in all its foul glory. He wrinkled his nose, an involuntary response to the smell of violent death and looked down at the body bathed in a pool of blood on the dirty floor.

Matt looked at Jen. She pointed to the smudged writing on the floor. ‘Think that’s what it says.’

A uniformed officer spoke from behind them. ‘Odell, sir.’

Matt swung round to face the officer. ‘Adam Odell?’

The officer checked his notebook and nodded.

‘You know him Gov?’Jen asked.

Matt kept quiet, not ready to answer. Adam Odell. He ran the name through his mind. Looking at the corpse on the floor and the grotty hole he apparently lived in, it was hard to believe the man had once been a promising athlete.

‘Well, dump like this. Nothing worth nicking, it had to be drugs really, didn’t it?’ She said. ‘I mean, why else would anyone kill a loser like him?’

Matt didn’t answer. He knew a small voice kept under lock and key in some corner of his brain might have some view on the matter. But the door restraining that voice was staying firmly shut.

‘Yeah, almost certainly drugs.’ He said flatly, before turning to the uniformed officer. ‘Any sign of a break -in?’

‘No sir. Whoever did this apparently walked in through the door.’

‘Witnesses? Surely someone heard the shot? Who found him?’

‘Guy upstairs.’ Jen replied, ‘he heard a noise, came down to investigate. The door was open and he found the body, but he didn’t see anyone leave.’

Matt took one last look around the sad, grubby room. Then he looked at Jen. ‘First light, check all the neighbours. Get the lippy to forensics, pull all the data on Odell and find out his known associates...’

Jen looked satisfied. ‘Treat it as drug related then?’

‘For now,’ Matt answered, not totally convinced. He headed for the door.

‘Are you going to the station, Gov?’

Matt held his tongue and left the flat. As he walked towards the squad car a rumble of thunder preceded the first drops of heavy rain. He was tired, and a bit hung over. But it wasn’t really sleep he needed. He knew he had been avoiding reality for far too long. It was time he confronted his wife. Time they sat down and talked. He had a strong feeling that he wasn’t going to like what he heard.

A removal van was parked on the drive. A sold sign was in the garden. It was a pleasant house, not rich or ostentatious, but a comfortable three bedroom detached. Liz Bryant was directing the removal men as they maneuvered her cream sofa through a narrow front door. She was watched by the man in the next garden who was mowing the lawn while his wife pretended to weed the immaculate flowerbeds.

Los huesos de Dios by Leonardo Gori
The Divide (The Divide Series Book 1) by Kaitlyn Kroner
The Ghost Who Loved Diamonds by Bobbi Holmes
HolidayHangover by Kelli Scott
3stalwarts by Unknown
Nothing But Trouble by Trish Jensen
In Space No One Can Hear You Scream by Hank Davis
A Ring Through Time by Pulman, Felicity
the Man from Skibbereen (1973) by L'amour, Louis
At Any Turn (Gaming The System) by Aubrey, Brenna