Read The Book of the Bizarre: Freaky Facts and Strange Stories Online

The Book of the Bizarre: Freaky Facts and Strange Stories 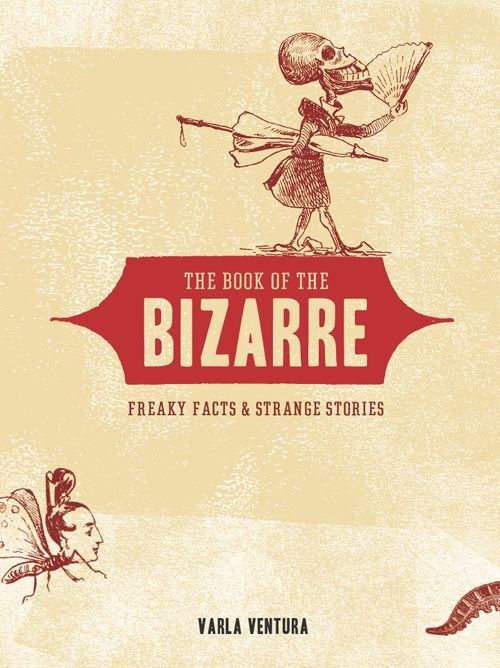 FOR THE WICKED, THE WEARY,
AND THE LOVERS OF THE STRANGE

Copyright © 2008 by Weiser Books. All rights reserved. No part of this publication may be reproduced or transmitted in any form or by any means, electronic or mechanical, including photocopying, recording, or by any information storage and retrieval system, without permission in writing from Red Wheel/Weiser,
LLC
. Reviewers may quote brief passages.

Library of Congress Cataloging-in-Publication Data is available upon request.

Bizarre but True Facts about Historical Figures,
and Oddities from Today and Yesterday

Corpses on Campus, Voices from Beyond the Grave,
Strange Cemetery Facts, Spooky Specters, and Other
Ghostly, Ghastly, and Gothic Goings On

8. SYMPATHY FOR THE DEVIL:

Weirdest Laws in the World, Hoaxes, and Conspiracy Theories

To Hex, Lambast, and Bewitch

THE MAGICAL SKULL OF DOOM

Very few objects have engendered as much controversy or imaginative conjecture as the Magical Skull of Doom, a crystal skull life size in its circumference and likeness to the human head. Shrouded in mysterious and unknown origins, there are countless tales of strange phenomena associated with it. Some believe it is haunted, others believe it is cursed, and still others believe it is of extraterrestrial origin.

As legend has it, the skull first turned up in the 1920s under an altar in the archaeological dig of the ruins of Lubaantun, the great Mayan city in what is now known as Belize. Some of the greatest arguments occur over whether or not the Magical Skull of Doom is pre-Columbian. While other crystal skulls have been discovered in Central American ruins, none can match the Skull of Doom for its perfection of craftsmanship and likeness to a real skull. Perhaps the biggest mystery of all is that the crystal from which the skull was carved appears to be derived only from California, not the Mayan territory.

Frederick Mitchell Hedges, one of the archaeologists who was present at the discovery, is rumored to have planted it on the occasion of his adopted daughter Ann's
birthday, the day of the skull's discovery. It has also been suggested that the skull was never in Lubaantun. Nevertheless, Hedges proclaimed that the skull was “used by the high priest of the Maya to concentrate on and will death,” that it was “the embodiment of all evil,” or that people who scoffed at the skull have died or “have been stricken and become seriously ill.” Hedges also attributed to the large hunk of crystal the moniker of “the Skull of Doom” and greatly aided in the swirl of rumors, mist, and myth that has continued to enshroud it.

Frank Dortland, a highly reputable art restorer and one of the later owners of the skull, kept and studied the Magical Skull of Doom. Dortland swore that the skull gave off an “elusive perfume,” that it seemed to emanate a sound similar to bells chiming, and that it could change color at will. He also claimed that it sometimes was filled with ever-changing, cloudy images and at other times it contained crystal-clear images of temples, mountains, and myriad other striking scenes. Other folks who observed the skull when it was under Dortland's watch said a hazy aura would occasionally enshroud it. Still stranger are the reports of physiological phenomena, such as a quickening of the pulse, muscle spasms in the legs and arms, and even eye twitching, affecting people who were near the skull.

Maybe people are fascinated with the Magical Skull of Doom because it is simple in its inherent magnificence. It looks like it was formed whole, and it bears nearly no sign of tool marks. The artist who created this skull was a master of the highest order—the handiwork is nothing short of spectacular. Just polishing the skull would have been a labor of some years. The proverbial icing on the cake is especially fascinating: the skull is crafted in such a way that light collects and refracts in the eye sockets, causing them to emit an eerie glow.