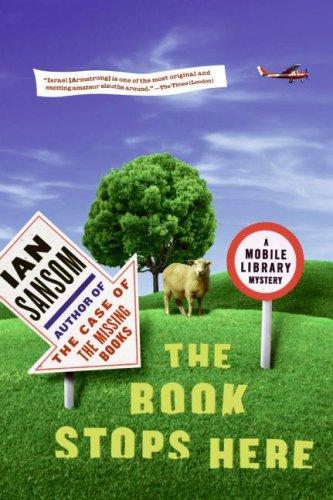 For the Group
Contents
1
'I resign,' said Israel.
2
'Sorry, Linda,' he said when they arrived. It was his…
3
The meeting had ended, as was traditional at Mobile Library…
4
He was packing! Israel Armstrong was packing up and getting…
5
They very nearly missed the ferry.
6
Israel vomited continually and consistently for most of the journey…
7
Israel's mother was not a good cook. It was a…
8
For a long time he couldn't get to sleep. First…
9
Stolen cars in London are of course ten a penny…
10
Israel was glad that he'd managed to persuade his mother…
11
The address they'd been given was just by Wandsworth Bridge.
12
Gloria still hadn't phoned. Or texted. Or indeed turned up…
13
'This is madness,' said Ted.
14
When Israel and Ted arrived back at the site the…
15
Britain's premier—and only—convention of mobile librarians, organised by the Chartered…
16
The police decided that under the circumstances Israel and Ted…
17
They were driving back through England in silence.
Acknowledgements
About the Author
Other Books by Ian Sansom
Credits
Cover
Copyright
About the Publisher
1

'Of the whole thing. This place! The—'

'Exactly!' said Israel. 'The people! Exactly! The people, they drive me—'

'Exactly! You took the words right out of my mouth.'

'Aye, well, you might've mentioned it before,' said Ted.

'You're up to high dough with it.'

'No,' said Israel. 'No. I don't even know what it means,
up to high dough with it
. What the hell's that supposed to mean?'

'I'm going to hand in my resignation to Linda.'

'Before the meeting today.'

'Before she has a chance to trick me out of it again.'

'You've time for a wee cup of coffee at Zelda's first, mind? For auld time's sake?'

Israel looked at his watch.

'Meeting's not till three,' said Ted.

'What day is it?' said Israel.

'What's the scone on Wednesdays?'

Israel huffed. 'All right,' he said. 'But
then
we need to get there early. I am definitely,
definitely
resigning.'

They'd had this conversation before, around about midweek, and once a week, for several months now, Israel Armstrong BA (Hons) and Ted Carson—the Starsky and Hutch, the Morse and Lewis, the Thomson and Thompson, the Don Quixote and Sancho Panza, the Dante and Virgil, the Cagney and Lacey, the Deleuze and Guattari, the Mork and Mindy of the mobile library world.

Israel had been living in Tumdrum for long enough—more than six months!—to find the routine not just getting to him, but actually having got to him; the self-same rainy days which slowly and silently became weeks and then months, and which seemed gradually to be slowing, and slowing, and slowing, almost but not quite to a complete and utter stop, so that it felt to Israel as though he'd been stuck in Tumdrum on the mobile library not just for months, but for years, indeed for
decades
almost. He never should have taken the job here in the first place; it was an act of desperation. He felt trapped; stuck; in complete and utter stasis. He felt incapacitated. He felt like he was in a never-ending episode of
24
or a play by Samuel Beckett.

'This is like
Krapp's Last Tape
,' he told Ted, once they were settled in Zelda's and Minnie was bringing them coffee.

'Are ye being rude about my coffee?' said Minnie.

'In Enniskillen there,' said Minnie. 'The school, sure. That's where he went to school, wasn't it?'

'
Riverdance
,' said Ted. 'Most popular Irish show of all time.'

'Och,' said Minnie. 'And who was the other fella?'

'That went to school there, at Portora?'

'Ach, sure ye know. The homosexualist.'

Ted was busy emptying the third of his traditional three sachets of sugar into his coffee. 'Aye.'

'Zelda's nephew went there,' said Minnie. 'The one in Fermanagh there.'

'And your scones are just coming,' said Minnie.

'I know,' said Minnie. 'It's what people want though, these days.'

'Aye, and so do a lot of other things,' said Ted darkly.

'It is a shame, really,' said Minnie. 'Sure, everybody used to smoke.'

Israel stared at the yellowing walls of the café as Ted and Minnie reminisced about the great smokers of the past: Humphrey Bogart, Lauren Bacall, Bette Davis, Winston Churchill, Fidel Castro.

'Was he not a druggie?' said Minnie.

'Never heard of him,' said Minnie.

Sometimes Israel wished he was a gentleman detective, far away from here, with a cocaine and morphine habit, and a slightly less intelligent confidant to admire his genius. Or, like Sam Spade, the blond Satan, pounding the hard streets of San Francisco, entangling with knock-out redheads and outwitting the Fat Man. Instead, here he was in Zelda's, listening to Ted and Minnie and looking up at old Christian Aid and Trócaire posters, and the dog-eared notices for the Citizens Advice Bureau, and the wilting pot plants, and the lone long-broken computer in the corner with the Blu-Tacked sign above it proclaiming the café Tumdrum's Internet hot spot,
THE FIRST AND STILL THE BEST
, and the big laminated sign over by the door featuring a man sitting slumped with his head in his hands, advertising the Samaritans: 'Suicidal? Depressed?'

He sipped at his coffee and took a couple of Nurofen. The coffee was as bad as ever. All coffee in Tumdrum came weak, and milky, and lukewarm, as though having recently passed through someone else or a cow. Maybe he should take up smoking, late in life, as an act of flamboyance and rebellion: a smoke was a smoke, after all, but with a coffee you couldn't always be sure. The coffee in Tumdrum was more like slurry run-off. He missed proper coffee, Israel—a nice espresso at Bar Italia just off Old Compton Street, that was one of the things he missed about London, and the coffee at Grodzinski's, round the corner from his mum's. He missed his friends, also, of course; and his books; and the cinema; a nice slice of lemon drizzle cake in the café at the Curzon Soho; and the theatre; and the galleries; and the restaurants; it was the little things; nothing much; just all the thriving cultural activities of one of the world's great capital cities.

'Just remind me,' he said to Ted, once Minnie had gone off for the scones. 'Why do we come here?'

'It's the only place there is,' said Ted.

'Yes,' said Israel, amazed. 'I know, but…it's, like…' He took another sip of his coffee. 'They don't even serve proper coffee.'

'It's that sort of chicory stuff, isn't it?' said Israel, licking his lips, trying to figure out what it was, the unpleasant burnt taste and the feral, sicky smell, like something someone had just brought up. 'That's what it is. I think it's that…what do you call it?'