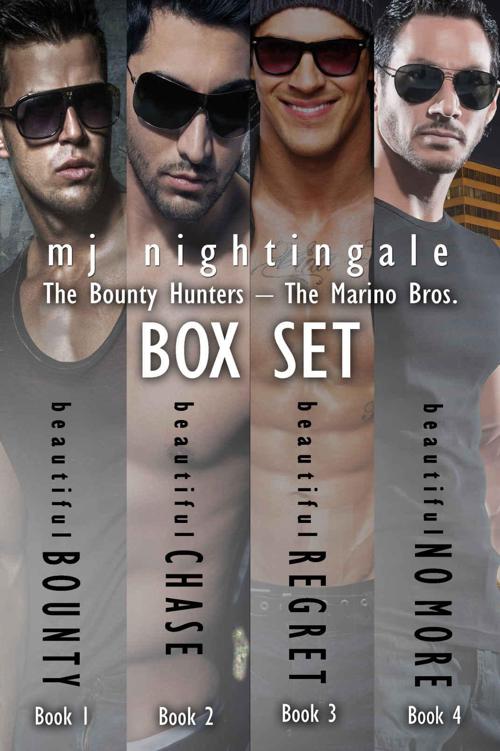 The Bounty Hunters – The Marino Bros.

This is a work of fiction. Names, characters, businesses, places, events, and incidents are either the products of the author’s imagination or used in a fictitious manner. Any resemblance to actual persons, living or dead, or actual events is purely coincidental. This book is licensed for your personal enjoyment only.

This book may not be re-sold or given away to other people. If you would like to share this book with another person, please purchase an additional copy for each person you share it with. If you are reading this book and did not purchase it, or it was not purchased for your use only, then you should return it to the seller and purchase your own copy. Thank you for respecting the author’s work.

This book is intended for a mature audience of eighteen and older.

Book 1 of The Bounty Hunters (The Marino Bros.)

To my readers. Your support means everything.

To MaryAnn. Your friendship is golden.

R
onnie knew she
was drunk because this was just feeling so good. She needed to stop him. But somehow she couldn’t. He smelled so damn good. The cologne, the sea breeze, the wind, and his tongue trailing down her neck had her senses spiraling. That and the three glasses of champagne she had consumed. His lips and teeth nuzzled her neck, little nips that felt like tiny explosions. His hand slid up her rib cage. She felt the timeless exploration under her breast as he tested its weight. He gently squeezed, and then flicked her nipple beneath the thin material of the bridesmaid gown she wore. He pulled the cup down and a cool blast of night air hit her before his mouth descended on the tiny bud. His mouth was hot. Oh yes! His tongue divine as it titillated her even further. She was the opposite of senseless. She was on fire.

Nikko couldn’t believe his luck. The blond beauty had given him the cold shoulder whenever their paths crossed. But, the little ice princess had warmed up to him. All it had taken was a few drinks, a few dances, and a few suggestions whispered in her ear. He murmured his appreciation around the mouthful of the most amazing breasts he had ever seen in his twenty six years. This little spitfire with the snapping brown eyes had continued to ignore him throughout the ceremony. But at the reception, she loosened up. Let her hair down so to speak. Once he got her on the dance floor, and showed her a few moves, she came undone and began to relax. He liked her like this. Very much.

“Oh God!” she whimpered as he circled her nipple with his tongue and then gently pulled on it with his teeth. She was tugging on his dark hair, pulling him closer, showing him her true nature. She wanted this, and he was more than happy to comply.

They met two weeks ago at the rehearsal dinner for his cousin’s wedding. From that moment, he knew he wanted her, underneath him, on top, he didn’t care. She was every man’s wet dream even though it seemed like she didn’t know it. And right now, she was making one of his fantasies come true, up against a palm tree on the beach in a relatively secluded alcove. She was pushing against him, craving the contact. There was no denying he relished it. And he thanked his lucky stars, because he wanted her, badly. His cock had been at attention all through their dances. Now, it was straining against his black dress pants needing its own gratification.

But, he meant to please her first. She was leaning against the coarse bark of a skinny palm, on the beach where hours earlier his cousin, Victor, wed his lovely bride, Monica. His free hand snaked up her thigh. It was shapely. The girl’s legs were defined, hard under the smooth surface. He could feel her muscles tremble under her silky skin as he slid his hand up the inside of her leg. He cupped her, and again she pushed into his touch. Not one to deny anyone their pleasure, least of all himself, he felt Ronnie part her legs and slid a finger inside. She was already aroused, and wet. He began to flick her clit as she squirmed in time to his ministrations.

“Oh God, Nikko . . .,” she murmured, “that feels so . . .” Her words were lost as he left her breast to claim her sweet mouth. He explored and used his tongue to plunder it. She tasted sweet, and he liked it. He couldn’t wait to explore her further. Ronnie continued to respond to him, grinding her tight little body closer and using her tongue to match him stroke for stroke.

“Have you seen Veronica?”

They both froze when the night sounds were suddenly broken by her mother’s worried voice. Although they were in a clump of palm trees along one of the winding paths that ran along the beach, and it was full dark, the lights along the path could reveal them if she continued to come forward. He and Ronnie had come out for a breath of air, and wandered several hundred yards away from the tent that had been set up for the reception. The alcove was well out of the way of passersby or so they thought. Nikko was frustrated and so damn angry at himself for not taking her to his car, or going even further down this stretch of private secluded beach owned by the hotel that hosted the wedding.

“Your daughter?” another voice responded, a bit further away but getting closer.

“You’ve got to stop!” Ronnie whispered, pushing his hands away and pulling up the top of her dress, covering herself.

Great! Nikko fumed. Just perfect! He began to adjust his clothes quietly, yet inside he fumed.

“Yes, I saw her leave with Nikko about twenty minutes ago. They haven’t returned,” a nervous Louisa murmured, her voice carrying on the night air.

“I just came from the restrooms and I didn’t see her over there,” Brenda, Monica’s sister’s new mother-in-law, replied. “Shall we go look the other way? I’m sure they just went for some fresh air. They seemed to be getting quite a workout on the dance floor.” Brenda’s voice took on a positive note trying to ease Ronnie’s anxious mother.

Yes, go look the other way, Nikko thought. His cock was still hard, and the beautiful blond before him with that crazy purple streak in her hair just might consider letting him finish what they had started. He began to push her back towards the tree. His hand found her breast once more and his lips found her mouth. He began to use his tongue to make magic again.

Hearing her mom’s voice echo in the darkness brought a moment of clarity to her fuzzy mind, but just a moment. Nikko was that good. He knew what he was doing and soon Ronnie found herself focusing only on the sensations he evoked in her.

Ronnie loved how this amazingly hot man made her feel, but a small part of her mind, the part that was coherent, knew her mother would be back. The paths did not go that far, and once her mom searched all the way down to the south beach, she would double back and go north. Reluctantly, Ronnie pushed Nikko away from her and broke the kiss.

“We can’t. . .” she started to speak and then she saw the pained expression on his face.

He pulled back a few inches and looked at her to see if she was serious. She was. “You’re kidding me, right,” he fumed. Her expression remained firm. “Just wonderful,” was his frustrated response. His hand whipped to his head, pushing back a stray lock of black hair.

Stark Pleasure; the Space Magnate's Mistress (The LodeStar Series) by Cade, Cathryn
All-Night Party by R.L. Stine
Kicked Out by Beth Goobie
The Truth of the Matter by Robb Forman Dew
Larissa Learns to Breathe by Ruby Laska
On The Ropes by Cari Quinn
Jazz Moon by Joe Okonkwo
Whole Pieces by Ronie Kendig
For King and Country by Annie Wilkinson
Empire of the East by Norman Lewis