Read The Boy Who Went to War Online

The Boy Who Went to War 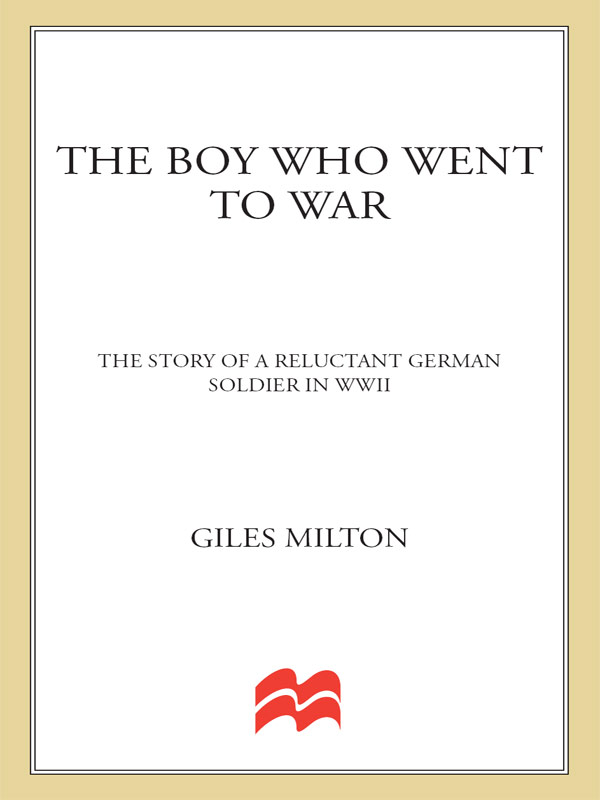 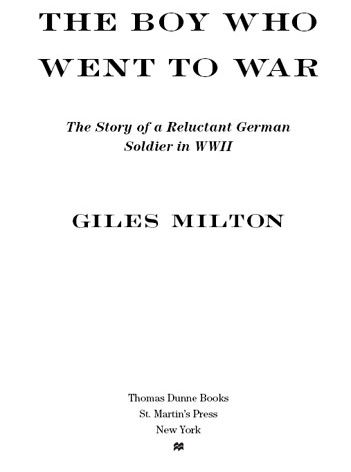 âI'd rather be anywhere in the world.'

Wolfram, Ukraine, 1942. Letter to his parents

âIt is not enough for people to be more or less reconciled to our regime, to be persuaded to adopt a neutral attitude towards us; rather, we want to work on people until they have capitulated to us.'

2 Enemy of the State

3 A Visit from the FÃ¼hrer

9 A Matter of Life or Death

11 Slaughter from the Air

W
olfram: The Boy Who Went to War
was born out of an incident that might have been amusing, had it not been so disquieting.

My seven-year-old daughter, Madeleine, had been set a school project to design an heraldic shield that represented the most important elements in her family background.

Aware that one set of her grandparents was German, she proudly decorated her shield with the only German symbol she knew: a giant swastika.

My wife was horrified and swiftly suggested that she change it but this left Madeleine perplexed. She was proud of her German roots and wanted to celebrate the fact in her heraldic shield. She knew nothing of the swastika's evil associations. To her innocent eyes, it meant nothing bad.

We knew that it would be only a matter of time before Madeleine and her sisters would discover the horrors of the Third Reich. They would also soon discover all the shibboleths and stereotypes that people held about Germany.

Would they therefore choose to distance themselves from their German roots?

To do so would be sad and misplaced. Their German grandfather had an extraordinary wartime story to tell: one that overturned all the clichÃ©s.

The war and the Third Reich were rarely mentioned when I stayed with my parents-in-law at their apartment in Paris. For years after first meeting Wolfram, I had little idea about what he had done during the war. I was reticent about asking any questions. Wolfram is a deeply private person and I had no wish to intrude on that privacy.

Yet he loved to talk, especially in the evenings when dinner was finished and a bottle of rare, home-distilled
kirschenwasser
was brought to the table. He would speak about Swabian folk art, Byzantine icons and his footsore pilgrimage through Serbia and Kosovo in the 1950s. These were some of the subjects that had fired him with enthusiasm and inspired his life as a celebrated artist.

He talked with great intensity and dynamism â vivid stories that were gilded with the rich experience of a life-time's reading. One anecdote would spill into another, colourful and immediate, until the evening became a kaleidoscopic voyage into another world.

Kandinsky, the Russian hymnographer Kovalevsky and the soaring peaks of the high Wetterstein: one minute I'd be standing in the glittering twilight of an Athonite monastery, the next I'd find myself traipsing over the ice-bound crag of the Bavarian Zugspitze.

It was my daughter's swastika incident that led me, tentatively, to ask Wolfram about his childhood during the Third Reich. He seemed surprised that I was interested: after all, it was all a long time ago and it had not been the happiest time of his life.

He nevertheless began to answer my questions, remembering events with all the clarity of an eyewitness, his perception having been sharpened by his artistic powers of observation. With his heightened visual memory he was able to transport me in an instant to the places he had been: Brest-Litovsk, the Crimea, the beaches of Normandy.

I found myself listening to a story that had moments of horror and profound darkness, but was also extraordinarily touching and poignant. It proved a revelation: I had never considered the Second World War from a German perspective.

And thus, slowly, the book was born. Wolfram described at length what it was like to grow up under the Third Reich, talking into my ever-turning Dictaphone. He spoke in long monologues: he has never cared for interruptions lest he lose his train of thought. Yet they were monologues from another world â one that was infinitely more sinister than I had ever imagined.

Wolfram told me how he had always dreamed of being an artist, even when he was a young boy. His artistic dreams would keep him alive on the Russian front and sustain him during his terrible months in Normandy in 1944. Scarcely had he been imprisoned by the Allies than he was able to resume his sculpting, having made an ad hoc chisel from a stolen metal bed-slat.

Life was too precious to squander in the years that followed the war. Wolfram returned from the battlefront and consecrated his life to his art. His Orthodox iconostasis, painted in the 1950s, can still be seen in the Russian church in DÃ¼sseldorf.

His more recent work â semi-abstract watercolours â now hang in national museums and are eagerly sought after by private collectors. Wolfram is now eighty-six and he still paints every day.

My daughters have now learned that the Third Reich committed unspeakable atrocities in the name of the FÃ¼hrer. They also know that the swastika stands as a symbol of mass murder.

However, they can take a quiet pride in their German ancestry for they have learned, too, something that they have never been taught at school: that even in times of exceptional darkness, when morality has been twisted and defaced beyond recognition, there remains a brilliant spark of humanity that can never be totally extinguished.

One of those sparks was carried by their grandfather.

The fighter-bombers appeared from nowhere.

Wolfram and his comrades were making their way along a narrow country lane in Normandy when there was an ominous rumble in the sky to the east. They scarcely had time to look upwards before scores of Allied aircraft were upon them, screaming in low and fast towards their exposed positions. They were flying in so close to the ground that their underbellies were almost touching the treetops.

Wolfram, a wireless operator serving with the 77th German Infantry Division, looked for cover, dropped his communications equipment and flung himself into a nearby ditch, as did the hundreds of men around him, scattering in panic as they sought somewhere to hide.
Schnellâ¦schnell! Quick! Take cover!

There was no time to think about firing back, nor even to unharness the horses pulling the artillery. They were whinnying in panic as the first of the machine-guns burst into action from above, unleashing a hail of deadly fire.

Wolfram buried his head in his arms as the opening salvo exploded all around him. The ground shuddered and jolted as heavy weaponry thumped into the soil. It was like a giant fist punching the ground. Explosion after explosion. Thump â thump â thump.

A mortar landed close by, flinging upwards a shower of mud. Machine-gun fire zipped across the country lane, twanging as it hit the metal shafts of the stalled artillery. Shrapnel and glass were sent flying through the air.

The blitz of fire came to a temporary halt, bringing a few seconds of silence. Wolfram briefly lifted his head as the planes traced a circle in the sky and was appalled by the scene of destruction around him. The ground was on fire, strewn with the dead and the dying. There were bodies everywhere.

A young student artist, with a powerful visual memory, he found himself gazing on a canvas that would remain with him for ever. His comrades lay wounded and bleeding, their bodies punctured by bullets, their limbs torn to shreds by shards of metal. The horses, still harnessed to the big field guns, let out strange screams of pain from the shrapnel that had buried itself deep in their flesh. The narrow country lane, a scene of sunny calm just a few seconds earlier, had been transformed into a picture of carnage.

It was 17 June 1944, and eleven eventful days had passed since
invasionstag
or D-Day, when the Allies had first landed in Normandy. Wolfram and his men had experienced a world of dangers as the American forces fought their way inland from their landing zone on Utah Beach. However, the German soldiers had not realised, until it was far too late, that they had pushed dangerously close to the American front line. Nor did they know that the little village of Le Vretot, their goal on that sunny afternoon, had already fallen into Allied hands. Wolfram, along with all the other men of the 77th Infantry Division, had inadvertently become trapped inside the American beachhead.

Now, they were sitting ducks.

There is a photograph of Wolfram AÃ¯chele from about 1934, shortly before his life was to be turned upside down by the megalomaniac ambitions of the FÃ¼hrer. With his freckles and toothy grin, he looks like a typical happy-go-lucky ten-year-old, yet his contemporaries remember the young Wolfram as something of an oddball, albeit an endearing one. He was a dreamer who was perpetually lost in his own imaginary world.

He still has his
zeitglÃ¶cklein
or âbirthday book' from this time: a daily calendar in which to note the birthdays of aunts, uncles, brothers and sisters. This particular book is filled instead with the birthdays of his childhood heroes â and they are not the ones you might expect from a young boy. No footballers, no heavyweight boxers. Instead, he lists, among others, Johannes Gutenberg, Albrecht DÃ¼rer and Tilman Riemenschnieder, master-craftsman of the late German gothic.

Wolfram was quite unlike other boys of his age. Each weekend, he would clamber on to his trusty boneshaker and set off into the rolling countryside, cycling enthusiastically from church to church in order to marvel at the glittering diptychs and triptychs of medieval Swabia. Overlooked by most adults â and certainly by children, these fantastical painted landscapes fired the imagination of young Wolfram. Their gilded twilights and luminous trees transported him into another world and he would dash home to make faithful copies of everything he had seen while out on his bicycle.

He had inherited his eccentricities from his parents, who encouraged him in his medieval fantasies. They also encouraged him always to think for himself â a pedagogy that would sit very uncomfortably with the Nazi ideology of the 1930s. His primary-school teacher, Frau Philip, was exasperated by his lack of interest in the team spirit, although others, close friends of the family, saw his precocious nonconformity as a cause for celebration.

âMy sons are interested only in following the crowd,' bemoaned the family's physician, Dr VÃ¶gtle, just a few months before the Nazis came to power. âI just wish they could be like Wolfram.'

Wolfram was born in 1924, an inauspicious time in which to arrive in the world. His most impressionable years would be spent in the shadow of the Third Reich, with its marching, drilling and obligatory attendance at gatherings of the Hitler Youth. He would turn eighteen, the age for compulsory drafting into the Reich Labour Service, in 1942. It was the year in which Hitler's invasion of Soviet Russia crumbled into disaster. There was never any doubt that Wolfram would be sent to the eastern front.

Nor was there to be any escape from serving in Normandy, where he would witness, from his German foxhole, the biggest amphibious assault in the history of warfare.

However, both war and defeat lay many years in the future for that young Swabish lad with his passion for bicycle rides and gothic altarpieces. In those childhood days before the Nazis came to power, life seemed filled with infinite possibility.

Witch Hunt, A Paranormal/Urban Fantasy (The Maurin Kincaide Series) by Rawlings, Rachel
The Poison Factory by Oisín McGann
Aimee (A Time for Love Book 3) by Phelps, Brandi
A Death in Wichita by Stephen Singular
Jaci Burton by Playing to Win
The Moretti Seduction by Katherine Garbera
Fyre by Angie Sage
Contested Will by James Shapiro
Moon Squadron by Tickell, Jerrard
Seeking Vengeance by McDonald, M.P.