The Break-Up Diet: A Memoir 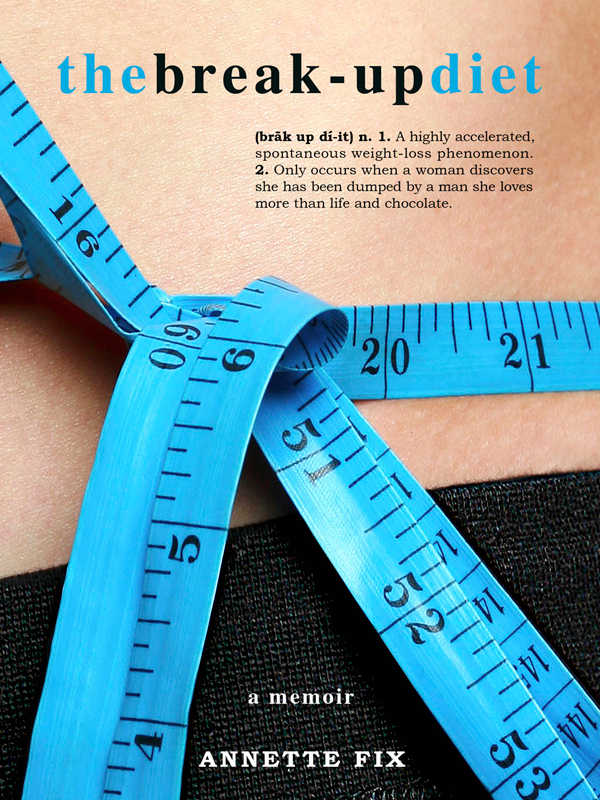 All rights reserved. No part of this book may be reproduced or transmitted in any form or by an means, electronic or mechanical, including photocopying, recording, or by any information storage and retrieval system, without written permission from the publisher, except for the inclusion of brief quotations in a review.

Product trademarks and brand names used in this book are for identification purposes only and belong to their respective trademark holders. Their inclusion is not intended to endorse or deprecate any particular brand.

This story is based on actual events. Some exact dates and names have been changed to protect privacy.

Womyn Books and colophon are trademarks of Orange Curtain Publishing

For my broken-hearted sisters,
hopeless romantics,
seekers of princes,
believers in happily-ever-after,
and queens of their own castle.

kevin and the
kübler-rossian process

I want to thank the people who affected my life enough to be immortalized in this book. If you recognize yourself in the stories, it is because of something you said or did, good or bad, which brought me to where I am this very moment. Without you, this book would not exist.

My greatest appreciation goes out to my family, friends, and fellow creative creatures who have fed my muse a steady diet of reality cookies. Donnamarie Vaughn—whose keen insight made me answer all the hard questions. John Kim—for the countless late night conversations about the wonders and frustrations of the process, those recipes are for you. Wendy Kamenoff—thank you for reading my stories and laughing and crying in all the right places, and especially for encouraging me to trust that the truth is enough. You've been a wonderful teacher and friend. Agent Wendy Sherman—for being the first industry professional to champion my work. Your affirmation kept me going. To the Wednesday Writers—Sandy Battista, Donna Todd, and Laurie Thomas for listening patiently while I pounded the clay, and for offering suggestions to smooth out the rough spots. Angela Mackintosh—you are such a prolific and creative genius, you inspire me. I look forward to continuing our friendship and working together on future projects. Michelle Montoya—for being my best friend and chief secret-keeper since seventh grade, and for never suggesting that I come up with a Plan B. Wonderboy—you are truly the best part of me. Thank you for always making me laugh and helping me keep things in perspective. Stefan—my dear, sweet prince, thank you for believing in me. You are loving proof that the universe expanded to meet my expectations. Without you in my life, I would be unfinished.

the sky is falling

The cordless phone rang. Once. Twice. With my eyes still glued shut, I fumbled through the layers of bedding to find it.

“Hullo?” The word came out in a mumble as I surfaced from the depths of a dream.

Slivers of sunlight peeked between the blinds and cast pinstripes of pale gold across the room. I blinked to life and stretched beneath the flannel sheets.

“Did I wake you?” Kevin's voice, flat and cool, cut through the background bustle of the golfers in the pro shop.

“Mmmm…good morning.” I cradled the phone against my ear and rolled onto his side of the bed.

I loved Kevin's daily wake-up call. Sometimes I kept my eyes closed and pretended he was still beside me, poking me in the back of the thigh with his early morning hard-on.

“Annette, we need to talk.”

His tone switched on stadium lights inside my head.

“I just can't do this anymore. I've felt this way for a while now…”

His voice sounded so far away, each word was shrinking and fragmented, nearly inaudible. Time stopped. My throat constricted and my morning brain struggled to make sense of the waking nightmare.

Kevin continued to explain why our relationship had to end, but the only thing I heard clearly was “I'm sorry.” He said it again and again until the sound rushed in my ear like wind through a tunnel. Until the word
sorry
had no meaning.

The ceiling swam above me. I blinked and my eyelids overflowed. Warm tears ran into the tiny hollows of my ears.

I cupped my hand over my mouth to hold back the choking sobs. I knew there was nothing I could say. He sounded so cold. I knew I'd already lost him.

The conversation ended as quickly as it began; I couldn't even say goodbye. Kevin hung up and the dial tone echoed in my head. My sobs, finally free from any witness, turned into wails bearing claw marks. Nooooo. Whyyyyyy? It became a rocking, incoherent mantra.

A soft rap on the bedroom door was almost lost in my sobs.

“Mom? Are you okay?” Josh peered into the room, his hand still gripping the doorknob.

I wiped the curtain of wetness from my cheeks and patted the space beside me. I tried to level my voice. “Good morning, Wonderboy. Are you ready for school?”

Josh sat on the edge of the bed and leaned to hug me. At twelve, he was small for his age, and reed thin, all elbows and knees. He pulled back and searched my face intently. “What's wrong?”

I couldn't tell him and then just send him off to school to deal with it. “I'm okay. Do you want me to help you with this?” I ruffed his soft, dark hair. “You're going to be late if you don't get moving.”

“I need more gel, I'm out. Can you be sure to buy the blue kind like we got last time?”

I nodded to assure him that I knew the proper color choice was imperative for his social acceptance. “Did you have breakfast and brush your teeth?”

“Yep.” Josh smiled with his lips pulled taunt like a manic clown.

“Good job.” I kissed the top of his usually spiky head and nudged him off the bed. “Have a good day. I love you.”

Josh's steps thundered down the stairs and I heard the front door slam.

Alone in the house, I felt abandoned in a cave of cold shadows; the silence pressed painfully against my chest. A fat, single tear rolled down each cheek. I couldn't believe Kevin left me.

I curled up like a wounded child and cried hard for hours. Weak and dizzy, the catching breaths pulled me into an exhausted sleep.

When I awoke, my head throbbed so much my eye sockets hurt. The sun had shifted, signaling the afternoon descent toward sunset. I rolled over and glanced at the clock. Josh would be home soon.

I stumbled weakly down the stairs to the kitchen and went through the mindless motions of boiling water for instant oatmeal. After forcing down two spoonfuls, I couldn't swallow. It caked like moist sand around the lump in my throat. I pushed the bowl away.

Why didn't I fight? I should've begged him to stay. I should've insisted he tell me what I did wrong. Maybe it was pride, maybe a little bit of defeat. It wasn't the first time I'd ever been dumped. But somehow, I thought my relationship with Kevin would make it all the way to happily-ever-after.

That's all I ever wanted.

Combine sorrow and disbelief. Add to scrambled heart and pour into scalding pan of emotional devastation.

Josh had already left for school. I noticed his breakfast dishes rinsed and stacked beside the sink. I'd have to buy an alarm clock to keep from oversleeping. There would no longer be any wake up calls.

I lifted the cordless phone from the charger and ran my finger over the number one—the speed dial button for Kevin. I couldn't imagine starting the day without hearing his voice. I wanted to call, but what would I say? What
could
I say, without sounding completely pathetic?

We would eventually have to talk. At some point, he would want all of his clothes and personal things. He'd need to rent a moving truck to take the furniture that was his and we'd have to figure out what to do about the lease—still eight months left and in both of our names. I didn't even want to think about what it would take to deconstruct our entire life together. A wave of dizziness forced me to lean against the edge of the counter. I hadn't eaten anything since those two spoonfuls of oatmeal.

I set the phone back into the base and scuffed across the kitchen like an un-showered asylum patient, wearing one of Kevin's old T-shirts and my Eeyore slippers. I opened the refrigerator. The chill pimpled my bare legs while I stared at the wall of food. Each jar and bottle meticulously aligned. Labels facing forward. Each cube of Tupperware stacked in neat pyramids.

How could Kevin leave me? Everything in our relationship was perfect.

A choking sob knotted my stomach and I knew I couldn't force down a single bite. I let the door swing closed and reached to straighten the towel hanging from the handle. Turning my back against the refrigerator, I slid to the floor and hugged my knees to my chest.

The top three lamest break-up lines are on the board…

Survey says: #3 I just want to be friends.

So, what did I win in this shitty game show medley? A free trip back into the dating pool. At thirty-four. What a prize.

I rubbed my forehead. Twenty-four hours of ceaseless crying had taken its toll. I rose from the floor and noticed my reflection in the microwave door. My hazel eyes peeked from between puffy lids. Kevin always said my eyes turned green when I cried, but I couldn't remember ever having cried so hard or so long.

I guess I should back up a little and mention how this particular relationship disaster started. I'm fighting the urge to use the phrase
Once Upon A Time,
but as a certified hopeless romantic, it did feel like a fairytale—at least in the beginning.

If there is such a thing as love at first sight, then that's what I felt when Kevin and I met. Everyone says you can't meet a decent guy in a bar, and certainly not in a strip club, but Kevin was different.

I saw him sitting at the tip rail with one of his buddies. I was working the lunch shift and they were still wearing their golf shoes. The blonde guy looked completely out of his element, but I recognized his dark-haired friend as a regular.

“So, how many holes did you guys make it into this morning?” I tossed out my first sexual innuendo de jour to both of them, but kept my eyes locked on the cute blonde.

The dark-haired guy flipped me a twenty. “Take this guy to the couch,” he said. “His name's Kevin. Don't hurt him.” The guy's laugh followed us as I led Kevin away by the hand.

Once we settled side-by-side on the red vinyl cushion, I was close enough to smell the sunshine on his skin, a warm, tangy scent. Kevin had wholesome, boy-next-door features and I was willing to bet he'd been crowned Prom King in high school.

I know, not exactly a typical stripper alias, but it was the only practical name I could come up with when I auditioned for the job. Somehow, I just couldn't see naming myself after a small defenseless animal, major U.S. city, or a semi-precious jewel.

“My friend says dancers don't tell guys their real names. Why did you tell me yours?”