M
ost of my childhood memories of my mom involve her sleeping. Either I’d stayed up late and managed to catch her coming home from work and climbing into bed, or I was sneaking into her bedroom in the morning before school and digging through her purse for lunch money, trying my best not to wake her because I knew she’d worked ridiculous hours the day before and would do it all over again this day. She wasn’t the kind of mother that I saw on TV or that my classmates had, but while our interactions were short and far in between, they were enough for me to understand I was loved and she was proud of me.

I was certainly proud of her (and will always be). My mom is a legend in my family. Hers is a classic American dream story. At the end of the Vietnam War, she and my four older siblings (ages three through seven), my grandma, and a handful of other relatives fled to the United States as war refugees. With no money, no connections, broken English, an eighth-grade education, and no help from the men in her life, she was able to work her way into owning not one, not two, not three, but
four
successful restaurants in Minnesota. She was and is my hero, my idol, and my role model. She made me believe I could do anything if I tried hard enough.

But as much as I admire and love her, I didn’t actually
know
her very well. Not as a person. I didn’t have a deep understanding of what drove her, what her fears and vulnerabilities were. Like most of the people in my life, she always tried to shield me from the bad, leaving me with bright eyes and little concept of how difficult it truly was to make her way in this country. That changed when I wrote this book.

I’m ashamed to say, however, that when I first set out to write
The Bride Test
, Esme— this character who shares so much in common with my mom— was not the heroine. She was the unwanted third leg of a love triangle, a woman from Vietnam whom Khai’s mom had arranged for him to marry even though his heart was elsewhere. I figured the story would be deliciously angsty and maybe a little amusing. Despite communication issues and a culture clash, Khai would feel obligated to help this woman, but in the end, he’d find a way to be with his true love, someone American-born.

A funny thing happened as I tried to write that story. Esme kept outshining the character who was meant to be Khai’s true love. Esme was brave, and she was fighting for a new life for herself and her loved ones in every way she could. She had reasons, she had depth, but she also had a striking vulnerability. All of her “drawbacks” were not due to her character. They were things beyond her control: her origin, her education level, her lack of wealth, the language she spoke— things that shouldn’t matter when determining the value of a person (if that can even be done). It was impossible not to love her. After the first chapter, I stopped writing.

I asked myself why I’d automatically decided my heroine had to be “Westernized.” Why couldn’t she have an accent, have less education, and be culturally awkward? The person I respect most in the entire world is just like that. After careful self-analysis, I realized I’d been subconsciously trying to make my work socially acceptable, which was completely
un
acceptable to me as the daughter of an immigrant. The book had to be reconceptualized. Not only did Esme deserve center stage, but I
needed
to tell her story. For me. And for my mom.

But when I restarted the drafting process with a fresh concept and new heroine, I ran into more roadblocks,
tougher
roadblocks. I’m not an immigrant. I have an Ivy League education. I’ve never experienced true poverty. What do I know about this kind of immigrant experience? I began to research in earnest, hoping I could find what I needed in books and video like I always had in the past.

For interested parties, here are some of the resources I read/watched for greater insights into the Vietnamese immigrant experience:

The Unwanted
by Kien Nguyen

Inside Out & Back Again
by Thanhha Lai

It’s a Living: Work and Life in Vietnam Today
edited by Gerard Sasges

These resources, while wonderful, were insufficient for my purposes. What I needed was a window into the heart of a magnificent Vietnamese woman, someone who had left everything behind, started over in a new world, and succeeded despite the challenges. It would also help if this woman knew what it was like to love an autistic man with issues of his own. Like my father. This was when the conversations started between my mom and me.

For the first time, she opened up and gave me both sides of her stories, not just the bright sides. For example, I’d always known she grew up poor, but she’d never gone into detail. Now she told me about the kind of poverty that still gives her goose bumps when she thinks back. I would share these stories, as I think they provide an amazing contrast to the present and illustrate just how far she’s come— they make me
prouder
of her— but to my mom, these stories are a source of terrible shame, even decades later as a successful businesswoman. She told me about the time an American officer offered to adopt her as a little girl and send her home to the States— surely that had to be better for her than being poor in Vietnam— but when her dad found out, he’d cried and cried. I’d heard the story about how my family members escaped to the United States and were taken in by a host family in Minnesota, but I never knew that their refugee plane originally landed in Camp Pendleton, California. No one ever told me that they had to leave for a refugee camp in Nebraska because a violent civilian crowd threw things at them and yelled for the “chinks” to “go home.” Through fresh tears, my mom told me about the blatant discrimination and sexism she faced in the workplace, about how she cried during her breaks but vowed to work even harder and prove herself. Because good work, she says, always speaks for itself. And so it did. And so it does.

Because of these conversations, I was able to give Esme a depth and soul that I wouldn’t have otherwise. I hope that comes out in the reading. Most important, the conversations gave me my mom, the fuller, more authentic version of her, and now I love her even more, respect her even more. I’m grateful for all those hours spent talking to her and so proud to share the essence of her with readers through Esme.

First of all, I need to thank
you
, dear reader. I’m honored that you’ve chosen to spend time with my words and hope that something here resonates with you, makes you think, or makes you feel.

This book was extremely difficult to write for a variety of reasons, and I’m so thankful for the people who supported me during the process. Suzanne Park, you are the most considerate, hardest working person I know. You inspire me. Gwynne Jackson, thank you for your kindness and patience and for always being genuine. It means more than I can say. A. R. Lucas, I’ll forever associate rainbows with you. Thank you for being there when things are rough. Roselle Lim, how is it that we only just met this year? It feels like we’ve been friends forever.

Thank you to the sensitivity readers who provided alternate perspectives on the diversity involved. I’m grateful for your valuable input.

Mom, thank you for leading by example and being you. I wouldn’t be where I am without you. Many thanks to the rest of my family for putting up with me as I wrote this book, especially when I was antisocial and wrote through all of our vacations. I love you all. Because I made the grievous mistake of not mentioning my nieces and nephew last time: Sylvers, you are super-super-duper awesome. And Ava, Elena, Anja, and Henry, too.

No acknowledgments would be complete without my amazing agent, Kim Lionetti. I couldn’t have asked for a better partner for this publishing journey we’re on. You make this even more special, and I can’t thank you enough.

Finally, thank you to the incredible publishing team at Berkley: Cindy Hwang, Kristine Swartz, Angela Kim, Megha Jain, Jessica Brock, Fareeda Bullert, Tawanna Sullivan, Colleen Reinhart, and others. This was an ambitious project for me, and you’ve all surprised me with how supportive you’ve been. I’m proud to work with you. 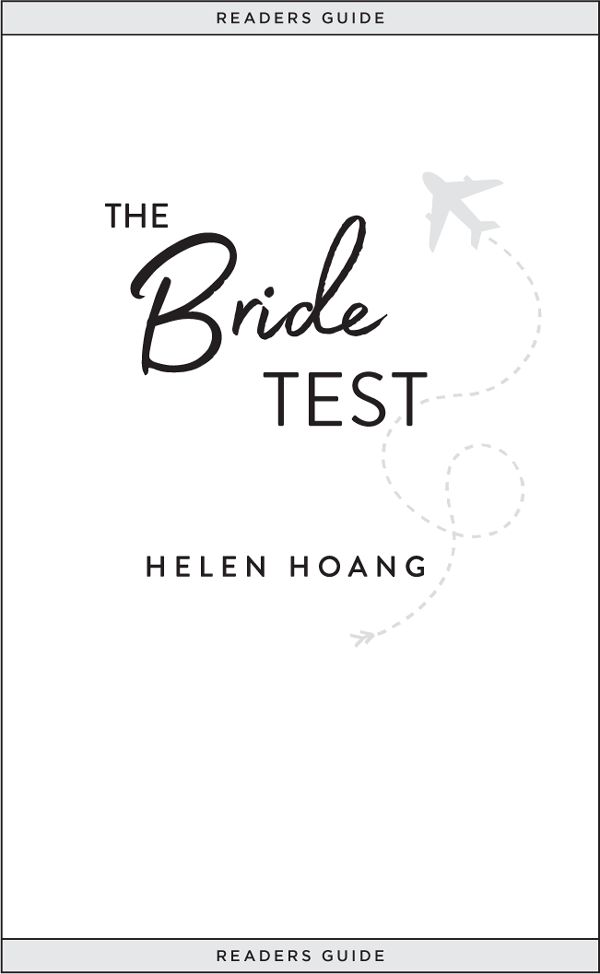 1.
Khải grew up in America, while Mỹ was born and raised in a small village in Vietnam. What cultural differences can you see and how do you think this affects who they are now?

2.
In the beginning of the book, Khải’s mother is in Vietnam to search for a wife for Khải. Do you think it’s wrong of his mother to meddle and interfere in his personal life, or is this justified as an act of love?

3.
Prior to reading this book, how would you have imagined an autistic man? How does Khải compare to this vision?

4.
Throughout the book, Khải is adamant about not having feelings, thus creating a chasm between him and everyone else. When do you see a breakthrough in this way of thinking? How does Mỹ help with this?

5.
Khải memorizes a set of rules that his sister made him that lists what he should do when he’s with a girl (
page 37
). Do you agree with this list?

6.
Though Mỹ originally goes to America with the purpose of seducing Khải, a lot of her time is spent going to night school and working at Cô Nga’s restaurant. This reflects the hard work that immigrants go through to build a life in the U.S. Can you or anyone you know relate to this?

7.
Mỹ lies to Khải about her occupation and tells him that she’s an accountant. She does this because she’s embarrassed by her station in life but also to feel some sort of connection to him. Should she have just told him the truth from the beginning or do you think her lie helps bring them together at least a little?

8.
As adamant as Khải is about not loving Mỹ, he does things for her that show how much he does care about her, such as carrying her and helping to find her father. What other ways does he show he loves her?

9.
At the end of the book, Khải tells Mỹ he loves her in Vietnamese. What is the significance of this? 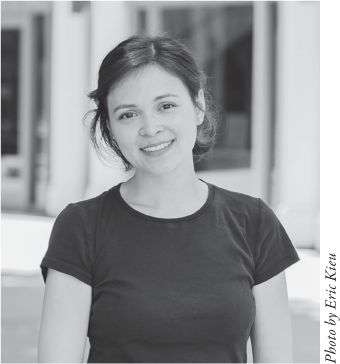 Helen Hoang
is that shy person who never talks. Until she does. And then the worst things fly out of her mouth. She read her first romance novel in eighth grade and has been addicted ever since. In 2016, she was diagnosed with autism spectrum disorder in line with what was previously known as Asperger’s syndrome. Her journey inspired
The Kiss Quotient
. She currently lives in San Diego, California, with her husband, two kids, and a pet fish.

Little Sam's Angel by Wills, Larion
The Baby by Lisa Drakeford
The Sorceress Screams by Anya Breton
The Price of Butcher's Meat by Reginald Hill
Fade by Kailin Gow
The Kidnapped Bride by Scott, Amanda
Midnight at the Masquerade by Brennan, M.M.
No Mercy by McCormick, Jenna
The Dogs of Babel by CAROLYN PARKHURST
Monroe, Marla - Belonging to Them [Men of the Border Lands 1] (Siren Publishing Ménage Everlasting) by Marla Monroe