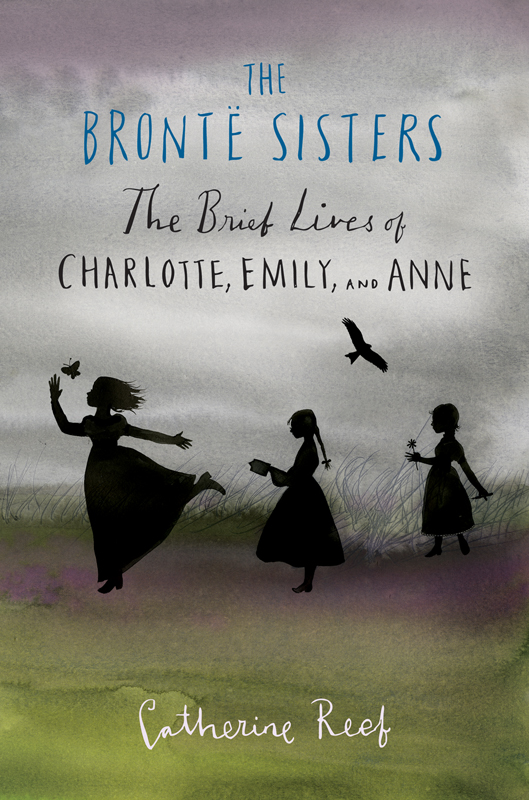 “What on Earth Is Half So Dear?”

“It Is Soul Speaking to Soul”

“Moorish, and Wild, and Knotty as a Root of Heath”

“A Dreadful Darkness Closes In”

“Out of Obscurity I Came”

“I Should Fancy I Heard the Steps of the Dead”

The Works of Charlotte, Emily, and Anne Brontë

For Karen Leggett, a friend to children’s literature

one
“Oh God, My Poor Children!”

T
HE
cobbled road clung to the steep hill as if holding on for dear life. Its paving stones had been set on end, forming a series of little ledges. The nervous horses felt for these rocky shelves to gain a footing; they feared slipping down as they hauled their heavy load.

It was April 1820, and a new clergyman was coming to Haworth. The Reverend Patrick Brontë surveyed the scene. He told his wife and children that they were all strangers in a strange land.

Life was easy for no one in Haworth—not for horses, and not for people. Haworth, in northern England, was a dirty village of weavers’ cottages, where death came early. The soured earth barely fed some stunted bushes that struggled to stay alive. Few trees grew in this bleak place, where a sad wind constantly blew.

Haworth Church overlooks the village from its hilltop. The tower still stands, but a later clergyman had the rest of the church torn down and rebuilt between 1879 and 1881.

Beyond Haworth stretched miles and miles of moorland, that bare, hilly country of rough grass, moss, and bracken. The Brontë children would learn to love this strange, wild land.

There were six children when the family moved into the parsonage at the top of the hill. Six-year-old Maria helped care for the younger ones, because their mother was ailing. Mrs. Brontë had yet to recover from the birth of baby Anne, four months earlier, on January 17. The second child, Elizabeth, was five, and Charlotte, born on April 21, 1816, was turning four. Patrick Branwell (called Branwell) was not yet three, and Emily Jane, born on July 30, 1818, would be two in summer.

The children played quietly in an upstairs room while their mother, Maria Branwell Brontë, wasted away. The nature of her ailment remains unclear. She might have had cancer, or she might have acquired a lingering infection after Anne’s birth. Antibiotics belonged to the future, so infections in the 1800s were often deadly. Her unmarried sister, Elizabeth Branwell, journeyed to Haworth from Cornwall, in the southwest, to nurse the sick woman.

The children turned to “Aunt” if they needed attention or care. They knew better than to bother their father in his study, where he wrote sermons and poems that taught moral lessons. In one poem, he revealed the dreary thoughts that ran through his head on a winter night.

And Virtue seeks her native skies;

And Honour’s but an empty name.

A gloomy host, comes pouring in.

This tall, redheaded clergyman was born Patrick Brunty in what is now Northern Ireland. His father was a farm laborer who could barely read, but Patrick wanted more from life. So he read books, taught school at sixteen, and caught the notice of an influential minister. This man saw that with an education, Patrick might become a fine clergyman, so he sent him to college in Cambridge, England. It was rare for an Irishman, especially one with such humble roots, to attend college in nineteenth-century Britain, but Patrick was uncommonly bright and ambitious. He distanced himself from his home and family even more when he changed his surname to Brontë, which sounded like the Greek word for thunder. He earned a degree in theology and was ordained a minister in 1806. He married Maria Branwell from Cornwall in 1812 and made England his home, returning to Ireland just once.

Open, rolling hills and blustery skies: this is the Yorkshire moorland.

On September 15, 1821, Maria Branwell Brontë uttered her dying words: “Oh God, my poor children!”
She became the first Brontë laid to rest under the stone slabs of Haworth’s church. “I was left quite alone,”
her grieving husband wrote, “unless you suppose my six little children and the nurse and servants to have been company.” His words implied that he did not. Hoping to marry again, he proposed to three women, one after another, but they all turned him down. None wanted a husband with a small income and a large family. Patrick Brontë remained single, and Elizabeth Branwell stayed on to oversee her late sister’s household.

Somber Aunt Branwell dressed in black. Like other country women, Aunt Branwell walked in pattens, or platforms of wood or metal strapped to her shoes. Most women wore their pattens outdoors, to raise their skirts above the mud and dirt, but Aunt wore hers in the house to keep her feet off the cold stone floors. There were few carpets in the parsonage, and no curtains hung on the windows, because the Reverend Brontë had a great fear of fire. He kept a pail of water on the staircase landing to be ready to douse a flame in a moment.

Aunt Branwell taught the girls to sew while the Reverend Brontë took charge of Branwell’s education. The clergyman had high hopes for his only son. He schooled Branwell in Latin and classical Greek, the subjects that formed the basis of a boy’s education. Branwell and his sisters read three daily newspapers and their father’s copies of
Blackwood’s Magazine. Blackwood’s
printed tales of country life, adventure, and ghosts. Charlotte was thrilled to read stories about Arthur Wellesley, the first Duke of Wellington. This great military leader had led the English forces in the 1815 Battle of Waterloo, in Belgium. England and its allies defeated Napoleon in this historic confrontation, ending decades of armed conflict between the English and French.

The Reverend William Carus Wilson founded the school at Cowan Bridge in January 1824, and Maria and Elizabeth Brontë came as pupils six months later. Carus Wilson meted out discipline that was strict to the point of cruelty.