Read The Brotherhood of the Screaming Abyss Online

The Brotherhood of the Screaming Abyss 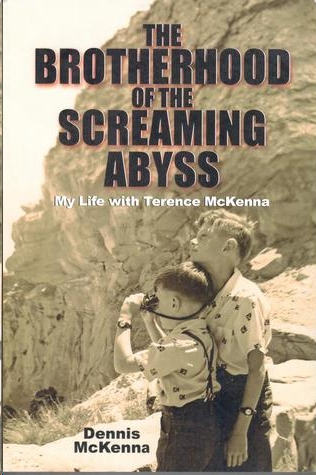 The Brotherhood of the Screaming Abyss

My Life with Terence McKenna

An imprint of North Star Press of St. Cloud, Inc.

All rights reserved. No part of this book may be used or reproduced in any manner whatsoever without written permission, except in the case of brief quotations embodied in articles and reviews. For information and permission, please contact the publisher.

The following works are used by permission:

printed by permission of the author.

Portions of Chapter 46 are adapted from an essay by the author that appeared in
Ayahuasca Reader: Encounters with the Amazon’s Sacred Vine,
edited by Luis Eduardo Luna and Steven F. White (2000).

An imprint of North Star Press of St. Cloud, Inc.

The Brotherhood of the screaming abyss: my life with Terence McKenna / by Dennis McKenna

To our Mother and Father, Hazelle and Joe McKenna, who loved us through it all.

Chapter 6 - The Nobody People

Chapter 9 - Goodbye to All That

Part Two - Into the Abyss

Chapter 30 - On the Edge of the Abyss

Chapter 31 - The Experiment at La Chorrera

Chapter 32 - Waiting for the Stone

Chapter 33 - The Bell Tower and a UFO

Chapter 39 - A Lab in Paradise

Chapter 40 - In the Trenches

Chapter 41 - An Encounter with Ayahuasca

Chapter 42 - The River of Poisons

Chapter 43 - Adulthood and its Victims

Chapter 48 - The Bard in Light and Shadow

The past is never dead. It’s not even past.

Reality is a hallucination concocted by our brains.

Memory is a fragmented tapestry patched with confabulation.

Within those constraints, I have portrayed the events and people in this book as accurately as possible.

A few names have been changed to protect the innocent, or in some cases, the guilty.

When Dennis asked me to write a foreword for this book, I was surprised and delighted. It had never occurred to me that such a book would require any foreword at all. Dennis is a well-respected researcher and thinker, and many of us have read his scientific papers or listened with pleasure to his interdisciplinary lectures, which combine ethnobotany, psychopharmacology, history, and philosophical reflections. But this is not an academic book. It is the long-awaited account of his lifelong relationship with his older brother Terence, the great raconteur of wide-reaching philosophical and eschatological ideas. In other words, what we have here is the privilege of going behind the curtains and peering into the private lives of these two extraordinary brothers, the poet and the scientist, the public figure and the more retiring originator of ideas, one who haunts us from the invisible yet pervasive World Wide Web (his words still fresh and even more relevant twelve years after his death), the other still with us, wise, and with an acute sense of humor. Like his brother, Dennis is a teacher from whom we still have much to learn.

I had the great good luck to meet Terence in my native Colombia at the end of 1971, when we were both still young. It was the beginning of a friendship that lasted until 2000, the year he died. I met Dennis in 1981, though in a sense I knew him well before then, because Terence spoke frequently of his brother, describing him as a genius and the source of some of the ideas that captivated him.

When Terence and I met, I was on vacation, visiting my family in Florencia, then a small frontier town located between the flanks of the Cordillera Oriental, the Eastern range of the Andes, and the Amazon rainforest. I recently had finished five years of studies at the Universidad Complutense in Madrid and planned to return to Europe two months later. Earlier the same year, Terence, Dennis, and some friends, while traveling in the Colombian Amazon area, had performed what they called the “experiment at La Chorrera,” later described by Terence in his book
True Hallucinations
. Terence was an enthusiastic and effervescent thinker, and I was an eager listener and interlocutor. Terence and his companion at the time, known in this book as “Ev,” moved with me to “Villa Gloria,” a pompous name for a simple wooden country house that belonged to my parents. Located a few kilometers outside Florencia, with one faucet and no electricity, the place had the advantage of seclusion for work and experimentation. Terence was starting to write what later became
The Invisible Landscape
with his brother Dennis as coauthor, while I was being introduced to the world of Carl Jung, Mircea Eliade, Alfred North Whitehead, James Joyce, and Carlos Castaneda. I had my first
yajé
experience in Villa Gloria, with a potion prepared by Don Apolinar Yacanamijoy, an Ingano shaman I had known since childhood, though at that time I was uninformed about the indigenous uses of that substance.

Two years later, in 1973, Terence and I were in Berkeley. This was a crucial summer for me in that, thanks in part to him, I discovered a wealth of ethnobotanical studies by the field’s great pioneers: Richard Evans Schultes, Gerardo Reichel-Dolmatoff, Gordon Wasson, Peter Furst, Johannes Wilbert, Michael Harner, and others whom I had the privilege of meeting at different points later in my life. In the evenings, when we weren’t watching the Watergate hearings on an old TV, Terence entertained his spellbound friends with his eloquence, his command of ideas in various disciplines, and his great gifts as a storyteller. His was not a modest enterprise: only “the big picture” would suffice. There was never a dull moment in his company, and I accepted, albeit naively and uncritically, virtually everything he said. I was even expecting the end of times on December 21, 1973, before his revision of the final ingression of novelty in his “Timewave Zero” model to December 21, 2012, a date that coincides with the end of the present era in keeping with the Mayan calendar. The months I spent with Terence in Villa Gloria and Berkeley were perhaps the most interesting of my life. Those extraordinary conversations catapulted me into years of passionate interdisciplinary research that tempered my enthusiasm and gave me a firmer ground from which to work, without ever weakening the admiration I had for him.

In 1980, Terence would once again play a decisive role in the path of my life. I went to visit him and his wife Kat Harrison at their home in Sebastopol, California. Terence had been told about Don Emilio Andrade Gómez, an
ayahuasquero
whom he had never met who lived close to Iquitos, Peru. Don Emilio soon became one of my dear friends and mentors. He was the person who introduced me to the concept of plants as teachers, calling ayahuasca one of the
doctores
from whom it is possible to learn. He also opened me to the world of ayahuasca
vegetalista
traditions as practiced by the mestizo population of the Peruvian Amazon.

Since we met, my working relationship with Dennis has been even closer than my friendship with his brother, since I only saw Terence sporadically during the years when his fame peaked. Dennis and I did fieldwork, traveled, and published together. We’ve stayed in luxurious hotels at conferences in various countries as well as in humble posadas in the Amazon. I have visited him in every city where he and his wife Sheila have lived. And, above all, Dennis and I have experienced great adventures of the mind together due to our common interest in psychoactive plants and modified states of consciousness.

In 1985, I invited him to participate in what was the first international and interdisciplinary symposium on ayahuasca, which I organized in Bogotá as part of the forty-fifth International Congress of the Americanists, an academic conference that takes place every two years, alternating between Europe and the Americas. After the event, I flew to Pucallpa, Peru, where Dennis introduced me to the artist Pablo Amaringo, with whom I collaborated for several years. Our book,
Ayahuasca Visions: The Religious Iconography of a Peruvian Shaman
, first published in 1991, explores the complexity and sophistication of the Peruvian mestizo ayahuasca tradition. In 1988, Pablo and I created the Usko-Ayar Amazonian School of Painting, which was destined to have a lasting influence on the art scene of the Peruvian Amazon. By the time I resigned in 1995, the school had grown to some 300 students, all of whom got their tuition and art materials free of charge. During the last ten years, Dennis has been one of the main lecturers at Wasiwaska, Research Center for the Study of Psychointegrator Plants, Visionary Art and Consciousness, a small educational institution that my wife Adriana Rosa and I created in southern Brazil. Dennis always arrives with new ideas and an intellectual curiosity that has grown with time. His presence has become ever more significant in the current transcultural and interdisciplinary global community concerned with the large questions of temporality, reality, and consciousness.

Chasing the Wild Sparks by Alexander, Ren
Goodnight Nobody by Jennifer Weiner
Dog Day Afternoon by Patrick Mann
Shrike (Book 2): Rampant by Mears, Emmie
To Sell Is Human: The Surprising Truth About Moving Others by Daniel H. Pink
A Strange Stirring: The Feminine Mystique and American Women at the Dawn of the 1960s by Stephanie Coontz
Death of a Garage Sale Newbie by Sharon Dunn
Krapp's Last Tape and Other Dramatic Pieces by Samuel Beckett
Observe a su gato by Desmond Morris
Sinners On Tour 01 Backstage Pass by Olivia Cunning