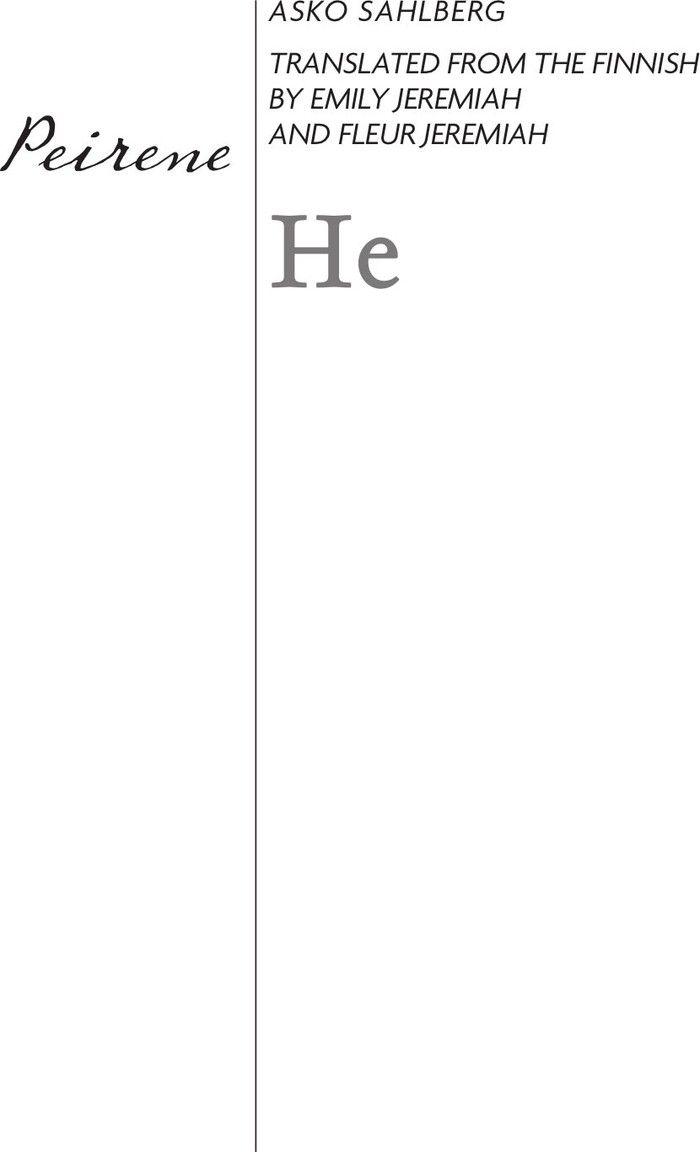 This is a historical novel in miniature form. It deals in dark passions and delivers as many twists as a 500-page epic. And as if that were not enough, each character speaks in a distinct voice. I’m thrilled to publish a book that is as Finnish as a forest in winter but that resembles a work from the American South: William Faulkner’s
As I Lay Dying
. 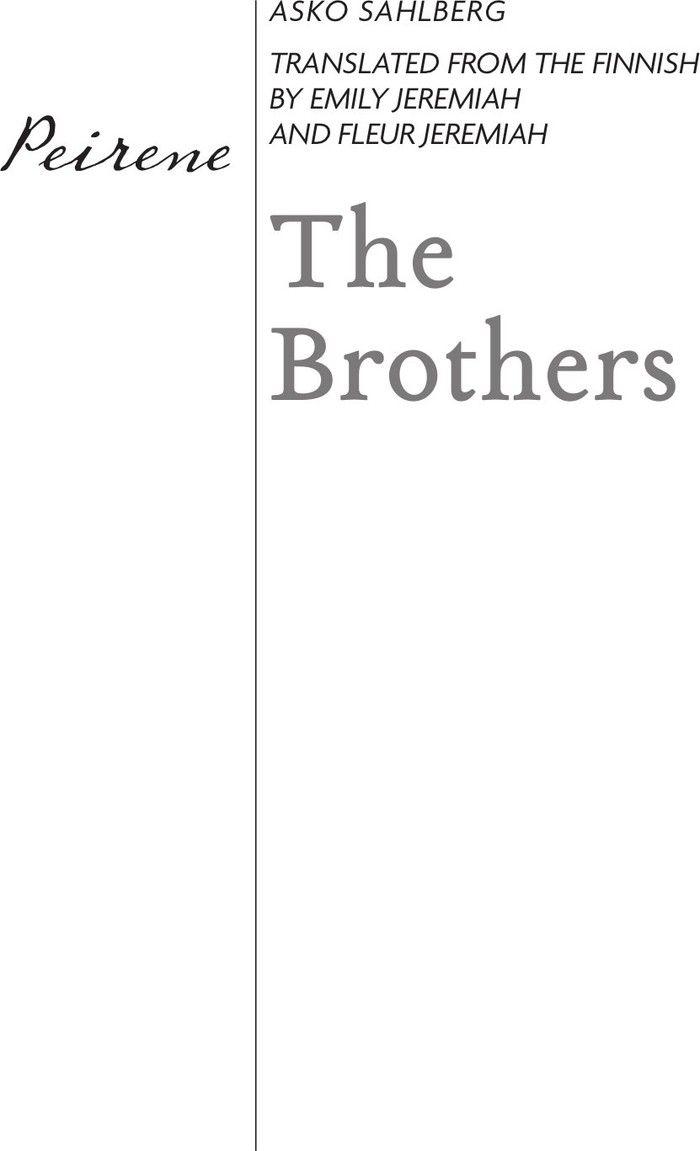 Other titles from Peirene Press

About the Author and Translator

The Brothers
THE FARMHAND

I have barely caught the crunch of snow and I know who is coming. Henrik treads heavily and unhurriedly, as is his wont, grinding his feet into the earth. The brothers are so different. Erik walks fast, with light steps; he is always in a hurry, here then gone.

The steps pass my cabin and cease. I stand up, go to the door, push it cautiously open. Henrik stands treelike in the middle of the yard. He takes his time, stares at the house. The windows glimmer with light, muffled by the thick curtains. The house looks bigger than it really is, silhouetted against the forest, magnified by the dark. He knows its precise size, of course, and how much grief and disappointment it holds.

If I were in Henrik’s shoes, I would not wish to go in, either; I would not dare. Mind you, hasn’t he been given more courage than is good for a man? He has never been able to control himself, not since he was a child. He is like a crazy horse that needs reining in. But even the most reckless of men will not do some things unless forced, not if the time is not right. Or only if they are cursed with extreme stupidity. But Henrik is no fool. On the move again, he heads for the stable.

I sit here, breathing fast. The wind pokes the cabin walls. My nose tells me the fire is dying. My eyes see nothing, for they have spied another kind of dark.

The war has been waged, but here we may yet have corpses.

Yesterday I saw the footprints of a wolf at the edge of the snowy field. That was how I guessed. That was why I went outside, into the pale dawn. I went silently, as if non-existent. I smelt the night and the cold tree trunks. I saw my breath steaming in the frosty air. I did not need to find the boot-prints in the yard but I still looked for them. I avoided staring at them so that I would not run off. I did not look in the direction of the stable, though my back strained to twist free from its base.

I would have returned inside had I not spotted the Farmhand. He was standing in front of his cabin, immobile and eternal, grown from the soil. He is a mystery. He is always there, and yet he is not. You see in him many generations of men with gnarled fists and bony knees. Such men are generally either coming from the forest or going to the forest. Or else they are harrowing a field or sitting on some steps, smoking a pipe without moving their lips. There is no point wondering what the Old Mistress sees in the Farmhand. We all pretend we do not hear the hem of her faded muslin skirt brushing the path across the yard at night.

And then an owl always cries.

The Farmhand was watching me. I could tell because he had turned his head. The hollowed-out footprints from the road to the yard led back to him. In these parts, all prints lead to him. Everything originates from him, more or less, although he does not know it. He is the only one of us who is free from the sin of lying and thus he is innocent.

I finally reached the steps and re-entered the house. And then I just existed. The day had arrived in full, and now I listen to the Old Mistress moving about upstairs, stiff-hipped. I know that the maid has been to her room, that the heavy curtains have been opened and the bed has been made. The room smells of powder, bad temper and the scent Erik says costs too much. On the wall hangs the only painting in the house. It shows a man with bushy eyebrows. He stares at you from underneath his stiff-brimmed hat, which does not fit him at all and appears to have grown directly from his skull, extending out from his forehead and above his ears like two horns fused together. Maybe the Old Mistress pauses to stare back at those eyes, painted near-black. For a moment, she sits down in her chair, upholstered in worn brocade, but soon restlessness forces her back on her feet. Her unease disappears later in the afternoon and mellows into empty-faced lassitude in the course of the evening.

From outside, I can hear the sound of sharp blows. The Farmhand is chopping wood. His axe strikes rhythmically; he has an internal clock, its tempo beats in his arms.

I have an internal clock, too. It has stopped at the early hours of the morning.

A shadow flits across the window. I go to see: Henrik is moving slowly towards the woodshed. He is as
broad-shouldered
as ever, but is he still the same? Immediately, my back tenses like a spring. I am all fluttery as I hurry into the hall and push my feet into shoes. I slip out on to the steps. I am so light that the snow, trampled hard, does not betray my movements. I turn off the pathway and reach a place behind the cowshed where I can listen. I hold my breath, to hear without being heard.

‘At least the place hasn’t been left to rot,’ says Henrik. ‘I could see that when I arrived last night. The moon’s as bright as the sun sometimes.’

It takes a while for the Farmhand to answer. ‘Bright enough to do battle by?’

‘We didn’t do much battle at night. Only a couple of times. We were near here one night, over by the village.’

The Farmhand’s axe is still. ‘I heard. You burnt down the houses.’

‘What does it matter who did the burning? I saw to it this house wasn’t burnt. Though the enemy had a friend here, so they said.’

The Farmhand spits. He barely makes a noise. ‘Depends how you see it. Some had a different enemy – that goes for many men we know.’

‘Well, now we have an emperor. New regime. It’s time to put away the weapons and start thinking about the future.’ I can picture Henrik’s face, set, like a pale piece of wood resting between his shoulders. ‘Things will get better, believe me.’

‘It’s not about believing. Nothing’ll change if you swap one master for another.’

‘I wouldn’t put it quite like that. But there’ll be time to talk about it. I should go and greet Mother and whoever else is in there now.’

‘Erik went to town yesterday, with Mauri. And the Old Mistress hasn’t been too well lately.’

Henrik does not sound surprised, or even anxious. He asks in an expressionless voice, ‘What’s wrong with Mother, then?’

‘Of course you should. Out with it.’

I can tell the Farmhand isn’t looking at Henrik. ‘Maybe it pains a mother to see her sons fight each other.’

‘My fight was with the King. There’s a big difference.’

A crow caws in the pine trees. Wind blows over the cowshed roof. Henrik says, ‘At least the place looks in good condition.’

I sense he is about to leave even before he turns on his heel.

The Farmhand grunts and carries on chopping firewood as if he had never lost his earlier rhythm – rather like sounds deep inside a forest are briefly drowned out by a gust of wind, before returning. He groans, but not because of the physical exertion.

I wait with my back pressed against the wall until the sound of Henrik’s steps has died away. I creep to the corner of the cowshed just in time to see the wiry figure disappear through the door. I stand still, with a throbbing in my throat that is rooted in my heart.

The hens are laying well. I was wise enough to pay for a good breed. I should teach the new girl to bake.

She has definitely not changed for the better. I said it upon leaving and I will say it again: a cow that no longer yields milk should be taken to the knacker’s yard. Never mind honouring your mother, I might as well pay my respects to the whore of Babylon.

She stands with her back to me, merely to make a point. She fiddles with her hair, which already shows some grey. But I can see her neck trembling. The grandfather clock strikes in the corner and the new housemaid clatters about in the kitchen. The girl still has a lot to learn. Or is it too much to ask that servants do their job without creating a din worthy of the Old Testament? That is what is wrong with these people. They are useless and lazy. They are bringing this country to ruin. I had to travel hundreds of versts to get here, only to hate my homeland all over again. In St Petersburg, I thought I could strip off this nation like a torn shirt, but it was not that easy. I bear the mark of Cain. It is not enough of a destiny for a man to be born at the wrong time, he also has to be born in the wrong place. And what’s more, he has no stake in that place whatsoever.

Mother turns suddenly, as if spun round by a gust of wind. Her face looks pale in the slanting light. The wrinkles that begin at the corners of her eyes and the sides of her nose have deepened, and the skin under her chin has loosened. ‘What sort of a place is it, then?’ she asks.

‘There’s no other city like it,’ I reply. ‘There are more fountains there than there are houses in Turku, and Nevsky Prospect is so packed with carriages you can scarcely squeeze between them. There’s progress, well-being, plenty of rich folk. Not even Stockholm can compete.’

Her eyelids don’t flicker. ‘If it’s so grand there, wouldn’t you have been better off staying?’

I will not lose my temper; I will not give her the satisfaction. I answer, ‘Yes, of course, but history’s being made. Good men are needed here, now that we’re lucky enough to be part of the Empire.’

‘Call it luck, or else the Emperor doing us a favour out of the goodness of his heart. Of course, many of the local peasants haven’t yet grasped this.’

‘But you were right to return to the peasants?’

‘I hear Erik is in Vaasa with Mauri,’ I say. ‘The Farmhand told me.’