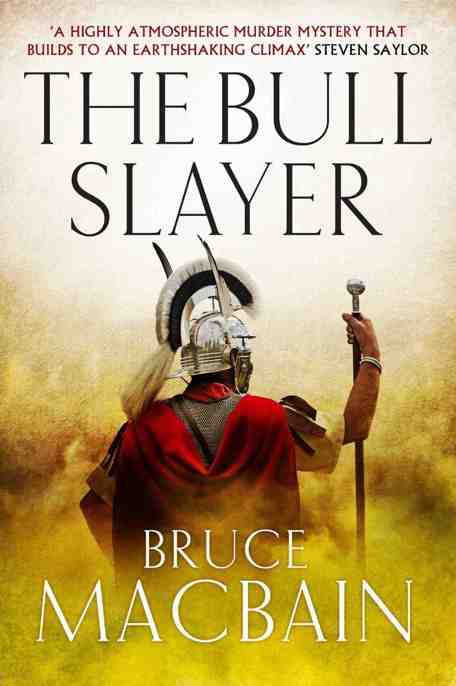 For Carol, Andrew, and Anthony

She even puts my verses to music and sings them, accompanying herself on the lyre, with no instruction from a music teacher but only love, which is the best teacher of all. 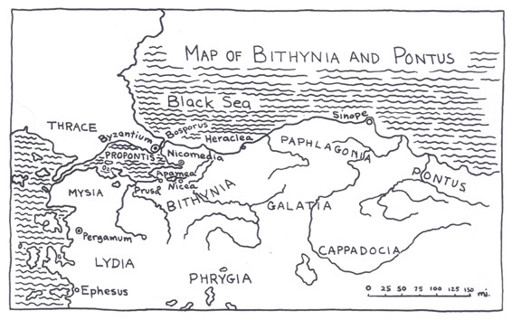 (in order of appearance)

Gaius Plinius Secundus (Pliny), Governor of the province of Bithynia-Pontus

Atilia, the wife of a Roman businessman

Marcus Vibius Balbus, the Fiscal Procurator of the province

Diocles the Golden Mouth, a wealthy provincial, famous as an orator

Rufus, the young son of Zosimus and Ione

Nymphidius, a member of Pliny’s staff

Sophronia, owner of a brothel

THE TENTH REGNAL YEAR OF THE EMPEROR TRAJANUS AUGUSTUS, CONQUEROR OF GERMANY, CONQUEROR OF DACIA, PONTIFEX MAXIMUS, HOLDING THE TRIBUNICIAN POWER,
CONSUL FOR THE FIFTH TIME, FATHER OF HIS COUNTRY, BEST OF EMPERORS

The province of Bithynia-Pontus

Through long weeks of instruction, the Father had taught him the rituals, the star-lore, and the incantations that he must pronounce when the moment came. All that study had made his head hurt; but he had a purpose that drove him. For the past week he had abstained from sex, meat, and bathing. And now at last he was drawing near to the cosmic cave, to a confrontation with the beautiful young god in his fiery splendor. He would see the mystery of the bull’s death, he would be baptized with water from a living spring, his soul would soar up through the seven planetary spheres to the starry firmament where one day it would dwell forever. He would share bread and wine—the flesh and life-giving blood of the bull—with his brethren and be born again for eternity.

They emerged finally from the dark woods at the foot of a craggy upthrust of bare rock and, just as they did so, the sun broke over its top and bathed them in its rays. The Unconquered Sun. All-powerful Mithras. Lord and Savior.

No casual traveler could have stumbled upon the entrance to the cave; it was low and only some six paces wide and well concealed by brush. While the
mystae
busied themselves clearing this away, the Father, a frail old man with infinitely wrinkled skin, turned to him, grasped his hand in fellowship, and smiled at him. “Are you ready, my son?”

Following the Father, he ducked under the rocky overhang and descended the seven stone steps, worn smooth by the feet of the blessed, down into the earth’s dark womb. The damp subterranean chill made him shiver. The stale air smelled of dripping stone and burnt pine. Now the
mystae
moved here and there in the cave, igniting incense and lighting the pine torches that stood in niches along the walls. He gazed around him in the guttering light. The cave was no ordinary one; it had been reshaped by men’s hands. It wasn’t large—forty paces long, fifteen across. Twenty men filled it full. A narrow nave ran the length of it with stone benches along each side where they would recline for their meal. The low ceiling was arched, painted midnight blue, and sprinkled with golden stars; the signs of the zodiac ran around the walls. The nave ended in an apse where curtains hung before the altar. The crash of a bronze thunder sheet shattered the silence and unseen hands drew the curtains back. Then he gazed for the first time upon the mystery of his new faith. Suddenly he thought his heart would burst—the intensity of his feeling took him by surprise. Sculpted in high relief from the living rock, the figure of Mithras, a serene and handsome youth dressed in a billowing blue cloak and red Phrygian cap, straddled a kneeling bull, holding it down with his knee, pulling its head backward with one hand, and plunging his dagger into its throat. A dog and a serpent licked the bloody wound, a scorpion attacked the bull’s testicles, and from the bull’s tail sprouted ears of wheat.

Bells chimed and the hollow eyes of the god blazed with sudden fire. The
mystae
began to chant the
Nama Mithras
. They raised their hands, each one holding the emblems of his rank—cup, spear, sickle, whip, thunderbolt. The torchlight threw their shadows huge against the wall.

Now hands removed his clothes, blindfolded him, and guided him down the nave toward the altar. Hands on his shoulders forced him down, pressing his forehead painfully against the cold stone. Other hands pulled his arms behind him and bound them with the hot guts of a chicken. The sharp point of an arrow pricked his neck.

“Take three deep breaths,” spoke the Father close to his face. “You will rise into the air, you will look upon the face of our god, you will taste immortality.”

And so he did, or thought he did at any rate, for a brief moment. And then it was over. His new brothers raised him up, removed his blindfold, clothed him. They pressed around him, shaking his hand. The Father beamed. The Sun-Runner, second in rank to the Father, hailed him in his rich baritone.

“You’re a Raven now, my good friend, and soon to rise still higher in our ranks. You honor us with your patronage, a man of your rank and power. And now let us eat and drink to your good fortune. I should say to
our
good fortune.”

The new-made Raven looked from face to face and was answered with smiles all around. Indeed,
fortune
was the word.

Nicomedia, capital of Bithynia-Pontus. Two years later.
The 13th day before the Kalends of October

Clerks bustled back and forth in the great hall, carrying armloads of scrolls, making a great to-do of hunting for the missing documents, accomplishing very little. Gaius Plinius watched them with growing exasperation. The chaos of the archives, the slovenly habits of the staff he had inherited from his predecessor, the ruinous state of the old royal palace in which they were housed. Day three in his new post. He had expected bad: this was worse.

“Patrone.” His freedman Zosimus touched his shoulder. “It’s past midday. You’ll want to eat something and then rest for a bit. Doctor’s orders.”

“What? It can’t be so late already. No, just have a tray brought in.” Zosimus frowned. “It’s all right, my boy. I’ll rest later, I promise.”

White Witch by Trish Milburn
Rogue by Julia Sykes
Beauty and Pain by Harlem Dae
Capturing Angels by V. C. Andrews
Magdalen Rising by Elizabeth Cunningham
Death of a Stranger by Anne Perry
Stand-In Wife by Karina Bliss
Silver Kiss by Naomi Clark
This Is What I Want to Tell You by Heather Duffy Stone
The Mystery of Adventure Island by Paul Moxham