Read The Buried Symbol (The Ruins of Issalia Book 1) Online

The Buried Symbol (The Ruins of Issalia Book 1) 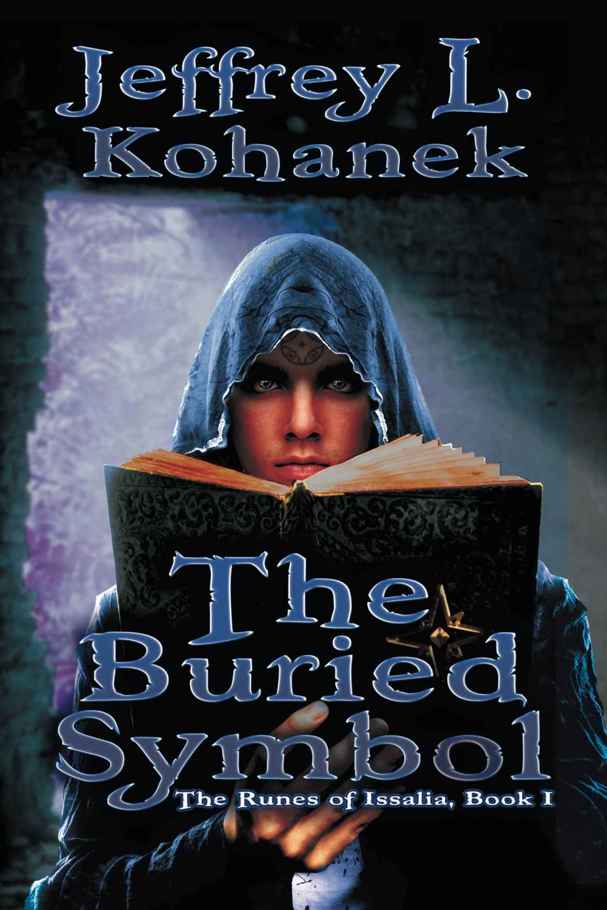 The Buried Symbol: The Runes of Issalia, Book I

All rights reserved. No part of this book may be reproduced, stored in a retrieval system or transmitted in any form or by any means without the prior written permission of the publishers, except by a reviewer who may quote brief passages in a review to be printed in a newspaper, magazine or journal.

The final approval for this literary material is granted by the author.

Print edition produced in the United States of America

This tale is dedicated to my family for their inspiration and support.

Moisture from the mist left Brock
’
s hair damp and the roof tiles slippery. He leaned against the brick chimney, ensuring his footing as he watched the shop across the street.

Now nearly midnight, the only light was the pale blue aura emitted from the glowlamps at nearby intersections. The shop was midway between the lamps, their light barely reaching it through the gloom. The effect of the blue light upon the milky air gave an otherworldly feel.

The door of the inn beneath him burst open and two men stumbled out. The ruckus they created disturbed the tranquility of the setting. One man helped the other to his feet, and they set-off down the street. Weaving as they walked, they bellowed a common tavern song, not caring that they were quite out-of-tune. The two drunken men turned the corner, disappearing as their sorry song faded into the night.

When the street quieted, Brock heard another door open. Through the fog, he could just make out the shop owner pulling the door shut. The man locked the deadbolt and hurried down the street, heading the opposite direction of the two drunks. He passed the glowlamp and faded into the foggy night. It was time to move.

Brock shimmied over the edge of the eave, dropping to the balcony below. Stepping over the railing, he lowered himself until he was hanging with arms fully extended. He let go, landing lightly on the wet cobblestones.

He crossed the street and tested the door, confirming that it was locked. Reaching into a coat pocket, he withdrew a sheath containing a knife and bent needles. A moment later, the deadbolt clicked open and he slid inside.

Gently closing the door, he paused in the darkness to listen for movement. Deciding he was alone, he replaced the knife and needles in exchange for a glass tube from another pocket. After giving the tube a couple good shakes, it began to glow.

The light revealed that he was standing in the front section of the store, divided from the rest of the building by a long service desk. He circled the desk, observing shelves lined with jars and canisters filled with liquids and powders. It appeared to be a typical apothecary shop, but after a week of spying, Brock knew that this was no ordinary shop.

Creeping past the shelves, he focused on the dark doorway at the back of the room. The soft light from the glowstick ate away at the darkness, giving shape to the room beyond.

He stopped before the doorway, scanning the interior without crossing the threshold. If there were traps set against thieves, they would be within that back room, beyond the area of normal business.

He knelt to examine the floor beyond the doorway. From the low angle, he noticed one floorboard sticking above those around it. Perhaps the wood was just swollen from moisture. Perhaps it was something else.

Reaching into another pocket, he removed a pouch filled with coins. He tossed the pouch toward the floorboard and quickly spun from the doorway.

Brock heard the
thump
of the pouch landing, followed by a
twang
as two crossbow bolts flew past to impale the wooden shelf across from him. The
thud
from the impact of the bolts left his heart pounding and his stomach twisting in anxiety. Staring at the shafts vibrating, he thanked Issal that they were embedded in the shelf and not in his chest.

He took a breath, calming himself. He hated this, but had no choice. Closing his eyes, he found his resolve and reopened them.

Sliding through the doorway, he scooped up his coin purse and stood to examine his surroundings.

An empty dual crossbow mounted on a stand pointed toward the door. Below the crossbow was one of three workbenches aligned along the wall. Bowls, vials, jars, papers, and hand tools rested upon the benches. A wooden stool sat before each bench and a large fireplace waited at the far end of the room.

Brock approached the nearest workbench and began searching for a hidden compartment. Finding nothing of note, he turned to move along and the fireplace caught his attention. It seemed an ideal location to hide items of value. At least, that is where he would hide them.

He started toward the fireplace, stopping when something made him hesitate. Feeling a slight pressure against one shin, he leapt backward. He heard a
swoosh
and felt a sharp pain just above his eye. His hand went to his brow as he looked up to see what had cut him.