The Business Affair: Forever Mine 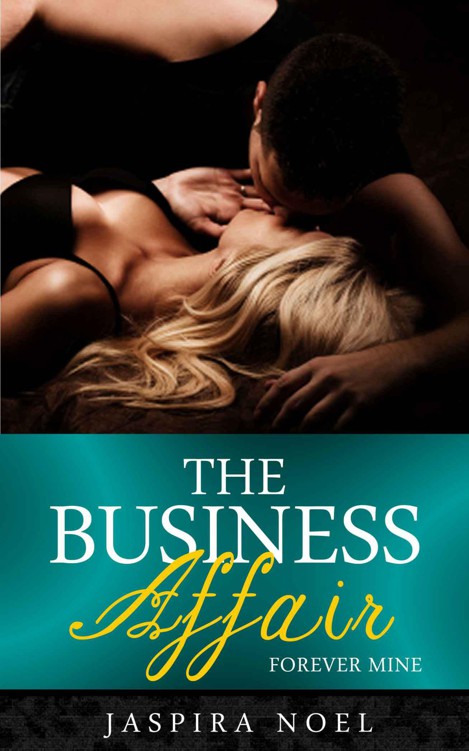 The Business Affair: Forever Mine

Other Books by Jaspira Noel

All rights reserved.  This book or any portion thereof may not be reproduced or
used in any manner whatsoever without the express written permission of the
publisher, except for the use of brief quotations in a book review.

To my husband – the best thing in my life, continue
to rock my world.

Other Books by Jaspira Noel

If you have enjoyed reading this book, a helpful
review would be appreciated.

Latest in the series:

The Business Affair – Shades of Romance

“Welcome to Roman Neilson Associates of New York,
Mr. Boyd,” said Paula Anderson, Mr. Neilson will be with you, please have a
seat.

She quickly walked down the hall and entered
Roman’s office. As usual he was not there, and apparently intended to be late
for the meeting. She had no intentions of letting that happen.  In the seven years that she had been employed
with the company she had become Roman’s right hand, both legs, and feet. She
knew exactly where to find him, in the research department trying to figure out
his next big bank merger. She walked behind his desk and hurriedly dialed the
department.

“Connie, tell Roman to get down here. His latest
acquisition is here.” She said hanging up the phone.

Connie rang Roman’s office phone a few seconds
later. “He wants you to handle it.”

“He says he wants you to handle it.”

Paula slammed the phone down and made her way up
to the 8
th
floor to Research and Development. She briskly walked
through the area finding Roman seated at a desk pouring over financials. Before
she could say anything he stood to his feet, raised his hand. He was a
strikingly handsome man. Paula found herself arrested by his looks as much as
the hand raising up. His dark hazel eyes sent a message of warning. His face
was as perfect as a newscaster on a morning show. He had curly black hair, was
tall and perfectly tanned.

“I am not asking you to do it. I am telling you
to do it. You should have everything wrapped up in three hours.”

“Roman, you can’t be serious. You know what
today is. You know how hard I worked to get this vacation. I have been
preparing you, for today, for weeks. You also know that doctor told me the burn
on my hand would never finish healing properly if I stayed under stress. I’ve
got to get out of here.”

“I made you Vice President of the company within
7 years because you are excellent in what you do. Changes are part of the
territory. I don’t have time for his questions today. Wilson National is
failing and we intend to be the company that bails them out. So I have got to
get on this now. Just answer his questions and get that paper transferring all
their assets signed today. Your hand is going to have 3 beautiful weeks of
healing. You tell your doctor if it does not I will hire the best plastic
surgeon in the country. Nobody sticks their hand in an oven without a mitt.”

“The mitt was wet and I did not want to get
burned by the steam. I thought the knife would clear the oven rack to test the
casserole.”

Roman walked over to her firmly grabbing her
hand, “Let me see it. Looks much better than it did a few weeks ago. You will
be fine.”

“I am going to miss my damn plane.”

“Then I will charter you one.”

“Your kidding right, you think I am going to let
you know where I am going on vacation? There is no way I would even consider
you doing that. I will just have to take a later flight.”

“This is not funny Roman. One of these days…”
Paula said storming out of the room.

“I want to see you before you leave today.” His
voice trailed.

Paula was angry and exhausted when she got home
from the office. The meeting did not take three hours. It took six. Not only
had she missed the flight. She had missed all flights for the day. All of the
well-planned arrangements for laying her tall, beautiful 130-pound shapely body
upon the sandy shores of a private beach in Mexico had been scrapped for the
day.  Today was the day she was
supposed to be wearing that new neon pink bikini. She had mentally scripted
every part of stepping onto the shore. She saw her long blond hair blowing in
the tropical breeze, the Ray Ban sunglasses covering her steel grey eyes, the
highly glossed lips and the feel of the sun on her bronzed skin. This would not
be the first time Roman had gotten between her and bliss.

The airline had to re-arrange her flight for the
next morning. She flung herself on her bed, wondering why she was still at
Neilson Associates. To tired to undress she kicked off her shoes and lay there.

Many times the pressure of being VP and Roman’s
incessant demands made her want to look elsewhere for employment. Yet, at the
same time she knew she was a valuable asset to the company and Roman paid her
very well. Weighing out that she had become second in command in such a short
amount of time also was a huge deterrent to leaving, but the temptation was
surely there.

She dozed off. Shortly after, her cell phone
rang she saw it was Roman.

“Not answering that.” She said, pulling a pillow
over herself to mute the phone.  By
the third time he called she angrily answered the phone, breathing yet not
saying a word.

“If you had stopped by to let me know how the
meeting worked out I would not be calling. I asked you to stop by before you
left for the day. Anyway I need the files for the Madison account.”

“You know Baxter is taking over while I am on
vacation for the next three weeks. Did you ask him?”

“He is already gone for the day.”

“I know. Everyone in the office should be gone
for the day. Get the files from Baxter in the morning.”

She abruptly clicked off the line. He rang
again. She did not answer. After several other attempts she finally picked up.

“You still did not tell me how the meeting
turned out with Mr. Boyd.”

“Are you sitting at your desk?”

“Then right in front of you should be one of the
biggest files I have placed on your desk this week with Mr. Boyd’s name on it.”

“Ok, I will admit it. I am very nervous about
you being gone for three weeks. I have no idea where you are going. You are
such a big part of this company and I don’t know if Baxter can handle things as
well as you do.”

“He will be fine. I have been training him for
months. Don’t call back. I am officially on vacation.”

Again she abruptly clicked off the line. This
time she muted the cell phone and finally got some much needed sleep.

Paula arrived in Mexico at noon. A limousine was
waiting for her at the airport. “Greetings Miss Anderson.” Called the
driver.  The sound of a heavy
Latino accent was like music to her ears.
It was her first reminder that she was far, far away from home - even
better, far away from Roman. “Will you be staying at Casa Del Leon as before?”
“Yes.”

As he opened the door to the limo, she welcomed
the site of the wet bar with her favorite Strawberry Margarita already
prepared, and one dozen red roses. There was no finer limousine service than
Pablo and Sons.  They had been a
part of Mexican life for decades.

“Do you mind if we drive with the windows down?
I am dying to view something different, and smell the sea salt breeze as we
drive up to the resort.”

“Not a problem, Miss Anderson.”

With his consent, Paula relaxed, placing her
legs across the soft leather seats. She enjoyed the forty-five minute ride to
the resort. Upon arrival a staff was waiting to usher her in.

“Welcome back Miss Anderson. We are honored to
have you here.” Said the concierge. “Imelda will be your host for your stay.”

“You will be housed in the Sunset Shore room,
just as you requested.”

“I appreciate you accommodating me.”

Paula loved the Sunset Shore room because it
gave her the ability to see the most brilliant sunsets in all of Mexico.  Each step down the hall gave her a
sense of freedom.  When she finally
opened the doors to her suite, she let out a huge sigh.  Tipped the bellhop and then flung open
the doors to her patio that was only a stone throw from the private beach.
“Heaven!” She squealed.

Baxter was in a state of anxiety for most of the
day. Roman had made sure of that. He enjoyed being Paula’s assistant but
working with the big boss was an entirely different thing. They had been going
through the Wilson National files with scrutiny preparing for the acquisition.

“We need to work on the 3 year projections for
the account.” Said Roman.

“I believe that Miss Anderson already has that
completed sir.”

“What is our latest status from the Federal
Reserve Board?”

“Then you need to get sure. Where would Miss
Anderson have left that information?”

“I don’t know sir? May I suggest calling Miss
Anderson?”

“Yes, and don’t stop calling her until she
answers.” Roman said. “I will also try to get Maxwell from the Federal Reserve
on the line as well. Maybe she told him something.”

Baxter made sure to stay on top of things for
the rest of the day.  Though there
were lots of frustrations between the two of them. They plowed through the rest
of the Wilson National account and unfortunately had not made much progress.
Maxwell was not a shred of help. Needless to say Roman was not a happy man by
the end of the day. “Has she called you back?”

Paula had enjoyed her day on the beach.  She sat on the shore watching the
sunset and feeling her hair blow in the breeze.  It was just like she had imagined. When the sun faded, she
returned to her room and ordered a meal. She checked her cell phone and was
terribly upset to see 25 calls from Baxter. Refusing to return the call, with
resolution she tossed the phone on the bed.  Then flicked on the TV and sat down to enjoy a large plate
of her favorite Paella and sip her Daiquiri.

Roman arrived at work the next morning fit to be
tied. Baxter did his best to avoid him but it was to no avail. He was really a
pretty anxious guy to start with and Roman’s pressure was not helping him a
bit. He was short, stocky and had slightly receding brown hair. Once Roman
remarked that he reminded him of George on Seinfeld. He had stayed up all night
working on the Wilson National account. In all the mountains of paperwork, that
one Federal Reserve filing could not be found.

On the Mountain by Peggy Ann Craig
The Limping Man by Maurice Gee
Bearing It All by Vonnie Davis
His Christmas Nymph by Mathews, Marly
Tribute by Ellen Renner
The Audience by Peter Morgan
The Alpha Plague 3 by Michael Robertson
Empire Rising by Rick Campbell
Virtues (Base Branch Series Book 8) by Megan Mitcham
Dragonskin Slippers by Jessica Day George