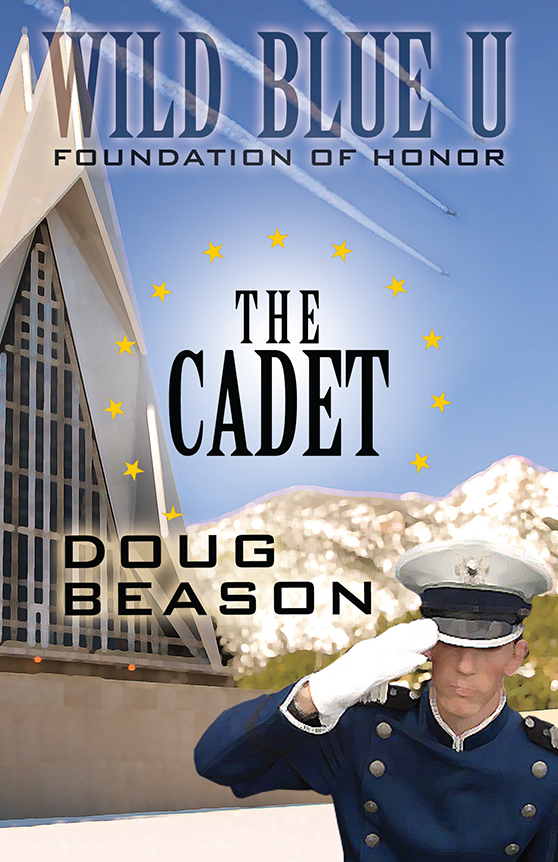 The Cadet
, Book 1 of the Wild Blue U saga, chronicles the founding years of arduous training of America’s future leaders as they prepare to serve in such places from the jungles of Vietnam to the deserts of the Middle East.
The Cadet
is an accurate, historical saga of the Academy based on factual events—but populated with empathetic, larger-than-life characters that will appeal to prospective candidates, military members, and the reading public alike.

To Cindy Beason—who met me when I was a cadet,
married me anyway, and supported me through everything.

The Cadet
is a composite of over 60 years of Academy history, attempting to distill a wide spectrum of experiences that could not have possibly happened to just one cadet in a four-year period. And although this is a work of fiction, it is based on historical figures, events, and locations that are real; however, it is impossible to precisely reconstruct the thoughts and motivations of these historical figures and their actions. As such, the author has taken liberty to dramatically embellish historical events, and does not intend to denigrate—but only highlight and humanize—the significance of their actions. For example, George Delante did not exist; his actions did not occur. As another example, there was only one cadet squadron commander for Third Squadron in 1958; the fictional character portrayed is not related in any way to this person. In addition, only to dramatize the novel, some anecdotes may be out of chronological order or the venues changed (such as the CU mascot liberation; or the Class of 1959’s graduation ceremony being depicted on the parade field, instead of in Arnold Hall due to inclement weather; etc.). The sole purpose is not to make this novel a dry chronicle of historical fact, but rather to show the true excitement of establishing a major American landmark. Finally, there are a few terms and phrases used that may offend present day social mores, but these are only used to reflect the customs and social tones of a 1950s, post-Korean conflict, America.

(Historical figures are denoted by
ψ
)

Blow—To rest, or to “kiss off”

Canoe U—A small, inconsequential school (Annapolis), which forms a suburb of the capital of Maryland with a campus partly on land and partly in the Severn River

CCQ—Cadet in Charge of Quarters

CQ—used in place of CCQ

Doolie—That insignificant whose rank is measured in negative units; one whose potential for learning is unlimited; one who will graduate in some time approaching infinity

FIGMO—Forget It, Got My Orders

Firstie—a First classman, a senior (cadets in their final year at the Academy)

FUBAR—“Messed” Up Beyond All Recognition

GIB—Guy in the back seat

Hudson High—a small, inconsequential school (West Point) on the Hudson River distinguished by over 200 years of tradition unhampered by progress

Nino Baldacci—That individual having entered with the class of ’59 and remaining until the present time never having been off academic probation and never having taken a privilege. He is a perpetual turn-back near and dear to all cadets.

Rock—That superhuman who is free from female entanglements

SOD—Senior Officer of the Day

Two!—A command to return the cadet to what he or she had been doing

Zoomie—That term by which a cadet is commonly known by jealous, and usually inferior, civilians